Visible Man: All the Ways We’ve Made the Invisible Man Visible on Screen

The film also proves that, as far as famous movie monsters go, the Invisible Man can be recreated cheaply, if not always well. All you have to do is provide some indication there’s someone hanging around, be it via a radio floating through the air or a guy choking to death on a submarine sandwich being shoved down his throat by invisible “hands.”

Strange as it sounds, what makes an invisible man convincing in movies often isn’t what viewers don’t see, but what they do. It’s the moments that bring him to light, so to speak, that define invisible man movies. And such moments — whether found in James Whale’s first pass at the Wells story in 1933 or Leigh Whannell’s just-released new take on the character — often loop back to the themes at the heart of Wells’ stories, exposing the bad guy at his worst and proving that no misdeed can stay hidden forever.

Whale’s version, part of Universe Pictures’ classic monster movie cycle, sets a high bar for other invisible man movies to clear, both with its handling of Wells’ themes and its clever special effects. Rogue scientist Jack Griffin (Claude Rains) makes his first appearance wrapped in bandages, wearing dark glasses and a fake nose, claiming to have been in an accident as he seeks shelter at a provincial English tavern. He needs a spot far from prying eyes to continue his experiments with invisibility, experiments he’s been testing on himself. He pretty much undermines any attempt to lay low upon arrival, however — the sight of a man with a hidden face has that effect on gossipy townsfolk.

Griffin doesn’t help himself by leaving his door unlocked at inopportune moments, or by generally behaving like a dick. We never see him before his transformation, and while he must have been sort of charming to romance Gloria Stuart, invisibility seems to have turned him into a first-class a-hole, if he wasn’t one already. The film partly explains this away by suggesting one of the chemicals used in his experiments has driven him insane, but it seems just as likely that his scruples have slipped away as he’s disappeared.

Or maybe it’s just that running around naked tends to make people less inhibited. After all, invisibility only stretches as far as the skin. One of The Invisible Man’s most striking images is of a shirt floating around a room, a sight made all the more memorable by the realization that the giggling Griffin must be pants-free for it to work. And, like many of the film’s effects, it holds up brilliantly. The ways in which Whale and the film’s special effects team realize the Invisible Man’s presence remain as effective as they are clever: When Griffin removes his nose to provide a peek at the hollow space where his head ought to be, it’s still unnerving. Ditto the footprints that seem to appear out of nowhere in the snow.

The film works in part by laying out the rules of invisibility in no uncertain terms. Speaking to an unwilling henchman, Griffin explains he can’t work in the fog or soot and has to wait at least an hour after eating before getting into invisible mischief or else he’d appear as a floating mass of half-digested food. It’s not easy to disappear completely. But those who do find that they can literally get away with murder — at least for a while.

It would take a while for other movies to run with the idea. Universal produced a handful of lesser Invisible Man sequels, then the character more or less faded from view, so to speak. He made a half-hearted (and unofficial) comeback of sorts with Edgar G. Ulmer’s 1960 film The Amazing Transparent Man. An auteur whose past work made a virtue of a low budget, particularly the 1945 noir classic Detour, Ulmer struggles to do anything compelling with the story of ace safecracker Joey Faust (Douglas Kennedy), who’s sprung from prison by an insane army major intent on conquering the world with an invisible army. He needs more atomic material to do this, however, so he turns Faust invisible then sets him loose, only to see the plan backfire.

But can an invisible man be a good guy? That’s a question pondered by the 1972 Disney film Now You See Him, Now You Don’t, then taken up again by 1983’s The Man Who Wasn’t There and John Carpenter’s 1992 film Memoirs of an Invisible Man, starring Chevy Chase. In Now You See Him, Now You Don’t, it’s not much of a question, since it’s college science whiz Dexter Riley (Kurt Russell, in his early All-American gee-whiz mode) cracking the secret of invisibility. Previously seen in The Computer Wore Tennis Shoes and destined to return in The Strongest Man in the World, Dexter and his well-meaning friends mostly use the gift to allow their school’s dean to cheat at golf (it’s for a good cause, though). The film largely conveys invisibility through simple gags involving floating golf balls and, later, an invisible car driven by goons working for a local gangster played by Cesar Romero. And since Dexter’s formula can be sprayed onto any surface, even clothes, there’s no nudity involved. This is a Disney film, after all.

Decidedly not a Disney film: the 3-D action comedy The Man Who Wasn’t There, starring Steve Guttenberg (not to be confused with the Guttenberg-free Coen brothers film of the same name). Rated R and proud of it, the leering comedy casts Guttenberg as Sam Cooper, a low-ranking Washington bureaucrat who accidentally turns himself invisible on his wedding day. This forces Sam to lam it around Washington with the help of one of his fiancée’s bridesmaids, Amanda (Morgan Hart). It also allows him to be a lecherous jerk, flipping up skirts, pinching naked women after he wanders into a locker room and generally feeling great about getting away with it. Director Bruce Malmuth at least gets creative with his smuttiness, at one point revealing Sam’s presence via a make-out scene that finds Amanda appearing to slosh her tongue through the air, then dance naked alone.

Though based on a 1987 novel, Memoirs of an Invisible Man sometimes plays like a remake of The Man Who Wasn’t There, only with Chase in the role of the smirking hero and better special effects. Directed by John Carpenter, Memoirs of an Invisible Man isn’t a very good movie, but it’s clearly an expensive movie, one that explores some of the mechanics of invisibility raised in the 1933 film. Specifically, we finally get to see what it looks like when an invisible man’s digestive process becomes visible, an image that makes Chase’s previously carefree stock analyst Nick Halloway vomit (the vomit remains visible as well). Later, while hiding from an evil CIA agent played by Sam Neill, Nick attempts to order a supply of easy to digest transparent foods, like bouillon and vodka.

An attempt to steer Chase’s career in a new direction, Memoirs of an Invisible Man doesn’t really work, but it looks positively pleasant compared to the next invisible man movie, Paul Verhoeven’s 2000 film The Hollow Man. Taking Wells’ exploration of invisibility and morality and pumping it full of steroids, the film stars Kevin Bacon as Sebastian Caine, a brilliant scientist/walking HR violation with boundary issues even before he successfully tests an invisibility formula on himself. Afterwards, he gets worse, fondling co-workers in their sleep, (most likely) raping a neighbor he’s spied on from afar and menacing his ex-girlfriend/co-worker Linda (Elizabeth Shue).

Verhoeven always enjoys playing with dynamite, but here it blows up in his face in a film that’s more obnoxious than provocative. The Hollow Man is, however, a stunning showcase for all the ways to make an invisible man visible, at times playing like a test reel for state-of-the-art (circa 2000) digital effects. Sebastian becomes less invisible via an outfit of layered clothes and sunglasses — an invisible man classic — but also by way of dye that reveals his internal organs; some fleshy goo applied to his skin; smoke; fog on a mirror; infrared glasses; the spurt of a fire extinguisher; a jet of animal blood; steam from ice; and the spray of a sprinkler system. “It’s amazing what you can do when you don’t have to look at yourself in the mirror anymore,” Caine says at one point. Yet The Hollow Man keeps finding one way then another to make sure he has to reflect on his image. In a subtler movie, this might even have been used to make a point.

Three years later, an invisible man made an appearance in The League of Extraordinary Gentlemen, a loose, dull adaptation of Alan Moore and Kevin O’Neill’s comic book series uniting the heroes of famous golden age pulp, science fiction and horror stories. Unlike the source material, however, the film eschews the original Invisible Man in favor of a thief who’s stolen his formula. In the process it both loses Moore and O’Neill’s true-to-Wells characterization of the Invisible Man as an amoral psychopath, and the character’s memorable (to put it mildly) death at the hands of Mr. Hyde. (Well, not exactly the hands. If the film had stayed true to the original League it would have struggled to keep an R-rating.) It turns out that even an Invisible Man’s blood turns visible after death, as Hyde’s League teammates find out after he joins them for a post-murder meal. 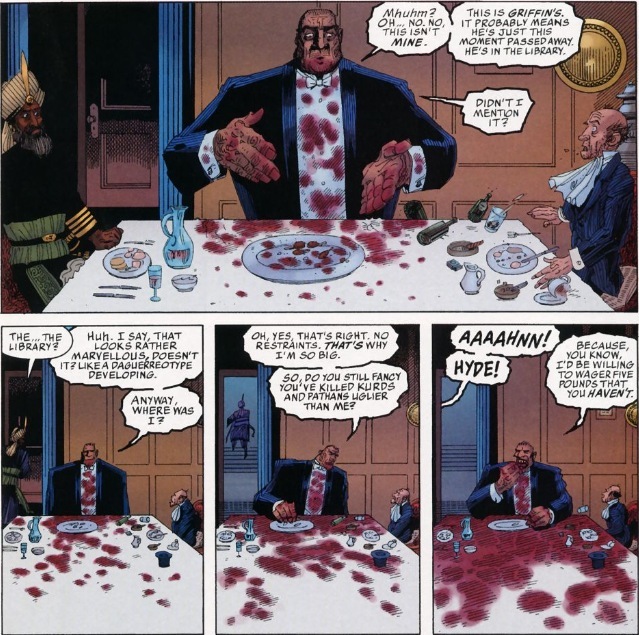 Meanwhile, widely disliked (even though it inspired a direct-to-DVD sequel starring Christian Slater), The Hollow Man scorched the earth for Invisible Man stories for a while. The character was at one point destined to return, played by Johnny Depp, as part of Universal’s Dark Universe cycle. That project’s collapse after the failure of The Mummy paved the way for Whannell’s new take on the character, which breaks with tradition in several ways, including keeping the Invisible Man really invisible for much of the film.

Elisabeth Moss stars as Cecilia Kass, the abused partner of super-scientist Adrian Griffin (Oliver Jackson-Cohen), who escapes his clutches and tries to hide. When Adrian appears to kill himself, leaving her a fortune in the process, she starts to rebuild her life, until strange things start to happen around her: items that inexplicably disappear, a grease fire that comes out of nowhere, quilts that slide off the bed in the middle of the night. Though the film features some classic touches like floating knives and fight scenes with invisible partners, some of its most effective moments involve scenes in which Cecilia starts to realize she’s not alone, and Whannell lets the camera linger on open space that may or may not contain her tormentor.

Eventually, Cecilia starts to find ways to fight back and make Griffin reveal himself, ways better left unspoiled. But the film’s all the scarier for not revealing her abuser for so long, and by having him use his abilities to transition into gaslighting, passive aggression, social isolation and other heightened forms of familiar torment. He’s the ultimate realization of an everyday monster, using his ability to go unseen to continue breaking down Cecilia’s life for his own amusement in ways hidden from those who care about her.

After all, what you can’t see can hurt you, whether it’s a madman cackling his way through the English countryside, or the manipulative monster who keeps his sadism hidden.