On Tudder, the ‘Tinder for Cows,’ Courtship Is a High-Steaks Game

Meet Black Sion. He has shiny black hair, kind eyes and a body that’s built for pleasure — ready to father up to 50 children as early as tomorrow

Black Sion, grandson of Porterhouse, is an arrestingly beautiful, 2,000-pound bull living in the lush green hills of Denbighshire, England. He has shiny black hair, kind, knowing eyes and a body that’s built for pleasure. On that last count, per Seth Wareing, the business director of the farm where he lives, he’s ready and available to father up to 50 cattle children, as early as tomorrow.

You’d never think an absolute unit like him would be single, but alas, he is.

“Matching livestock is actually more relevant to an online app than matching humans is,” says Doug Bairner, CEO of Hectare Agritech, the company behind Tudder. “There’s a huge amount of genetic and statistical data about livestock that tells you whether you’re looking at a good match or not. It all just depends on what you’re trying to breed for.” 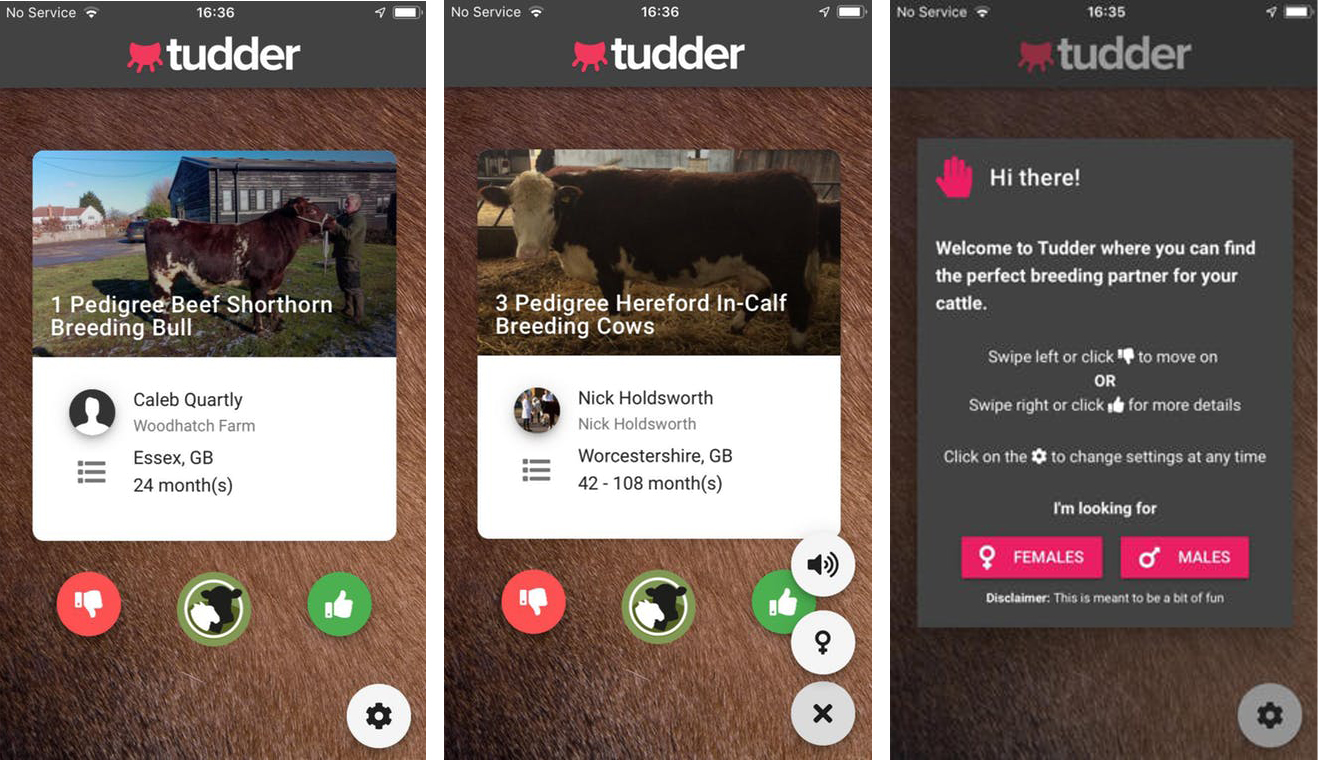 Most often, farmers are looking for comparably sized bulls and heifers whose passionate union will lead to sustainable birthing genes — mix a monstrously large stud with a pint-sized heifer, and you might create a dangerously XXL Franken-calf too big for mom’s birth canal. Along those lines, proteinous, high-fat milk and a docile demeanor are desirable traits for dairy cows while a large, meaty body that can be transformed into high-yield steaks and burgers is the name of the game for beef cattle. Black Sion’s claim to fame, however, is his temperament. “He’s very calm and is good for breeding replacement females [a fertile cow that produces a calf every year for a long time],” says Wareing. “He will help round out any herd that has flighty heifers or calves that are too big for their mother’s birth canals. He’s not fussy and will be happy with any female who will have him.”

The question is whether those females will be happy with him. With more than 20,000 eligible cows listed on the app — a cattleforce that occupies over a third of U.K. farms — there can be quite a bit of competition for both ladies and gents. Bovine daters have to do everything they can to stand out, and nothing makes a profile pop more than a digitally enhanced photo and a catchy bio that showcases both pedigree and personality. Profile descriptions range from sexy (“Powerful with good shape. Excellent feet and legs. Very quiet”) to sexier (“Great natural flesh and structure with an outstanding temperament”) to sexiest (“Redwater immune mineral bolused lepto bvd vaccinated”), and farmers can filter their results by whether a cow is organic or from a farm where tuberculosis was detected.

Once they find a cud-chewing quadruped that catches their fancy, they can swipe left or right. A left swipe elicits the sound of a cow’s irritated bellow from the app, while a right swipe ruptures your eardrums with an ecstatic taurine squeal. In addition to being serenaded with cow mating sounds, your right swipe will direct you to SellMyLivestock.com, an online marketplace for farm animals and materials. You can slide into the DMs of the desired cow’s owner and arrange a date from there.

Exactly what happens on these dates is no business of yours or mine, but Bairner says cow courtship tends to work a little differently from human dating. Instead of sharing an awkward post-Olive Garden fingerbang with a single suitor, bulls immediately move in with an entire herd of heifers (usually about 50 to 60 at a time), impregnating as many of them as they can before they’re whisked off to their next romantic encounter just a few short weeks later.

Unfortunately for Black Sion, he hasn’t had much of an opportunity to play that dating game. Despite being in the “top 25 percent of his breed,” acing his sperm count test and displaying a satisfactory libido, he’s still waiting patiently for Miss Right to swipe in his direction. “It could be due to his profile pic, which doesn’t show him off in the best light,” says Wareing. “But if someone gave him a shot, I know they’d be happy with him.”

Until then, he’ll be waiting patiently.