The Worst Treats People Actually Got on Halloween Are Legit Horrifying

From a raw potato to a dead goldfish, cyanid isn’t looking too bad

To this day, one of the happiest moments of my life was getting a full-sized Toblerone while trick-or-treating in a rich neighborhood, trekking from my native Queens to Great Neck (or basically, Gatsby’s West Egg). I don’t even like Toblerone, but it made me feel like Lil’ Orphan Annie, finally escaping my shitty life, if only for a moment.

But I’m mostly a black-hearted bitch, so what I remember even more than full-sized candy bars are the petty vendettas I have against those who handed out treats that were worse than any trick: Smarties, Necco wafers, boxes of fucking raisins and especially those goddamn peanut butter-flavored taffies wrapped in orange and black wax paper. FUCK THOSE THE HARDEST. If my teeth are going to fall out, it’s going to be on something good like a Sugar Daddy or Milk Duds. Spare me your toothbrushes and floss, your pennies and cheap school supplies and shove them straight up your ass instead. Look at this sad clown, hadn’t she been through enough?!?! 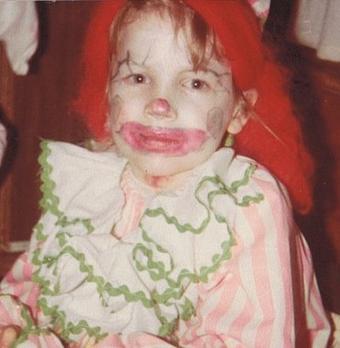 The absolute worst thing I ever got, though, was the time I was offered a bowl of Christmas-colored ribbon candy and told to take just one piece, a warning so absurd, I remember thinking in my little head, “Seriously, bitch?” The candy looked about 15 years old and was more cat hair than sugar. The horror I felt when I lifted a single piece only to have the whole jumble of ribbon candy rise was scarier than anything I’ve ever seen in a horror film.

Now, at least in the case of the ribbon candy, I’d clearly stumbled across some flake who had forgotten it was Halloween. In my opinion, if you forget it’s Halloween, you should just turn off your lights and go to sleep. Don’t take it as an opportunity to declutter; after all, Halloween isn’t an episode of Hoarders. Yet, according to an informal poll (that, you know, I put together), if you go to a flake’s house, you might get any of the following: cough drops, a handful of loose Cap’n Crunch, fast-food condiment packets, an unwrapped Whitman’s Sampler chocolate, Carnation Breakfast Bars, Ramen noodles, a square of Jell-O in a Ziploc bag and a packet of Swiss Miss Hot Chocolate Mix with a nickel taped to it.

Still, I couldn’t leave it at that. Because not only is my heart black — and my grudges forever — but flakers have an excuse (i.e., they totally spaced on it being a “holiday”). What of the people who hand out shitty treats BY DESIGN? And worse yet, believe they’re anything but SHITTY (people and treats)? To paraphrase Tolstoy, all good treats are alike, but all bad treats are bad in their unique way. And so, I sent out a clarion call for the worst Halloween treats people have ever received. I couldn’t have loved more the horror of it all.

For instance, Joby, a 45-year-old in New Orleans, grew up in Northern California and had a particularly hippie NorCal trick-or-treating experience. “A guy opened the door, apologized for not remembering, picked berries off a vine climbing his house and dropped them straight into my bag,” Joby tells me. “I was using a pillowcase, which was a totally stained, jammy mess at the end of the night.”

Moreover, multiple people claimed they got a potato while trick-or-treating. I mean, who the hell gives a child a potato? It sounds like some sort of Irish tradition, where children are convinced a potato is special so they don’t realize they’re poor, like when my mom told me that my mismatched thrift-store socks were funky. Redditor JZweibel’s potato man at least had an excuse: “I once trick-or-treated at the house of a recent immigrant who had no idea what the hell Halloween was. My parents explained it to him, and he retreated into his house. When he returned, he was holding a gigantic, gnarly-rooted potato.”

Speaking of questionable foodstuffs, there are apparently scores of people who haven’t gotten the memo about razor blades and cyanide fears and are giving out unwrapped food willy-nilly. Hot dogs are particularly popular — from uncooked wieners, to cold dogs in buns, to chili dogs with all the fixings. Thirty-seven-year-old Corridomi from California also tells me that she once got a cheese sandwich. “It was white-ass bread and a Kraft single. Hell, I wanted to eat it as a husky 10-year-old, but my parents swore there were drugs in it.” (Memo to your parents: No one is giving away free drugs, unless it’s by accident.)

Still, things can get far more deadly. “The guy at the end my block owned the pet store in town and would hand out goldfish in bags full of water,” writes one redditor. “I remember I was so psyched to get it, but of course, half the kids had a dead goldfish when they got home, and the other half had a dead fish by morning, leaving a town of hysterical, traumatized kids.”

That (and all the evil spirits obviously) is why so many of the religious do-gooders in the neighborhood use Halloween to proselytize, forgoing candy for crappy prayer cards, Jack Chick Tracts and other useless religious paraphernalia. “One year, I got one of those really small, pocket New Testament Bibles,” says 39-year-old Danny in Puerto Rico. “I was about eight and remember the old lady telling my mom, ‘There’s still time to save him!’ The 1980s were wild.”

How wild, you ask? Allow this redditor to answer: “A girl I went to high school with proudly posts every year that she hands out little mini-constitution scrolls.” What a dork. I prefer the pamphlet graphically showing how abortions are performed.

In fairness, Christians aren’t the only ones evangelizing on Halloween. Several people mentioned getting fast-tracked into feminism and the wonderful world of menstruation while trick-or-treating. (Maybe they were going for a Carrie thing?) “I got a ladies’ personal hygiene kit that had maxi pads in it. I was 8!” 35-year-old Victoria tells me. Angel, a 47-year-old from Arizona, adds, “A friend and I had OB tampons tossed into our bags. We were in her room pretending they were cigarettes when her mom walked in and ripped them out of our hands.”

As I mentioned earlier, an expert-level trick-or-treating strategy is to leave your shithole neighborhood and go to a rich one. It definitely can pay off, but as we know by now, rich people shouldn’t be trusted either. For every full-size Snickers bar you get, there’s something similar to what redditor treepig experienced: “I went trick-or-treating at Steve Job’s house in Palo Alto once and got a fucking Odwalla bar. LOL. I tossed that shit in their yard.”

It gets, um, shittier. ”I used to go to a fancy neighborhood to trick-or-treat, and without fail, there was always one house that handed out individually wrapped rolls of toilet paper that they’d personally wrapped with a festive paper,” says 30-year-old Katy from Kentucky. I can’t decide if this was an attempt at being good-natured about your house eventually being teepeed by the proletariat, or if they feared that poor children would be shitting in the streets at some point that night. Either way, WTF?

And yet, it can be so much worse — much, much, much, much worse. “There was a wealthy house that invited children in, had us sign a guest book and gave us warm apple cider and baked goods, as well as candy,” explains 44-year-old Chuck in New Jersey. “When I was an adult, the husband was found guilty of molesting his son’s friend for years and is now a registered sex offender.”

All of a sudden a stale popcorn ball and junk-drawer fortune cookie doesn’t seem so bad. At least they don’t lead to years of therapy and trauma bonding with bad men.