The Real Reasons Movie Concessions Cost So Much

Once upon a time, older generations tell us, going to the movies was considered a cheap date. The ticket, the snacks, the drinks: All modestly priced in the single digits. But the movie experience these days? Goddamn! It’d be cheaper to take a date — or indeed, a family of four — out to dinner. Tickets are routinely over $10, even for kids; a small-size popcorn that costs less than $0.50 to make is usually more than $6. Nachos: $7 or so (the ensuing diarrhea is free, however). Drink-and-soda combinations can be $14 or more. Put it all together and you’re looking at around $100 for a family of four just to go see the latest sequel in an undistinguished line of loud, plot-free superhero bullshit.

Seriously, where does all this money go for 120 minutes of empty-calorie entertainment (and empty-calorie snacks), you ask? Let’s it investigate. Take it away, Martin Lawrence:

So Who Gets What in a Movie Ticket?

Yes, ticket prices vary based on age, time of day, theater, etc., but let’s assume, for this exercise, a $12 movie ticket. Pretty standard these days, assuming you’re not seeing an IMAX movie or going to a theater with La-Z-Boy seats and a full bar in the lobby (in the latter cases, please, take all my money!).

Anyway, of that $12 ticket, most every movie studio — from the one that made the latest Avengers movie that leaves kids crying at the end to the one that made the latest Star Wars sequel that leaves alt-right trolls crying at the end — gets about 60 percent, or $7.20 of your ticket. This split can change, as each movie is negotiated differently with theaters. A while back, studios would take a huge cut (as high as 90 percent) in the first week or two, then the theater would take an increasingly larger cut as the weeks went on. Whatever the arrangement, it generally works out to about 60 percent for the studio these days.

What Does the Studio Do With It?

About $1.20 (10 percent of your ticket) goes to distribution costs, $0.96 (around 8 percent) goes to the talent, and as much as $2 goes to production (those huge budgets you always read about don’t pay for themselves). That still leaves about 25 percent of your ticket. Any guesses where this goes? Marketing! Every TV ad, YouTube trailer, radio spot, celebrity guest appearance and promotional tie-in is paid for by one-quarter of your movie ticket, all to get you to see a certain movie. It’s commonly said that studios spend more marketing dollars on the turds than the good movies, in order to mitigate the losses when the movie gets savaged by critics and word-of-mouth.

What about the other 40 percent?

That goes to the theater. It might sound like a lot — all they’re doing is dimming the lights and pushing play, right? — but it’s the theater that’s bearing all the overhead: Rent, electricity, the Siberian-tundra-like air-conditioning systems, plus the minimum wages of the bored teenagers who tear tickets, scoop popcorn and mop up soda spills. Don’t forget, though, that theaters are upgrading all the time (nicer seating, increasingly deafening audio systems, 3D projectors, children’s playgrounds… all to get people off their sofa and away from Netflix), and they pay for all that themselves. Because even with $4.80 of every movie ticket, the movie theater business isn’t all that lucrative: The profit margin is around 4 percent. It’s not exactly Bitcoin circa 2017.

How Does A Theater Make Money, Then?

As you no doubt guessed, the fattest line in that thin, 4 percent profit margin is the concessions. It’s the most important part of a cinema — one that no theater is without. In fact, 40 percent of a theater’s profit is concessions! It’s why every movie concession stand is big, bright and tends to take up the whole lobby. It’s literally impossible not to walk by it — or at least to notice it — on your way to your theater. That’s, of course, by design.

So What’s the Profit Margin on Concessions?

Are you ready? Eighty-five percent! (You will probably not be shocked to learn that popcorn, fizzy sugar water or packaged sugary snacks are inexpensive to produce.) It’s why, for nearly 100 years, theater owners have said things like, “We’re not in the movie theater business — we’re in the popcorn and candy business.” Or: “Find a good place to sell popcorn and build a movie theater there.” Since, as with airports, the customers are a captive audience, theaters jack up the price of concessions as high as they can (except for those of us — I mean, those terrible people who are definitely not me — who sneak in their own food and beverages). 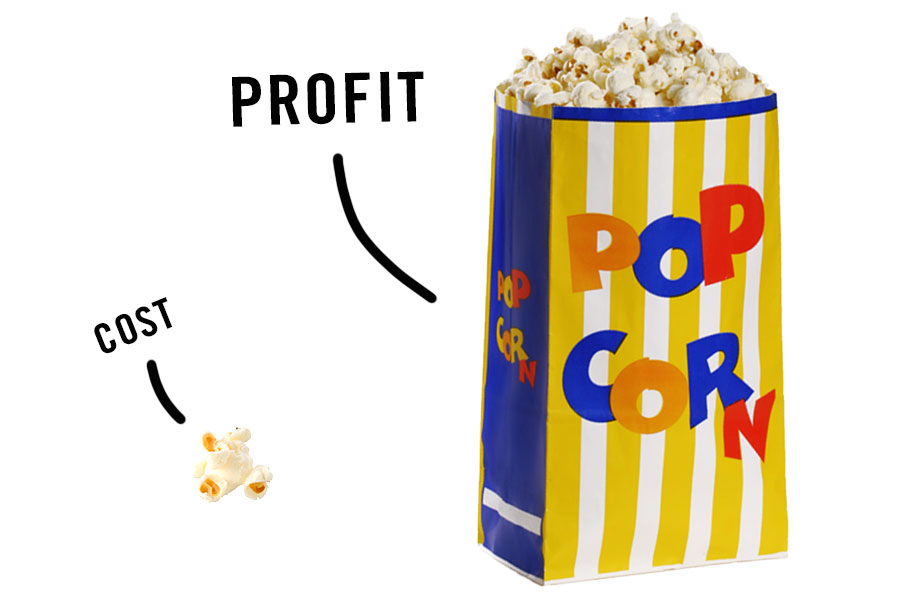 Technically, Then, My Stuffing Myself with 1,030 Calories Worth of Popcorn Is Actually Helping A Local Business Stay Afloat?

But wait, there’s more. The economics of movie popcorn are pretty fascinating. Movie concessions are a way for theaters to price discriminate, an economic term that means charging different people different amounts of money (as insidious as this sounds, pretty much every business aims to do this, to get the maximum amount of money from each customer). In the real world, this means that wealthier people will spend more money at the theater by buying snacks and drinks; people on dates tend to spend more, as is expected on a date, and will likely buy concessions; same with families. These people basically get charged “extra” for a movie.

Let’s Not Forget That Bucket of Soda.

Let’s not! Popcorn isn’t only a perfect sales tool, it’s a heavenly creation of junk-food symbiosis. It’s crazy cheap (look at this bag — it’s 175 cups of popcorn for $48, which comes to around $0.27 per cup), and it’s also fatty and salty when you add butter and salt. And what does fat and salt (as well as sugar, in the case of candy) do to you? It makes you thirsty, of course, because all those things suck water from your cells. Can’t have one without the other! And though plenty of people go to the movies and only buy a soda, those who get popcorn and a soda can choose from combos that are priced juuust right: They’re discounted enough to make it sensible to buy both instead of just buying one or the other, if you were even thinking about just getting one.

Is That Why Theaters Are Often Filled with Movies That Cater to Adolescents, Teenagers or Families?

Possibly, since the most common concessions tend to cater to the same types of people. Viewed this way, at movie theaters, the choice isn’t exactly concessions v. no concessions, it’s concessions v. a lot of concessions! And that’s exactly the way movie theaters want it. So next time you get your wallet emptied out by a trip to the movies, just remember: All those savages around you who obnoxiously crinkle their candy wrappers, spill their drinks, slurp their empty sodas or chew their popcorn like a beast are at least helping to make the price of your movie cheaper.