Ryan Reynolds becomes a video game. Tom Hanks is the last man on Earth. More importantly, no remakes, no sequels, no superhero movies.

When you put together a preview of the year’s most-anticipated movies, there’s always a fair amount of guesswork involved. That’s even truer when you limit yourself to projects that aren’t based on anything — no Marvel films, no sequels, no reboots, no films inspired by true stories, no literary adaptations. But looking back at my picks for 2019’s most intriguing original movies, I’m pretty pleased with my powers of prognostication. Three films (Uncut Gems, The Lighthouse and High Life) ended up on my Top 10 of last year, while other movies like Ad Astra, Queen & Slim and Midsommar were adventurous, argument-starting affairs. (And a couple others, Knives Out and Us, have emerged as awards contenders.)

So how does my 2020 list look? Well, once again I can only speculate. But I’m excited that Pixar is unveiling two original films this year, and that A-list directors like Christopher Nolan and Spike Lee are back. And I’m going to remain optimistic that the Ryan Reynolds video game movie could be funny. Hope springs eternal this time of year — despite the likes of Top Gun: Maverick, Black Widow and Fast & Furious 9, Hollywood is still sometimes willing to take a chance on ideas that aren’t straight-up I.P. plays. Such as these 10 upcoming releases…

What It’s About: Two teen elf brothers go on a mystical journey to try to reunite with their father, who died years ago.

Why You Should Care: In recent years, Pixar hasn’t lived up to its former glories — although it’s still pretty damn great — and part of the reason is that the studio has been focusing on pre-existing franchises. (Five of Pixar’s last eight movies were sequels or prequels.) Onward is an exception, which poses a risk. There’s a built-in audience for Toy Story 8, but will moviegoers flock to what looks like a tale full of magical beings that no one has heard of?

Still, you can’t fault the voice cast, which includes Tom Holland, Chris Pratt, Julia Louis-Dreyfus, Octavia Spencer and Ali Wong. I’ll confess that the Onward trailers haven’t blown me away, but I’ll keep believing in Pixar until its filmmakers prove me wrong. (Put it this way: I even like The Good Dinosaur.)

What It’s About: According to IMDb, “A musician who has lost his passion for music is transported out of his body and must find his way back with the help of an infant soul learning about herself.”

Why You Should Care: Like I mentioned earlier, Pixar actually has two original films out this year, with Soul coming to theaters three months after Onward. Soul is directed and co-written by Pete Docter, the guy behind Up and Inside Out, and it’s the first of the studio’s movies to feature a predominantly African-American ensemble. (Outside of Frozone, Pixar just doesn’t have many black characters to speak of at all.) Of Pixar’s 2020 releases, Soul looks more promising — it’s got serious Inside Out grab-a-hankie vibes — and it’s positioned right at the heart of summer movie season, with a voice cast that has everyone from Jamie Foxx to Questlove to Phylicia Rashad to Tina Fey. Outside of Spider-Man: Into the Spider-Verse, black-driven mainstream animation has been virtually nonexistent of late. Soul could change that.

What It’s About: A regular guy, played by Ryan Reynolds, realizes he’s a background character in a video game, deciding that he wants more from his life and becomes a hero.

Why You Should Care: Free Guy’s trailer lays out the movie’s clever, Truman Show-esque premise well, and you couldn’t ask for a better actor as your lead than Reynolds, whose combination of sincere and sarcastic is perfect for a story this cheekily meta. The big question is where the movie goes after its first act — is it just a standard, action-packed blockbuster from there? Or does the wit and inventiveness continue? Director Shawn Levy (Night at the Museum, Real Steel) isn’t necessarily a guy you think of when you want smart, cutting-edge action movies. But I’m hoping that a supporting cast that includes Jodie Comer, Lil Rel Howery and Taika Waititi will help.

What It’s About: Good luck figuring that out. Here’s how Tenet’s writer-director described his hush-hush movie: “We’re jumping off from the point-of-view of an espionage film, but we’re going to a number of different places. We’re crossing a few different genres in a hopefully exciting and fresh way. … We shot in seven countries, all over the place, with a massive cast and huge set pieces. There’s no question, it’s the most ambitious film we’ve made.”

Why You Should Care: Because it’s the new film from Christopher Nolan, who looks like he’s very much operating in Inception mode for this thriller, which stars John David Washington, Robert Pattinson, Elizabeth Debicki, Michael Caine and Kenneth Branagh. Alongside Quentin Tarantino and Paul Thomas Anderson, Nolan is one of the few major Hollywood filmmakers who often works with original material. Expect the usual brainy, sleight-of-hand storytelling, as well as the typical putting-on-a-show spectacle we’ve become accustomed to from the man behind the Dark Knight trilogy and Dunkirk. Every film-bro you know is already salivating for this potential summer blockbuster.

What It’s About: Per Deadline, “Barb and Star Go to Vista Del Mar tells the story of best friends Barb and Star who leave their small Midwestern town for the first time to go on vacation in Vista Del Mar, FL, where they soon find themselves tangled up in adventure, love and a villain’s evil plot to kill everyone in town.” 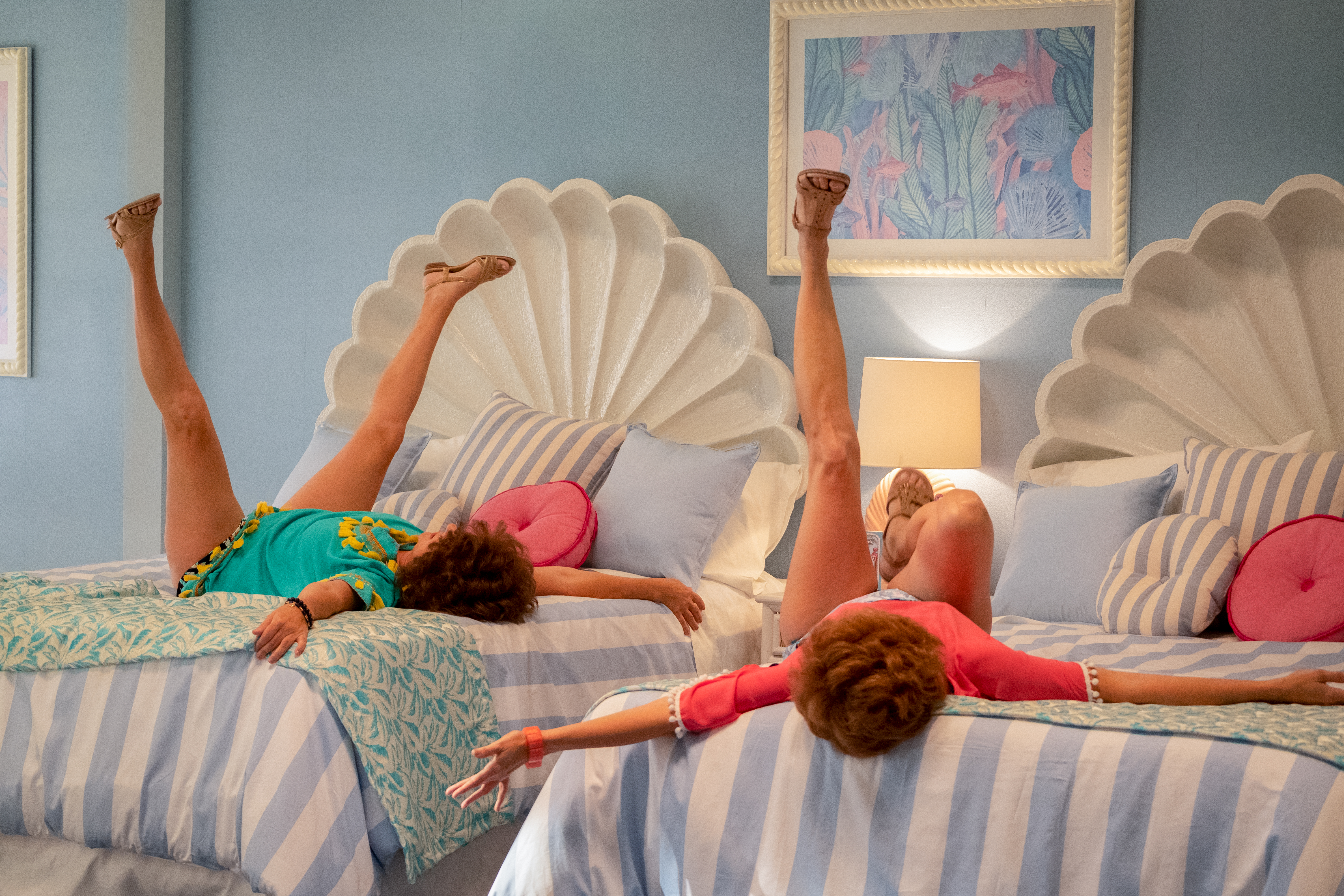 Why You Should Care: Barb and Star are played by Kristen Wiig and Annie Mumolo, who were Oscar-nominated for their Bridesmaids screenplay. This is their first big project since that movie, and the hilariously cryptic trailer that played in theaters over the holidays actually isn’t available online. Clearly, Lionsgate wants to build buzz — not just by keeping the trailer off the internet but also by leaving Barb and Star’s identity secret for now. (Even the film’s promotional stills are purposely vague.) All I can say is that I laughed really hard at the Barb and Star clip, which seemed to indicate that they’re fussy middle-aged ladies ready to let loose. All I know for sure is that Bridesmaids is one of the best comedies of the last 10 years. Here’s hoping this new movie is a worthy successor.

What It’s About: The plot’s being kept under wraps, but it’s supposedly a psychological horror movie set in London. “I realized I had never made a film about central London — specifically Soho, somewhere I’ve spent a huge amount of time in the last 25 years,” filmmaker Edgar Wright said early last year. “With Hot Fuzz and Shaun of the Dead you make movies about places you’ve lived in. This movie is about the London I’ve existed in.”

Why You Should Care: Wright is a beloved cult figure, but his last film, Baby Driver, was an honest-to-god breakout smash. With Last Night in Soho, though, it definitely sounds like he’s drawing from some of the same old-school genre influences that inspired films like Shaun of the Dead. Specifically, 1960s and 1970s British horror — think moody chillers like Don’t Look Now — seem to be his reference point. Wright hasn’t made a horror movie since Shaun, but Last Night in Soho could be less cheeky and more unsettling. Considering that Wright is a talented filmmaker who can get way too cute for my taste, I’d love to see him go dark for his latest.

What It’s About: Welcome to the post-apocalypse! Apparently, Tom Hanks will play the last man on Earth: an ailing inventor who builds a robot who will care for his beloved dog after he dies.

Why You Should Care: BIOS definitely recalls Cast Away, except this time Hanks has a robot and a dog instead of a volleyball to hang out with. (Caleb Landry Jones will be playing the robot in a role that’s supposedly motion-capture.) Hanks may be America’s Favorite Actor, but he keeps pushing himself in interesting directions. (He’s awfully good, and a little subversive, as Fred Rogers in A Beautiful Day in the Neighborhood.) I’m curious to see how he acquits himself with this movie’s bleak-future-world scenario. (It’ll probably turn out better than Cloud Atlas did.)

What It’s About: I’ll let Netflix’s Twitter feed do the heavy lifting here:

Why You Should Care: Spike Lee has had more commercial ups and down than just about any major American filmmaker of the last 30 years. He’s up again thanks to BlacKkKlansman, which won him his first competitive Oscar and was an art-house hit. Lee returns with what looks to be an action-adventure movie with political and cultural overtones — sort of like Triple Frontier but way smarter. The cast is really impressive, and Lee’s had a good track record with Netflix — he did a TV remake of his own film She’s Gotta Have It for the studio — so here’s hoping Da 5 Bloods delivers. After all, he hasn’t made a traditional action-thriller since Inside Man, one of his most crowd-pleasing films. Can’t wait to see him and Chadwick Boseman team up.

What It’s About: According to a press release from Fox Searchlight, the film is “a love letter to journalists set in an outpost of an American newspaper in a fictional 20th-century French city and brings to life a collection of stories published in The French Dispatch magazine.”

Why You Should Care: It’s the new film from Wes Anderson, which is either an enticement or turnoff at this stage of his career. Look, you’re either down with his quirks or you’re not, and his latest stars Benicio Del Toro, Frances McDormand, Jeffrey Wright, Adrien Brody, Timothée Chalamet, Léa Seydoux, Tilda Swinton, Mathieu Amalric, Owen Wilson and Bill Murray. So plenty of Anderson regulars, as well as a few new faces. But after the negative reaction to his previous film, Isle of Dogs — specifically, the accusations of cultural appropriation — I’m curious how, if at all, Anderson will respond with The French Dispatch. What’s for sure is that viewers and critics alike will be going into the new movie with that controversy still very much on their minds.

What It’s About: A heavy metal drummer begins to lose his hearing, forcing him to enter a community for the deaf.

Why You Should Care: Sound of Metal was one of the happiest discoveries at last year’s Toronto Film Festival, earning rave reviews for Riz Ahmed’s terrific performance as a drummer and former addict who must come to terms with his new life. Director and co-writer Darius Marder navigates one of the most clichéd cinematic genres — the addiction drama — and comes up with something piercingly real and moving. Ahmed has been doing great work for years (Nightcrawler, The Night Of), but he’s crushing in this role, while Marder opens our eyes to the reality of going deaf. (The film even includes closed-captioning to make that reality plainer.) Amazon picked up Sound of Metal at Toronto, but the studio hasn’t announced a release date yet. Whatever weekend it comes out, it’ll be the best film in theaters.