Is it art, or is it fetish? Even the so-called morphing community doesn’t always agree

Not long after I shared a piece I’d written for MEL about female steroid users, an elderly Facebook friend responded with his own “contribution to the discussion.” Namely, this image:

The thread on the Facebook page where the image appeared was weird enough, with many commenters debating whether or not this obviously photoshopped image had been re-touched, but the enthusiasm with which my friend presented the image was even more disturbing. Vanessa Adams, a professional bodybuilder, responded curtly to the original poster on my page, noting that “it’s amazing how upset people get when confronted with an obviously shopped image, like you’ve kicked their dog just by existing.”

That modified photo, Adams explains, is one of many “muscle morphs” that circulate on forums, websites and social media sites like DeviantArt. Her attitude toward “morphers,” a subset of “muscle worship” fetishists, is negative. “How cracked does your fetish have to be that you embellish on a reality that freaks out most people in the first place?” she asks.

My own attitude, however, was steeped in ignorance: I had no idea that this community existed at all. I assumed I knew a good deal about fitness and body-oriented subcultures, having written about everything from camming to erotic wrestling and taken deep dives into inflation, gaining, feeding, fursuiting, disguise playing and so on. I even knew a fair bit about the artwork of bygone physique illustration legends like Tom of Finland and Gilbert III, as well as the male “bara titties” phenomenon as it related to anime and manga characters. But it never occurred to me to think about muscle morphing and muscle art since, aside from seeing an occasional oddball photoshop like the one my friend had posted. The idea that there was a market for such material had simply never crossed my mind.

Even then, though, I was still thinking in very general terms. “There’s a difference between illustrated ‘fem muscle art’ and just morphing a picture of a female bodybuilder or normal-sized woman,” a muscle worshipper named Quinn tells me. “The former is considered ‘artistic,’ even highbrow, while the latter is despised and usually lowest-common-denominator material.”

Quinn directs me to websites such as LH-Art, Amazonias and Amy’s Conquest. Each features lavishly illustrated stories in which enormous women pulverize or overpower men who range from massively muscled themselves to obvious Mr. Puniverse contenders. And while LH-Art and Amy’s Conquest might boast Web 1.0 production values, they appear to be generating revenue for their creators in the form of video, PDF and even subscription sales. 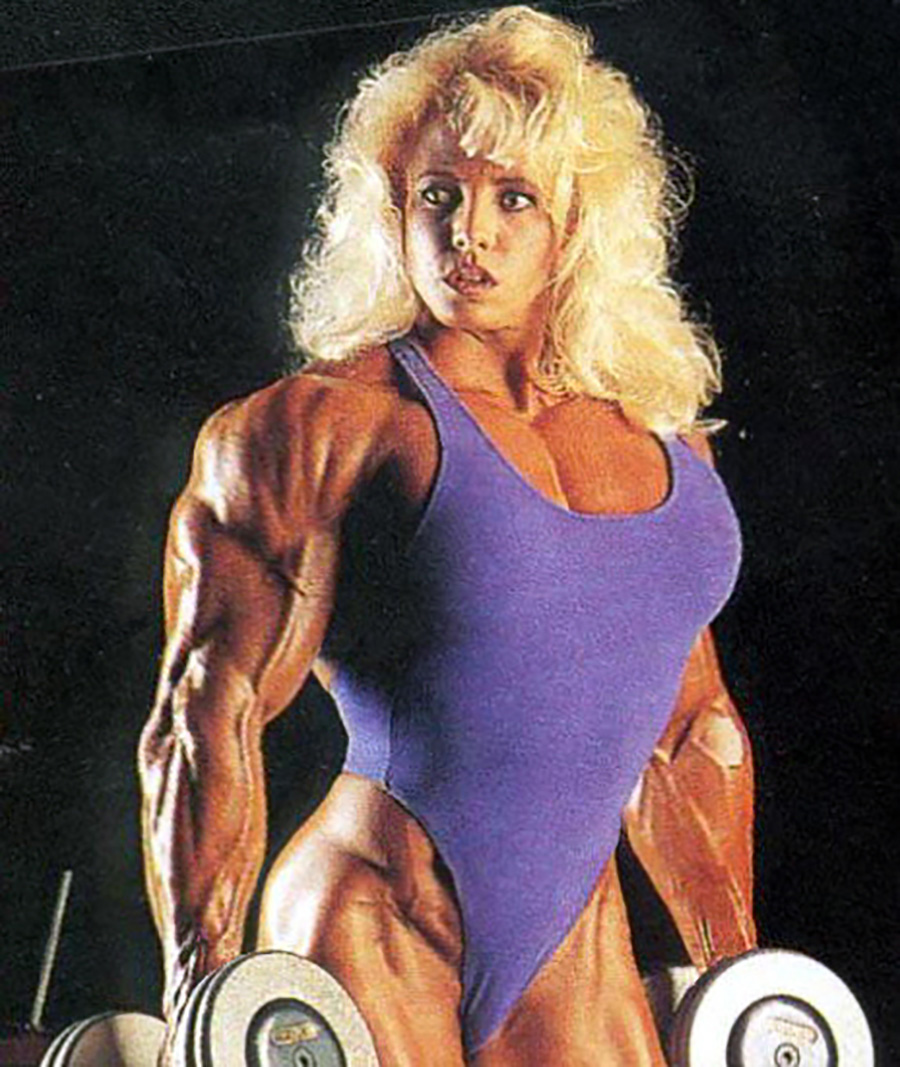 CG Man, who commented that the above DeviantArt morphed photo of Tonya Knight was “excellent,” explains to me that he enjoys “fantasizing about make-believe female muscularity,” and that such photos are “tasteful,” even if they’re “out of the realm of the possible.” Jack Derril, who also commented on the Knight post, adds that “it’s cool that women pursue mass, but I’m interested in shopped jobs.” He also says he’s simply a “hobbyist” who enjoys “making and morphing great bodies as a fun way to pass the time.” Neither see anything wrong with manipulating a real-life person’s image, particularly a woman who might already be facing marginalization for her actual muscular physique. “Art is for everyone,” Derril says. Therefore, he “doesn’t criticize anyone’s art because you should do your own thing.”

zjefvanutsel’s ludicrously distorted morphs are often accompanied by lurid, fan-submitted stories, such as one from a commenter named GymRat1964 who rhapsodizes about how “the female Sex (or F***) Warrior can pump her muscles and control blood flow to harden her abdominal and vaginal muscles to form a granite hard wall of muscle (Think Bruce Lee tightening his body) which is pitted against the massive hard, muscular striated ‘member’ as the male warrior or female with strap on bangs into her from behind and into her core.”

Several other fans of zjefvanutsel’s shared similar sentiments, referencing strap-on phalluses or other appendages. One such fan, Rodman1983, observes that “this sort of muscle thing can bleed over into futa [or futanari, a pornographic anime/manga genre showing characters with swapped male and female genitalia, or having both at once, or other such modifications]. Hard to keep it straight, but once you start swimming in these waters, you see it’s all part of the same stream,” he writes to me.

I’d been expecting at least some engagement with irl issues related to gender and sexuality, but that was almost totally absent from the responses I received. Case in point: User snapdragon451 says he looks at photos like Edinaus’ “Muscular Model” solely to improve his photoshop skills, which he admits are still lacking despite years of “advanced study.” For him, the images aren’t really all that sexually arousing, and bear no relation whatsoever to reality; they exist on a world wide web divorced from the “in real life” plane on which most of us live, love, labor and die. User BermidusSin adds that he “only finds morphed images exciting” but “couldn’t get off to cartoons or comics,” which are “too fake.” And in any case, the morphs “help me satisfy myself. Then I drink a can of Monster, fall asleep and not hate myself for wasting the day like that.”

Besides, BermidusSin writes, issues of gender and sexuality as they play out in the real world are “beyond irrelevant” since “only the pics matter” because you can accumulate enough of them by storing them on your DeviantArt profile, creating a “spank bank that will tide you over for a good long time.”

Another user, who didn’t want his username or real name mentioned, says that while he finds muscular women in real life to be “disgusting” and considers the money-paying “schmoes” who worship real bodybuilders as nothing more than “beta weaklings,” getting off to these images photoshopped images is fun because “you turn the tables on the big women and control them. Because GUESS WHAT? You’re getting off to them whenever you want.”

Much like the voraphilia fanboys I’d interviewed for a long-dead piece about a strange YouTube video called “Jimmy the Frog,” in which a man feeds a woman to a frog, the morphers are swimming in murky and deep waters, far away from any harbor in which they might drop anchor and re-enter reality. It is, in both cases, a strangely pure internet usage, something closer to the usage patterns of 2000, when most hardcore netizens were assumed to be lonely oddballs locked away from the general population, than to 2018, when everyone is online and shouting opinions about Trump, social justice and the like.

And so, none of what I learned shed any light on what I believed to be the essential question: What does it mean to morph another person, such as an already-stigmatized female bodybuilder, without that person’s consent? Not to mention: What would it mean to such a person if they saw their own likeness morphed badly by zjefvanutsel or someone of their ilk?

Thus, I put the question to bodybuilder Vanessa Adams. “I’d laugh my ass off if that happened,” she answers. “These people aren’t controlling anything. They’re getting off to fake pictures from the comfort of their mother’s basement. There’s nothing more to it than that.”