Disclosing That You Have an STI Can Be Chill, Actually

Despite the persistence of STI stigma, positive disclosure experiences are common

When Alex, a non-binary 32-year-old from New York, was diagnosed with genital herpes about three years ago, the prospect of telling prospective partners filled them with fear. “Despite the fact that I’d long been aware that the stigma was overblown,” Alex tells me (all names have been changed for privacy), “I was extremely nervous to start having disclosure conversations because I didn’t know how they’d go or how I should initiate them.”

Googling wasn’t much help, either — internet forums “tended to be full of only the most fearful and ashamed people,” Alex says, which made the prospect of disclosure seem even more daunting.

But fast forward three years, and Alex can see that they had far less to fear from such conversations than they thought. “Nearly every conversation I’ve had has gone very well,” they continue. “In my experience, most of the people I actually want to have sex with are educated enough to know that herpes is pretty common and not a huge deal. Some people have, very politely, asked a bit more about the risks of different kinds of sex, but in my experience the most common response has been something along the lines of, ‘I don’t care at all, we can just do whatever you want.’ One person said, ‘I’ve slept with people with herpes before.’”

These days, Alex approaches new partners about the topic with little apprehension. “I felt shaky the first couple of times, but it kept going better than I expected,” they say. “Now that I’ve had practice and witnessed people reacting well so many times, I go into it without much anxiety at all.”

Alex’s story isn’t unusual, but it’s not one you hear often. So much of what’s available to read online about STI disclosure involves either dry how-tos about informing your partner; horror stories about people getting dumped or having partners react terribly when they’re told; or fearful and ashamed advice-seeking from the newly diagnosed, as Alex notes. Despite the fact that 50 percent of sexually-active people will have at least one STI by age 25, the topic remains shrouded in shame and anxiety. “The sexual revolution stopped short of liberating people from the shame and stigma of sexually transmitted infections,” Jen Gunter, an obstetrician and gynecologist practicing in California, writes in the New York Times. “Having an STI should have the same stigma as having influenza, meaning none.”

The prospect of telling a sexual partner you have an STI can be one of the most fraught aspects of diagnosis. When Rose, a 34-year-old in California, got chlamydia from her ex six years ago, she says she was “mortified” about the prospect of telling her other sexual partners. She was sleeping with two additional people and wasn’t using protection with any of them, so she was expecting to be on the receiving end of blame and judgment — except, like Alex, she wasn’t. “The two guys were super chill,” she says. “They both said, ‘Oh, alright, I’ll make a doctors’ appointment,’ and it was no big deal.”

Josh, a 27-year-old in Georgia, has a similar story. He wanted to be upfront with his then-girlfriend of six months that he likely had human papillomavirus (HPV) from a previous relationship, because he knew she had a family history of cervical cancer (long-lasting infection with certain types of HPV is the main cause of cervical cancer). Josh felt “dirty” for having an STI, and expected his girlfriend to be “revolted.” But he says, “She took it in stride, saying we would use protection and that it didn’t make her think any less of me. I remember she took my hand when I told her, and that was very reassuring — the contact confirmed I wasn’t dirty or unlovable. Obviously it worked out — we just celebrated two years of marriage.” 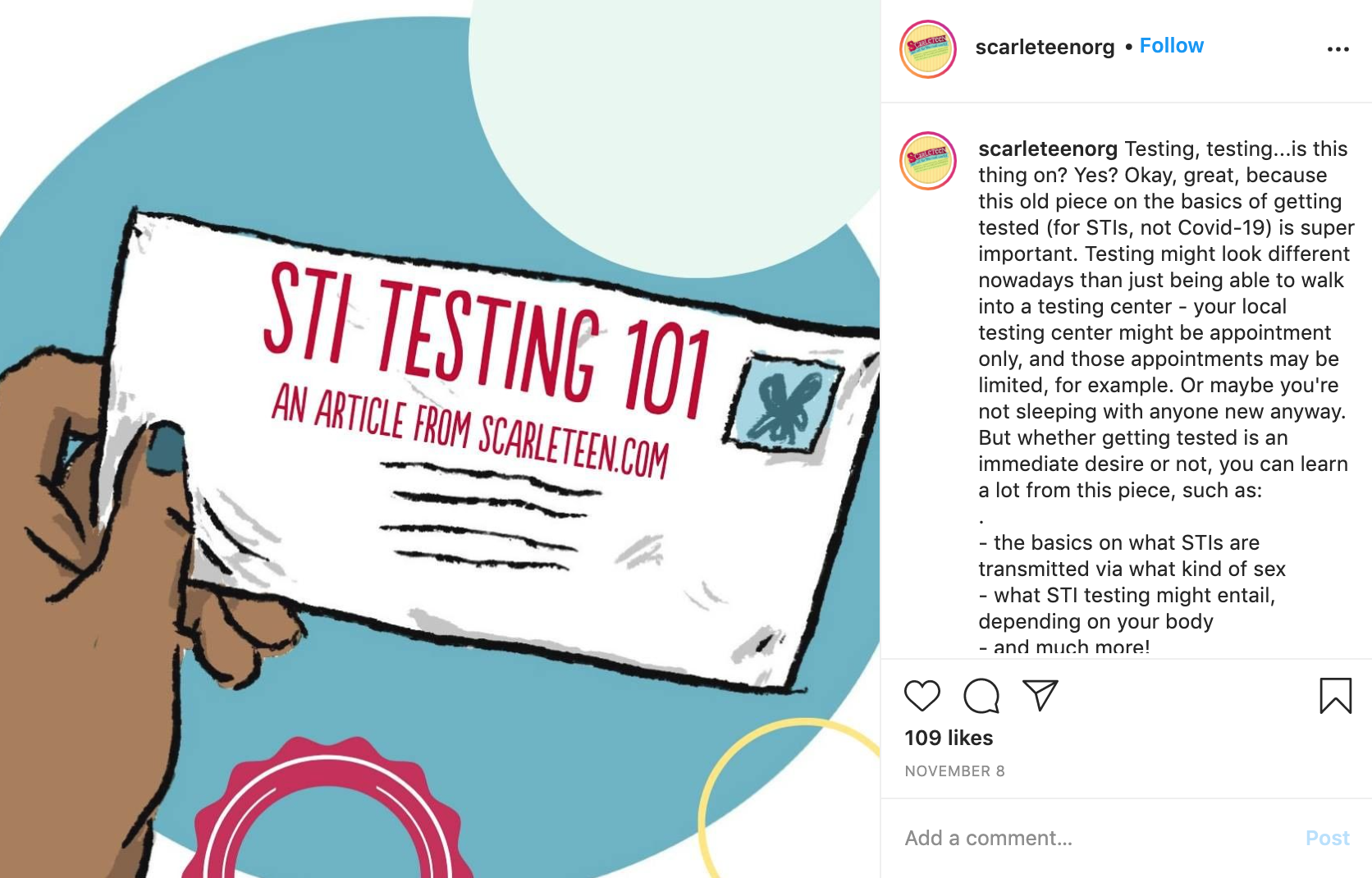 It’s easy to see how the environment we’re all raised in contributes to the fears that an STI renders a person “dirty” or “unloveable,” as Josh puts it. STI stigma is a historical constant: In ancient times, these infections were viewed as individual punishment for a blasphemic life, and by the 17th and 18th centuries, they were still being explained as the result of a patient’s moral failings. Poor women suffering from the “foul disease” called “pox” — the common term for syphilis and gonorrhea before physicians could distinguish between the two — could expect especially harsh treatment, like being thrown into a workhouse instead of receiving hospital treatment.

And while we no longer call STIs “venereal diseases” and “sailors’ diseases” or require poor people to disclose them as a condition of charitable assistance, STIs like herpes and chlamydia are still routinely used as cheap punchlines in shitty comedies, and the association with immorality persists. “I’m not sure if there was any specific, pinpointed source for my feelings [of fear] — it was more the culmination of a lifetime of stigmatization surrounding STIs in general,” Josh explains. “I think that feeling came from the stigma in movies and TV where STIs are hyperbolically characterized as gross or the result of bad personal choices, like sleeping around or doing sex work. It felt like there were implications attached to having an STI that somehow I contracted it through a fault or flaw in my character.”

Despite the persistence of STI stigma, though, positive disclosure stories are common — they’re just almost never reported on, because they lack the sensationalism and emotive charge of the horror stories. “My current boyfriend of three years didn’t bat an eye when I told him I have genital herpes,” says Caroline, a 38-year-old Canadian. “There was no haranguing or freaking out — he was just like, ‘Okay, thank you for letting me know!’” And even though Emma, a 25-year-old from Michigan, was convinced she’d “definitely never have sex again” when she too was diagnosed with herpes, she’s only had positive responses when she’s informed partners, including the following especially encouraging statements:

Of course, STIs vary in terms of their seriousness and curability, and not all STIs carry the same degree of stigma, although all carry some. Jane Bruning, the national coordinator for Positive Women, a New Zealand-based organization supporting women and their families living with HIV and AIDS, says that HIV is “definitely” surrounded by more fear and stigma than other STIs. “The problem is that people don’t know the advancements in medication,” she says. “When people think about HIV, they think about it in the 1980s, so straight away there’s a whole bunch of stigma surrounding that.”

This is consistent with the experience of Mel, 37, who is living with HIV in New Zealand. “People are still stuck on the myths and the deaths,” she says. “There’s still a lack of education around it. I’ve told people that I have children, and they assume that my kids have it — people just don’t know about it.”

Still, just like for people with less heavily stigmatized STIs, Mel has also had plenty of positive disclosure conversations that far exceeded her expectations. When she was first diagnosed in 2006, she told her partner who responded by saying, “Oh, okay, I’ll go and get a test.” “He was like, ‘Don’t worry, I’m not going anywhere,’” Mel recalls. “We got married a few years after my diagnosis, and had children a couple of years after that.”

Mel has also disclosed to people other than partners, such as new friends, and those conversations have often gone well, too. “The best ones are when the person’s like, ‘Okay, I’m listening to you and what you have to say, I’m reading these articles, I’m looking up U=U,’” Mel explains. “They’re hearing me, they’re looking into it and they’re not being an ass about it.” Like Emma, Mel can remember a person saying, “I don’t see you any differently,” and says that was one of the most affirming statements she’s heard. 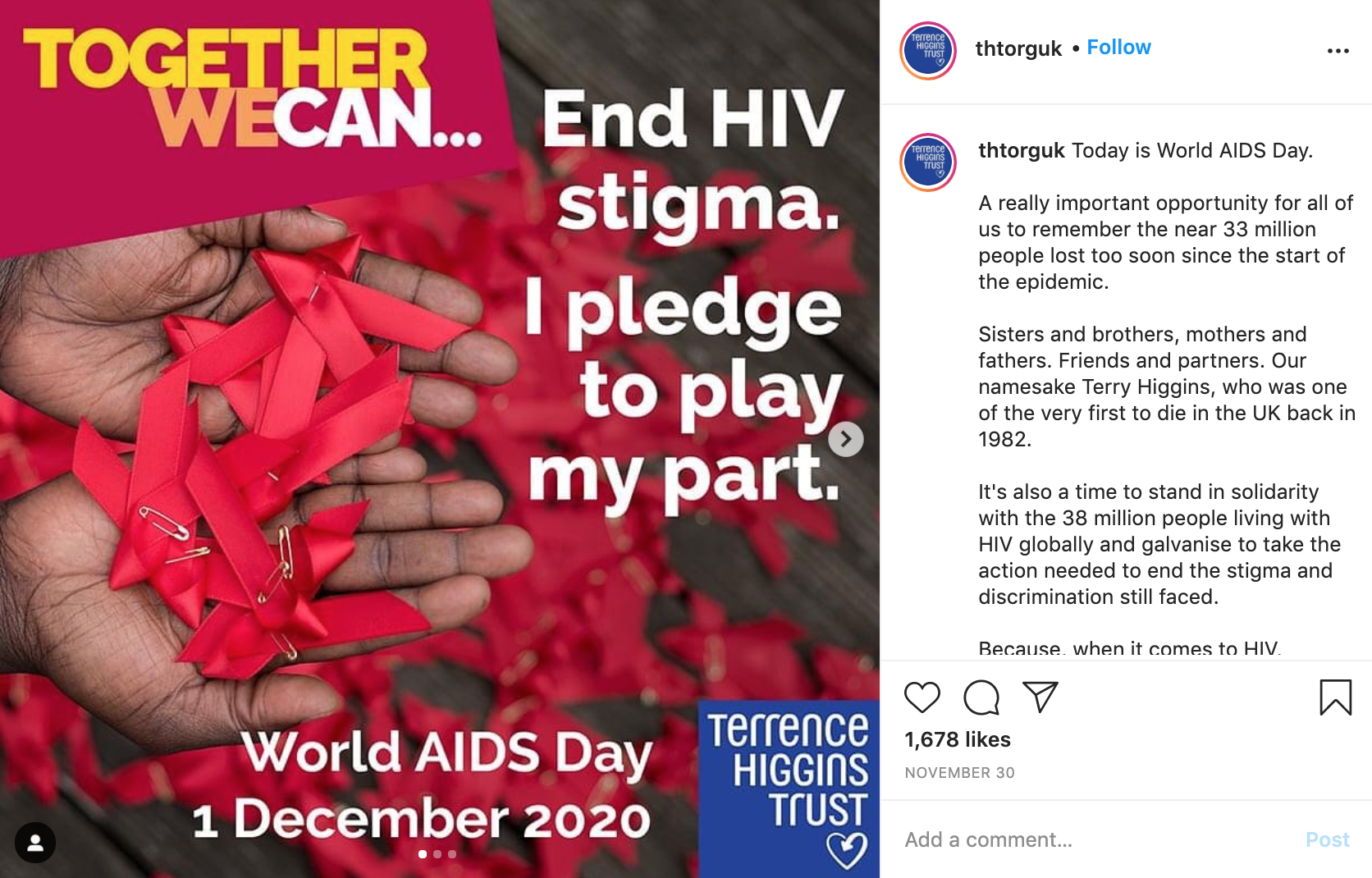 If you’re agonizing about disclosing an STI to a partner, there are ways to make the process go as smoothly as possible. The first step is to make sure you’re as comfortable and informed as possible about your diagnosis, especially if it’s new. Avoid the temptation to Google your way into the deepest recesses of the internet where fear and shame proliferate, and turn instead to your doctor and to destigmatizing individuals, organizations and social media accounts like Jenelle Marie Pierce, Ella Dawson, My Boyfriend Has Herpes, Positive Women and the Terrence Higgins Trust, to name a few. 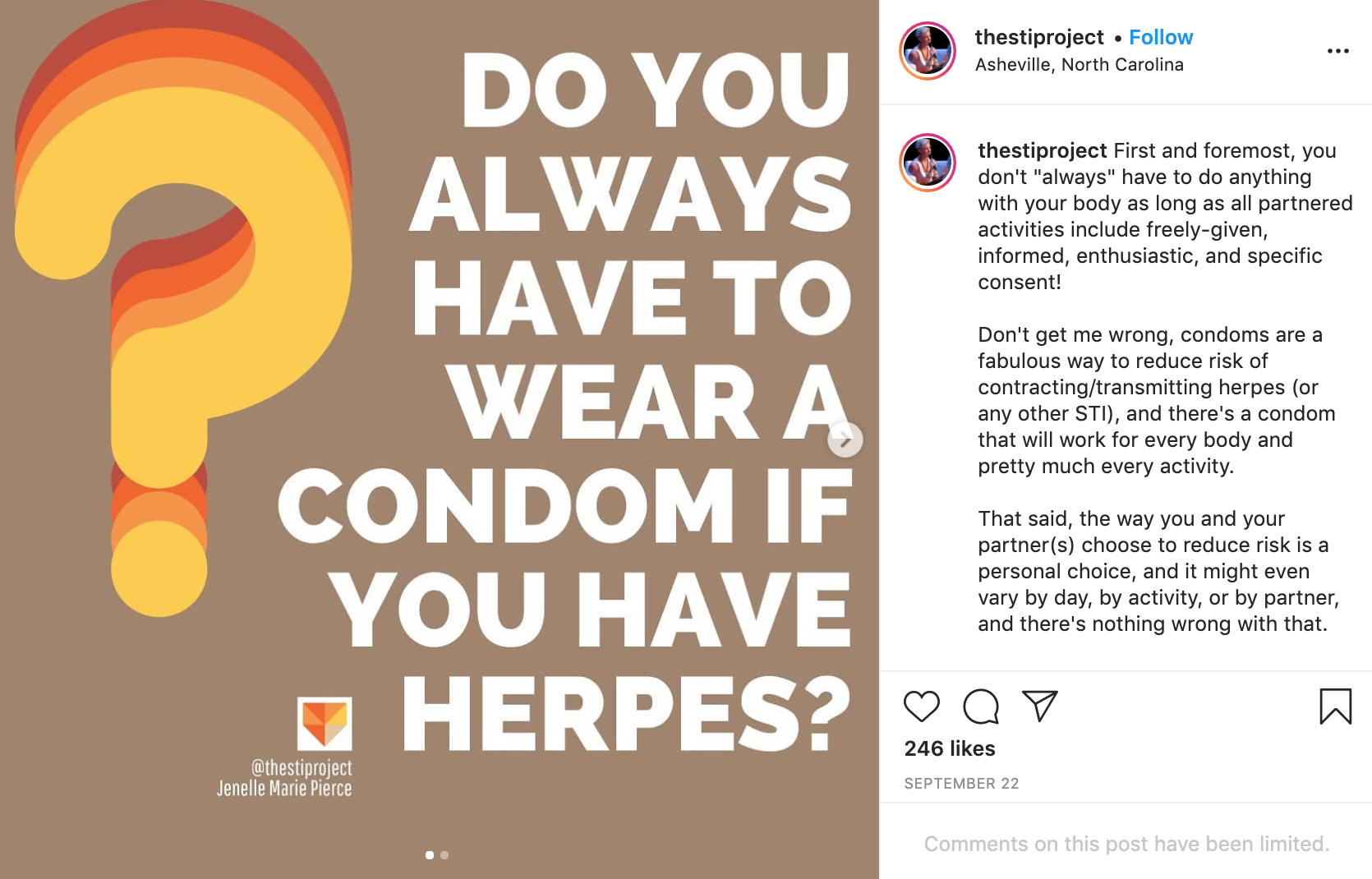 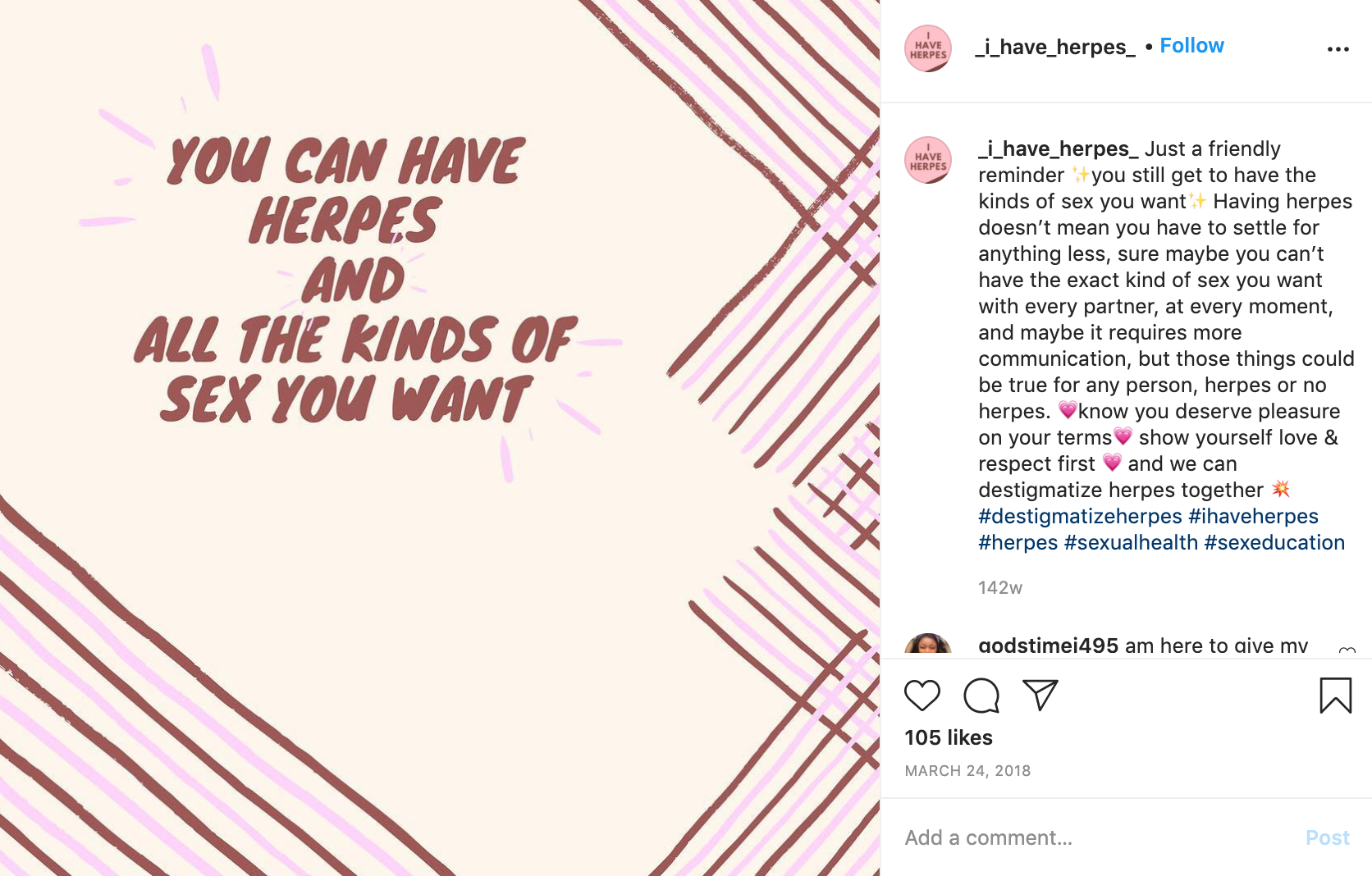 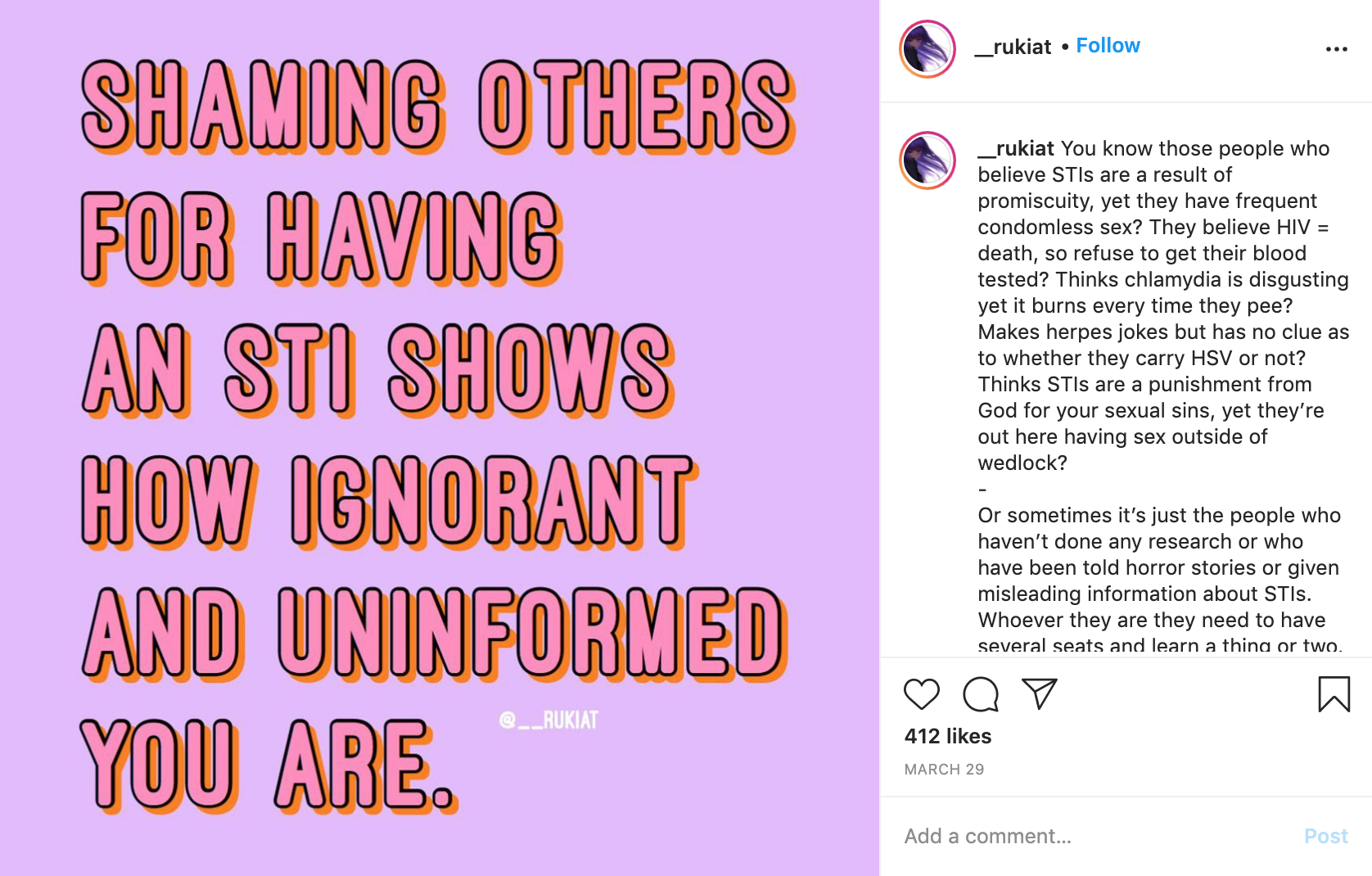 It can also help to vet the people you sleep with, steering clear of anyone expressing judgmental or puritanical attitudes about sex (see ya later, body count guys). Alex says that being queer helps put them at ease here — in their experience, queer people have more liberal attitudes about sex, are better educated about it and have “a more expansive view of what kinds of sex we might have.” But this is ultimately a question of attitude and values rather than sexual orientation, and you can sometimes glean this in advance by paying attention to how your date talks about sex and sexuality.

When you do disclose your STI, consider your demeanor. “The most useful piece of advice I encountered is that people will usually mirror your affect when you explain your status to them,” Alex explains. “If you tell them as though you’re expressing a dark, humiliating secret, implying that your life has been dramatically worsened and you’d be grateful for even a scrap of mercy, then they’re probably going to be as freaked out about it as you are. But if you explain it to them calmly, with an attitude of, ‘I don’t think this is a big deal,’ they’re more likely to stay calm as well.” 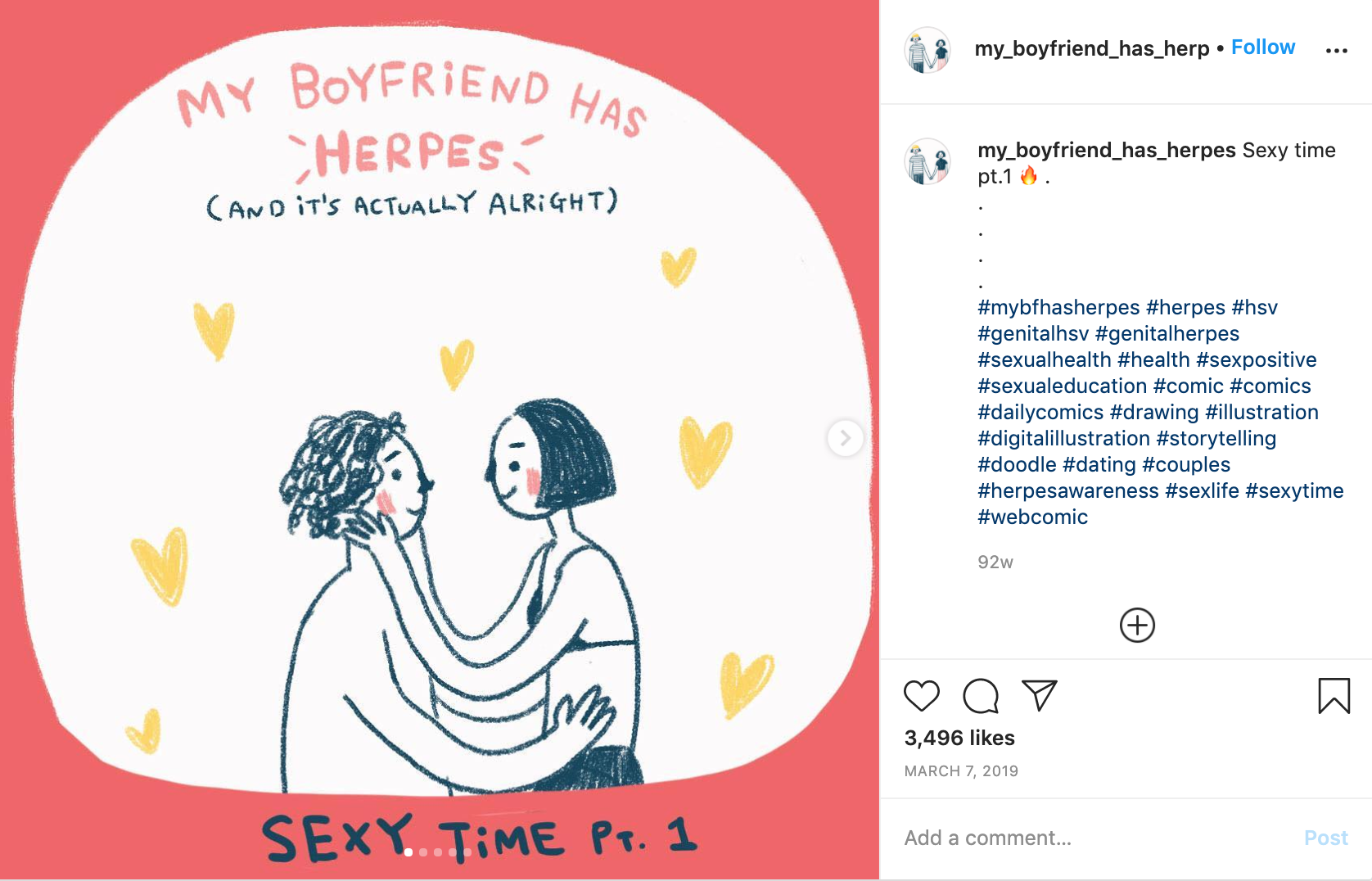 It’s worth remembering that there are potential positives to an STI disclosure conversation, including that they can forge immediate intimacy. “I find that telling people has enabled them to open up and tell me something about themselves that they felt discriminated about or found it hard to face,” Mel says, “whether it be mental health or that they’ve had an STI or whatever.” Alex agrees, adding, “When the discussion goes well, it quickly opens a line of communication and establishes a sense of mutual trust.”

Obviously, no one can guarantee that every disclosure conversation will go swimmingly, and there’s always a chance that you’ll encounter someone who will respond like a dick. (Everyone I speak to clarifies that a partner simply opting out of sex post-disclosure doesn’t qualify as “dickishness”; there needs to be some additional element of shaming, disgust or judgement.) But even worst-case-scenario reactions — which, again, are far rarer than the newly-diagnosed often imagine — are withstandable, especially if you’ve quelled the STI stigma within. If you can see a negative response as indicating ignorance, fear, immaturity and unkindness on the part of the person responding — rather than as a reflection of your worth and lovability — it’s likely to sting less.

Finally, as several people point out, STI disclosure can be a useful filtering mechanism. If a prospective partner responds to your disclosure by being an asshole, you’ve ultimately dodged a bullet and saved yourself time and future headaches. But if they’re kind and open-minded, you’ve probably got a great lover on your hands. “The disclosure conversation actually feels like a pretty good test to me of whether someone is the kind of person I might enjoy having sex with,” Alex explains. “If someone were ever so disgusted about it that they didn’t want to have sex with me, I wouldn’t consider it much of a loss, because it would mean that we probably have really different ideas about sex.”

Mel feels exactly the same, stating plainly, “It tells me who’s a good person in my life and who isn’t.”