How Long Do You Wait to Say ‘I Love You’?

We were on a street in the middle of Manhattan, a little drunk from a party and highly emotional. After about six months of dating, she was moving back to the West Coast (and, most likely, her ex); now she wasn’t sure about that choice. Neither of us had any idea what promises the future held.

So, I figured, better come clean. I hadn’t planned it; the words just tumbled out. To be honest, it was a whole lot more grandiose than “I love you”: What I said was “I’ll always love you.”

She took it in — but didn’t say it back.

In hindsight, I think I made the right call. Maddie and I have been living together for two years now, and we both say “I love you” often. But at the time, I endured the panic that whoever first broaches the L Zone suffers when the other person has to take a moment, or days, or months to echo the sentiment. It’s terrifying, the possibility that you’ve been operating on different emotional wavelengths. Still, there comes a time to put up or shut up.

Most people appear to agree, however, that one can pull the love ripcord too soon. Such was the case when Luke, a contestant on romance reality show The Bachelorette, told Hannah, this season’s star, that he was “starting to fall in love” with her on the second week of the show — that is, about 48 hours after they’d met.

Fans ridiculed this premature declaration (made all the more ridiculous because he used it to avoid performing in a talent showcase) as a stunt designed to ensure temporary survival in the competition. Indeed, this may have been the only context where the red flag that is a preemptive L-bomb may be overlooked. In the actual dating world, it’s gonna sound even more desperate, emotionally unserious, or like an obvious bid for immediate sex.

Generally speaking, it sounds like you want to build up a few months of solid, healthy dating history — and ideally some naked time! — before you go all in. Leading with love upfront, per one dating coach, “shows an astounding lack of (1) social awareness, (2) patience, and (3) impulse control.” None of that is likely to be a turn-on. “If my man said [it on] the first date,” a Yahoo! Answers user claimed, “it’d freak me out and it’d be less likely I’d continue dating him. I don’t believe in love at first sight, and I’d think he was just saying that to get me in bed.” Another commenter agreed: “And you cannot know you are in love with someone after meeting them once. I don’t care what you feel — it’s just not possible. You know nothing about them. If you’re feeling that strongly, that’s called infatuation, not love.” That phenomenon helps to explain why a guy on The Bachelorette may jump the gun — not just to stay in the game, but as part of the exhilaration of being on TV and seeing beautiful woman whose approval is all-important.

But no matter how long you wait, “I love you” is going to be a hell of a gamble, unless, as in several of these Reddit stories, you and your partner have an almost telepathic sense of when you’re both ready to blurt it out. Best not to hope for this Hollywood version of events and try to understand your own romantic pace, especially as it lines up with your beloved’s. If it seems “too early,” it may well be!

Gauging the right moment isn’t just a matter of knowing you’re comfortable voicing a deep and layered intuition — it’s knowing they are ready to hear it. Otherwise you can get the dreaded pause, the “Uh, thanks,” the “Let’s cool off for a little while,” or the plain old “Sorry, what?” It’s not that any of these reactions are guaranteed relationship-killers, but they’re guaranteed to up the stakes and add to your anxiety as things move forward (or start to fall apart). 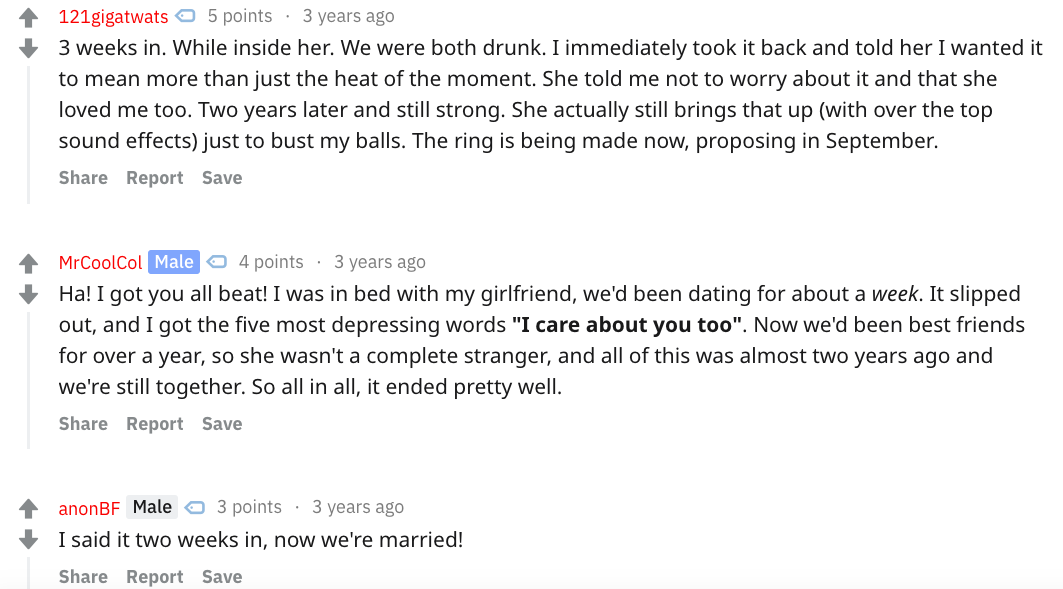 Really, when you put all the caveats aside and try to rein in all those contradictory desires — to be direct but not intense, close but not clingy — you remember that when the first “I love you” happens does not set the entire course of that love.

Maybe it’s mutual, and grows, then fades. Maybe, if the overture goes badly, this was never that serious in the first place, and you’re better off moving on, looking for someone to match your passion. The question of timing, and calculating, and waiting can soon obscure the fact that life is short and precious. Meaning, you don’t need to waste another day wondering if it’s a mistake to speak from the heart. The important thing is to mean it.