The Problem With Memeing Republican Women

It’s always been a little too easy to make fun of the gaffes of politicians. Then there’s someone like Marjorie Taylor Greene, who invites parody almost every time she opens her mouth. The far-right Georgia congresswoman has made lots of news recently for everything from challenging the results of the 2020 election to saying that California wildfires are the result of secret Jewish space lasers.

Because these claims are patently absurd, they’ve invited lots of comedy. “Jewish space lasers” became a Twitter meme that eventually made its way to the New Yorker, where Andy Borowitz satirized them with an article saying Greene blamed Jewish snow machines for the recent Northeast blizzard. Greene was also parodied on SNL, where Cecily Strong (as Greene) offered Kate McKinnon’s character a gun out of her purse and then proceeded to make light of a Facebook post calling for Nancy Pelosi to be shot in the head.

What’s wrong exactly with making fun of Greene like this? After all, SNL has always parodied politicians, especially Republicans — from Chevy Chase as Gerald Ford and Dana Carvey as George H.W. Bush to Will Ferrell as George W. Bush and Tina Fey as Sarah Palin.

For starters, the stakes seem higher now. It was only a month ago that Trump supporters stormed the U.S. Capitol, threatening the lives of several congressional members and looking to hang Vice President Mike Pence for not overturning the results of the election (no matter that he was blindly loyal to Trump throughout Trump’s presidency). But also, we got here in part because there’s existed for several years now a cycle of ridiculing obscure Republican women until they’ve become household names. Tomi Lahren and Kaitlin Bennett immediately come to mind as perfect examples, both of whom have gained a national platform due solely to being memed on social media.

In the humorous reproduction of what they say and do, these women have been made to seem quaint or docile rather than dangerous. Lahren, in particular, became a meme of white female anger. The image — which Know Your Meme describes as “spooky Tomi Lahren” — shows her with a comically enlarged mouth to convey how loud she shouts her backwards opinions. Yet, despite her racist rantings, the New York Times called her a “rising media star,” she made it to the Daily Show and she got a job at Fox News, where she still hosts a show on its streaming spin-off Fox Nation. 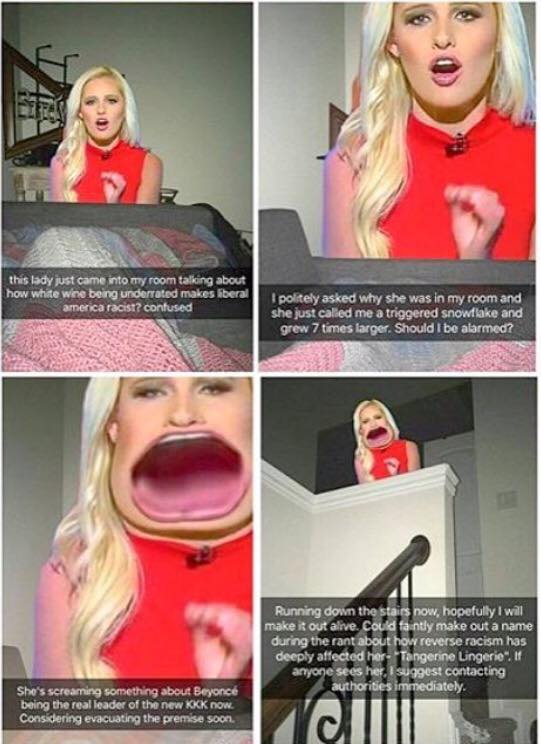 The same is true for Bennett (aka the “Kent State gun girl”), who first gained recognition online as an ardent gun-rights activist. Aside from fighting for the ability to open-carry on her college campus, she also gained popularity (and became a meme) by posting thirst traps featuring AR-15s. Her antics — and again, the satirization of them online — garnered her a gig at InfoWars, the Alex Jones-led media outlet that regularly espouses conspiracy theories, including that Sandy Hook was a hoax. Just two years ago, Bennett had 92,000 followers; today, she commands an audience of more than 350,000 people.

It doesn’t stop there either. A few weeks ago, Trump’s personal evangelical advisor, Paula White, who has called the Black Lives Matter movement an “anti-Christ,” “terrorist organization,” went viral for an address she delivered calling on angels to help Trump get a second term. But rather than focusing on the content of her bat-shit speech, it was remixed into oblivion, providing just another humorous distraction while we doomscroll.

As lighthearted and dismissive as these memes may seem, they’ve created a model for many Republican women to follow. Moreover, their meme-fueled prominence will no doubt help the Republican Party rebrand itself, as many pundits have already pointed out, as decidedly more female, headed up by women like Greene, Lauren Boebert and Kristi Noem. To that end, plenty of female Republicans are already looking to run for the party’s presidential nomination in 2024, with former South Carolina governor and Ambassador to the United Nations Nikki Haley holding maybe the highest current odds.

In other words, as opposed to Trump’s clumsy coup attempt, all signs point to a much subtler power grab, one that cloaks “white power” in “girl power.”

Let’s not be too busy retweeting to notice.

Mathew Rodriguez is an editor at the Body. He is a former staff writer at Out, INTO and Mic. His writing has been featured in Slate, Complex and POZ. He loves Flannery O'Connor and 'Buffy the Vampire Slayer.'