In the Hockey Documentary ‘Red Penguins,’ American Exceptionalism Gets Put on Ice

This breezy, ‘30 for 30’-like film recounts how U.S. investors tried to profit off a rebrand of the former Soviet Union’s championship team. But the movie mostly just demonstrates the limits of capitalism and arrogance.

One version of American history over the last 50 years is the story of a mighty country so assured of its own greatness that it barrels headlong into one disaster after another, convinced it can do anything and then discovering that it most certainly cannot. From Vietnam to Iraq, American intervention has often gone hand-in-hand with American arrogance — a misplaced belief that our mission is always righteous and our methods always impeccable. What the past half-century has repeatedly demonstrated is that there’s a limit to just how magnificent we are.

Unfortunately, that swaggering stupidity doesn’t exist in a vacuum — millions of lives are imperiled because of our unearned confidence — so it’s ghoulish to take delight in our humiliation. This might explain why I found a certain amount of pleasure in Red Penguins, the new documentary that recounts a few Americans’ foolhardy belief that they could rescue the Russian national hockey team and, in the process, enrich themselves. Unlike our frequent military invasions of other countries, this business venture was relatively nonlethal and blessedly free of major stakes. But it ended just as spectacularly badly, which means watching Red Penguins will fill you with guilt-free schadenfreude. The Americans thought they’d be celebrated as liberators. Instead, they whimpered home with their hockey stick between their legs.

The film is directed by Gabe Polsky, who a few years ago made Red Army, a documentary about the Soviets’ formidable hockey team that ruled the sport in the 1970s and 1980s. (The whole reason the 1980 Winter Olympics “Miracle on Ice” is such a hallowed sports moment in this country is that our underdog team beat them.) That film had a 30 for 30 feel — it was breezy and informative, full of colorful characters — and Red Penguins could almost be considered a follow-up. But although his new documentary boasts a similarly slick style, it chronicles a piece of sports arcanum that’s probably less-well-known, which allows Polsky a chance to surprise us with his tale’s weird twists and eccentric protagonists. If this were a fiction film, it might be hard to buy. But all this really happened.

After the Berlin Wall came down and the Soviet Union imploded, the country’s Red Army hockey team found itself in an unusual position: destitute. Always supported by the government, the national squad was, suddenly, being picked clean, the best Soviet players abandoning their homeland to chase big dollars in the NHL. So a group of American investors — as well as a prominent Canadian-American — decided to invest in the Russian squad, seeing it as a way to bring some good ‘ol capitalism to the former U.S.S.R. (As Red Penguins demonstrates, these investors, which included Pittsburgh Penguins owner Howard Baldwin and movie star Michael J. Fox, weren’t alone in seeing Russia as a lucrative new financial opportunity. Companies like McDonald’s were flooding the failed communist country, excited about exploiting this untapped market.) 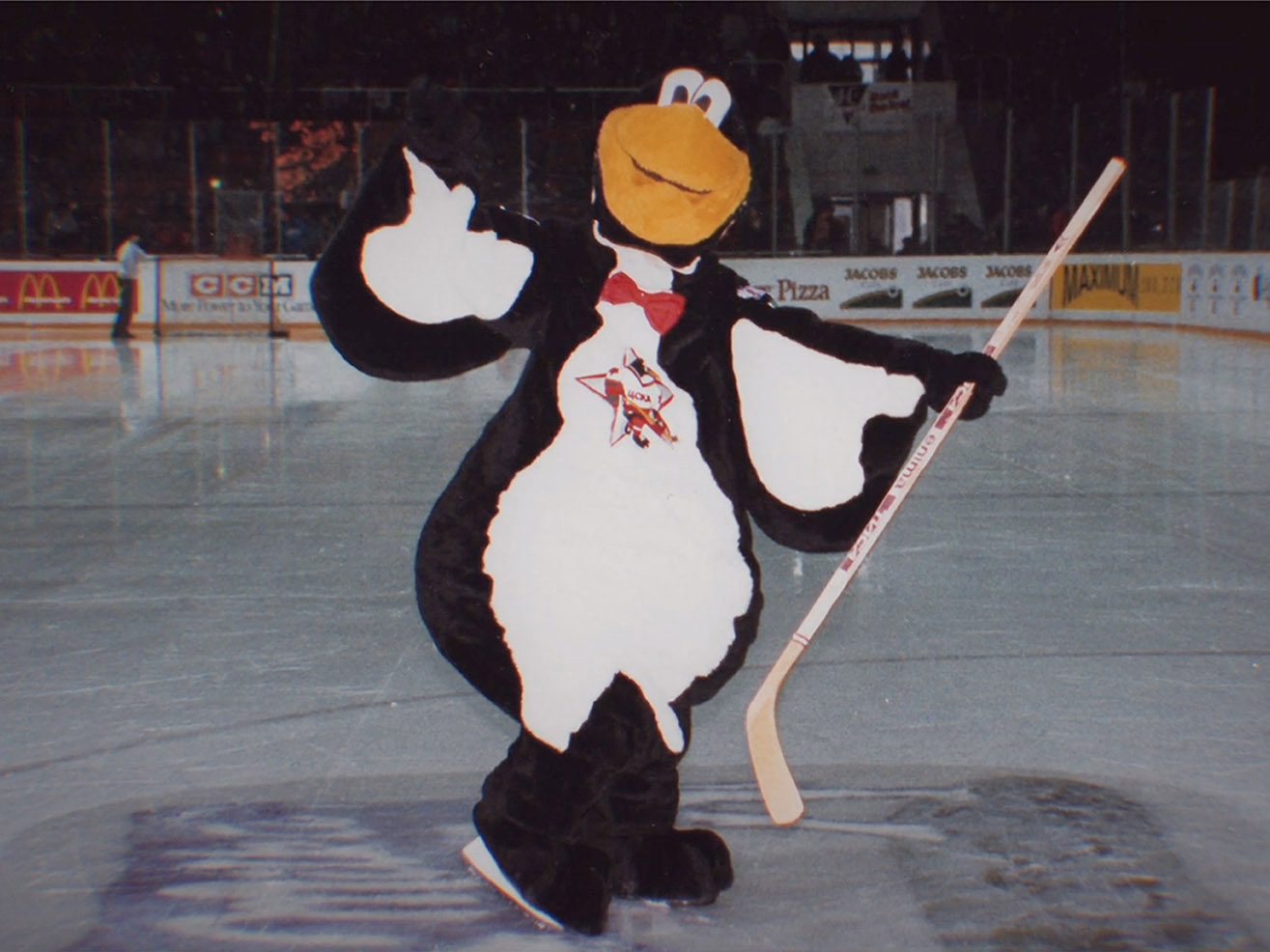 Polsky puts Baldwin on camera, and within a few minutes, it’s clear he’s the sort of big-dreaming American entrepreneur who’s all about wheeling and dealing. (He’s also a film producer, Oscar-nominated for Ray but responsible for Sudden Death as well, the really stupid Die Hard ripoff starring Jean-Claude Van Damme trapped in a hockey rink.) Quickly, though, Baldwin is overshadowed by an even more outrageous figure, Steven Warshaw, a marketing executive who’s sent over to Moscow to oversee the reboot of the Red Army team, now called the Russian Penguins. Forced to contend with crumbling infrastructure, a devastated economy, sagging national morale and a deeply mediocre talent pool, Warshaw had to resort to tawdry tactics to get locals to see this woeful team, including doing wet T-shirt contests and stripteases during intermission. Utterly shameless, Warshaw savors telling each of his ridiculous stories during Red Penguins — he’s a huckster, a relentless self-promoter and endlessly entertaining because of his cringe-y lack of self-awareness.

Red Penguins has all the trappings of a David-versus-Goliath inspirational sports comedy, like if The Bad News Bears relocated to the Kremlin. But there’s no happy ending to be found here, and Polsky does a solid job laying out all the ways this business venture went down the tubes. What Baldwin and his cohorts will rapidly learn is that, just because the former Soviet Union is reeling from losing the Cold War, its citizens won’t simply roll over for the newly arrived Americans. Like our invading military, the U.S. businessmen arrive in Russia to find a culture they don’t understand and have badly underestimated. Funds go missing. The mob starts causing trouble. And, in general, the Americans’ Russian partners are untrusting and potentially untrustworthy. (Warshaw talks about how much the team’s general manager, Valery Gushin, made him nervous. When Gushin speaks to Polsky, we understand why Warshaw was alarmed: He’s got that aloof, menacing quality that’s been fashionable for Soviet movie bad guys for decades.)

But if the growing pains and cultural divides are expected, Red Penguins also details just how gross American enterprise was during this period, viewing this Russian team as both a branding opportunity and a piggy bank. Baldwin hoped the investment would funnel Russia’s remaining good players to his NHL team. Michael Eisner, then head of Disney, eventually gets involved as well, wanting to position the Red Penguins as a lucrative possible tie-in to the Mighty Ducks. (If you think Russian mobsters are ruthless, you haven’t met the Walt Disney Company.) From Warshaw’s brash marketing tactics to his partners’ predatory self-interests, this once-dominant hockey team was assaulted on all sides, a living embodiment of what happens when capitalism gets its hands on a promising commercial entity. You almost feel bad for the Russians — until you hear from them and realize they were well-equipped to deal with these meddling outsiders. If anything, you might end up sympathizing with the greedy capitalists, who were in many ways the naive side of this partnership.

As slick and engaging as Red Penguins can be, this story does take a dark turn. (It’s one of the rare sports documentaries with a body count, a grim reminder of the harsh realities of post-Cold War Russia.) Polsky connects the dots between the early 1990s and now, showing how America’s longstanding friction with our communist foes has merely entered a strange new realm in modern times. When Putin finally shows up in Red Penguins’ archival footage, it’s not as some cheap gotcha but, rather, as a wry denouement to this bizarre, short-lived hockey venture.

Like Baldwin and his cronies, we still think we’ve got Russia all figured out. Turns out, that’s a losing proposition.