Ranking the Most Popular Soups by How Healthy They Are

Chicken Noodle? Ramen? Pozole? Which is most likely to cure this Goddamn cold?

Over the last Super Bowl weekend, I declared that soup (and an omelette) is the best hangover cure. “The soup provides fluids and sodium that help combat the hangover-inducing dehydration often caused by drinking 20 grief beers after your team loses the Super Bowl,” I argued.

But much like everything else we put in our mouths, some soups are significantly healthier than others, so I asked Dana Hunnes, senior dietitian at the Ronald Reagan UCLA Medical Center, to help me rank popular soups — from soup-er healthy to “may as well be a bowl of watery crap.”

Hunnes also mentions that canned soups and those served at restaurants usually contain a shitload of salt, and that too much sodium is linked to high blood pressure, as well as increased risk for heart disease and kidney disease. “Homemade soups tend to be healthier, since they usually contain less salt, although this [obviously] depends on the taste of the person making it.” All of which means, if you absolutely must have Campbell’s, consider opting for their low sodium soups. 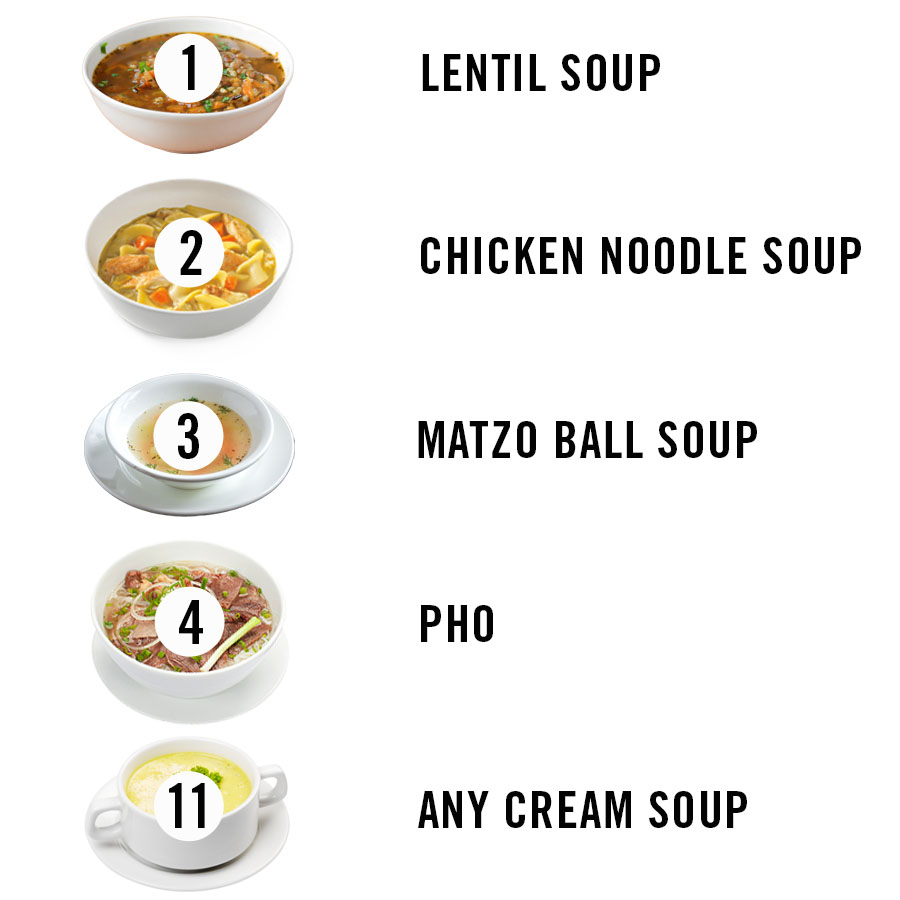 With that out of the way, let’s rank some soups…

1) Lentil Soup: Hunnes previously told me that lentils are the backbone of any cheap-and-healthy diet, so I can’t say I’m surprised that she crowned lentil soup as the healthiest soup on this list. “It’s low in calories, high in fiber and a good source of plant-based protein,” she says. “Lentils also cook fairly quickly,” which is always a plus.

2) Chicken Noodle Soup: “This soup is also known as ‘Jewish Penicillin,’ because it really helps thin mucus, which can make you feel better when you’re sick,” Hunnes explains. “I personally prefer vegetable noodle soup, but for people who like their chicken, this is pretty healthy too. Usually made from a base of chicken broth (boiled chicken and bones), celery, onion, garlic, carrots and noodles, it’s a fairly simple soup to make. It’s also low in calories and good for your health. Plus, this soup becomes even healthier when made with whole-grain noodles.”

3) Matzo Ball Soup: “This is usually a variation of chicken noodle soup, but instead of noodles, there are matzo balls,” Hunnes says. “Since the matzo balls are typically made with white flour [which is terrible for you, since the bleaching process that it undergoes strips away all of the nutrients], I rank this just below chicken noodle soup. However, if you use whole-wheat matzo, I would tie this with chicken noodle soup, since it’s the same basic base.”

4) Pho: “I rank pho as low as I do primarily because there’s not much in the way of fiber in this soup — it’s just broth, noodles and meat,” Hunnes explains. “The lack of fiber is really unfortunate, unless the noodles eaten with the soup are whole grain. Pho also tends to be quite salty.”

5) Ramen: “Ramen is a lot like pho in that it’s a broth with noodles and small pieces of meat,” Hunnes says. “It tends to be very salty because of soy sauce and the other highly-salted sauces added to the base. And if we’re talking about ramen in the package, that’s the least healthy soup on this list, since it’s nothing but glorified white-flour noodles in a salt ‘broth.’” This is sadly very true, as we’ve already established.

6) Tom Kha Gai: “This is basically a chicken coconut soup, and coconut is better than dairy-based creams, since it doesn’t have the casein in it and it has medium chain triglycerides [which are linked to increased endurance, weight loss and lowered cholesterol],” Hunnes says. “All in all, this soup has a reasonable amount of fiber from the vegetables and some healthier-than-red-meat chicken.”

7) Wedding Soup: “This is a broth-based soup, but it’s somewhat heavy, and the emphasis on meat and eggs puts it lower on the list due to the high content of saturated fat [which has traditionally been linked to heart disease] in the meat,” Hunnes says. “It can also be on the saltier side.”

8) Tomato Soup: “This one really depends on how the soup is made: If it’s cream-less and/or butterless, I would put it up near lentil soup, because of the healthy lycopene [which has been linked to many health benefits, including reduced risk of heart disease and cancer] provided by tomatoes,” Hunnes says. “However, if it’s creamy and/or buttery, I would rank this soup toward the bottom, since those saturated fats make it less healthy.”

9) French Onion Soup: “If it weren’t for the heavily-cheesed crouton, I would rank this soup near the very top, because it’s basically bone broth, onions, and herbs, all of which can be very low in calories,” Hunnes says. “It’s truly the croutons and cheese that make it end up near the bottom. Plus, it can be on the salty side.”

10) Pozole: “This is a pork and corn (or hominy) soup,” Hunnes explains. “The corn (which provides fiber) tends to make this soup healthier; however, pork is technically a red meat [and one of the least healthy, at that], and depending on how much is used, it may contribute a lot of saturated fat. Also, this soup is likely to be saltier and higher in calories than many of the others on the list.”

11) Every “Cream of” Soup: “Overall, all of the soups I was asked to rank here are far healthier than, for example, cream of broccoli or cream of mushroom soup, which are extremely high in fat and calories,” Hunnes says. And yes, as mentioned earlier, that includes chowder of all kinds.