Ranking Caffeinated Beverages by How Effective They Are

Coffee? Tea? Energy drinks? Which is most likely to keep me awake until the sun inevitably explodes?

Legend holds that caffeine was discovered at least 5,000 years ago, when a Chinese emperor named Shennong figured out that placing certain leaves in boiling water results in an aromatic and exhilarating beverage now known as tea. Nowadays, caffeinated drinks come in many flavors and provide various degrees of energy, which can make choosing one over another tricky.

To figure out which caffeinated beverages are best at providing sustained energy, I asked Dana Hunnes, senior dietitian at the Ronald Reagan UCLA Medical Center, to help me rank them by how effective they are — from kinda energizing to “might-as-well-be-cocaine.”

Sadly, though, caffeine and its effects are too complicated to conclusively say that one energizing beverage is straight-up more effective than another. “There isn’t one clear-cut answer,” Hunnes confirms. “How well these beverages energize someone might depend on a few things, including a person’s metabolism, how quickly they utilize the caffeine, and of course, the sugar content in the product.” 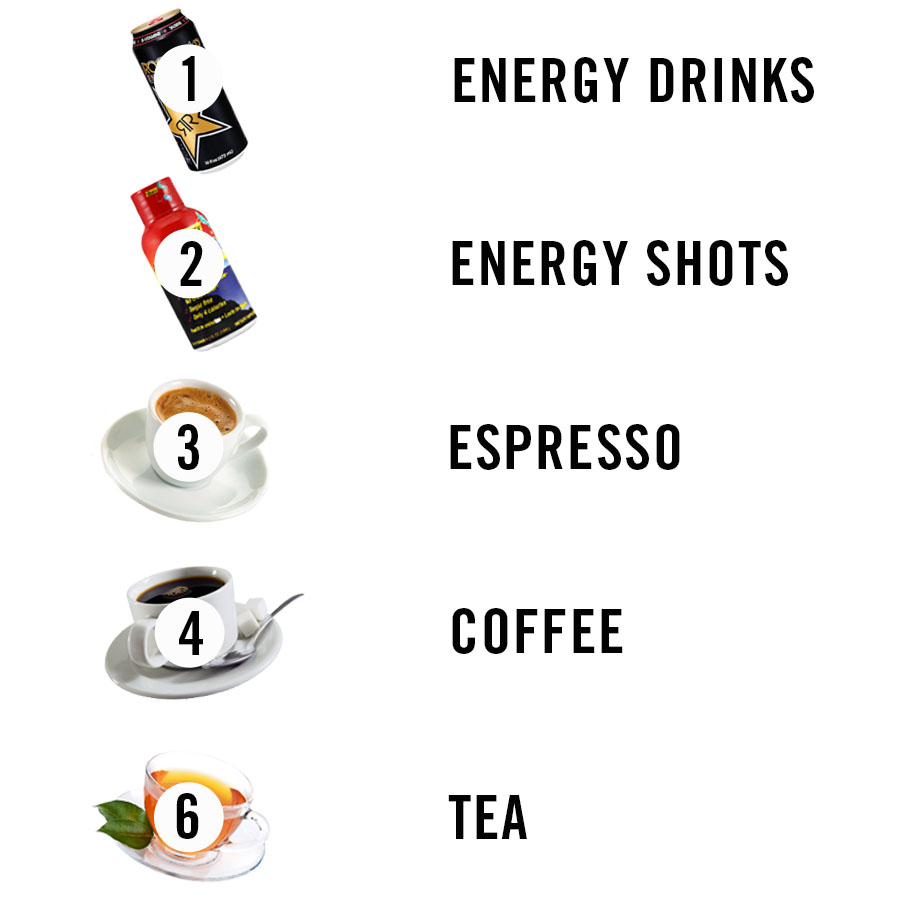 That said, I can easily rank caffeinated beverages by their caffeine content:

1) Energy Drinks: Overall, energy drinks have incredibly high amounts of caffeine. For example, one 24-ounce can of Rockstar Energy Drink contains 240 milligrams of caffeine, which amounts to about two and a half cups of coffee.

2) Energy Shots: Energy shots, like 5-Hour Energy, which contains 215 milligrams of caffeine, are right up there with energy drinks.

4) Coffee: An ounce of coffee contains about 15 milligrams of caffeine, and while that might seem like significantly less than espresso, keep in mind that nobody drinks just one ounce of coffee, but many people drink just one ounce of espresso. For example, an 8-ounce cup of Starbucks Blonde Roast contains 180 milligrams, which means, while espresso contains more caffeine per ounce, you’re probably more likely to consume higher amounts of caffeine while drinking plain old coffee than while sipping on a latte.

5) Soda: Soda is relatively low in caffeine. One Diet Coke, for instance, contains only 46 milligrams.

So energy drinks and shots win when it comes to caffeine content. However, that doesn’t necessarily mean they provide the best form of sustained energy. While all that caffeine might give you a quick boost, the massive amounts of sugar in these drinks (one 12-ounce Red Bull contains 37 grams, or the equivalent of about 35 gummy bears) can contribute to a prompt crash following that energy spike. The same could be said about sodas, and while diet versions don’t contain sugar, they do contain super unhealthy artificial sweeteners that can mess with our bodies in all sorts of ways.

Not to mention, the high amounts of caffeine in energy drinks can often cause negative effects, including addiction, insomnia and irritability — none of which contribute to a beneficial energy boost.

So energy drinks and sodas aren’t the best drinks when it comes to caffeinating. Coffee and tea, however, are pretty effective. (In terms of volume, experts say that healthy adults can safely consume about 400 milligrams of caffeine per day, or roughly four cups of coffee.) In fact, plain coffee can help prevent diabetes, while tea, particularly green tea, contains an amino acid called L-theanine that slows how quickly the body absorbs caffeine — the average effects of caffeine last between four and six hours — resulting in a longer-lasting, more stable energy boost. Which brings me to my next point…

People metabolize caffeine in different ways. “For someone like me, who sometimes drinks three cups of coffee first thing in the morning, I’ve become relatively ‘immune’ to the caffeine,” Hunnes says. More specifically, studies show that some people have genes that make them either fast or slow caffeine metabolizers — and those with the slow gene generally react to caffeine much worse, experiencing less of the energizing effects and more of the heart-hurting effects. So if you find that caffeine generally makes you feel worse than it does better, you’re probably better off drinking smaller amounts or completely staying away from it.

When you drink your caffeine also makes a difference, as I reported previously:

“The best times to caffeinate for the average person aren’t first thing in the morning, but during the breaks between 9:30 a.m. to 11:30 a.m. and 1:30 p.m. to 5 p.m. That way, you take advantage of those cortisol level dips that would otherwise leave you feeling lethargic. Early birds (who wake up around 4 a.m.) can shift that schedule to caffeinate three hours earlier, and night owls (who wake up around 10 a.m.) can benefit from caffeinating three hours later.”

Basically, figuring out which caffeinated drinks provide the perfect amount of energy really boils down to a combination of how your body reacts to caffeine and consuming that caffeine at the appropriate times. Still, it seems fair to say that energy drinks and sodas are more likely to provide heavy-hitting, if brief, stints of energy. Coffee and espresso, meanwhile, should give you a nice buzz for a few hours, so long as you don’t overdo it. And finally, while tea might not provide a massive caffeine-induced rush, it should do the best job at giving you sustained energy.

Now if you’ll excuse me, I’m a little jittery from all this caffeine. * runs through wall accidentally *