Uncovering the Secrets of the 2017 Vegas Massacre

With his new film ‘Money Machine,’ documentarian Ramsey Denison is risking it all to expose corruption in Sin City

If an instance of police brutality against Ramsey Denison didn’t save his life exactly, the documentary director says it at least helped him live a more productive one. “Before that happened, I was kind of on this downward spiral,” says the 41-year-old Angeleno, who just released his second film, Money Machine, about corruption in the Las Vegas Metropolitan Police Department. “My ex-girlfriend had broken up with me in 2012 because I was basically just doing a lot of gambling and going to Vegas.”

Working full-time as a TV editor, Denison says he made the kind of Hollywood living that afforded him the ability to be an “indulgent fuck-off” on weekends, “drinking beer and fucking around.” But his wake-up call actually came a year after his girlfriend walked out on him, at the end of another wild night in Sin City.

While decompressing there after a labor-intensive project had wrapped, a local friend of Denison’s, Rhett Nielson, reached out to him and said he and his girlfriend had just called it quits. Drinks were in order, and the evening brought the pair to a gentlemen’s club called Treasures. Upon leaving the venue around 4 a.m., strolling into the parking lot, Denison and Nielson say they witnessed four LVMPD officers verbally abusing a male suspect in custody. The cops also twisted his handcuffs, causing him to scream out in pain. Nielson, who for a time had been an LVMPD SWAT team videographer, widened his eyes and told Denison that the officers’ behavior was, to put it mildly, atypical.

For all Denison knew, the suspect was very much guilty of a crime, but he didn’t think the cops should “delight in torture” as they seemed to be. “Not only is it cruel, but it’s also a waste of resources,” Denison says. “You’ve got four shitbag cops getting paid by the government to sit around and torture somebody. Fuck that.”

Denison called 911 to report the conduct and the operator told him that she’d alert the sergeant on duty. A moment later, Denison says two of the officers approached him. One of them asked Denison what he was doing, to which Denison says he replied, “Well, I’ve been watching what you’re doing; there’s nothing right about it, so I called 911.”

Anger seared its way into the officer’s face, Denison says, and he ordered Denison and Nielson to leave or else they’d be arrested. As Denison walked away, he asked, “Arrested for what?” He alleges the two officers then threw him to the concrete. One stomped his head with a boot, leaving a scrape and some bruising that’s visible in Denison’s mugshot, while the other mounted his back and screamed at him. “It was probably the worst two minutes of my life,” Denison says. “It was just awful; I could barely breathe.” 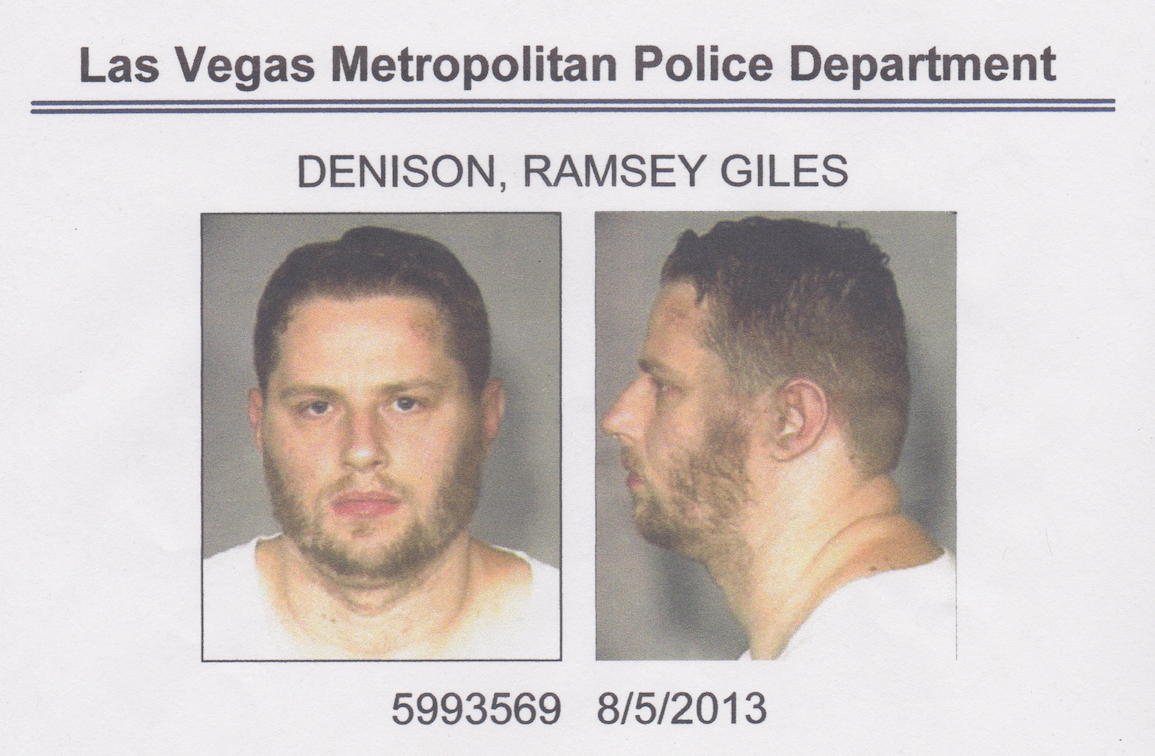 Denison spent a couple nights in jail, initially on charges of battery against a police officer. Upon his court date, the charges were later reduced to “resisting arrest.” The downgrade allowed Denison to plead “no contest” and earn a timely release. He was sentenced to 35 hours of community service, and forced to pay a $200 fine and attend group counseling. 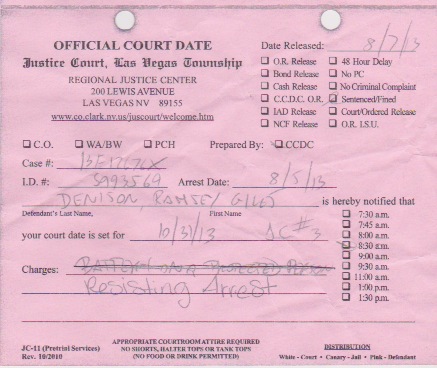 Enraged about the incident, Denison considered contacting a member of the media to tell the tale. “These are supposed to be public servants,” Denison says. “We pay their salary, so when they abuse their authority like that, it’s absolutely unacceptable.”

But then it occurred to him: “I am the media. Why don’t I just tell my story?”

Though Denison was perfectly happy in his editing gig, and had never in his adult years considered hopping behind the camera to direct, he set his mind to exposing the LVMPD in a feature-length documentary. The result was his 2017 offering, What Happened in Vegas. Its production, Denison says, “snapped my life into focus.”

The movie was honored in Las Vegas film festivals that year and later reached No. 1 on iTunes’ documentary film charts. It examined a series of LVMPD killings — police brutality victims who didn’t get a second chance at freedom the way Denison did, including one 2010 case involving a young Black adult male that bears some striking similarities to this year’s Breonna Taylor shooting.

In the run-up to the film’s scheduled theater release that November, Stephen Paddock opened fire upon thousands of Vegas concert goers from his hotel room at the Mandalay Bay Resort & Casino, killing 58 of them and wounding more than 400. Within a few weeks, Denison had stitched together a brief new opening to What Happened in Vegas and added 10 minutes to the end, acknowledging the mass shooting and insinuating that the LVMPD was protecting Mandalay Bay ownership, MGM Resorts International, so it could avoid liability costs to victims.

But Denison wasn’t terribly eager to produce a second documentary about police corruption in Las Vegas. He was drained from the What Happened in Vegas production, as well as its promotion, and says, “I was also scared after it had come out.” By that time, “If you’re in the LVMPD you know who the hell I am, that’s for sure,” Denison says. Such a truth seemed to have extended to all retired LVMPD officers, too, several of whom contacted Denison. However, to his surprise, they applauded his efforts. They also began feeding him intel about the recently elected sheriff — Joe Lombardo, who received campaign funds from MGM Resorts International — altering and even repressing information about the police response to the mass shooting.

In Money Machine, released on the third anniversary of the October 1, 2017, mass shooting, Denison leans almost exclusively on public information, witnesses and expert sources to craft a narrative of widespread wrongdoing in Vegas institutions after that night of horror. In order to preserve its status as a safe tourist destination — with a thriving economy built on lost gambling chips and slot-machine-gobbled coins — according to the film, the city’s power core seems hellbent on making the memory of that night disappear, while at the same time working to ensure MGM Resorts International’s reputation is no worse for wear.

There are also questions about the disappearance of some of the millions raised for the massacre’s survivors and the families of the dead, and almost predictable charges of victim legal representation profiteering. Denison even interviewed Stephen Paddock’s brother, Eric, and though the FBI said they found no motive for the shooting, Eric Paddock told Denison he believes his brother wanted to get back at MGM and Mandalay Bay for what Stephen perceived to be poor treatment. (If some of this is starting to sound like a 4chan conspiracy theory thread with digital cameras, light kits and editing software, one section of the film meticulously disproves a widely circulated story that there were multiple shooters involved.)

Denison says he had to deftly avoid active LVMPD officers on the street while producing Money Machine. He’d already come very close to getting arrested again near the end of filming What Happened in Vegas, after he and a production assistant launched a drone at around 1 a.m. to secure an overhead shot of police headquarters. “All of a sudden a freakin’ police helicopter comes and shines a light on us,” Denison recounts. “I got scared shitless.”

They landed the drone, threw it in the backseat of Denison’s car, and without turning on his headlights, Denison sped away. The helicopter continued pursuit onto a nearby highway and eventually, he says, about a half dozen police cruisers pulled him over. Denison and his aide were handcuffed and interrogated on site. Denison told them he was just looking to get stock footage for a TV show he was working on, and instructed one cop to check out a stock footage website on his phone that featured a Denison account profile.

The ruse seemed to work. Denison and his helper were uncuffed, but another officer began searching Denison’s car. The cop snapped pictures of individual pages of a log book of Denison’s, where he chronicled various shots he’d procured for his documentary as well as other TV shows he worked on. “Ironically, at this time I was working on a true crime show called Killer Kids, about kids who murder,” Denison says. Inscribed in the notebook — in piss-poor handwriting to boot, Denison admits — were phrases like “Take five seconds off that shot of blood on the guy’s head” and “Take knife scene out.”

Denison asked the photog cop if all that was really necessary, to which the officer informed him that he could revoke consent if he liked. Denison did, and he drove himself, his ticket for no headlights and his assistant home. “I was lucky to get out of that one,” Denison says. (I contacted the LVMPD for comment on the accusations Denison presents in his films and those of the more personal variety. They directed me to two already released reports on the mass shooting.)

Denison fled Vegas for Utah and conducted some additional work on the film. He also purchased clothes from a country-western store to create a disguise for his next visit to Vegas. Once back in Sin City, he donned a big cowboy hat, hunting goggles and boots while assuming a new identity: “Trent Spoonbauer, Montana cattle rancher whose shit doesn’t stink,” as Denison describes him. During downtime with his production assistant, they’d hit the blackjack tables and Denison, as Spoonbauer, would boast about his cattle and discuss married life involving his pretend wife, a short-order cook at a Chili’s restaurant named “Gretchey.”

In a more low-key turn, on other occasions he also says he’d pretend to be a tourist from Cincinnati by sporting a Reds baseball cap, and began utilizing small but high-quality digital cameras to film less conspicuously. “One guy who works security in Vegas told me that there’s a picture of me on the wall at Mandalay Bay that says something like, ‘If you see this guy, call the LVMPD,’” Denison says. “I believe it’s true.”

The subjects of his films are grateful to Denison for bearing such risks. Mikey Slyman, a Vegas native and friend of Denison’s, who also produced Money Machine and appears in the film, observes that Denison may be “a very eccentric character,” but “he’s really passionate about police corruption and he’s willing to throw it all on the line and put his own money up to educate people.”

“I’m former counter-intel,” adds Roger Kenis, an armed-forces veteran who survived the October 2017 mass shooting and appears in Money Machine. “Going into Vegas, where the whole town and the cops are basically on the take, it’s not an easy task. It’s scary. It’s intimidating, even just to think about what [he has to do], but some people still got to stand up and do the right thing.”

Like Denison’s first film, Money Machine has already garnered multiple film festival awards. Such praise, however, is secondary to him. “If you put somebody on epic blast and people see it, it’s out there in the world swirling around forever, can they really be so brazen the next time around?” Denison asks hypothetically. “I tend to believe they have to start to back off on the corruption. That’s why I do what I do.”

Michael Stahl is a freelance writer based in New York City. He's covered the arts and culture, sex and relationships, business and tech, history and politics and other topics for Rolling Stone, Vice, Vulture, CityLab, Quartz, Narratively and many more publications. Follow him on Twitter @MichaelRStahl and read more of his work at MichaelStahlWrites.com.