When a beloved American empire is based on explicitly racist stereotypes, do we try to cover it up? Or can we be honest for once about our ugly history?

Over the last few weeks, streaming providers have stayed busy yanking down episodes of beloved comedies because they feature blackface. The list of pulled shows isn’t short. Episodes of Saturday Night Live, 30 Rock, The Office, Community, Scrubs and Golden Girls were either removed entirely or edited to remove scenes that featured blackface characters.

Meanwhile, Jimmy Kimmel is taking off some time this summer after he apologized for his past use of blackface on The Man Show, the late 1990s/early aughts Comedy Central show he co-created with Adam Carolla that was intended to be unapologetically provocative. But the culture has changed; so what was deemed sharp and edgy back then, feels regressive and bigoted now. “I have long been reluctant to address this,” Kimmel wrote in his recent apology, “as I knew doing so would be celebrated as a victory by those who equate apologies with weakness and cheer for leaders who use prejudice to divide us. That delay was a mistake. There is nothing more important to me than your respect, and I apologize to those who were genuinely hurt or offended by the makeup I wore or the words I spoke.”

What hurt the most was that Kimmel chose to play Utah Jazz legend Karl Malone as a “dumb coon.” He reduced the NBA Hall of Famer to the level of a racist stereotype. The whole joke is that Malone talks like a racist cartoon, with lines like, “Karl Malone read on TV about white people getting deducted by aliens. Sticking all kind of hell up dey butt. And that’s a damn thing. Now, Karl Malone never seen no flying saucer hisself. But if he do, that’s gonna be a spooky time.”

Sarah Silverman (who started dating Kimmel around this same time) also did blackface on her Comedy Central show. Only when she did it, Silverman looked like a racist mammy-style salt shaker. In one skit, after spending a day in blackface, Silverman apologizes to a Black character by saying, “I’m sorry, you were right. It is so much harder to be Black than to be Jewish. I’d kill myself if I were Black.”

It’s obviously a good thing that various comedy stars and showrunners are offering public apologies for their insensitive use of blackface — or as Tina Fey referred to it in her apology letter, “race-changing makeup.” Yet, it’s their subsequent impulse to pull shows and edit out all the offending skits and sketches that seems less apologetic and more about brand maintenance than addressing systemic racism. It’s about protecting profits and legacies, not Black people.

Moreover, the sad fact is no one could ever possibly remove all the blackface from the history of American entertainment. Its roots run everywhere, and show up in everything Americans think of as funny. For instance, did you know the most famous blackface performer of all time is Mickey Mouse? 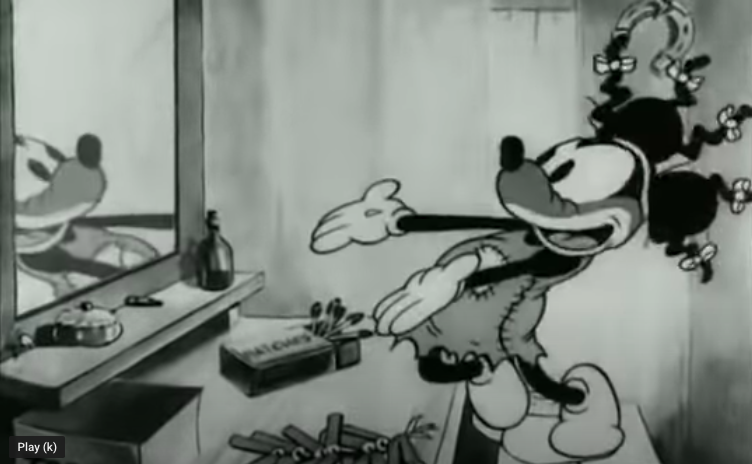 In his book, Birth of an Industry: Blackface Minstrelsy and the Rise of American Animation, author Nicholas Sammond writes, “Commercial animation in the United States didn’t borrow from blackface minstrelsy, nor was it simply influenced by it. Rather, American animation is actually in many of its most enduring incarnations an integral part of the ongoing iconographic and performative traditions of blackface. Mickey Mouse isn’t like a minstrel; he is a minstrel.”

If you desire hard proof of Mickey Mouse’s racist past, check out Steamboat Willie, his first popular cartoon short from 1928:

Throughout, Mickey and Minnie behave with the familiar “coonish” childishness of minstrel characters; they’re even dressed like them. The true umbilical connection, however, starts around 3:35. You’ll notice that when Mickey relies on the boat’s hook arm to grab Minnie from the shore and then unceremoniously drop her on the ship deck, sheet music flops out of her bag. But not just any sheet music; it’s a very specific song — “Turkey in the Straw,” the signature tune of Zip Coon, the co-founder of blackface minstrelsy. Even if you haven’t heard of him, Zip Coon inspired a song you definitely know: “Zip-a-Dee-Doo-Dah,” a title phrase that comes directly from the chorus of “Turkey in the Straw” (“O zip a duden duden duden zip a duden day”).

In 1916, about a decade or so before Walt Disney’s animators created Steamboat Willie, a Broadway actor named Harry C. Browne had recorded an updated version of “Turkey in the Straw.” Sung to the same tune, it was his first-ever hit album. Browne, however, renamed his version, “Nigger Love a Watermelon, Ha! Ha! Ha!” It’s often called “one of the most racist songs” in the history of American music. In other words, Disney didn’t pick “Turkey in the Straw” by accident, he knew exactly what it referred to — blackface minstrelsy.

There’s also another early Mickey Mouse cartoon — 1929’s The Haunted House — worth examining. Notice how once Mickey is locked inside the scary house, after the lights go out, as he’s wandering through the dark, both terrified and superstitious, he stops, and only his eyes, lips and gloved hands are visible. Mickey does a brief Al Jolson blackface routine, as he sings, “Mammy, Mammy!,” quoting the most famous line from “Mammy,” the most famous blackface song in American film.

Lastly, watch Mickey’s Mellerdrammer. It’s a short from 1933 that features Mickey and Minnie performing their version of Uncle Tom’s Cabin with a whole cast of cartoon animals in blackface. Rather than burnt cork, Mickey uses an exploded firework to apply an unmistakable fresh coat of comical blackness. It’s surreal to see Mickey’s slavemaster, Simon Legree, threaten him, “Bow down to your master! I own your body and soul!” and the plucky mouse in blackface responding, “You may own this body, but my soul belongs to the Lawd.”

But the wildest scene from their minstrel show is the faithful re-enactment of the “Flight of Eliza,” a story from Uncle Tom’s Cabin about an enslaved Black woman who tries to escape chattel slavery with her baby. As she flees the slave-catchers’ dogs, she must cross a half-frozen river, leaping from ice floe to ice floe, in order to finally be free.

Now, let’s be real — Mickey Mouse (or Disney) isn’t gonna be canceled on account of his/their minstrel past. But that also doesn’t mean we should ignore the fact that the beloved cartoon mouse is a continuation of a racist American tradition that demeaned Black people to make a fast buck. If anything, I’d argue that calling attention to Mickey Mouse in blackface is a good way to discuss systemic racism.

Along those lines, HBO Max recently elected to pull Gone With the Wind from its streaming platform (if just briefly), due to the movie’s glorified portrayal of racism in the Antebellum South. The chairman of its parent company, WarnerMedia Entertainment, called the move a “no-brainer.” And from a corporate perspective it was. But as Kareem Abdul-Jabbar pointed out in an op-ed for The Hollywood Reporter, it was also the wrong one.

“What we need is a way to present art within its historical context so the works can still be available and appreciated for their achievements but not admired for their cultural failings,” he wrote. “The easiest way would be to include an introductory explanation — filmed or written — that explains that the work contains harmful racial or gender stereotypes that were acceptable at the time but which we now know are harmful.” (Which, in fairness, HBO Max later did upon reflection.)

Removing offensive material should never be the “no-brainer” choice. We need to think about things. To do so, we need to keep the receipts. Because when you erase the evidence of racism, it starts to feel more like the cover-up of a crime than a heartfelt apology. Besides, Mickey Mouse is his past just as much as he is his future. This is equally true of America. In that way, racist Mickey Mouse is a good measure of how far we’ve come — but only if we’re honest about our ugly past first.