Mechanical Keyboard Maniacs Are Clacking Their Way Through Quarantine

Need a hobby? Why not completely relearn touch typing on a fully customized (and lubed) ortholinear build!

When word came down that his school would be moving all lectures and classes online, redditor Signynt saw an opportunity. Normally, the 20-year-old medical student was forced to bring his laptop to class, but now that he could attend lectures and write papers from the comfort of his bedroom, he could also throw himself headlong into using a click-clacking mechanical keyboard.

One might assume that the highly clamorous mechanical keyboard has been banished since the pandemic set in: Everyone’s working from home next to their spouses, family and/or roommates. But Signynt and others argue the opposite: Not having to worry about open-air offices has garnered more interest in the hobby than ever before. (Don’t believe me? More than 200,000 people have joined the subreddit r/mechanicalkeyboards since March.) “I’d always known the mechanical keyboard rabbit hole gets pretty deep,” Signynt tells me. “And now, I’m pretty deep down in it myself.”

Mechanical keyboard hobbyists have always been an eclectic group. Similar to sneakerheads, devotees can rattle off specific makes, models and colorways of particular keys, wires and switches. “The rabbit hole goes as deep as you want, in any direction,” Signynt continues. “But for many people, the keyboard is their most-used utility item, so wanting to perfect it comes naturally.”

Brian, a 26-year-old in Indiana who bought his first mechanical keyboard when he began working from home in March, certainly agrees. “I’m a newbie to mechanical keyboards, but I love how much they improve the typing experience,” he tells me. “Not to mention, they’re much more reliable, have a better look and feel and are easier to customize. I still only have one, but I’m aware how intricate the customizations can get.”

“Standard-issue keyboards are one of those things we’ve just kind of come to accept and live with, but I now know it can be so much better,” he adds. “With this keyboard, I love the sound and the mechanism so much more … I actually look forward to typing things.”

Signynt, who hosts his own mechanical keyboard YouTube channel, is skeptical that a mechanical keyboard can “magically make someone type faster,” but they do give you the option to customize the keyboard layout, which could help. “I find that customizing the keyboard to my liking has reduced hand strain, which prevents my hands from cramping up when typing for a long time, and thus makes it faster in the end since I need to take less breaks,” he tells me. “In the same way, athletic gear doesn’t make you run faster, but it makes it a lot more comfortable for you to push yourself to go faster.”

This presents yet another tunnel in the mechanical keyboard rabbit hole, but Signynt argues it’s not so much a preference as a realization that the universal keyboard layout is outdated. “QWERTY isn’t designed for modern keyboards and doesn’t make much sense ergonomics-wise, and updated layouts reduce the amount you need to move your fingers from the home row by placing the most used keys in the most easily accessible places,” he tells me. “Of course, you need to completely relearn touch typing, but after about two weeks of practicing, I was back at my original speed and now exceed it.”

For instance, Signynt uses the keyboard below when he needs to do video editing or write long essays. It’s the Colemak layout, an alternative to QWERTY. The top-left keys are now QWFPGL, and the ASDFG row becomes ARSTG. “The improved ergonomics reduces wrist and finger strain, and the blue switches give it a lot more *click*, which adds to the satisfaction of typing long texts,” he says. 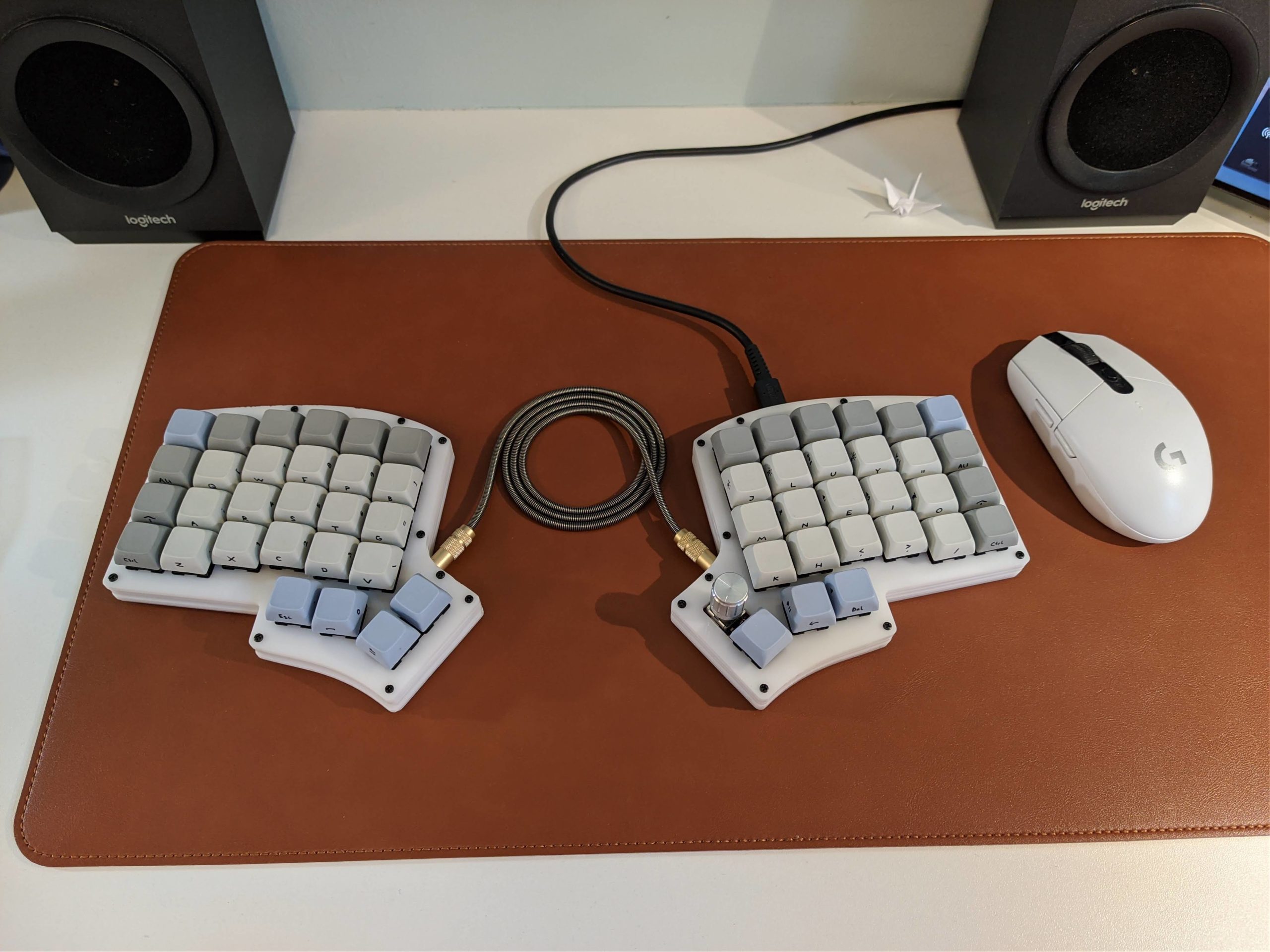 For almost everything else, he uses a hand-built mechanical keyboard that’s 40 percent smaller than a normal one. “I greatly prefer how this feels to type with and find it more comfortable,” he says. “Once you get the taste of a customized keyboard, and see what something built to your own specifications and preferences feels like, it can be hard to go back.”

That said, Signynt suggests people who work within earshot of others do some research before buying. “There are lots of different switches with all kinds of unique sounds and feels, so you can definitely avoid annoying your roommates,” he explains, adding that you could even take it a step further and engineer a sound that you and your roommates enjoy. “I’ve found that brown [switches], especially lubed ones, are pretty quiet and produce a deeper, almost wooden sound that I find satisfying.”

“There are lots of ways for people to make a keyboard their own — from the form factor, size and feel to the look,” Signynt continues. “It’s similar to building with Legos. You get the satisfaction of completing a project, and you can be proud of the keyboard that’s on your desk.”