Dude. Bro. Chief. Bud. Where Do All These Guy Nicknames Come From?

My Little League coaches didn’t know what to do with me, a slightly effeminate boy completely unenthusiastic about balls hurled at my face. (Today, nothing makes me happier, but that’s a different story.) As I picked dandelions in the outfield, they’d shout at me from the dugout, “Hey, bud, look alive!”

Bud. A decade later, I still hate it. There’s no nickname more condescending. I shiver when someone on the street stops me to ask, “Hey, bud, which way to the subway?” Sure, they mean well. They don’t know it gives me traumatizing baseball flashbacks. Lots of popular male nicknames, from “bud” and “buddy” to “big guy,” “dude,” “chief” and “boss,” are loaded with all sorts of hidden meaning, reflecting an amalgam of regional politics, social class, race and ethnicity. All of them seem to reinforce some element of traditional masculinity.

“Through most of history, most of the writers were men, so they created much of the slang,” says etymologist Barry Popik, once called “the relentless genius of American etymology” by the Wall Street Journal. It left us with a cadre of nicknames that continue to change meanings throughout the years. Let’s dive in, my dudes.

It’s hard to track down these nicknames’ origins, says Popik, who uses a variety of research sources, including online dictionaries, slang dictionaries, Google Books and newspaper databases in his research. Fortunately, etymologist Evan Morris, who writes the blog The Word Detective, has done the hard work on “bud.” It’s the shortened version of “buddy,” which has roots in the American South. The first “buddy” appears in 1788, according to Oxford University Press.

“‘Buddy’ was originally found largely in African-American dialectical English at that time, but quickly spread into general colloquial use, and eventually also became a form of address used with a person whose name is not known (‘Hey, buddy, gimme a hand here’),” Morris wrote in 2007.

A second “buddy” theory posits that it came from “butty,” the Welsh slang term for “companion,” which itself is derived from the 18th-century slang “booty.” No, not like “booty had me like” — this booty came from the sharing of booty, like Jack Sparrow-type pirates plundering for gold together. How sweet!

Today, though, I mostly hear “bud” used to greet a little boy. So don’t talk down to me — treat me like a real man and call me “sis” instead.

This one’s easy. “Chief” derived from the Old French word “chef,” meaning the leader of a group. That’s where we get titles like fire chief, chief of police and editor-in-chief. When the the guy at the bodega greets you with “Hey, chief!” know it’s a sign of respect.

Popik is ecstatic about the “incredible rise” of “big guy.” Over 740 books in the WorldCat library catalog system feature the term. My favorite title: “Florida’s famous animals: true stories of Sunset Sam the dolphin, Snooty the Manatee, Big Guy the panther, and others.” Big Guy the Panther? Honey, that’s my Grindr username.

The origins of “big guy” don’t have a large digital footprint, but we can all agree it’s become a pretty sick burn. Urban Dictionary defines the term as “an informal way of greeting a man or boy. Usually, it’s friendly and complimentary. It sometimes has a sarcastic tone, implying it’s time to take him down a notch.”

“Big guy” is a pretty straightforward commentary on the size of one’s body or presence, which is why it’s one of the most common nicknames to belittle.

While “big guy” is often condescending, “big man” is an honorific. It’s the center in basketball — think Tim Duncan, Shaq and Kareem — but it also comes from the term “big man on campus.”

Popik traced the phrase back to 1896, where it was written in the San Francisco newspaper The Examiner about Stanford’s football captain Charles Fickert and his coach, Harry P. Cross. “Captain Fickert has been disposed from his position of the most conspicuously ‘big man’ on the campus, for Cross is taller by an inch, and his six feet three is matched by magnificent breadth of shoulder and depth of chest,” the article reads.

One hundred and twenty-three years later, the big man is just “a male student who is highly popular,” Popik says.

“Bro” once meant “a self-absorbed young white guy in board shorts with a taste for cheap beer,” but more recently, it’s become “shorthand for the sort of privileged ignorance that thrives in groups dominated by wealthy, white, straight men,” according to Ann Friedman. But the term isn’t just a shortened version of “brother,” and it wasn’t always synonymous with white fuckboys, or even white people at all. One of our most hypermasculine nicknames has a rich cultural history going all the way back to 1530.

The term rose to popularity in the mid-20th century, Alex Abad-Santos wrote in a 2013 Atlantic Wire piece about the whitewashing of “bro,” citing a now-deleted OxfordWords blog. “It came to refer to simply a man (a synonym of “fellow” or “guy”), or sometimes more specifically a black man.” By the 1970s, the term broke free of its “brother” ties to mean any male friend. It lost its racial ties and became a colloquial term. Today women refer to each other by the term.

And there are countless variations of “bro”: “The Oxford English Dictionary now records at least 10 distinct words based wholly or in part on regional or colloquial pronunciations of ‘brother,'” Oxford University Press wrote in 2016: “‘bra’ (often spelled ‘brah’ in the United States), ‘bredda,’ ‘Brer,’ ‘bro,’ ‘bruh,’ ‘bruv,’ ‘bruvver,’ ‘bud,’ ‘buddy,’ and ‘Buh.'”

Modern brodom is truly in the eye of the broholder.

No male nickname is as ubiquitous as “dude.” “It’s one of the greatest of all American words,” Popik says. “‘Dude’ is extraordinary.”

Robert Sale-Hill “started the ‘dude’ craze” with his seminal poem “The True Origin and History of ‘The Dude,’” originally published on January 14th, 1883, in The New York World, Popik says.

In the 19th century, “dude” was synonymous with “dandy,” referring to a guy who cared too much about his looks, often to quite silly ends. (Yankee Doodle, with a feather in his cap, was one.) 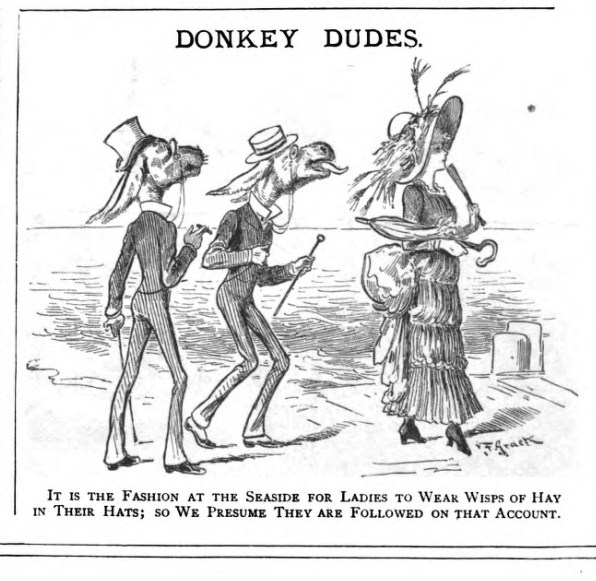 However, the modern-day use of “dude” originated first as slang for a “dude ranch” before finding popularity as a term for surfers in the 1960s.

Google Ngram Viewer charts the frequency of words and phrases as they appear in text. Though the data stops in 2008, “dude” has been surging since 1998 — right when The Big Lebowski came out, giving life to a larger-than-life dude called, of course, the Dude.

What makes “dude,” “buddy” and “bro” so awe-inspiring to this etymologist? There are just as many nicknames as there are types of men. “Little man,” “my man” and “my guy” — the list goes on. Slang terms become dated very quickly, Popik points out. But “dude,” now in its third century of usage, has stood the test of time.