I Used a Metabolism Tracker to Hack My Diet During Quarantine

Not sure about you, but I’m not exactly getting out and about these days like I used to. My girlfriend and I do take long walks a few times a week after work, but it’s not like it was pre-COVID. As such, I’m pretty sure I’m atrophying. Not to mention, my girlfriend is pregnant (thank you, thank you!), and I’ve found that with pregnancy comes food — lots of it.

Thankfully, my perception that I’ve let myself go these last four months isn’t the same as my girlfriend’s — she says I look basically normal — but I can’t help but wish I had a better handle on my diet than I’ve had recently.

The problem is, I love food.

I also, however, loooooove a good lifehack — and gadget. (Don’t worry, I’m fully aware of how basic I am.)

What do these things have to do with one another?

Well, if I can lifehack my way into getting smart about my diet — and use a gadget to do it — I’ve basically hit the trifecta.

Which is why I’m pretty sure the Lumen, a space-age gadget that purports to measure your metabolism levels in order to help you hack your diet, was meant for people like me. But for all its “It’s like the iPhone of metabolism tracking devices” vibes, is it the magic bullet I’ve been searching for?

Might be — if I could get the infernal thing to work.

The Problem: I wish I had a nutritionist in my pocket.

The Potential Cure-All: A nutritionist… in my pocket! No, seriously, Lumen’s website says the Lumen device — “the world’s first hand-held, portable device to accurately measure metabolism” — is like having a nutritionist in your pocket.

The Lumen works like this: Every morning, and then more throughout the day, you breathe into the device (it’s the size of an extremely large thumb), and the app-enabled Lumen spits back a metabolic score between one and five, one being good (i.e, you’re burning fat), and 5 being not good (in that you’re still burning carbs).

In addition to the metabolic score, Lumen also provides a daily nutrition plan based on the score you receive from that first blow, tracking for all of your personalized data points, a food library to find macros, healthy recipes and article after article designed to help you along your metabolic journey. 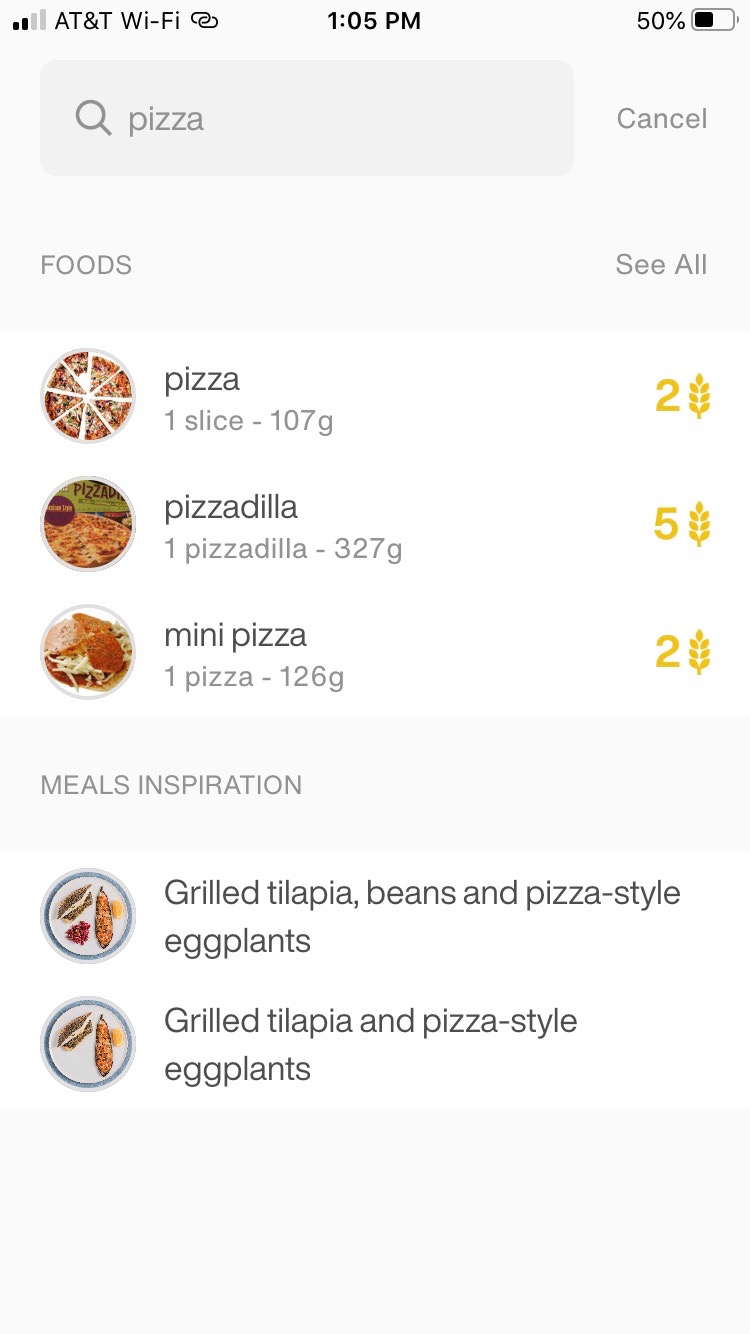 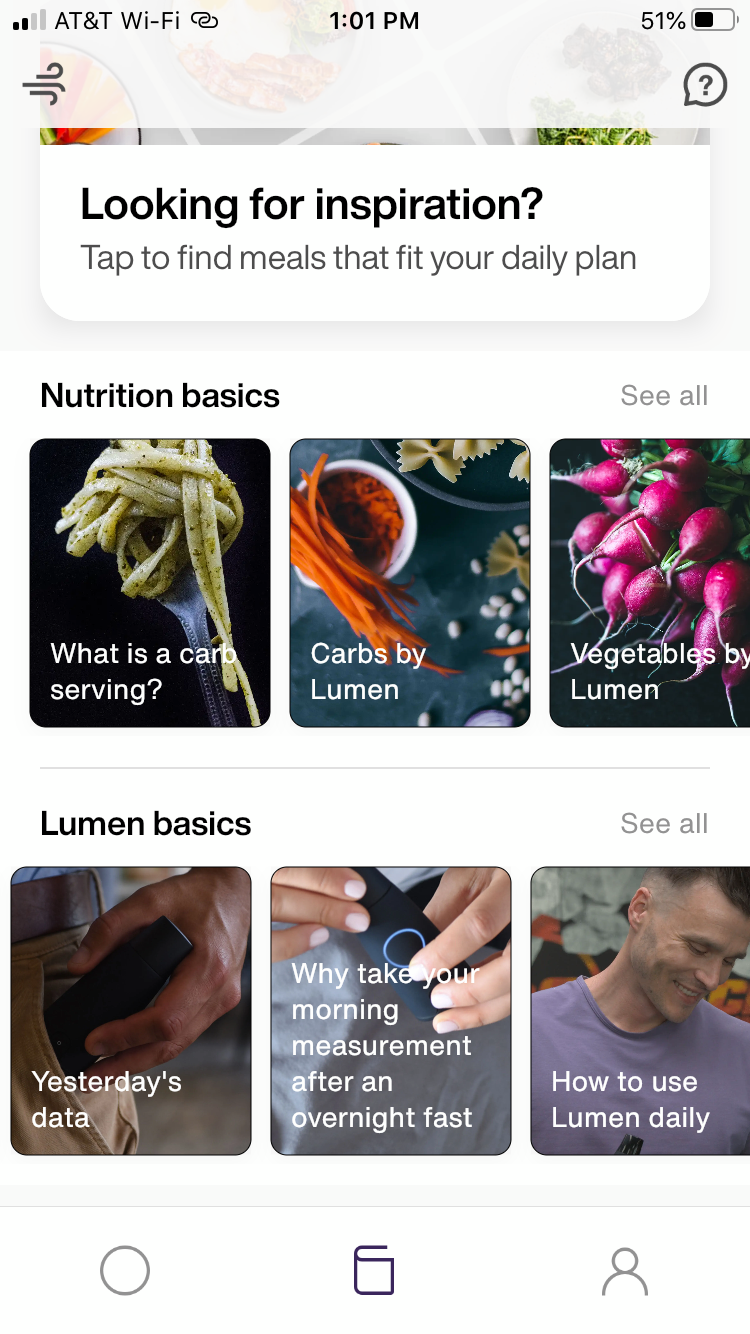 But Didn’t You Try a Similar Device Last Year?: Sure did, you eagle-eyed reader, you. Last year, around this same time (funny how summertime can make you feel weird about your body), I tried another breathalyzer tracking device called the Keyto, which claimed to measure the ketones your body produces (for the keto diet) to give you a similar metabolic score.

I lost about 10 pounds in a month using the Keyto. Unfortunately, the keto diet basically gives you every reason to eat nothing but cheese and meat as long as you’re on it, and I’m too young to keel over from a heart attack.

It was nice while it lasted, though.

The Science: According to the Lumen website, instead of measuring ketones like the Keyto, the Lumen “uses a CO2 sensor and flow meter to determine the CO2 concentration in a single breath. This indicates the type of fuel your body is using to produce energy.”

Sounds cool — lemme get a PhD real quick so I can understand what the hell that means. Personally, I think they like keeping it jargon-y sounding because it sounds more scientific, but they do have a few studies on the site if you need more proof of the device’s bona fides.

The Hardest Part of Living Under Quarantine With a Pregnant Person: My girlfriend is awesome: Witty, tough, smart, unapologetic — there’s no one I’d rather be hanging out with on a lazy Sunday than her. And life in isolation with her has been pretty easy. A few tears, maybe a couple of bodily noises (“It’s the progesterone!”), but otherwise pretty, pretty easy.

But the food. She (excuse me, the baby) has to eat an extra 300 calories a day, she reminds me, and dammit if I don’t want to eat 300 extra calories a day, too, in, um, solidarity. I guess there’s a reason why soon-to-be fathers are at risk of so-called “sympathy weight,” especially in the second trimester.

The Experience: The first thing to understand about the Lumen is, it’s not cheap (it retails for $299, to be exact). For comparison’s sake, the Keyto was $100 less expensive. When it arrived, I half expected it to be wrapped in gold leaf; sadly, it was not. 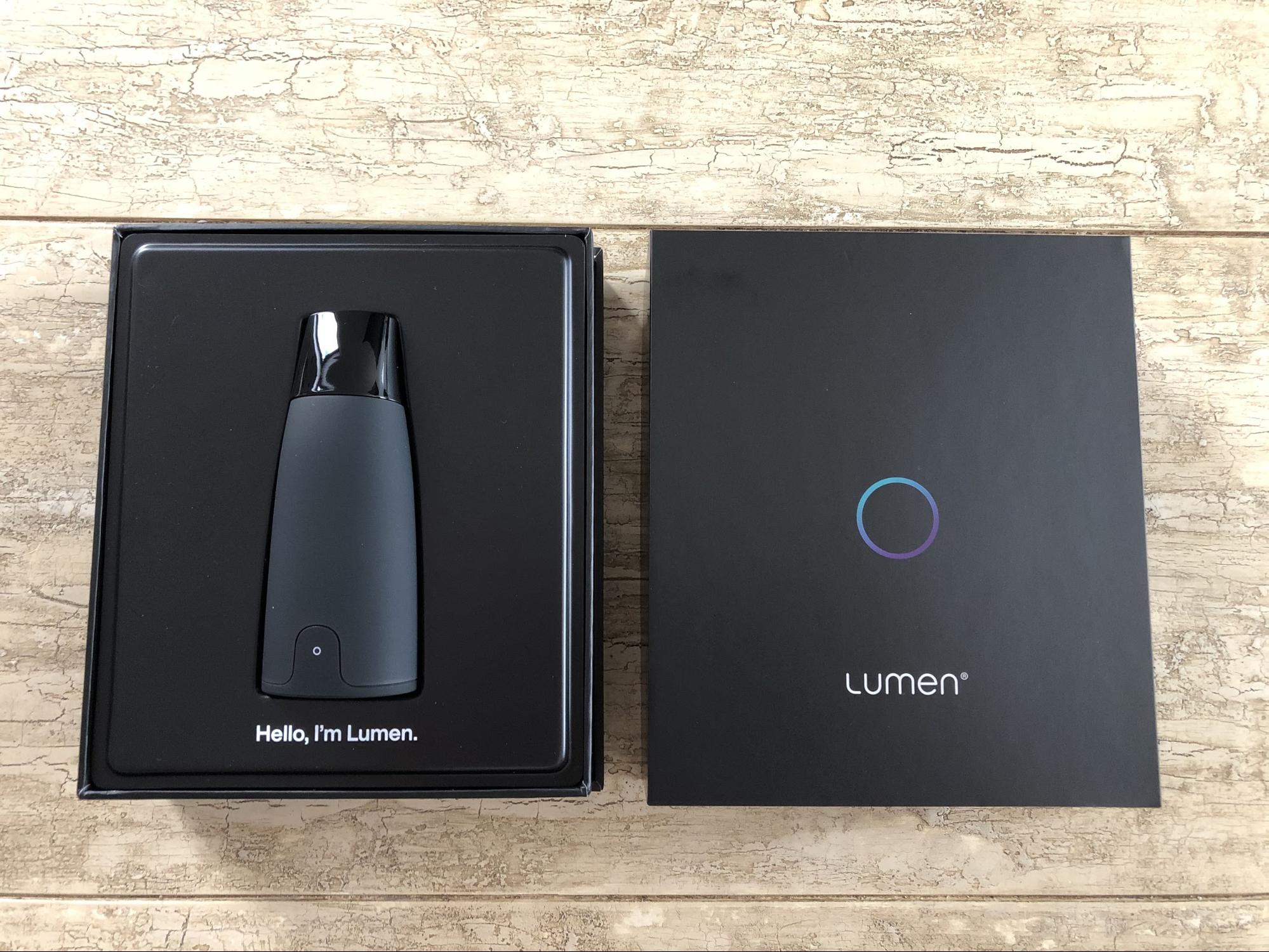 But as I said, I love gadgets, and I especially love gadgets that think they’re made by Apple (see: the above packaging), so I tore right into it like a kid on Christmas. I immediately downloaded the app and began playing around with it — I wanted to try it out right away.

Therein lies the first — and really, last — problem. I couldn’t get it to work. When you first fire it up, the Lumen asks you to go through a set-up process in order, I think, to calibrate itself to your lung capacity, in which you inhale and exhale into the Lumen repeatedly.

I tried multiple times to get it to accept my breath — each time, it said I was either breathing too quickly, or not quickly enough. I gave up after 30 minutes on Day 1.

A week later I finally got it to work, but by that time, I wanted to chuck the fucking thing out the window and never use it again.

Why I Think I Couldn’t Get It to Work: Memo to anyone who’s ever won a school-wide “What’s your lung capacity?” competition, like I did junior year of high school: When you’re an adult, and someone (or in this case, something) wants to measure the volume of air you can breathe in, don’t use it as an excuse to relive your glory days and inhale so much air you think you’re going to pop.

That’s why I think I couldn’t get it to work. It seems how the Lumen measures the power of your breath when you’re calibrating the device is dependent upon how much air you initially inhale. When I inhaled as much air as I could, it didn’t think I was blowing enough out when it came time to exhale. I finally got it to work when I reset the whole device and then only inhaled a normal amount of air. At last, I was able to get past the first screen.

Calibrating… Calibrating… : Unfortunately — and again, this thing is beyond obnoxious with all the hoops it makes you jump through — you’ve only done exactly that: Made it past the first screen. You cannot start using the Lumen then and there. You next have to “calibrate” it to your metabolism, and that takes an entirely different day. I just ignored it for another week; it wasn’t until, like, Week Three that I actually used it for its intended purpose.

Back to the Experience: I bet you’re wondering if the damn thing even did what it was supposed to — i.e., measure my metabolism and then recommend nutrition plans. The answer is, sure, once I got it to finally work. But even once it worked, it wasn’t easy to use; each measurement took multiple breaths, and sometimes the Lumen would fail and I’d have to start over. The nutritional recommendations were kind of a drag, too. The “plans” provided serving portions of different macros like carbs, protein and fat, but they were far more abstract (15 grams of carbs!) than helpful (15 grams = one breast of chicken!), making it hard to put the plan into action. 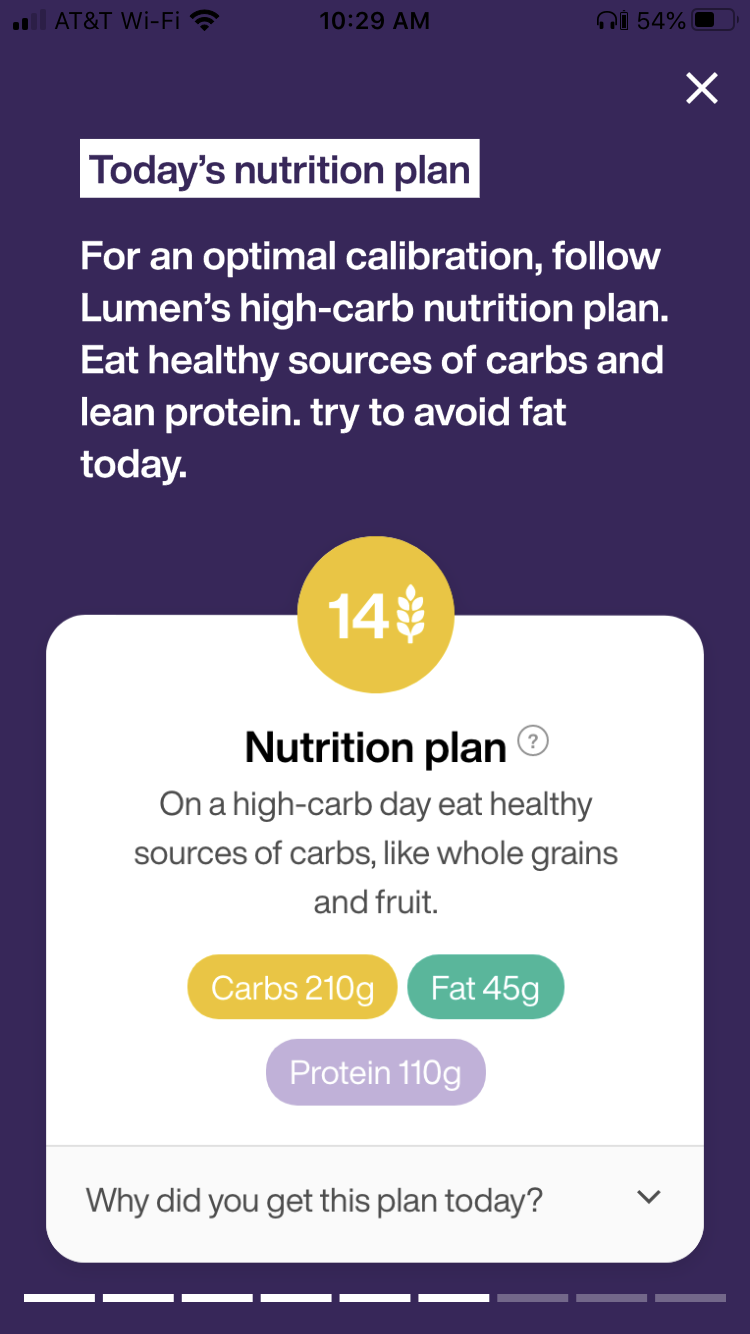 Not that I needed to — I consistently blew a 1 and a 2 on the device each day, which meant I was constantly burning fat, and not carbs, at least according to Lumen. I blew into the Keyto for comparison, which contradicted the Lumen and said I was still burning carbs. I’m not sure which device was right, but my money’s on Keyto, sadly, if only because Keyto definitely worked when I used it last year.

The Result: I don’t know if I’d recommend the Lumen for casual users. If you’re not cooking for anyone else (like a pregnant girlfriend), and you can diligently apply the suggested macros to your diet, it might be worth checking out. Same for if you can get it calibrated without throwing it in the trash.

But if you’ve got a partner begging for rigatoni with sausage and peppers once a week, it’s going to be pretty hard to shop for and then portion out the perfect amounts of protein, carbs and fats you need to keep up — remember, the serving sizes depend entirely on your breath each day!

And so, the moral of the story for me: When you and your partner are 20 weeks into a pregnancy, there’s no sense fighting it, especially with complicated gizmos — no matter how hefty and cool the gizmo looks and feels. Instead, just say, “Fuck it, I’m gonna be somebody’s dad soon,” and eat what you want.