Retirement isn’t an option when you’re flirting with bankruptcy

The last time Manny Martinez, 58, was out of work, the price of a gallon of gas was $1.15. The year was 1990, and Martinez, then 28 years old, was offered a job making $30,000 a year working on the floor of a drum manufacturing company in Valencia, California. “We ran smoothly for nearly 15 years [once Martinez was promoted to manager], up until March, early 2020,” he says. “All of a sudden coronavirus started spreading, and March 20th is when the hammer dropped and the governor of California immediately shut down all non-essential working environments.”

Two months went by before Martinez, already on furlough — a mandatory unpaid suspension from work, but with benefits intact and the expectation that he would return to his job — began receiving letters in the mail from the president of the company. “He was sending out general letters to keep people up-to-date as to what was happening,” says Martinez. “In the second letter, he said, ‘Our executive management is reviewing our business industry-wide and working on a program to bring us back. But at the moment, we’re not sure if we’re going to have the business to bring everyone back.”

Up until they cut off everyone’s emails, Martinez tells me that he was still able to “look at some reports” and what he gleaned from those reports “looked really bad.” “When they finally reopened, they reopened with only office personnel,” he says. “As I understand it, there was no one in the factory, because I wasn’t part of that recall team.”

By that time, a third letter had gone out. “I think it was four letters altogether,” he says. The third one he remembers stating something like, “We, unfortunately, as much as we want to bring everyone back, we can’t afford it. We don’t have the business.”

The very last letter, Martinez says, was merely a formality. “‘Regretfully, we have brought back all of the staff that we think we need thus far to keep [the company] alive with the very little business that we’re receiving now,’” Martinez reads from the letter. “‘Everyone else that is still on furlough will be laid off before the end of September,’” which, of course, included him.

After nearly 30 years and approximately 60,000 hours of dedicated work for the same employer, and still four years away from being eligible for Social Security benefits, Martinez was replaced by his younger apprentice, more than 20 years his junior. “I trained him,” he says. “We all trained him, and then 10 years later, because he’s basically cheaper than me, not only did he get a promotion into another position, but he absorbed my responsibilities as well.”

Naturally, Martinez was hurt. “There was a little period there that I pretty much drank everything that was in the house,” he says. “You go into a state of depression right away.”

According to AARP, when the overall unemployment rate in the U.S. spiked from 4.4 percent in March to 14.7 percent in April, the unemployment rate for men 55 and older soared, too, from 3.4 percent to 12.1 percent. The unemployment rate for women 55 and older rose even more, from 3.3 percent to 15.5 percent. But while the employment impact of the pandemic greatly affected people from every generation, Boomers like Martinez were the most likely to have been initially put on furlough. According to a report from Next Avenue citing data collected by TransAmerica, 16 percent of Boomers had been furloughed due to the pandemic, compared to only 11 percent of millennials and 8 percent of Gen-Xers. But again, for workers put on furlough, the expectation, at least initially, was that their jobs would be there once things reopened. Which explains why, according to the same report, a vast majority of Americans — 91 percent, according to a Federal Reserve survey — who lost their jobs in the pandemic anticipated they’d return to work for the same employer when the situation would allow. 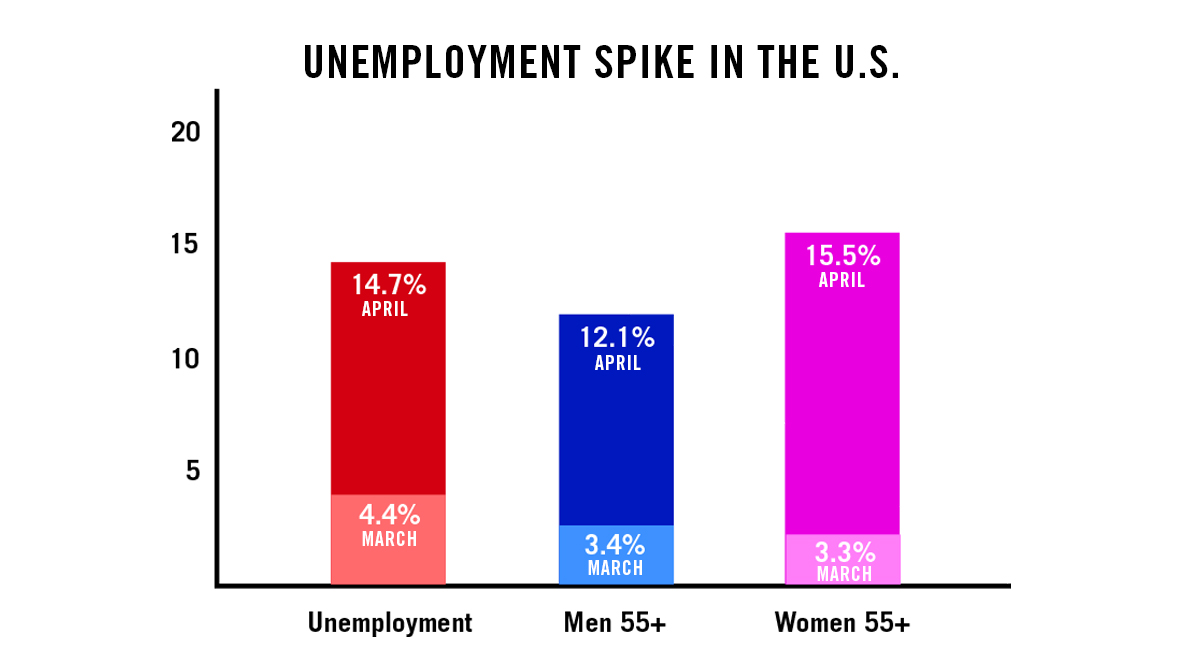 Amongst that 91 percent is 58-year-old Gem Moultot. “To date, I’m still on furlough,” she tells me. Moultot is an administrative assistant for another manufacturing company with which she’s been employed for the past 17 years. When I ask her if she knows when she might go back to work, she tells me, “That’s still a big question. As of today, I don’t know yet.”

Moultot, like Martinez, has also received letters — two so far, the last of which says that unless otherwise notified, “You should consider yourself laid off permanently.” But, she says, unlike her nearly 250 colleagues who have been laid off, she hasn’t yet received her severance package. “I’m not sure yet because I know they’re in the process of laying people off,” she says. “We’re just waiting to get another letter and another letter. Every day it’s a scary day because I don’t know what’s going to be coming in the mail.”

A paper from University of Chicago economists at the Becker Friedman Institute estimated, back in June, that 42 percent of jobs eliminated in the pandemic aren’t coming back. And according to data from The Urban Institute, people 62 or older who lost their jobs in The Great Recession were far less likely than younger workers to get new ones. “Unemployed older workers who ultimately got hired found themselves out of work 50 percent longer than younger people, on average,” reports Next Avenue.

Which is why Martinez and Moultot aren’t wasting any time. “After the second month, I started casually putting my resume online, just putting my toe in the water and stuff, seeing what kind of jobs were available,” says Martinez. “I got a handful of calls. Then I threw my resume everywhere — CareerBuilder, ZipRecruiter. Just about every recruiting company I could find online, I sent my resume to.”

The reality, though, according to Gary Burtless, a senior fellow in economic studies at the Brookings Institution in Washington, DC, is that at 58, Martinez and Moultot’s work experience becomes a burden, rather than a benefit. A colleague of Burtless recently conducted a study wherein he sent resumes to a variety of employers, ensuring that the only difference between the two applications was the age of the person at the time of submitting the application. “Everything else about the application is identical,” says Burtless. “The same levels of schooling, the same amount of recent work experience in the industry and so on.” Burtless’ colleague then monitored which job applications employers were more likely to respond to. “There’s evidence, both for men and for women, but especially for women, that every year of age past 45 or so gives you a declining rate of response for employers,” says Burtless. “They don’t call you back to say, ‘Can we arrange a longer interview?’”

That doesn’t mean, he says, that they would hire a 21-year-old instead of a 35-year-old. “But it does mean they would prefer a 35-year-old over a 55-year-old, or a 62-year-old, or a 50-year-old,” Burtless tells me. According to a report in the New York Times, even in the best of times, on average, a 54-year-old seeking a job will be unemployed for nearly a year.

In part, this is because employers see workers past the age of 50 as less productive and more difficult to train because of bad health or their perception of declining cognition, according to Burtless. But it goes beyond that too. His research has found that, more than anything else, health insurance is a pretty reliable differentiator for employers. “In other words, it does cost more to put an old person on the payroll, given their higher likelihood of cancer and heart attacks, and complications from things like the flu or COVID-19,” he says. “That one is at least a rational bias.”

Less rational is the fact that employers tend to think that older candidates are closer to retirement than they actually are. “If you hire a 58-year-old worker, they’re going to continue to be in the labor market for 10 years,” says Jeffrey Wenger, a senior policy researcher at the RAND Corporation. The median tenure for workers age 25 to 34 is 3.2 years, compared to 10.3 years for employees age 65 and over.

Indeed, both Martinez and Moultot insist they’re far from retirement. “I’m not that young, but I’m not ready to retire,” says Moultot, who plans to work until she’s 70. “If I have to work at Walmart as a greeter, I will do that just to get out of the house and work.”

Further dimming any hope Moultot and Martinez have to find another job is the fact that as workers in a factory, they’ve spent 30 years of their life developing what Wenger refers to as “firm-specific skills,” i.e., procedures and policies that are specific to a given company. So if you’re a middle-skilled worker who did some kind of manual labor, manufacturing work, assembly work or even middle-level management work, a vast majority of your knowledge about the inner workings of the company is suddenly obsolete, and all those years turn to dust.

“What ends up happening is a lot of these people die,” says Wenger. “The excess deaths for people who experience these kinds of significant layoffs are higher than for people who don’t.” Research from UCLA on job displacement and mortality indicates that there’s a particularly pronounced increase in death “during the period immediately following job loss and a long-run increase of 10 percent to 15 percent in the annual probability of dying persisting for at least the next 20 years.”

Martinez compares the feeling of unemployment at 58 to feeling like “your whole world’s just been cut off.” “The first two, three, five weeks, six weeks, it feels like a vacation,” he says. But when you get into the third month, Martinez explains, you begin to lose purpose for getting up on a Monday morning. “I had to literally look at all of the projects that I need to do around the house and literally write them down and schedule them: This one for this day and this one for this day, so that I could spread my time across the weeks.”

But even then, Martinez knows he can’t afford to be without work for very long. Furthermore, he’s unlikely to recover his near six-figure salary. “I’m going to be making at least 30 percent less,” he says, based on what he’s seen in the job market. According to a report from ProPublica, only one in 10 workers past the age of 50 ever earn as much as they did before their employment setbacks.

Moultot tells me that though her husband is still employed, she, too, needs to get back to work. “Right now I cannot be picky, but I can’t be a delivery driver or something like that,” she says. “I will take anything administrative. I can work in a warehouse. But of course, if there’s a choice, I will take the administrative [work].”

Martinez is in a slightly more precarious position. “I was already mentally preparing to file for bankruptcy,” he says. Thankfully, he has an interview next week. “I’m sure there’s going to be many people out there in the same situation,” Martinez says. “When you’ve got a mortgage, two car payments, credit cards and whatever else comes along, and suddenly you go from making a good salary to making I don’t even know what the hell I was collecting [on unemployment], even a third of that, it’s virtually impossible to tread water for very long. At some point, you’re facing the devil.”