Just What Is a Male Witch, Anyway?

Though some may go by “Wizard” or “Warlock,” the majority of men involved in magick, Paganism and Wicca are happy to be known by one familiar term: witch.

Being a culturally feminine word, witches are often assumed to be women, but historically, the figure of the witch has transcended gender. Today, there are an estimated 340,000 to 1 million witches in the U.S., many of whom are men. Ahead of Samhain — that’s Halloween to you basic witches — MEL will be exploring the world of male witches through the lens of three contemporary practitioners, but first, let’s pin down exactly what it is we’re talking about when we talk about male witchiness.

So how does one go about being a witch? According to Allan, a Welsh witch living in Kazakhstan, the process has become much simpler in recent years. Pre-internet, he tells me, taking on the witch identity required initiation and community. “The reality is that things have changed greatly since I started out back in the early 1980s,” he says. “Back then, the only realistic option for joining Wicca was to get initiated into a coven. These days, although coven Wicca still exists and thrives, many people choose to be solitary (‘eclectic’) Wiccan instead. There were few, if any, solitaries in my day.”

Without a coven, there are few rules defining how one formally begins their practice. “You don’t need to do much more than self-identify as Wiccan to be Wiccan,” Allan says. Admittedly, even in his own case, being a witch didn’t necessarily begin with finding a coven. “Prior to my initiation, I’d already established that special places like waterfalls had a ‘religious’ significance to me, due to the sense of the Other I felt in such places,” he explains. “Back then, the appeal of Wicca to me was that I could translate that experience into a reverence I could express when not physically in such a location. Essentially, that hasn’t changed over the years.”

“With that in mind, when people ask me how to become Wiccan, I don’t recommend reading books or watching videos, but rather I suggest spending time out in nature in quiet contemplation of its beauty,” he continues. “If you do that and develop the love for it that I did, then the means of expressing that will follow organically. That, of course, isn’t a gendered outlook. It can be applied by men, women and anyone else.”

Basically, if you think you may be a witch, that’s your decision to make.

The day-to-day of a male witch varies from person to person. For the most part, their lives might look just like anyone else’s –– work, family, taxes. Some may worship specific gods/goddesses, while others may feel a closeness to a “Higher Power” or a place like the ocean or woods (a la Allan). There are a variety of practices a witch might employ to bolster these relationships, which may dictate an essential part of their daily routine, or may be more akin to just going to church on major holidays.

As for what these rituals look like, they can indeed look like what you’ve seen in film. Witches make potions, create charms, use cauldrons and chant over candles. Some utilize herbs, water “cleansed” by the light of the full moon, crystals, tarot cards, mirror scrying (in which one paints a mirror black and focuses upon it in order to see images or visions) or place curses and banishments upon others. Some simply pray and meditate.

Do they perform magic as it looks in Sabrina the Teenage Witch, with the zap of a finger? Maybe some try. But for others, witchcraft is more about intention and ritual, producing results over time with effort and care.

For Allan, his relationship with Wicca varies depending on his schedule and the time of year. He spends six months annually working away from home, making it challenging to follow his routines. When he’s working, he’s able to complete “the odd mantra, the odd meditation, but not too much more.”

When home, however, he has time for actual ritual. “I’ve built shrines at several locations along the hillside. It’s about a 90-minute walk around the shrines, lighting candles there. I do this a few times a week, and in each case, I follow up with a ritual at home.”

Beyond his personal rituals, he’s also active in his coven when not traveling. “We have coven meetings at each of the sabbats for rituals to celebrate the cycle of the seasons, and occasionally meet at the esbats if there’s magic, usually healing, we want to do,” he says. There are typically 12 esbats a year, corresponding with the full moon, and eight sabbats. Halloween is one such sabbat, representing the Wiccan new year.

Though witches like Allan emphasize that the practice of witchcraft is far more about one’s beliefs and mentality, there’s a thriving economy of shops selling psychic oils, problem-solving candles, symbolically-significant candles, how-to guides and other wares. Some even sell through Amazon. 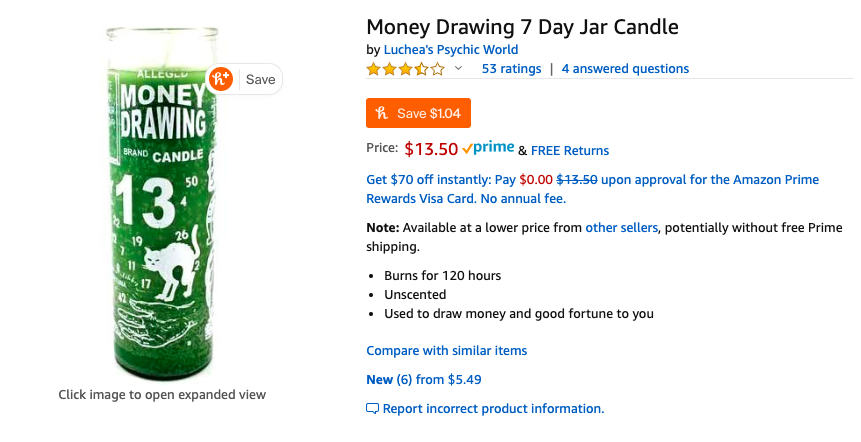 Just as with other religious traditions, many rituals in witchcraft do indeed require specific ingredients, some of which may not be available at the local grocery store. Candles of particular colors represent different meanings (blue, for example, represents physical protection), and various herbs hold specific properties that, in many styles of practice, are essential to procure the desired result.

Increasing in specificity, certain styles of witchcraft even incorporate products intended to resolve particular problems. “Make Opposing Lawyer Stupid” candles and money-attracting and jinx-removing oils are just some of the products intended to address distinct issues. These items typically involve a ritual beyond, say, just lighting a candle. For example, on WisdomProducts.com, the aforementioned “Make Opposing Lawyer Stupid” candle is sold with the following instructions: “Burn ‘Make Lawyer Stupid 50 Hour Candle’ 2 days before consulting with an attorney or going to court. Write your wishes regarding the pending case on parchment paper and place beneath the candle. Light the Candle and let burn until it is completely out. Take the parchment paper you had written your request on and carry it with you the day of your court case or meeting.” It’s currently out-of-stock on the site (and its price is unlisted), but similar candles go for $3 to $8.

While the average dude might think these products are pointless, for those of the faith (particularly those who follow culturally-specific forms of witchcraft like Santeria, Brujeria and Voodoo, to be explained later this week), these items work because they believe they will. This is ultimately one of the core facets of witchcraft: “Witchcraft is the magical manipulation of energy to bring about change,” as per witch-encyclopedia site Witchipedia.

Knowing Which Witch Is Which

The term “Witch” is considered a broad identifier, similar to how “Christian” can indicate a large set of fairly disparate beliefs. According to Wicca.com, Wicca is founded upon pre-Christian practices originating from Celtic traditions, but by the above analogy, to be Wiccan is akin to being Baptist or Protestant, as it indicates a certain regimen within an ideology.

Paganism, meanwhile, sits somewhere around Wicca and witchcraft more broadly. “In a nutshell, here’s what’s going on. All Wiccans are witches, but not all witches are Wiccans. All Wiccans are Pagans, but not all Pagans are Wiccans. Finally, some witches are Pagans, but some are not — and some Pagans practice witchcraft, while others choose not to,” says LearnReligions.com. If that’s just made you even more confused, basically, it’s all a matter of choice and interpretation.

As for the whole wizard/warlock differentiation, there’s some debate. By Wicca Daily’s definitions, most witch-related terms are gender-neutral, but they do indicate skill, seniority and ethics. A wizard could be any witch of advanced skill, while sorcerers are the most advanced, elite of the wizards. Warlocks, however, are distinctly male –– but not male witches. Instead, warlocks are evil male practitioners of magick, traitors of the art. The female version of a warlock might be called a wicked witch, says MysticInvestigations.com.

Thus, the vast majority of men who practice magick identify as witches. And while Harry Potter and pop-culture lore may call them wizards, that’s an honor most have not yet earned.