Predictable, badly written and fake-feeling, all virtual reality does is make the same tired scenes bigger

I’m lying on a bed in a well-lit room, my hairy, masculine legs stretched out in front of me. I have a flat chest, a bulging package and the interior-decorating sensibilities of a newly divorced dad who wants his suburban guest bedroom to look presentable for his soon-to-be-visiting adult son.

Before I have time to question how that line made it into the script, she sidles up next to me and starts to run her fingers down my chest toward my nether regions. I can almost feel the warmth of her hands through my boxer-briefs as she inches closer to my junk, and I imagine what it must feel like to get hard. “You know this is an emergency,” she says. “I know you’re always willing to help me out in an emergency.” As she begins to straddle me, it becomes readily apparent this is the kind of emergency only 40 minutes of aerobic activity with my fast-hardening cock can solve.

Though I’m actually a cis woman wearing a VR headset alone in my bedroom, I feel like I’m just the man for the job. This is virtual reality, after all. You can be anyone you want — or so I’m told.

I decided to do my best to find out.

“Kendra Spade is your stereotypical millennial. Sexually liberated, progressive, and of course, she makes her money as an influencer on the Gram. Today though, she’s had her profile shut down. Although she claims she didn’t breach any of the terms and conditions, the last photo she posted of her bare ass wasn’t exactly SFW. Anyway, Kendra now needs a shoulder to cry on, either that, or a dick to suck. Despite her entire source of income disappearing in the blink of an eye, Kendra is hornier than she’s been all week. It’s time to get under the influencer.”

It was perfect — so cringingly contemporary in its unholy union of virtual reality and social media that I couldn’t look away. 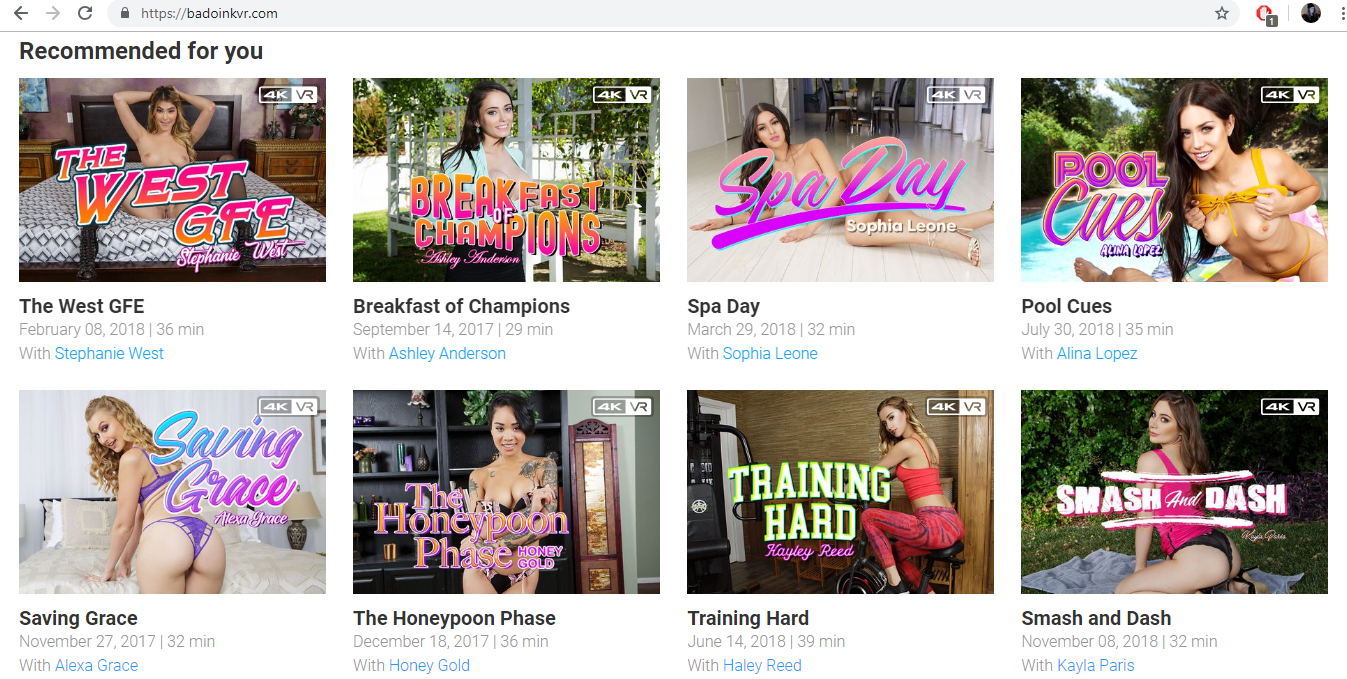 As the video loaded, I wondered what sorts of sensations I was about to experience. I’d been told by Richmond and others that VR gives you the ability not to just watch, but to experience something. Would comforting Kendra with my pixelated penis feel real, like I was really there? I fully expected to feel sensations I’d not known possible, and was excited to find out what it was like to be inside — gasp! — an influencer.

At first, the video really delivered. I was blown away by how realistic the view through the Oculus Go was. Aside from a bit of pixelation and blurriness toward the outer edges of the frame and the way it gently squeezed the blood out of my brain, it had almost the exact same depth perception as natural human sight. That meant that while Kendra blabbed on about losing 100,000 followers and the ability to target them with ads, I could shift my gaze away from her face and down toward her crotch, which looked as close to my face as any crotch has ever been in my life. I also made sure to check out the curtains behind her. They looked nice. IKEA, maybe?

Next, Kendra climbed on top of me. The image of her felt so present that my body seemed to sink and move with the bed as she shifted her weight. She whispered something into my right ear, begging me to show her a “really good time.” Her breath was hot, and the swish of her whisper bristled my skin. We locked eyes — VR eye contact is amazing — and she asked me if I liked watching her suck on her fingers like she’d suck on my cock. Though no one could see me doing so, I nodded yes anyway.

However, the magic instantly faded once she started to give me head. It was the strangest thing — the moment my cock was in her mouth, the video started to look and feel no different from the porn you can find on any tube site anywhere, ever. Instantly, I knew why — the most enticing quality of VR is that you can look almost anywhere in the scene and see it with similar dimensionality and perspective as real life, but when your head is still and you’re just looking straight ahead at the action, it doesn’t seem half as immersive as it does when there’s movement.

By this point, too, the blurriness and the pixelation I’d initially been able to ignore started to mess with my vision. My head felt pinched, and my eyes felt like dry balls of trash. A sense of nausea — spawned by the disconnect between sitting still in reality and moving around in surreality — crept in as well. I ripped my headset off and spent the rest of the day feeling like a vertigo-ridden Lucille 2 in Arrested Development.

As for how VR fits into this equation, while Richmond still thinks it has a ton of potential — especially in conjunction with teledildonic sex toys — she also envisions other technologies like augmented reality and deepfakes becoming a bigger part of people’s sex lives. “Tech that actually implants a viewer in the scene is coming,” she says. “There’s really no barrier to what you can experience, the tech just has to catch up.”

When that time comes, I’ll happily get back “Under the Influencer.”