In ‘She Dies Tomorrow,’ the End Is Always Nigh

This unnerving psychological horror film will hit harder during the pandemic. But its brilliance transcends the COVID era, speaking to a universal feeling that something terrible is forever heading our way.

Don’t underestimate the circumstances in which you watch a movie. The night of March 12th, I drove to a screening that I was nervous to attend. Quarantine lockdown hadn’t happened yet in L.A., but you could sense things getting tense — that the world was quickly changing, turning darker and scarier. I wasn’t sure if I should even be out considering the reports of how contagious COVID-19 was. When I arrived at my destination, I had to drop my car off at the valet station, and the guy who took my keys had rubber gloves on. We barely made eye contact, as if simply looking at someone could get you infected.

In the small screening room, a colleague and I sat several seats apart, and nobody was really talking. The theater was filled mainly with the filmmaker’s friends and creative team, and they all just seemed anxious — either because of nerves of showing a new film or because we were all thinking about this strange new virus and the unknown devastation it was capable of unleashing. Then the lights went down and we watched an 84-minute psychological horror movie about a weird invisible contagion that inexplicably gets passed from one character to another, leaving each of them convinced that they’ll die tomorrow. The film couldn’t have been more sickeningly timely — an unstoppable disease, the grim thought that life as we knew it was over — and when the lights came back on, the filmmaker turned to the audience and asked if anybody had any questions. A hand went up: “Yeah, how did you know about… everything?”

Four months later, She Dies Tomorrow will be available for streaming, and you’ll get to experience that same queasy sensation that I did when writer-director Amy Seimetz unveiled her weird little pseudo-thriller that night right before the pandemic took hold of America. Seimetz couldn’t have possibly predicted the coronavirus crisis, but there will undoubtedly be a temptation to praise her remarkable film as prescient. But the movie isn’t incredible because of fortuitous timing. It’s incredible because she has managed to articulate an existential, ineffable terror — a terror that has always been with us — in such fascinatingly opaque ways that it’ll apply to a dozen crises after this one. She Dies Tomorrow creates an atmosphere of mysterious everyday dread without attaching concrete words to it. That she leaves up to us.

The movie’s premise — and possibly its finale — is spelled out in its title. Kate Lyn Sheil plays Amy, a young woman who’s just bought her first home. She’d like to think this is a positive step in her life, but we’re not sure: Through subtle gestures and random bits of context, Sheil fleshes out this troubled character. Amy is a recovering alcoholic. She’s a little listless. And, weirdly, she feels certain that she’ll die tomorrow. This is a shock to her friend Jane (Jane Adams), who has come over to talk her down. But after an initial panic, Amy doesn’t seem terribly alarmed — she likes the idea of her corpse maybe being turned into a leather jacket. In fact, she’s weirdly calm about the whole thing, which just freaks out Jane more.

You’d assume we’ll stay on Amy and her catastrophic vision, but instead Seimetz follows Jane back to her home. Suddenly, Jane is caught up in a similar thought pattern — she knows she’s going to die tomorrow. Anxious, she drives over in her pajamas to see her brother Jason (Chris Messina) and his wife Susan (Katie Aselton), who has friends over for her birthday. Jane interrupts the intimate dinner party to let them know she’s going to die tomorrow. Jason and Susan don’t know what to make of this — Jane can be a handful, after all — but soon the feeling overtakes them, too.

In 1997, Roger Ebert famously wrote about La Dolce Vita, the bittersweet 1960 film about an aspiring author who gets sucked into the vortex of Rome’s “sweet life,” losing his artistic ambitions in a haze of beautiful women and fabulous parties. In the piece, Ebert talked about his evolving relationship with the film over the decades — how his much younger self saw it as intoxicating, while the older (and now-sober) version saw the film as a cautionary tale of giving into one’s demons. “Movies do not change, but their viewers do,” he concluded, and it’s something I think about a lot. What we get out of films depends on where we are in our lives, but the best films keep speaking to us, informing our circumstance no matter what it might be.

In 2020, She Dies Tomorrow echoes the isolation and unceasing stasis we all feel. Amy and the other characters she comes in contact with, once they become aware that they’re dying tomorrow, seem to drop out of the normalcy of regular life. Everything stops, and they’re stuck with themselves, deciding what they’ll do with the time they have left. Do any of them have any actual proof that they’re dying tomorrow? No, but they believe so intently — and the movie’s quietly forbidding mood is so absorbing — that we take it as a given. Life as they knew it is over. Now, they’re residing in this weird other realm. “All the stupid things I used to talk about,” a character says, regretfully. “Stupid things to be interested in.” Suddenly, all the bustle of a life slips away. And there isn’t much left underneath. Because Seimetz (who previously made the low-budget, off-kilter thriller Sun Don’t Shine) never explains precisely what’s going on, She Dies Tomorrow has a Rorschach-test blankness to its execution. What you see tells you more about yourself than it does the film. You can view it as a metaphor for mental illness or depression. It could be a parable about surviving trauma — and the recent discovery that Seimetz filed a restraining order against her ex-boyfriend, citing mental, emotional and physical abuse, certainly adds pathos to that particular interpretation. Or, as Seimetz has herself said, She Dies Tomorrow is about anxiety. (In the press notes, she admits, “I was dealing with my own personal anxiety and found I was spreading my panic to other people by talking about it perhaps too excessively — while simultaneously watching a ton of news and watching mass anxiety spreading on the right and left politically.”)

The movie has the flexibility to encompass all those readings, but your own take on the material will be truest because of how it specifically hits you. It’s that rare movie that can be so thematically pliable. By not nailing down specifics, Seimetz invites us to fill in the blanks with our own nagging fears.

If that all makes She Dies Tomorrow sound dour, it’s probably worth pointing out that the movie is also incredibly, darkly funny. “All stories are about death to me,” Seimetz has said, and if you can understand why such a statement is inherently hysterical — not because it’s pompous but, rather, because it’s actually painfully, comically true — then you’ll understand the gallows humor at play in a film in which catastrophic gloom spreads from person to person like a plague.

She Dies Tomorrow is not an optimistic film that suggests we’ll achieve a more idealized version of ourselves as we meet the Great Unknown. Nope, we’ll be as small and self-absorbed as ever. Watch how the characters react to the news that their days are numbered. One couple decides to split up. (The woman had been putting it off but, hell, no point in waiting now.) A woman goes out in the desert. Others just go back to work. There’s no hugging, no learning in the face of such terrifying knowledge — again, if the end is actually even nigh. The film skillfully argues that we’re cursed to be ourselves until our last breath. It would be pretty depressing if it wasn’t so wryly accurate.

But that dark humor is just one color in She Dies Tomorrow, which is a rainbow of different sensations and feelings. Nobody acts entirely rationally in this movie — everybody behaves as if they’re sleepwalking or suffering from a concussion — which only further complicates one’s reading of this incredible little puzzle. The movie is like life, but not exactly a reproduction — it makes reality seem deeply bizarre in ways that we tend not to notice, unless we’re feeling a little paranoid or fatalistic. Of course, the pandemic has messed with our minds in a similar way, but She Dies Tomorrow, because it was created before COVID, reminds us that we had the capacity for such disconnection and alienation within us all along. Like the characters, the viewer gets the niceties of the everyday stripped away in She Dies Tomorrow. All that remains is the uneasy uncertainty we usually don’t want to face. 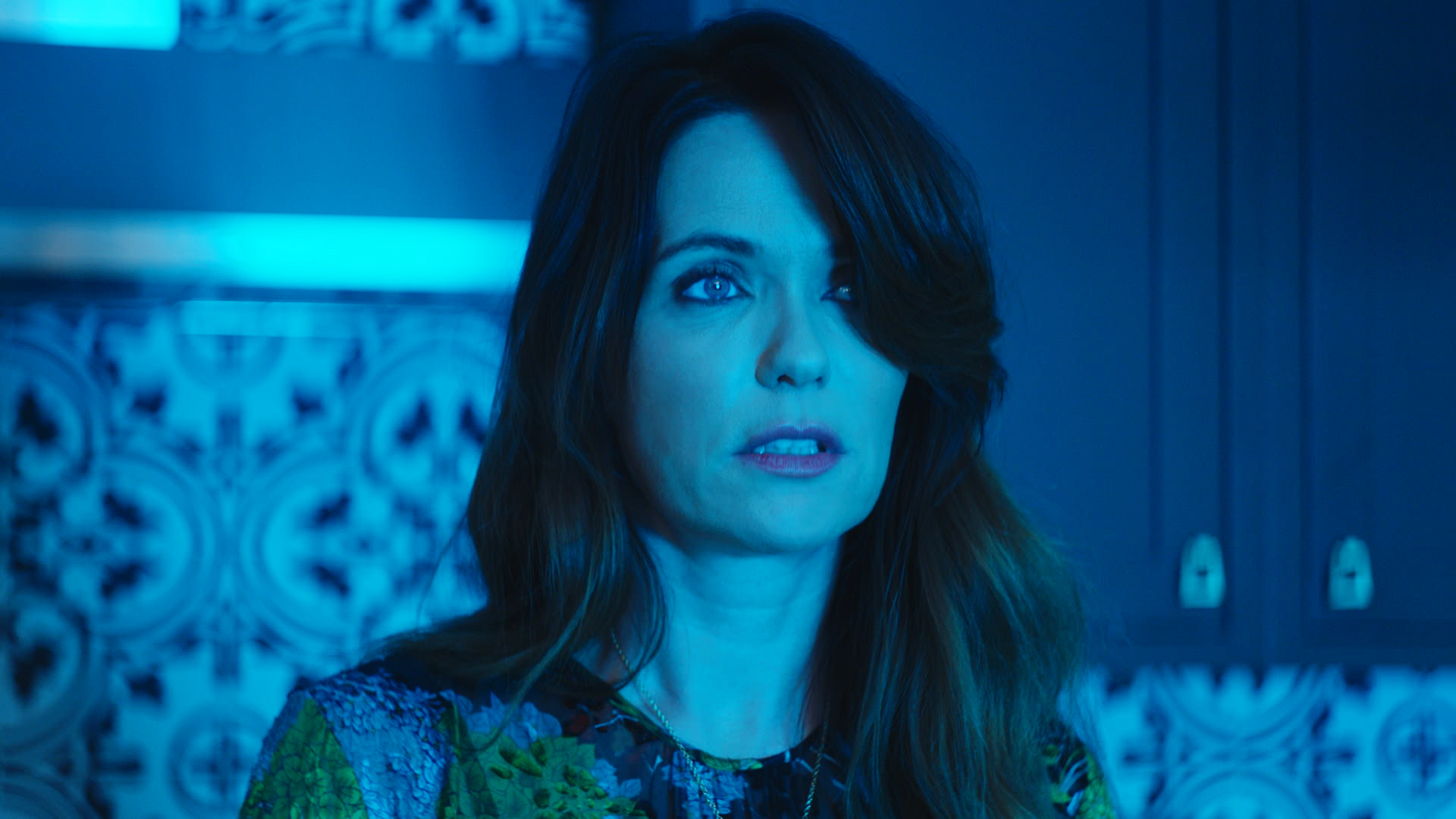 Someday, this pandemic is going to be over. Eventually, some semblance of “normal life” will come back. But, as I’m sure a lot of us are starting to recognize, “normal life” was always something of a construct — a security we held onto in order to keep the bad thoughts away. She Dies Tomorrow speaks eloquently to what happens when we allow that security to slip away. Seimetz has crafted a film that dips into the surreal and makes us confront the odd rush of losing our sense of ourselves.

I often think about that person at the initial screening who asked Seimetz how she was able to predict the pandemic. The brilliance of She Dies Tomorrow is that Seimetz didn’t. Instead, she understands all the mini-plagues that can spring up, ripping away the guardrails that make us feel like we’re not going to just tumble out into the cosmos, adrift and alone forever. The pandemic will eventually leave us. But that feeling will absolutely not. And She Dies Tomorrow will be here to remind us.