A devastating storm during a marital split almost destroyed my life. And then it put everything into perspective.

Every person has a lowest point: A moment in their life where, whatever the cause, it seems impossible that things could get any worse. These intensely personal experiences come in many different forms, but they all share one thing in common: The question of, how will I ever dig my way out? In this series, we’ll be talking to the people who somehow managed to pull themselves from the deepest depths and once again find steady ground. 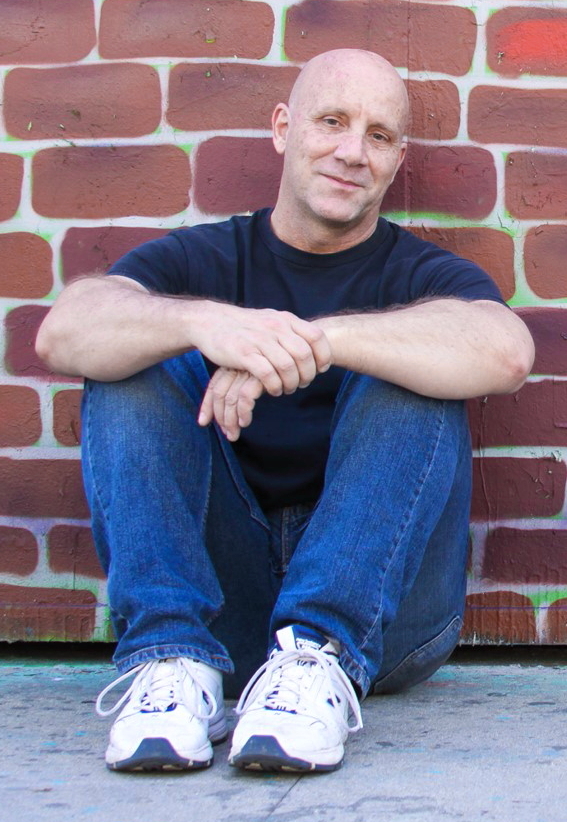 Name: Matthew Moran
Age: 53
Profession: Technology consultant, musician
Rock Bottom Moment: Losing everything in a flood at the same time as separating from his wife

My wife and I got married when we were young and had four children. Eventually we bought a home outside of Phoenix. It was a nice home — not new or anything, but it was in an area that we really liked.

My wife and I had been heading toward separation for a while. In 2007, she moved out. In Arizona, you get monsoon storms starting in July and into September. It’s a great experience; these storms really are amazing. Three days after my wife moved out, on July 31st, my son and I were going to deliver some things to my ex. As we left the house, I could see a storm coming. I could also see that it was gonna be a big one. On the road, I remember looking in the rearview mirror and saying, “Man, it looks like we’re being chased by hell.” The storm hit at 7 o’clock, so we stayed at my ex’s while it was really going. Then we headed back to our house around 9. 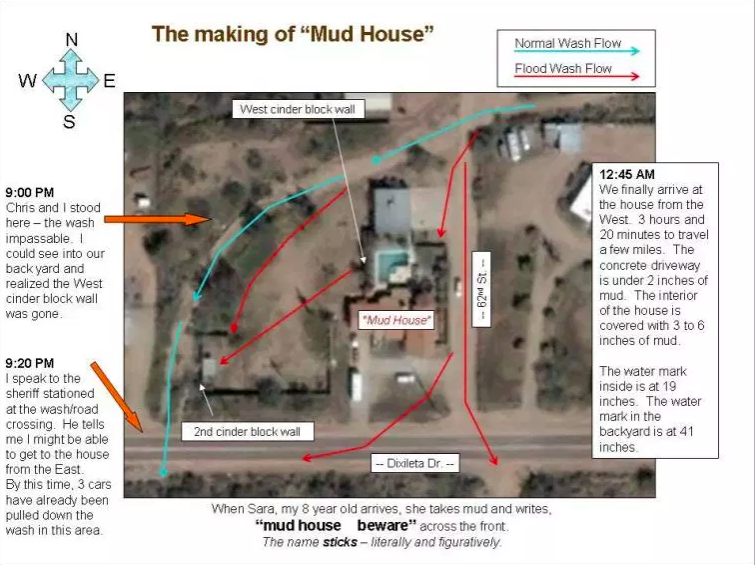 When we got to our neighborhood, it was like a war zone. I’d never seen anything like it. Two-foot rocks were in the middle of street, other parts of the street were washed out and we couldn’t get to our house, the water was just raging. Every road was shut down, and we were only able to get to our house at 1:30 in the morning. As I got to the front yard, I stepped onto our porch and it was covered with mud. When I opened the front door, water literally poured out right at our feet. Inside the house, there was mud and water about two and a half feet deep everywhere. My son must have thought I’d lost it because I started laughing. But I was just thinking, This is absurd. This happens in movies. It doesn’t happen to real people.

A couple weeks earlier, a plumber had come out to install a water-pressure regulator, and had inadvertently started a fire inside a wall. Firefighters put out the fire, and I’d boarded up the section of the wall they’d cut out. When the storm hit, mud and water from the wash behind our house came in through the back gate, filled the backyard with five feet of mud and water, then poured into the house through the AC returns, through windows and though this access point that was boarded up with plywood.

Inside, things were floating around: Guitars, computer equipment, everything. When the local news reporters came out the next day, the guy said, “You’re taking it really well,” and I said, “I don’t have any power over this. This is so outside the realm of what you think you could prepare for.” The funny thing is, when my wife and I separated, my oldest daughter was going to camp. When she left, she said, “Dad, we should just simplify and get rid of things.” So when I got ahold of her at camp to explain what happened, I started by saying, “Remember that conversation about simplifying and getting rid of things? It’s been taken care of.” 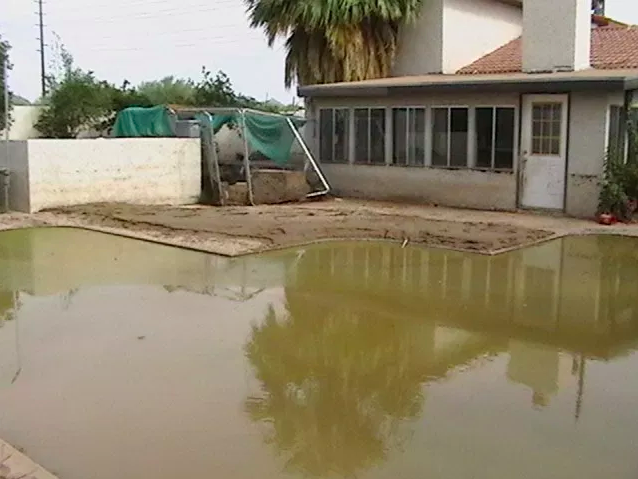 Given that the backdrop of all of this was really the ending of my marriage, to me, the flood wasn’t the big thing — it wasn’t the big loss at the time, if that makes sense. It was weird to lose everything, but I realized from the beginning of it that I have a close relationship with my kids, I have my health, I have talent and skills — this is just stuff. My recovery was more recovery from what happened with my marriage. I’d been with my wife from the time we were 17 and 18 — that was everything I knew, and the time of raising my kids felt idyllic. The flood occurred when they were older — my oldest was moving out of the house — so again, the feeling of loss was about losing the family. The synergy of a family in one place was much more significant to me.

We were watching the dog of my oldest son’s girlfriend’s family, who were out of town on vacation. So I had access to their house, this beautiful mansion, so we packed up and went there. I told them what had happened, and said, “If you wanna take a longer vacation, no problem! I’ll keep watching the house.” Soon after, the lady I was working for at the time, her boyfriend was in the midst of buying his ex-wife out of their house and offered to let us stay there. We moved in literally within a couple hours of his ex moving out. I didn’t even have a bed, but I’d gotten a twin mattress from my son, and we started cobbling things together. Invariably I just found people who wanted to get rid of things for pennies on the dollar, or I’d visit garage sales. 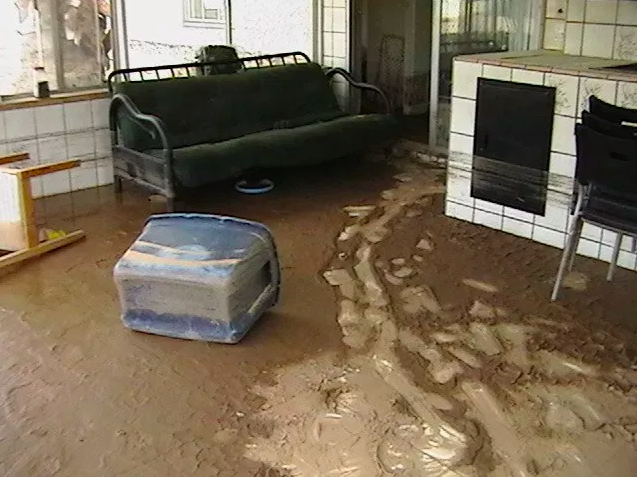 I went to FEMA for assistance on my house, but they came back and said there wasn’t a large enough geographic area impacted for them to provide assistance. I told them, “Maybe it’s not big enough for you, but it’s my whole world.” At the time, things were on a big decline, financially, for me. A few days after the flood, an insurance adjuster came out, but he said there’s no flood insurance — this wasn’t considered a flood plain. All we could do was walk away. It was seized by the bank and eventually torn down.

For the next year or so, I was really depressed. I wasn’t functioning professionally in any capacity. Things were sparse: Nothing was on the walls, and the house was devoid of feeling like a home. I was kind of checked out from my kids even though they were with me, and when I finally recognized it, I went to my 17-year-old daughter and said, “I think I’m depressed.”

She started crying and said, “Yeah, we know.”

Picking Up the Pieces

I have a pretty severe view of how I should have managed things, and should have been in better financial shape when everything happened. The way I view it is, if you’re not leveraged and you have more money put away, you have options. It doesn’t impact you as badly if you simplify your life. 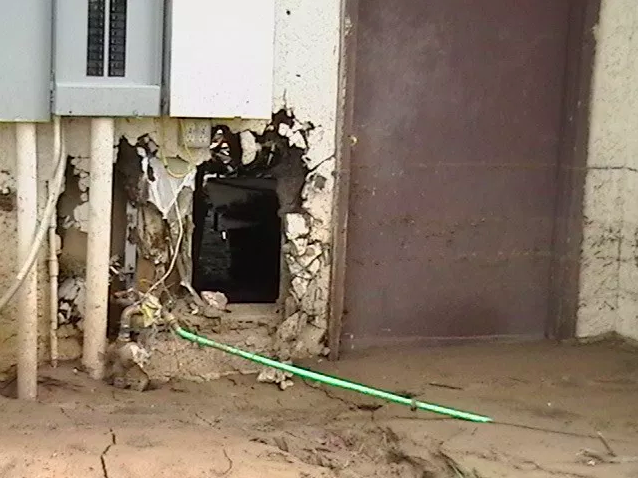 Eventually I moved back to California, where I’m from, into an apartment in Downtown L.A., so that my youngest daughter, who came to live with me full-time, could go to a performing arts school. I suggested to my girlfriend that there’s no reason we need to have a house in the suburbs and do things the way other people do them — we might travel to Europe and live overseas for six months, we’re not sure. We want to do something different. That might be part of what I pulled out of the flood: That you just don’t have guarantees with anything — and does that really matter? Are you doing things that keep your interest and fulfill you? I know that sounds new-age-y — I’m kind of a pragmatist, but that’s how I think about it.

It was weird to lose everything, but what’s even weirder is how it takes us no time to get more stuff. I discovered how easily I can get rid of stuff now — there are very few things I hold onto. A couple times a year I’ll purge my home of things I don’t need. Material trappings no longer matter to me — I didn’t have a TV for three or four years, and I don’t subscribe to cable. It’s about experiences now. The flood emphasized that what I value is driving up to visit my daughter in Oregon and climb and play music, see my son in Chicago and take in the architecture. Owning a home in L.A. doesn’t even make the list.

If anything felt like a loss at the time of the flood, it wasn’t the house. Maybe if things were good at the time, the way it impacted me would be different, but when you go through that family loss, what you value becomes much more realistic. So when I think about recovery, it has nothing to do with the flood — the flood was just an exclamation point during that moment.