How Trolls Forced the U.S. Military Off Twitch

An onslaught of ‘what’s your favorite u.s. w4r cr1me?’ comments sent it in full retreat

With the onset of the pandemic in March, an entire nation of restless young people were stranded at home, left cooped-up and understimulated, dreaming of the world that ought to be instead of the one that was.

America’s armed forces took note. No longer could they use high-school visits, tables at the mall and traditional recruitment offices to attract and interview young people and sell them on a life in the service. But it could modernize and tap into a captive audience, offering a path toward financial stability and a chance to travel. More than ever, it made sense to leverage video games on Twitch, a platform that flexes 143 million viewers, as a thrilling method of persuasion.

Not to mention, the U.S. Army, Navy and National Guard already all had servicemembers who moonlit as hardcore gamers. It made sense then to let them shoot baddies in Call of Duty and talk earnestly about the joys and challenges of military life on stream. “Twitch is just the modern incarnation of the shopping mall, as far as what they mean to a recruiter,” former recruiter and Army ranger Marty Skovlund Jr. told Wired. “These are shaping operations. It’s the same reason Coke places Coke bottles in movies. You aren’t literally going to buy a Coke because you just saw it in a movie, but it’s entering the consciousness. It’s a part of the recruiting process even if it’s not literally recruiting people.”

The stage was set for success — yet even the great minds operating military communications didn’t predict the chaos that would unfold over the summer of 2020. Maybe they should have predicted it, if they truly knew the degraded depths of Extremely Online® discourse. All it took was the provocation of activist and gamer Jordan Uhl, who joined a Twitch stream for the U.S. Navy on July 8th, then punched in a simple message: “what’s your favorite u.s. w4r cr1me?”

He followed it up with a link to the Wiki page on U.S. war crimes. Within seconds, he was banned.

Banned or not, it was the message that set off a thousand trolls. Over the next few weeks, thousands of people spammed Twitch streams with mentions of war crimes. Some 300 Twitch users were booted and banned for doing so. It wasn’t the first time people had flirted with this limit; even before Uhl, there was a game to see who could get kicked from the U.S. Army’s Discord chat the quickest, complete with competing “speedruns.” But Uhl’s ban, the viral clip of it happening and his op-ed in The Nation collectively served as kerosene on the cultural campfire.

As it so happens, if you’re a government entity, you can’t just ban people for saying stuff you don’t want to hear — it’s the same law that stopped Donald Trump’s Twitter account from banning people. Uhl, along with the others who were banned on Twitch, threatened a First Amendment lawsuit supported by Columbia University. The Army and Navy subsequently went on Twitch hiatus.

Since then, the comeback hasn’t been smooth. Both branches agreed to stop banning people from streams for prodding them about war crimes, and the Navy even created a manual for streaming guidelines (“While difficult, the best approach is to simply ignore disrepute individuals. Situation will escalate if you engage with someone who is there only to disrupt. Control your reaction and convey a sense of Navy calm.”) But the flood of comments about war crimes didn’t seem to wane. Then, as if the cosmos smelled karmic weakness, it struck both the Navy and National Guard with embarrassments involving racist language and a Nazi meme. Just like that, both services were done with Twitch streams.

The future of the military’s great Twitch experiment remains uncertain, and only the U.S. Army is forging ahead with public streams that intend to, as a passive goal, recruit interest. The number of opponents has grown with all the negative press; Rep. Alexandra Ocasio-Cortez proposed a measure to ban the Pentagon from Twitch recruiting, which failed after garnering backing from 100 other members of Congress. (The old-school Marines might have called it best — they avoided the whole Twitch fracas because Corps brass had “concerns over gamifying what we do.”)

Even without a ban, however, it’s sensible to wonder how on Earth you can recruit anyone when the chat box is clattering with mentions of rape, torture and imperialist sins. Here’s a screenshot from a U.S. Army stream from a week ago: 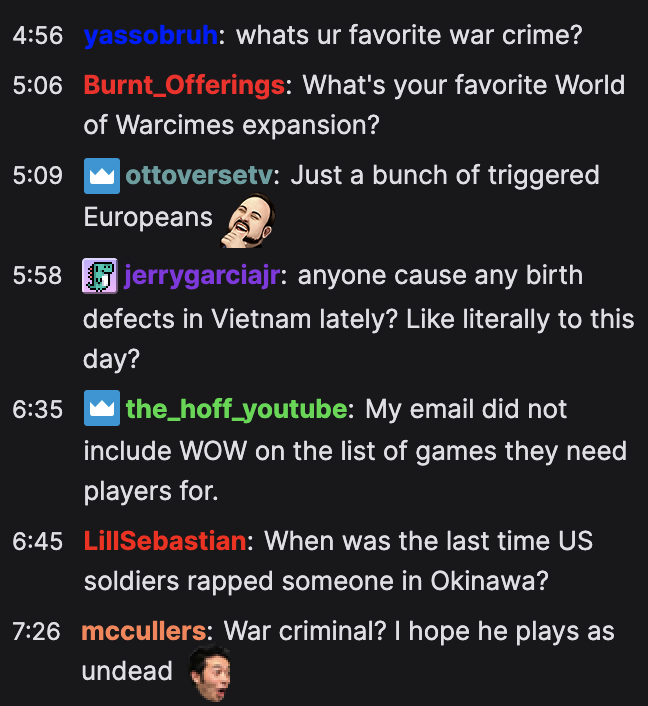 Not exactly original material, but it’s also not exactly fertile territory for winning hearts and minds. At the end of the day, Twitch might not be the battle worth winning, anyway; through a reduction in recruiter numbers and a focus on digital outreach on forums and social media, the military has hit its enrollment goals despite initial challenges signing recruits at the onset of the pandemic. That successful model will likely remain even after the pandemic wanes, because it turns out that young people are easier to talk to via DM than at a table in a high school.

The rise and fall of the military’s attempt to recruit on Twitch is a case study in 2020 online discourse, and one that will continue to fruit as online leftists clash with institutions that want a piece of the digital influence pie. The next online battlefield, whatever it is — perhaps the DMs of teens — looms ahead.