At long last, though, a nationwide rebellion is brewing — along with better drinks

Along with the TV commercial for Cats on Broadway and the one for mail-order CD compilation Pure Moods, another ad from childhood lingers. Initially airing in 1993, it was the first spot in the “Got Milk?” campaign, which would run nationally for another two decades. The premise is this: An evident history buff, sitting in a room full of Alexander Hamilton memorabilia, takes a big bite of a peanut butter sandwich right as a radio DJ announces a contest — the first person he calls who names the man who shot Hamilton “in that famous duel” wins $10,000. (Needless to say, this was long before anyone had heard of Lin-Manuel Miranda.) The phone rings, and our guy answers confidently, but his mouth is all glued up, his voice unintelligible.

If only he’d had some milk!

I recall being somewhat confused that, although most commercials sold specific, branded products, there existed this odd genre of ad promoting a general commodity. Turns out I was right to be suspicious: The “Got Milk?” phenomenon was a government-aided push to reverse the plummeting rate of fluid milk consumption in the U.S. The $38 billion dairy industry has worked with political forces to overhype milk’s nutritious value for nearly a century now, and federal guidelines for a 2,000-calorie diet still include the equivalent of three cups of dairy per day — this despite evidence that calcium may be less beneficial than promised, the lactose intolerance of some 30 to 50 million Americans and a range of health risks associated with the food group. Lately, the Trump administration has joined forces with the dairy lobby — which spends millions on influence in Washington — to get fattier milks back into school cafeterias.

Naturally, all this pressure to be resolutely pro-milk has trickled down into the family unit:

Little wonder, then, that people have been sounding the alarm about milk conspiracies and corruption for longer than I’ve been alive. If you’re still not convinced, think about this: That Aaron Burr milk ad was directed by none other than Michael Bay, who was given the opportunity to direct his feature debut, Bad Boys, shortly afterward. A gesture of thanks from the all-powerful dairy farmer cabal, no doubt.

Even more chilling: Of the 29 states that have an “official beverage,” 21 went with milk — and 13 of those made that selection in the 1980s. The other eight named milk their official beverage while the “Got Milk?” campaign was active. It’s hard to escape the impression that most, if not all, were strong-armed into this propaganda. Prior to the dairy mafia’s efforts, three states had picked drinks far more reflective of their character: tomato juice in Ohio, cranberry juice in Massachusetts and orange juice in Florida.

When you start prying into the legislation behind milk’s national takeover, things get even more transparently cynical. Take South Carolina, which snuck milk in as their official beverage with a 1984 bill that designated a trio of state symbols. Lawmakers picked the peach as their fruit, noting that South Carolina was the “leading peach producer and shipper east of the Mississippi River” and on track to “produce more fresh peaches than any other state in the nation” in 1985. They also named the Lettered Olive the state’s official shell, as it is “quite prolific along the South Carolina coast” and had been “found and named by a South Carolinian, Dr. Edmund Ravenel of Charleston, who was an early pioneer in conchology.”

Conveniently sandwiched between these two well-considered proposals were a couple of anemic arguments for milk as the most South Carolinian of beverages, and they sound like generic info straight from the dairy lobby. In fact, the first three lines don’t mention South Carolina at all. Pretty suspicious, no? 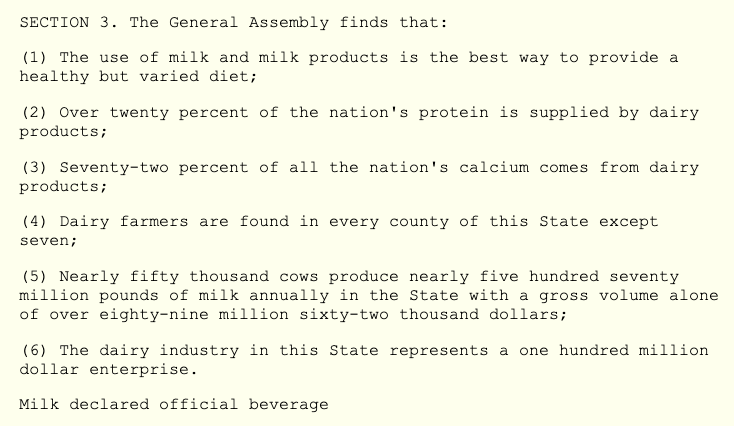 Milk’s white-knuckled grip on S.C. hasn’t weakened, either. In 1995, when the state wanted to recognize their tea — when served over ice, an inarguably superior beverage for the humid, sweltering climate — they had every reason to do so. It was the first state where tea was grown, and the region “contains a unique combination of factors that makes tea production possible.” Yet, with milk already occupying official state beverage status, the legislation had to awkwardly name homegrown tea as the “official hospitality beverage.”

What’s a hospitality beverage, you ask? Probably some bullshit made up to placate milk’s terrifying power brokers. Clearly, they will never allow their product to be unseated from its throne of total domination.

The people, however, are starting to reject milk, and nowhere more forcefully than in Kentucky. In 2017, thousands of Kentuckians were enraged to learn that a state senator (who just so happened to own a dairy farm) had successfully floated a bill naming milk the state’s official beverage. Being the place where bourbon was born, and producer of 95 percent of bourbon in the world, any other choice of drink would be an insult — milk especially so. “Milk is boring, bland and contributes next to nothing to Kentucky’s image or economy,” raged the author of a Change.org petition, some brave soul I can only surmise was quickly assassinated by dairy special forces, as Kentucky has yet to abandon milk for its far more appropriate and potable symbol of pride.

The good news is that milk’s intimidation tactics appear to have diminished in the long term. No state has adopted it as their beverage since 2009, while a couple have broken free of its hegemony. New Hampshire went with apple cider in 2010, as requested by some fourth-graders, and just this year, Arizona chose lemonade, the perfect refreshment in a desert heat, at the suggestion of a random teenager — though the measure had to overcome a bit of resistance, including a senator who advocated for margaritas instead. Still, thank god the next generation isn’t growing up under the thumb of Big Milk. If anything, they’re paying attention to the neo-Nazis chugging the stuff and the West Virginia politicians who appeared to vomit after drinking the raw kind.

Finally, from sea to shining sea, we have a suitable answer to the question “Got Milk?”