Ranking Types of Wine by How Healthy They Are

Merlot? Cabernet Sauvignon? Chardonnay? Which can a Karen drink the most of without mutating into a Super Karen?

If you ever needed a reason to get incoherently wine drunk, the president of the United States is using his platform to advertise beans while a savage pandemic culls his population. Bottoms up!

But while the importance of consuming enough wine to remain artificially optimistic during these dystopian times cannot be understated, neither can the significance of staying healthy enough to live through them. For the best of both worlds, simply opt for healthier wines. To help you make those choices, I asked nutritionist David Friedman, author of Food Sanity: How to Eat in a World of Fads and Fiction, to assist me in ranking types of wine by how healthy they are — from surprisingly healthy to hangover juice.

Like eggs, wine is questionably healthy. One day, a study says wine is good. The next, a study says wine is bad. Generally speaking, Friedman is of the opinion that wine has the potential to be healthy in moderation. “Having a glass of wine each day has even been recommended by the Academy of Nutrition and Dietetics,” he points out. “Red wine is higher in phytochemicals (chemical compounds from plants), including resveratrol and quercetin. These powerful antioxidants have been linked to health benefits including arthritis relief, heart disease protection and longevity.”

Drinking too much wine, however, has been linked to causing heart disease, liver failure and even cancer. “The recommended daily serving of red wine is four to five ounces,” Friedman says. “A full bottle of red wine should last a solo drinker five nights.” I’m going to pretend I never heard that last bit.

You probably already noticed that Friedman is focusing primarily on red wine, and for good reason. “White wine isn’t as healthy and has recently been linked to causing skin inflammation issues, like rosacea, and a higher incidence of skin cancer,” he explains. Whether these links are genuine or not, red wine also tends to be generally more nutritious than white wine.

Now let’s get into our ranking. 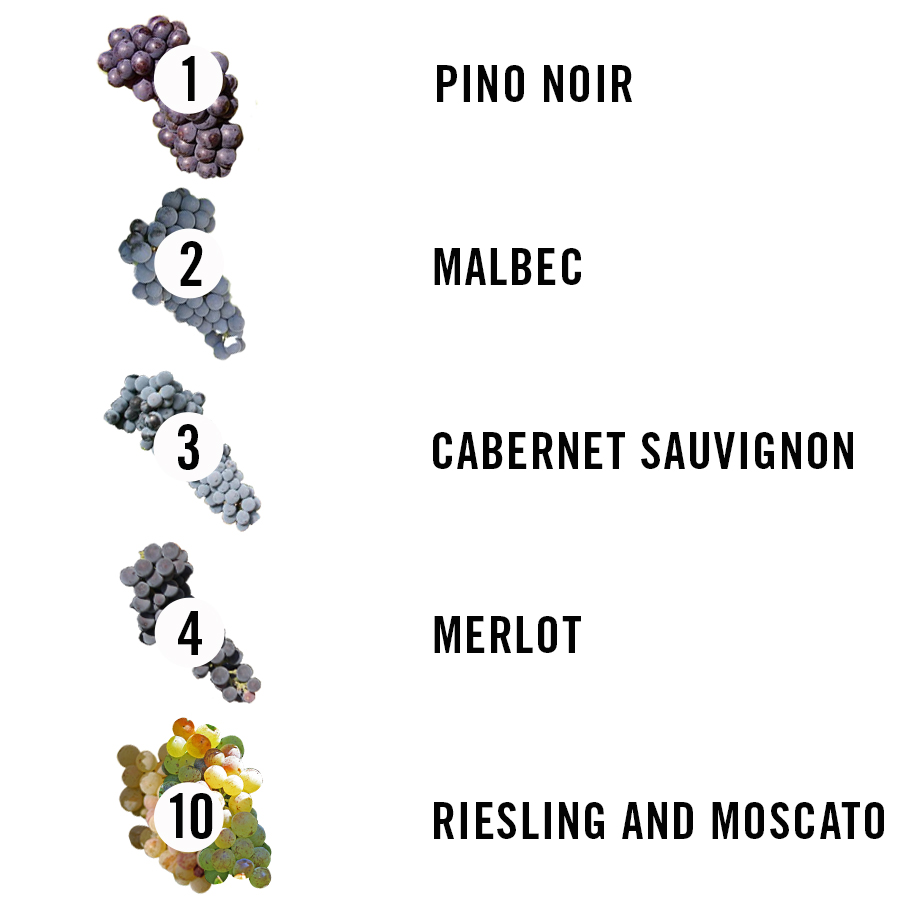 1) Pinot Noir: “This is by far the healthiest red wine and my top pick,” Friedman says. “Pinot Noir has a higher resveratrol concentration than any other red wine. Resveratrol is an antioxidant compound that has been shown to improve heart health by lowering bad cholesterol and high blood pressure. Some studies have also suggested it can improve brain health, insulin sensitivity and increase our lifespan.” Additionally, research also suggests that resveratrol slays cancer cells and bolsters heart health, hence the reason why red wine is commonly believed to reduce heart problems.

As an added bonus, Friedman says, “Pinot Noir has a lower sugar content and fewer calories than other red wines.”

2) Malbec: “Malbec grapes have some of the thickest skins of all wine-grape varieties,” Friedman explains. “This means they’re loaded with resveratrol, quercetin and other antioxidants that are beneficial to cardiovascular and immune health. Malbec wine contains four times the antioxidant content as popular Merlots, and nearly twice as much as Cabernet Sauvignon.”

“Malbec wine is also high in polyphenols, which act as powerful antioxidants,” Friedman continues. “They’ve been shown to help prevent cellular damage from free radicals that occur from pollution, smoking and byproducts of normal metabolism. Polyphenols also have an anti-inflammatory effect on the body, which can help lower the risk of several chronic diseases.”

3) Cabernet Sauvignon: “While red wine is known for causing stained teeth, Cabernet Sauvignon actually contains a chemical that kills certain strains of cavity-causing bacteria and protects damage to tooth enamel,” Friedman explains. “This wine choice offers an excellent source of proanthocyanidins, which are potent antioxidants that have been shown to reduce oxidative damage in the body.” Furthermore, Cabernet Sauvignon contains catechin and epicatechin, plant compounds that protect against the flu and other infections (whether that includes the coronavirus remains uncertain).

In moderate, not-entirely-debilitating amounts, Friedman adds, “Cabernet Sauvignon reduces the levels of amyloid-beta peptides in the brain, which may improve cognitive brain function. So for college students wanting to unwind after a long day of classes, this wine is the ‘smartest’ choice for you.”

4) Merlot: In addition to containing a decent dose of resveratrol, Friedman says, “Phenolics found in Merlot may prevent the formation of bad cholesterol in the blood, which is one of the causes of atherosclerosis, or plaquing of the arteries. Merlot wine also improves the bacterial lining in the large intestine, which enhances healthy gut benefits. A Spanish study suggests that sipping nine ounces of Merlot changes the mix of good and bad bacteria found in the colon in ways that can benefit your health.”

If you have trouble sleeping, Friedman also suggests that a glass of Merlot could help. “Merlot grapes contain melatonin, which can help relax the mind and induce sleep,” he says. Keep it to one glass, though, or else you may end up having even more trouble sleeping.

6) Rosé: Rosé is made from both red and white grapes, and while it still boasts antioxidants and polyphenols, it contains less than your straight-up red wines. “Rosé is healthier than white wine thanks to its heart-healthy resveratrol content, but it’s not as much as you get from drinking red wine,” Friedman explains.

Rosé is, however, low in calories, if you care about that kind of thing. “A five-ounce glass of Rosé wine contains only 80 calories, making it one of the lowest-calorie alcoholic drink choices available,” Friedman says.

7) Pinot Grigio: This is our first dedicated white wine, and it correspondingly has less health benefits than red wine. “Unlike red wine, which is fermented with the skins, resulting in a high level of antioxidants, Pinot Grigio winemakers strain the skins, which means less flavonoids, resveratrol and other beneficial micronutrients,” Friedman explains. “However, white wine does have some health benefits over red wine: Research from the University of Buffalo suggests that drinking Pinot Grigio can help improve lung function better than drinking red wine. Also, Pinot Grigio contains the compounds tyrosol and caffeic acid, which act as anti-inflammatories and antioxidants.”

8) Chardonnay: Another white wine, Chardonnay may improve your cholesterol levels, Friedman says. “In one small study involving 146 participants with mild to moderate risk of cardiovascular disease who were followed for a year, those who exercised at least two times per week and drank Chardonnay saw an improvement in their LDL cholesterol levels,” he explains. “But we have to also consider that exercising can have been a contributing factor to lowering cholesterol levels.” Which, yeah, exercising is good.

9) Sauvignon Blanc: Yet another white wine, Sauvignon Blanc could do good for your brain (unless you drink like, 20 bottles in quick succession, of course). “Some researchers have shown that the unique antioxidants specific to Sauvignon Blanc may offer protection against cognitive decline,” Friedman says. “For instance, in a study published in the Journal of Nutritional Biochemistry, researchers extracted polyphenols from white wine and fed them to mice for two months to determine the impact of a white-wine-enriched diet on the brain for Alzheimer’s-disease-like pathology. At the end of the trial, these mice had lower risk of developing cognitive problems leading to Alzheimer’s disease.” (Side note: Let me know if you find any mice running around that look like this.)

10) Riesling and Moscato (tied): Both of these are sweet white wines, often served with dessert. “Neither of these two wine options offer much in antioxidant and nutritional value, but they do pair nicely with sweet dessert-style dishes and fruits, such as chocolate, cheesecake and strawberries,” Friedman says. “Riesling and Moscato contain a very high amount of residual sugar, which in turn is broken down into fat and can also lead to a more severe hangover.”

It’s settled then: Tonight, I’ll be indulging in a fine Pinot Noir as I catch up on the next phase of the earth’s slow but certain death.