Ranking Lemonades by How (Un)Healthy They Are

Which one has less than a dumpster full of sugar, and strips the least amount of enamel off your teeth?

Lemonade: it’s refreshing as hell on a hot day. We buy it off of entrepreneurial kids trying to make a buck. It’s got that platonically ideal combination of sweet, sour and chilled. It’s the stuff of barbecues, family reunions and a well-earned glass of a post-lawn-mowing Arnold Palmer. It’s basically the unofficial drink of summer, right? Lemonade is so good that it’s become the ultimate parable of making something bad into something good (you know, that cliché about lemons). Nobody ever said that about orangeade!

Trouble is, there’s no such thing as a “healthiest” lemonade, since it takes copious amounts of sugar to balance out the acidity of the lemons. And according to dentists, the acidic content of lemons themselves can penetrate and erode your tooth enamel (which doesn’t exactly complement all that aforementioned sugar). So “healthy” is all relative. But since it’s so good, and because there are so many, many different kinds of lemonade out there — frozen, fountain, bottled, homemade, alcoholic — we ranked them in order from healthiest lemonade (relatively speaking) to least healthy, with the help of Dana Hunnes, senior dietitian at the Ronald Reagan UCLA Medical Center.

So, before all our teeth fall out, let’s begin. 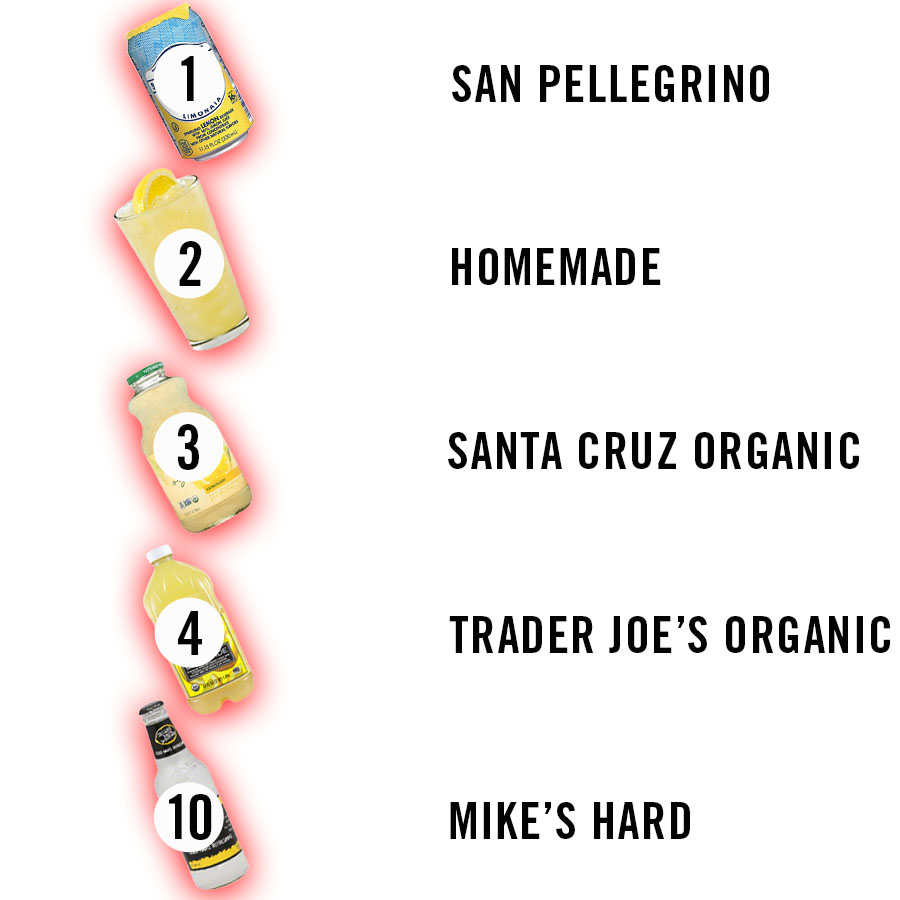 1) San Pellegrino Limonata and homemade lemonade (tied). When it comes to San Pellegrino’s delicious cans of flavored sod— whoops, I mean, “Limonata,” Hunnes says, “Of the non-homemade lemonades, this is probably the ‘healthiest,’ although it still has far too much sugar than is necessary in my book. I say this is the healthiest because it has the least amount of calories for the portion size: about 10 calories per ounce, which isn’t so bad. However, 120 calories for a beverage is just like soda, and a bit much in my book owing all to the sugar. At least it doesn’t have any colorings or flavorings in it.”

Same goes for homemade lemonade — we used this popular recipe on the tubes as an example. “[It’s got] simple ingredients, and the best part is you can make it as sweet or not as you like it. So it definitely has the potential to be much healthier than anything else on this list,” Hunnes says. “I’d certainly go light on the sugar to start. You can always add more, but it’s impossible to take it out.” She also adds that you could sweeten it with Stevia or monk fruit sweetener instead — if you find those things palatable (Hunnes personally isn’t a fan of the taste of Stevia).

2) Santa Cruz Organic Lemonade. This is the kind of upscale stuff you can find at a joint like Whole Foods. But is it actually much better than the cheaper lemonade swill? Hunnes thinks so — sort of. “Of the lemonades that are prepared, this one at least has less sugar than many of the others, and at least the ingredients are pretty clean,” she says. “Still, it has too much sugar and I’d recommend diluting it, but at 11 calories per ounce, it’s not the worst.”

3) Trader Joe’s Organic Lemonade. Can’t ignore Trader Joe’s here, with its private-label version of every food and beverage known to humankind. How’s their lemonade? “Aside from the fact that each ounce has 15 calories and far too much sugar, the ingredient list is at least clean — other than sugar being one of the first ingredients,” Hunnes says. “I’d either stick to making your own or dilute this with some more water or sparkling water.”

4) Sunkist Lemonade. This bottled drink is the stuff of vending machines and convenience stores all across the land. So how bad is it? “This is basically soda, even down to the high-fructose corn syrup,” Hunnes explains. “Too much sugar for sure to be remotely healthy, and it also has added colorings in it, which may be deleterious to health.” Whoops.

5) Minute Maid Lemonade Frozen Concentrate and Minute Maid Fountain Lemonade (tied). Things are starting to get bad in a hurry, the farther down this list we go. Let’s start with the can of frozen concentrate that you have to stir, pound, chop and destroy in a pitcher full of water until it decides to become lemonade. “I’m not sure why this needs to have high-fructose corn syrup in it, but nonetheless, it does,” Hunnes says. “The worst part about high-fructose corn syrup is that it is lipogenic, meaning it increases the likelihood that you will produce more fat in your body after drinking it, particularly in large doses. Sadly, high-fructose corn syrup is the first ingredient, meaning it has the most of that. Again, far too much sugar.”

The fountain version — that staple of fast-food restaurants and pizza joints — is pretty much the same story, just with less effort required on your part. “Still far too much sugar for my taste,” Hunnes says (pun unintended, presumably). “Eight ounces has 100 calories: 12.5 calories per ounce. That is a lot, and again, it comes from high-fructose corn syrup, which we need less of, not more.”

6) Mike’s Hard Lemonade. We might’ve been hoping for a surprise with this left-field pick, but coming in last is really no surprise at all. Take it away, Dr. Hunnes!

“This is like drinking a beer in terms of alcohol content, but with the added sugar of lemonade. I’d liken this to a mixed drink,” she says. “At 230 calories per bottle, it’s roughly 20 calories per ounce. I’d say if you want a beer, have a beer, if you want lemonade, have lemonade, but don’t necessarily try to combine the two unless you don’t mind having all the calories that go with it. It’s certainly got some of the most of everything listed here.”

So, if you’re thirsty and it’s summer or a special occasion, knock yourself out, man. Enjoy your lemonade. Might wanna add exercising and brushing your teeth to your calendar for the next day, though, because if it tastes good, you can bet it’s got a whole lot of fattening, tooth-rotting sugar and a bit of tooth-enamel-melting acid to boot.