The former home run king taught me early on that America doesn’t celebrate all its heroes, preferring to erase or mythologize its past instead

As a boy, my pop often told me the story of when his childhood friend, Al Downing, threw the baseball that Hank Aaron smacked into the Georgia night to break Babe Ruth’s career home run record. My parents were at the ballpark that night in April 1974. Downing had given them tickets.

For my part, I taped a black-and-white photo of that moment to the wall of my childhood bedroom. There he was — Hank Aaron, his bat swung past his shoulders, his eyes up, watching the ball he’d just hit, as it soared high into the sky. It was the moment when he realized it was all over; he’d done it, he’d toppled the Babe.

America would never be the same.

As someone raised in Atlanta, I viewed Aaron like I viewed MLK. Both men were legends to me. But also very real — and local. Sadly, though, Aaron also taught me early on that America doesn’t celebrate all its heroes. He showed me how America prefers to erase its past, which is why it’s so important to know the truth, not just celebrate the myths and legends.

To that end, the truth of Aaron’s life is far more powerful than any legend. He suffered like hell for us — especially for us Black boys and girls. “I’m not trying to think that I had some good times, because there were no good times there at all,” he once said.

“April 8, 1974, really led up to turning me off on baseball,” he later expounded. “It really made me see for the first time a clear picture of what this country is about. My kids had to live like they were in prison because of kidnap threats, and I had to live like a pig in a slaughter camp. I had to duck. I had to go out the back door of the ballparks. I had to have a police escort with me all the time. I was getting threatening letters every single day. All of these things have put a bad taste in my mouth, and it won’t go away. They carved a piece of my heart away.”

The death threats were so numerous and intense, in fact, that the Atlanta newspaper quietly prepared an obituary for Aaron, just in case he was assassinated. One such threat: “Retire or die! The Atlanta Braves will be moving around the country and I’ll move with them… You will die in one of those games. I’ll shoot you in one of them. Will I sneak a rifle into the upper deck or a .45 in the bleachers? I don’t know yet. But you know you will die unless you retire!” 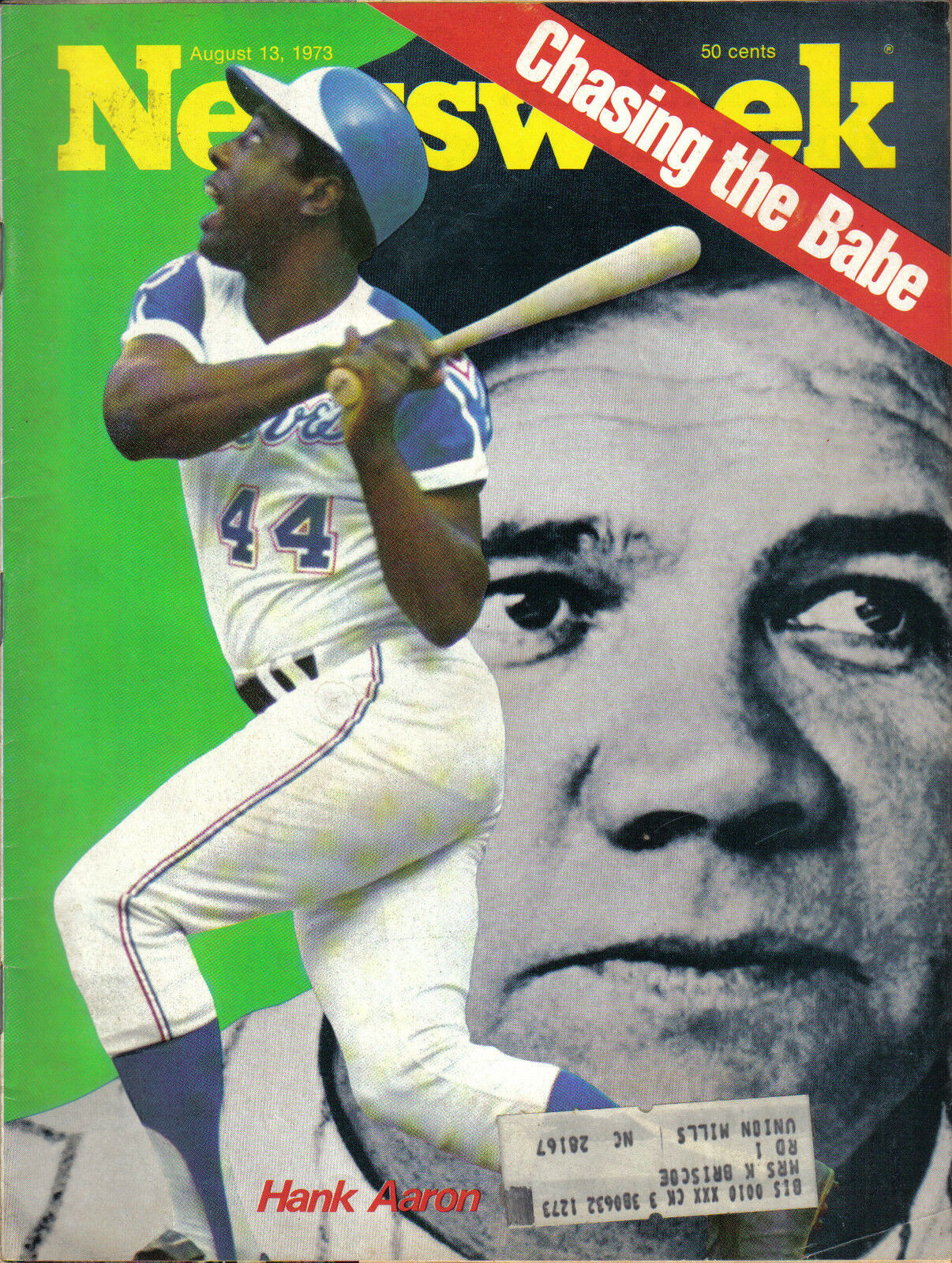 When Mark McGwire broke a similarly beloved home run record in 1998 (the most homers in a season, a mark previously held by Roger Maris), Aaron was asked about the moment. He responded wistfully, “You know, as I watched, I was really excited for the fans, for baseball and for McGwire. And I said to myself, if just a little bit of that had happened for me, how glorifying that would have been. It’s too bad my kids couldn’t have enjoyed it like that.” (Because of all the death threats, he had to live separately from his children the two years prior to breaking the record.)

The sportswriters of his era were no kinder to Aaron. They dismissed him as a “natural talent” — code for “he’s just a dumb Alabama boy” (heavy emphasis on “boy”) — and often used outright racist nicknames like Stepin Fetchit when referring to him. In particular, there was one anecdote they loved to repeat. It became central to their version of Aaron. The Milwaukee Braves were in the World Series against the Yankees, when highly quotable, beloved idiot catcher Yogi Berra said from behind the plate, “Hey, Hank, you holding the label on the bat wrong.” Aaron reportedly replied, “I didn’t come up here to read.” The implication being that Aaron was even dumber than the dumbest man in sports.

In fairness, Aaron’s fellow players always recognized his greatness. They praised him for his thick and quick wrists, the secret to his power hitting. They frequently compared him to Joe DiMaggio, with Mickey Mantle saying, “As far as I’m concerned, Aaron is the best ballplayer of my era. He is to baseball of the last 15 years what Joe DiMaggio was before him. He’s never received the credit he’s due.”

But mostly, when the press drew comparisons between Aaron and DiMaggio, it was only to disparage Aaron further. “DiMaggio’s aloofness, abruptness, curtness, rudeness — it was seen as some kind of princely grace,” David Kindred from The Sporting News recalled to ESPN. “Whereas in a Black man, it’s seen as some kind of mean-spirited bitterness. DiMaggio was made into a saint, while Aaron was made into a devil.”

There was one man, though, who knew what Aaron had gone through in his long career — Muhammad Ali. A proud man who intimately experienced how soul-crushing it could feel to be a Black superstar in America who challenged white supremacy, Ali called Aaron, “The only man I idolize more than myself.”

Still, when Aaron broke Ruth’s record, Bowie Kuhn, the commissioner of baseball, wasn’t in Atlanta for the game. Instead, he was having dinner in Cleveland, with no plans of honoring Aaron’s accomplishment. In fact, it would take Major League Baseball a quarter century before it would properly celebrate Aaron.

In 1999, on the 25th anniversary of Aaron’s feat, MLB dedicated the season to Aaron. It was an honor the league bestowed only once before — to Jackie Robinson. A new award was created and named for Aaron as well. It was to honor the season’s best hitter in each league, the equivalent to how the Cy Young Award honors the best pitcher. It was finally a small measure of recognition of all that he’d accomplished for the sport. Andrew Young, the former mayor of Atlanta, said at the time, in a vast understatement, “Recognizing Hank Aaron is something baseball needed. And I think that the way that people have turned out in the parks, around the country, in his honor, was their way of saying, that maybe we didn’t understand what you were going through.”

As time passed, Aaron was afforded many more honors (the Presidential Medal of Freedom chief among them). Along the way, Aaron was able to let some of the hurt go. He even began to understand the anger of the men who’d once slandered him in the sports pages — not that he owed them that, but it at least freed him from their hate. “Many of the writers in those old cities like New York and Cleveland and Chicago were old enough to have actually seen Babe Ruth play,” he said with an admirable generosity in 1999. “I think that when you took Babe Ruth away from them, you were taking away part of their own history. If they gave up Ruth, they gave up part of themselves.”

All of which is an important reminder that hate is just fear in disguise.

Toward the end of his life, Aaron joined Twitter. He didn’t tweet often. Just a handful of times, really. In the eighth tweet he ever sent, Aaron reached out to NFL defensive back Richard Sherman, an outspoken player who’d been labeled a “thug” by sportswriters, despite the fact that Sherman had attended Stanford and was better educated than most of his critics. Two years prior to Colin Kaepernick taking a knee, Sherman caught hell from the press for trash-talking comments he’d made to a fellow player (with the dog whistles “immature” and “classless” ringing clamorously from their copy). Aaron wanted Sherman to know he understood what he was going through — and that he had his back.

Aaron’s father, Herbert, perhaps best summed up his son’s effect on the world. Herbert Aaron was illiterate. He’d been a one-time sharecropper in Alabama. He knew exactly how far his son had come and what all he’d accomplished. On the night of April 8, 1974, just after Aaron became the new home run king, a reporter caught up to Herbert and asked the proud father, “Now there will be fans who will be pulling for someone to break Hank’s record. How do you think he will deal with that?”

In a very Southern way, Herbert paused, and then proceeded to tell the reporter a story about a fox. “The fox had been running from the dogs all night, and finally, as he ran to the top of the hill and realized he couldn’t get away, he saw the sun coming up,” Herbert explained. “And when he saw that sun, he just sat down. He looked at the blazing dawn, and he said, ‘I don’t care if they do catch me now, ‘cause I done set the world on fire!’”

That was Henry Aaron. He set the world on fire. And we were all made better by the light. Black boys and girls like me most of all.