All that glitters is not gold. This is what happens long after the bomb goes off, the viral video ends and the scorned lovers are blasted to twinkly hell

For a few weeks of 33-year-old Sean’s life, there was a piece of glitter stuck to his face that wouldn’t come off. Protected by a mixture of facial hair and divine misfortune, it clung to the arch of his right eyebrow, catching the sunlight with a flamboyant wink every time he turned his head.

“You’ve got glitter on your face,” said nearly everyone he saw.

“I know,” he’d reply, forlorn and frustrated. “My house is covered in it.”

A few weeks earlier, his girlfriend of nine months snooped through his phone and caught him sexting with someone else. To get even, she’d loaded his ceiling fan with silver glitter, hoping that when he turned it on, it would flutter down like acid rain and ruin his bedroom like he’d ruined their relationship.

Her plan worked beautifully. Frozen with panic, Sean watched as specks of silver settled into his bedding, carpet and clothes; the room was now blanketed in an adorable shimmer that looked both “cute” and “terrifying.” Sweeping and vacuuming only seemed to distribute the glitter around his house; the more he tried to clean it up, the more places it would appear. Two years later, he still finds specks of sparkle in his room.

As Sean found out, glitter revenge stunts have become increasingly popular lately, with videos of the deed going viral everywhere from YouTube to TikTok. Countless prank websites sell their own proprietary glitter bombs too, some of which have become so sought-after that their founders have begged customers to stop placing orders. Dick at Your Door sells a spring-loaded one that shoots out penis-shaped sparkles; Glitter Bomb Your Enemies offers an optional “bag of dicks” to go with your order; and the Unicorn Glitter Bomb comes with an envelope full of glitter and a strongly worded letter suggesting its recipient “make an effort at being a better person.”

Glitter didn’t start out this vindictive. Invented in 1934 in New Jersey when a German immigrant invented a machine that hacked scrap metal and plastic into incredibly small pieces, it soon became the preferential option for windowsill sparkle after candles were banned by the Army during World War II. Why people started putting it on their eyelids, covering their Christmas nativity scenes in it and using it to ruin their cheating boyfriends’ lives is unclear, but its dual utility for both beauty and war started early. In the 1940s, the Army briefly considered shooting it out of the tail ends of their war planes to bungle enemy radar (though they eventually decided against it). Today, the glitter biz is a massive and multinational — though, ironically, somewhat opaque — industry. Glitterex, one of two major American glitter manufacturers, is a $100 million a year enterprise. Meanwhile, glitter bomb company ShipYourEnemiesGlitter.com, which once sold for $85K, is now a six-figure empire.

The appeal of these products is obvious: Glitter is “cute” and “revenge is “ugly.” Putting them together gives you retribution with a sense of humor; a winking fuck-you too adorable to avenge but too inconvenient to ignore. More importantly, glitter is forever. As Sean discovered in the weeks and months after the bomb, every shiny speck he found on his toothbrush or socks reminded him of what he’d done. “It, uh, got the point across,” he admits.

But while glitter seems like a cheap, easy and inoffensive way to spite your foe, it’s also extremely controversial. Not only is it incredibly difficult to get out, it’s also dangerous to ingest, terrible for the environment and can scratch the shit out of your nose and corneas. In 2018, one woman was almost blinded by a glittery Christmas card, another lost her eye to a speck of sparkle, and a few years earlier, a 7-year-old boy was left paralyzed and comatose after inhaling the glitter he put inside a whistle.

Because of this, it’s often referred to as “sparkly anthrax” or the “herpes of arts and crafts,” and more than a few people have earnestly suggested it be outlawed and banished from this planet. One very small-scale congressional petition from 2015 even argued that it should be banned because “you cannot stop glitter from embedding into your soul and claiming the happiness you could have experienced.” The author’s recommendation? “Get rid of this hell spawn immediately.” (Interestingly, Mariah Carey has also described her 2001 album Glitter as a project that “almost ruined [her] life.” Coincidence? Please.)

Some lawyers and legislators have argued that using glitter in revenge plots constitutes assault or battery, and a handful of cases have been tried as such. But this hasn’t stopped people from making their revenge plots political. A number of high-profile conservatives such as Newt Gingrich, Michele Bachmann and Rick Santorum have been glitter-bombed in public, in some cases more than once. In 2019, a Minnesota man named Nick Espinosa even attempted — unsuccessfully — to glitter-bomb Donald Trump.

All of this is complicated by the identities of glitter bombers themselves. Because glitter has long been coded as a stereotypically “unmanly” and associated with crafts, the people who use it are usually women and/or queer. In fact, some of the first adopters of glitter were drag queens of the 1930s, and it’s been an integral part of queer fashion, nightlife and performance art ever since. It’s also connected to protest and defiance; in the Glitter + Ash movement, churches show support and solidarity for their queer parishioners by mixing purple glitter and Ash Wednesday ashes (because glitter, like love, “never gives up”).

Meanwhile, as some male recipients of glitter attacks love to point out, the little metallic sparkles aren’t just activist tactics or instruments of petty revenge; they’re weapons in an all-out gender war. This recently came to light on the r/mensrights subreddit after a TikTok video of a scorned woman tossing glitter all over her cheating boyfriend’s apartment went viral. In the clip — which was obviously set to Carrie Underwood’s “Before He Cheats” — she spews a menagerie of glittery colors on his couch, carpet, sink, towels and toilet, signing off with a big thumbs up so he’d know exactly who’d made his life miserable. So far, the video has been liked more than 5.2 million times, and has received an avalanche of media coverage. The vast majority of it was cloying and congratulatory, with the overall tone being, “You go girl! Get that revenge!”

Men’s rights activists — who often argue that men are oppressed — were pissed. In a comment thread about the video on Reddit, one guy pointed out that the only backlash the video received was over the glitter that fell in the pet food bowls, not that it could have potentially harmed a dude. “It’s so funny that she did this to a man, but if she’s done it to some dogs or cats, that would be a bad thing,” he writes.

“Oh, the entitlement,” says another. “Men aren’t allowed to take revenge, but it’s so acceptable among women that they get cute adjectives like OP pointed out [the glitter-throwing woman was called both ‘crafty’ and ‘original’ in a Daily Record piece].” A third suggested that “low quality women” are often praised for getting revenge on cheating men, but men are called “monsters” for doing the same things to them.

Never mind that some people cover their partners’ belongings in glitter because they were cheated on; the issue for MRAs is that doing so constitutes some type of “female privilege.” Yet, like many MRA-isms, that argument is myopic. A quick Google search reveals that men are ruining people’s days with adorable sparkles at least as often as their female counterparts — regardless of whether or not it’s deserved — and there appears to be no such division in the way glitter is used to fuck someone over. In one video, a conniving Kyle pours an entire container of gold glitter on his girlfriend’s head during a photoshoot, simply because she “loves glitter so much.” In another, some guy teaches you how to make DIY glitter bombs from scratch like a craft-store Timothy McVeigh. And, in 2018, former NASA engineer Mark Rober built a glitter bomb that he combined with emissions of an “aerosolized fart” to trap thieves who were stealing packages off his porch.

In the game of revenge, glitter clearly has no allegiance. It does, however, have sufferers, one of whom is a redditor who got hit with a glitter bomb containing tiny, dye-covered projectiles that stained his skin with imprints of little pink penises. Posting in r/wellthatsucks, he noted that, like Sean, he’d also cheated on his girlfriend. When girlfriend #2 found out, she sent him this: 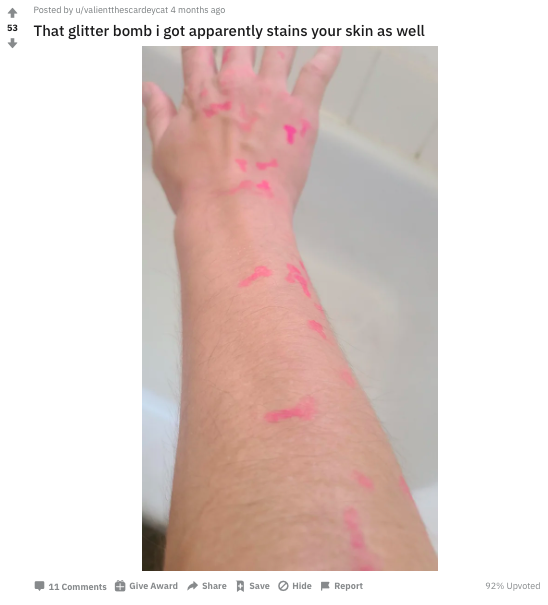 But glitter isn’t just about revenge. For people like 22-year-old Mack, it’s more of a good-natured, mildly annoying prank. She has no idea why she woke up one day and decided to glitter-bomb her entire family, but so far, she’s sent glitter-filled letters and packages to her dad, little brother and boyfriend, and is currently plotting a special surprise for her boyfriend’s sister. “It goes everywhere,” she says. “They’re not impressed.”

According to glitter survivors on Reddit, Twitter and beyond, it takes roughly three months to get your life back in the wake of a glitter attack, but in some cases, the carnage devolves into seven-year superfund sites that continuously birth tiny microparticles from hell. The internet has tried its best to come to these people’s rescue with articles and videos about how to remove glitter from every body part and surface imaginable, but for those like Sean, it’ll be a long time before they truly evade its glitzy grasp.

“My best advice is don’t do anything that deserves glitter,” he says. “I fucked up, but that was two years ago, and I’m still paying the price. I guess all that glitters isn’t gold.”

In his case, he says, it’s silver.