The Saga of Gerald, the Turkey From Hell, Who Nearly Destroyed Oakland

From his rose garden lair, this 25-pound beast spent nearly a year kicking, clawing and pecking at locals until he’d brought the whole city to its knees

In Godzilla movies, the city-destroying lizard emerges from the deep after human beings disturb his home with nuclear weapons. He is a reaction, we are the cause. His carnage is poetic justice, and another cycle of violence motivated by humanity’s murderous ways. Godzilla isn’t the villain so much as an expression of our own wanton destruction.

During the early days of the pandemic, a similar monster emerged in Oakland. He, too, was a response to human intervention in his home environment. His campaign of terror was unrelated to the virus, yet many who encountered the beast believed that coronavirus is why he turned aggressive. Certainly, something in him awoke and caused him to start attacking the people of Oakland. The monster, who’d been known to many to be a docile creature, suddenly wanted blood. He wanted to feed on the fear of his prey (in fact, his favorite targets were older women and small children). He wanted to see people run from his claws, his kicks and his lacerating beak, scattering just like the denizens of Tokyo at the sight of Godzilla.

This monster’s name: Gerald the Turkey.

In the Before Times, Gerald was a beloved figure in the neighborhood. On weekday mornings, he would start his day by strutting across the Morcom Rose Garden to go and wait on the sidewalk with commuters in the sunlight. But late last year, per the news outlet Oaklandside, locals like Molly Flanagan, who were familiar and friendly with Gerald, noticed that the bird they knew was no longer acting like himself. “Flanagan said she first noticed the change when she was in the rose garden with a friend and Gerald wouldn’t leave them alone,” Oaklandside reported. “The bird ‘fixated’ on her friend, sending what Flanagan described as ‘a lot of energy’ their way.”

Another local, Alexis Morgan, recounted to Oaklandside a tale of Gerald relentlessly pursuing an older woman around the rose garden “until she was forced to climb a tree to escape.” Morgan acted to save the older woman, but Gerald had something for her, too, “landing a ‘kangaroo kick’ on her, leaving the imprint of a turkey foot on her thigh.”

By the time May rolled around, things were really starting to get out of control: 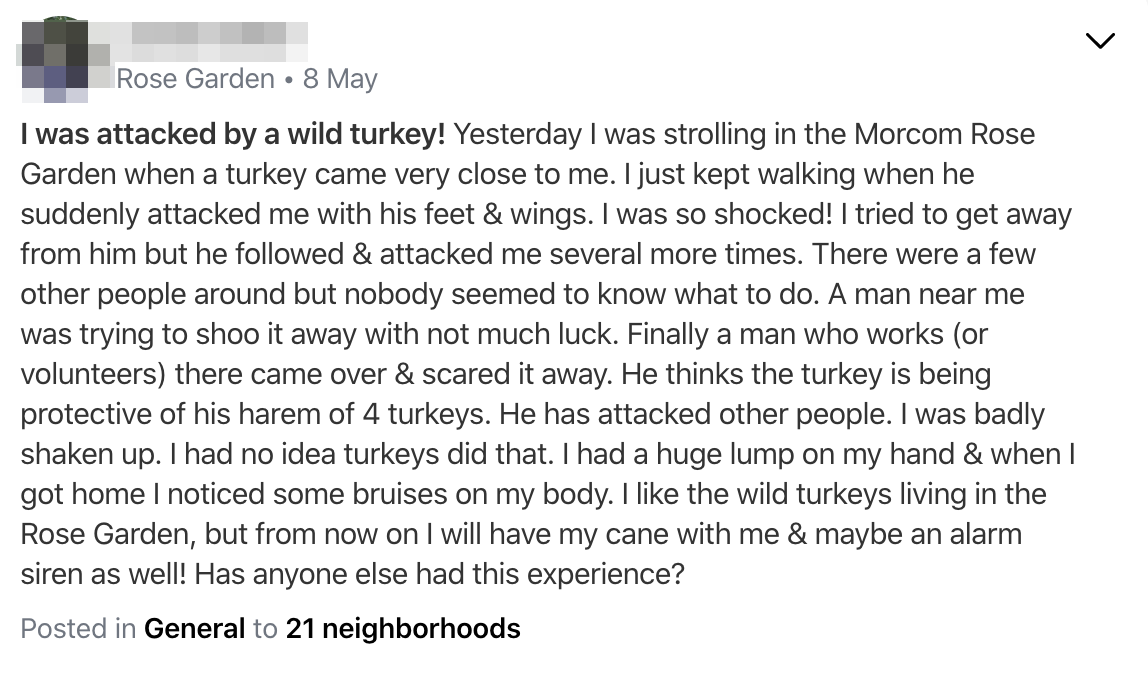 But as Nextdoor and Facebook exploded with “Gerald attacked me” stories, a chorus of other voices simultaneously rose up to counter that narrative. The bird defenders argued vehemently that the problem wasn’t the wild turkey. The real problem was the people violating the state’s stay-at-home order, because if they adhered to the signs that clearly stated that the park was closed, Gerald wouldn’t have anyone to attack — a stance the official rosarian of the Rose Garden publicly disputed. “I’ve noted Nextdoor posts stating, ‘The only reason the tom is attacking is because he is provoked’ or ‘because you tried to take a selfie with him’ or ‘a turkey won’t attack unless you are too close to his hen and chicks,’” he wrote. “This may have merit in some cases, but I assure you that is NOT the case with this tom! To those that are posting this misinformation, it might be wise to delete such posts. I fear such posting might lull an innocent person to risk attack.”

In the San Francisco Chronicle, Ann Dunn, director of Oakland Animal Services, explained that her hands were more or less tied. For starters, the City of Oakland lacks any jurisdiction for wild turkeys. One step above that, California state law requires that humans seek a way for citizens and animals to share the municipality before resorting to “removal or termination options.” As such, Dunn hoped that nature might correct the problem, citing breeding stress as likely a major factor in Gerald’s new viciousness. She reasoned then that once Gerald no longer felt a need to protect his mate(s) and chicks (probably at the end of mating season), it was possible that he’d stop throwing flying kicks and using his beak and claws as weapons.

But mating season came and went, and the saga of Gerald the Turkey only continued to grow into a major source of tension between neighbors and park-goers.

Dunn next attempted to recruit volunteers to patrol the park (who she would train personally). They would approach strangers and offer to teach them how to enjoy the rose garden without disturbing the violent turkey that lived there. “I am hoping to give each of you sufficient orientation that you will feel comfortable to orient others, and that this can become a community effort,” she wrote in a statement shared on the Friends of Morcom Rose Garden Facebook group. “If you are available to help organize this and be a point of contact for new volunteers, please let me know. […] I am hoping we can get to a place where there are two people per shift, from 9 a.m. to 5 p.m., so no one is there solo. Animal Control Officers will be there as much as possible, but we have pretty limited resources, and they are stretched thin on calls from the community, so I don’t want to over promise on that.”

When that approach also went nowhere, city leaders turned to the California Department of Fish and Wildlife (CDFW), asking the state agency to remove and re-home Gerald. But the CDFW said its hands were likewise tied by state law, and it could just instruct the city to immediately shut the park to all visitors, which it did. 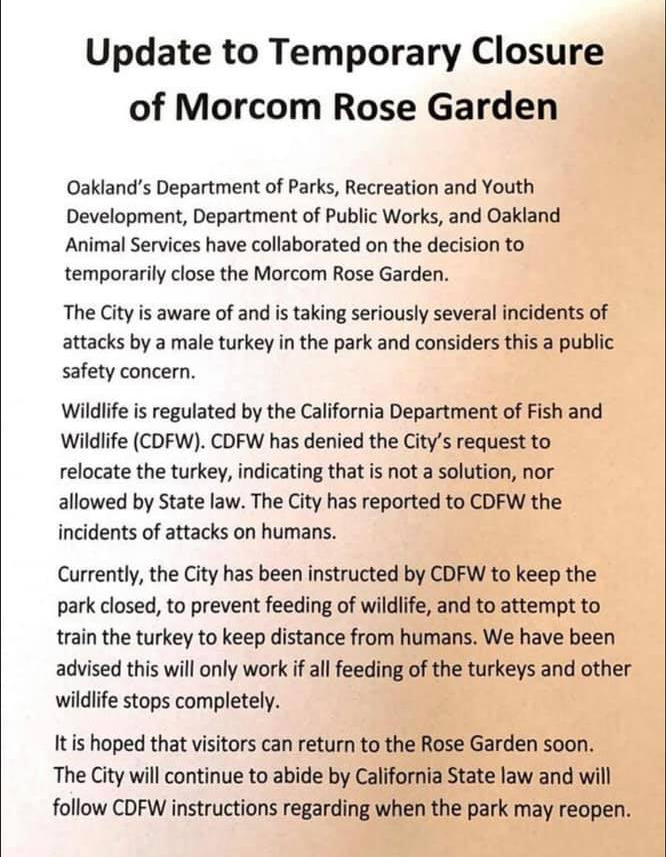 This development, however, didn’t go over well. Back on Nextdoor and Facebook, the issue was fast becoming almost as divisive as Qanon.

To calm the fear and anger and quell the many accusations flying around, a depredation order came through a few days later. It approved not only the removal of the wild turkey from the park, but it also meant that Gerald could be humanely put down (if he wasn’t legally captured and re-homed).

Per usual, the reaction on Nextdoor was hot. Gerald’s discreditors loudly celebrated the depredation order and eagerly awaited the reopening of the park and rose garden. On the flip side, Gerald’s supporters voiced their ardent concerns that the wild turkey must be protected at all costs. And of course, there was also a Change.org petition. 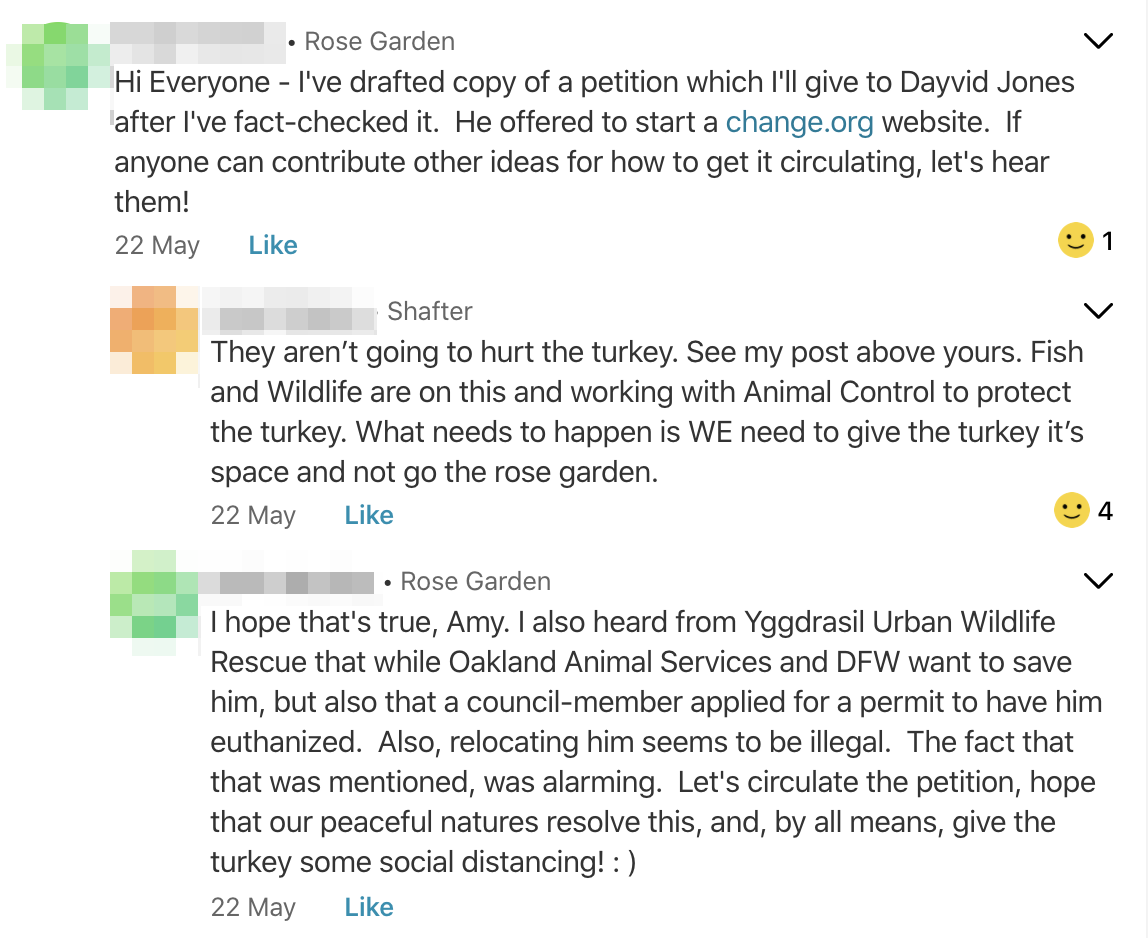 There was fan art of Gerald as well. It was posted as an act of solidarity, a show of support of the bird’s inalienable rights.

Meanwhile, CDFW set about the more difficult and frustrating task of capturing Gerald. It turned out to be no small feat — and in the end, impossible. “In July 2020, CDFW staff made several attempts to capture the turkey, relying primarily on trapping using food attractive to turkeys,” a statement released by Oakland Animal Services read. “The park is full of accessible food, including evidence of human feeding, so this effort has been ended. CDFW has now authorized staff from Oakland Animal Services to continue the effort, with a plan for CDFW to transport the turkey to a local wild area that has minimal human access and no access to hunters. This effort is ongoing.”

Translation: “Look, we tried to catch your monster bird. But we can’t do it when there are people working against us. So, if you catch him, let us know. Otherwise, good luck.”

Then, suddenly, strange new rumors began to spread about the wild turkey: Was it even Gerald in the first place?

Some people, like Royal Krieger, a volunteer rosarian, put forth the theory that “Gerald” may not be the same bird as before. Krieger reported that he’d witnessed a fight between Gerald and a younger rival. The two wild turkeys had fought to the death and only one survived (in fact, Krieger had found the dead body of the loser). He suggested that perhaps this dead bird was Gerald, and it was his rival who was attacking everyone.

The thing is, while the soap-opera plot twist of an evil turkey twin is fun to consider, even Krieger doesn’t fully believe it. That’s because the carcass of the dead turkey he found had its full plumage, while Gerald is known for his missing tail feather.

Finally, in September, Rebecca Dmytryk, director of Wildlife Emergency Services, stepped into the breach, volunteering to enter the Morcom Rose Garden, aka Gerald the Turkey’s lair, by her lonesome. To catch the dreaded bird’s evil eye, she dressed like a feeble old woman. She felt certain this would incite his bloodlust. She also tried something sweet as an additional incentive. “I baited him in with blueberries, kibble and sunflower seeds,” Dmytryk told the local ABC television news affiliate.

As she pretended to be elderly and infirm — the turkey’s preferred victim — Gerald strutted over in her direction. He puffed up, chuffed his plumage and scratched the earth, flashing aggression with every feather that decorated his massive 25-pound bulk. “I saw his reaction to me, and I said, ‘Oh, you want a piece of this? I’ll give it to you,’” Dmytryk relayed to the ABC affiliate.

Gerald drew closer and closer to her until, finally satisfied by some bird logic, he felt close enough to charge her. Dmytryk, however, was ready for his bull rush. She finessed her way around him, and with a quick, well-practiced hand, she grasped him by the neck. Next, she yanked up, rendering him as helpless as a hatchling.

And with that one brave grab at the beast’s throat, the five-month ordeal was finally over. 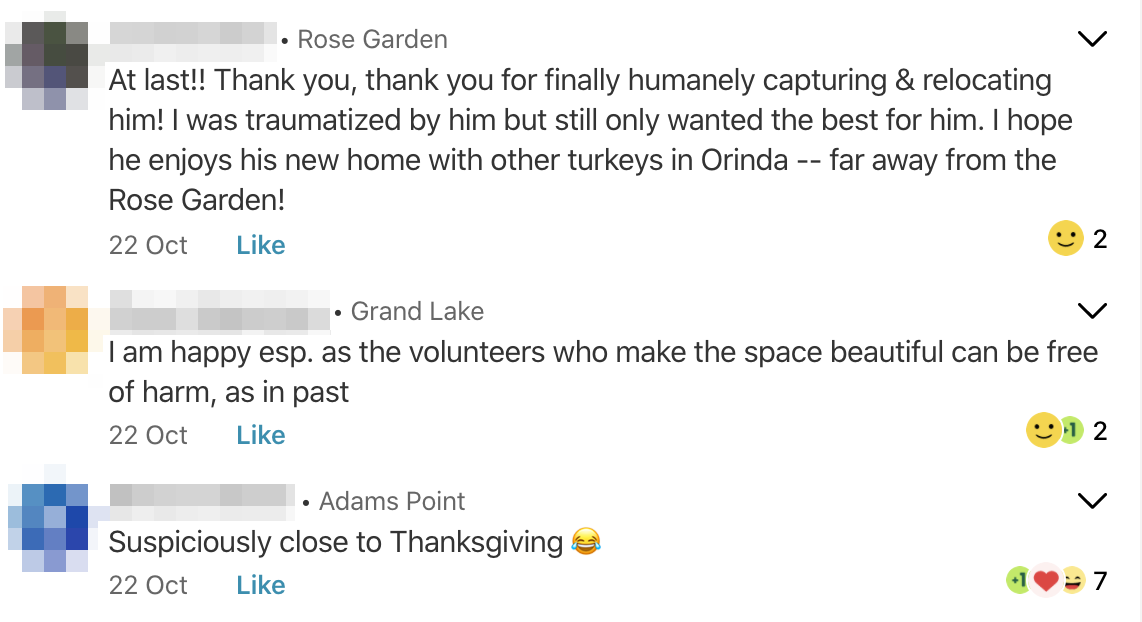 After his capture, Gerald was taken one county over, to the town of Orinda, and on the side of a golden California hill covered with oak trees, a cardboard box was overturned and Gerald spilled out. He rustled his feathers, took a look at his new digs and then scrambled away.

It was as if Godzilla had returned peacefully to the sea.