Young Men Are Risking It All for Frat Fight Nights

A 20-year-old in Las Vegas died last month after representing his fraternity in a three-round charity boxing match. Though it’s a rare tragedy, his death is a metaphor for the reckless sense of invincibility that fraternities sell

By the time 20-year-old Nathan Valencia stepped into the ring, the small but vocal crowd at the Sahara Event Center in Las Vegas was riled up, eager for the main event of the evening.

He was representing UNLV fraternity Sigma Alpha Epsilon against Emmanuel Aleman of Kappa Sigma, which was hosting the “Fight Night” event on November 19th. Eight fights had already unfolded, and Valencia was the crux to a grand finale for the charitable event.

Valencia and Aleman had no formal boxing experience. But the two donned headgear and gloves, then strode to the center of the ring to begin a brawl over three rounds, lasting three minutes each. In a recording of the fight, their lack of technique is obvious: Both fighters swing wildly, seemingly trying to decapitate the other with as few haymakers as possible. There’s not a single body shot to be found — just head hunting, over and over again. The momentum keeps shifting during the first two rounds, with both Valencia and Aleman seeming to have the upper hand for brief moments. In the third, however, it’s obvious that Valencia is exhausted — at one point, he eats 13 consecutive punches without landing one of his own.

This is a crucial juncture in the match: Valencia, overwhelmed with strikes, turns his back and runs to another corner of the ring. But the ref stands there, staring, unwilling to step in. With only a few moments left in the match, the 20-year-old shuffles around, unable to throw a punch. After the bell rings, you see Valencia stumbling out of the center of the ring before the announcement of the winner.

Four days later, Valencia died in the hospital after struggling with brain injuries and internal bleeding. It was obvious what killed him — but the aftermath has left UNLV students, fraternity leaders and parents scrambling for signs that this could’ve been prevented. Multiple accounts from eyewitnesses suggested a lack of proper protocols and leadership for the “Fight Night” event, including ill-fitting safety gear and limited oversight as to how competitors were feeling.

“[When] I walked in there, I just had a really weird feeling. I remember in one of the fights, someone’s headgear fell off. And then during Nathan’s fight, you could see that he was just trying to get away to catch a breath,” Valencia’s girlfriend, Lacey Foster, told KTNV.

The 9-1-1 call for Valencia indicates that he collapsed suddenly, while a different part of the crowd was getting riled into a drunken fistfight. Although emergency medics responded quickly, the Valencia family’s lawyers have alleged that the Fight Night referee was unlicensed and untrained, and additionally was drinking beer throughout the evening. They also claim there were no medical personnel on site, despite a history of participants being knocked unconscious at previous unsanctioned “UNLV Fight Night” events.

Valencia’s death will likely mark the end of such events, and the Kappa Sigma fraternity has been suspended while the Nevada State Athletic Commission investigates how the fight was held in the first place. But it won’t make a difference at dozens of other American universities that hold long-standing amateur boxing and MMA events, which are often used as charitable fundraisers and draw a lot of attention from the Greek community.

A University of Georgia event this fall raised more than $20,000 and drew 1,500 fans to see sorority girls and frat brothers swinging for the fences in three-round bouts. Then there’s Sigma Chi Fight Night at the University of Texas, a sanctioned event that’s entering its 29th iteration this year and has raised “hundreds of thousands” for philanthropic causes. You can find similar examples across the country, and these amateur boxing matches have been happening for decades, becoming milestone events in the fraternity calendar for houses like UNLV’s Kappa Sigma.

Through it all, fatalities have been exceedingly rare, just as they are in professional boxing. But the chaotic lack of planning at UNLV and beyond, and the potentially lifelong consequences of brain trauma, are shining a glaring light on why and how young men continue to risk their health in testosterone-driven displays of brute force.

The death of Valencia is a reminder that “fight nights” are another dangerous wrinkle in the hyperbolic macho culture of American fraternities, and a clear example of how pushing boundaries of violence leads to unintended consequences for all involved.

Could professional referees, cornermen and a sanctioning body have prevented a tragedy? On paper, maybe. Professional boxing trainer and gym owner Armin Van Damme told KTNV that the participants in the UNLV Fight Night were obviously unskilled and simply looking to brawl — a bad combination when you add in uncertain health backgrounds, fatigue and little oversight of fighters’ conditions. Van Damme also added that he doesn’t allow his students to fight other people until they’ve learned proper mechanics, including defense, over many months of training.

“When you have tools, you need to be able to use those tools. These kids didn’t have any tools to use. It was just a slug-fest,” he said.

Even during the fight, there may have been a missed opportunity to save Valencia’s life. As legendary boxing ref Richard Steele told local news channel KLAS, seeing Valencia turn his back on his opponent after taking numerous strikes in a row was a clear sign that a stoppage was justified. “Anytime I see a fighter turn away from the fight, the fight is over,” he said.

But other examples suggest that having these safety measures still cannot prevent a young person from dying in a public brawl. In 2018, University of Tennessee junior Tanner Wray collapsed and died of cardiac arrest while competing at a charity boxing match for frat brothers, despite the presence of ringside doctors, professional cornermen and judges. An investigation found that he had been training hard and using Adderall, potentially to lose weight for the bout, and took more of the stimulant right before his fight. (The 40th iteration of “Boxing Weekend” is being held again in February 2022).

Despite the risks, frat boys apparently can’t help slipping on boxing gloves and going at each other, even hazing new pledge members by making them fight each other, as a 2015 investigation into the misconduct of Kappa Delta Rho at Penn State found. But such recklessness is par for the course in the American Greek system, which has been responsible for a steady string of young male deaths, often due to alcohol but also as a result of falls and blunt trauma. In so many cases, the fraternity brothers tasked with taking care of their own end up abdicating their responsibility, leaving injured men on the verge of death, to be discovered in the morning when they’re blue and unresponsive, as with the 2021 case of Sam Martinez.

There is tragic irony in young men dying because their brothers in the society they pledged to uphold simply didn’t see the danger they were in (or did, and attempted to cover up the consequences). Fraternities and Greek life is sold as a safe space for men to bond and be boys, but Valencia’s death and a sketchy history of free-for-all boxing matches is a metaphor for how the Greek system generates violence through the reckless, ego-fueled desire to create something memorable.

So it was with Valencia, who swung and got hit until the final bell, listening to the crowd roar in support of his war against another man. The fight was a distillation of the power of fraternal belonging, and the desire to represent the brotherhood with ferocious honor, even in the face of doubt. But like the many documented problems with fraternities, from the systemic way they facilitate mass sexual assault to the lingering racism that allows Greek life to be a hub of white supremacism, Valencia’s death isn’t a singular incident, but part of a spectrum of attitudes and behaviors that lead young people to harm.

In a parallel universe, the UNLV brawl ends very differently, perhaps with Emmanuel Aleman, Valencia’s opponent, getting hurt instead. There’s a disturbing moment in the footage of their fight when you see Valencia swing hammer fists straight into the back of Aleman’s skull — a dangerous and forbidden move in professional fighting, as it can damage the brain stem.

The crowd merely screams its approval, begging the fighters to brawl even harder. The ref does nothing but stare. And Aleman shakes it off, ready to return fire, no matter the consequence. Now he’ll have to live with the aftermath, too. 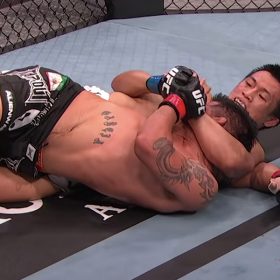 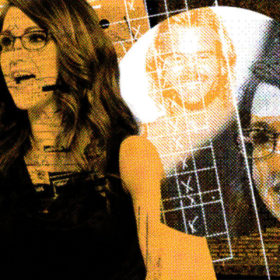