Finn Deserved Better — And So Did Black ‘Star Wars’ Fans

‘Disney better not screw this up,’ I thought. We all know what happened next. Of course, there was an easy fix all along.

We see a stormtrooper with a bloody red handprint on his white helmet. “I was raised to do one thing…,” a voice narrates. The stormtrooper takes off his helmet with the bloody handprint.

Those were my exact thoughts when I first saw the character of Finn in the trailer for The Force Awakens. My second thought was: They better not fuck this up.

Well, we all know what happened on that score. Finn is now synonymous with “how to betray a beloved character.”

FN-2187, later renamed Finn, played brilliantly by actor John Boyega, is born to be a tool of the First Order, which is a rebooted version of the old Empire. Finn is a Black man born without a name, nothing but a number sentenced to a life of space bondage. As a grown man, he resists that fate and frees himself. This was powerful narrative territory for Star Wars to be navigating for the first time.

Later on, in perhaps the most exciting shot of the trailer (at least for me), we see Finn standing in a frozen forest. His eyes are steely, determined. He looks every inch the hero — defiant, ready. He turns on his lightsaber. Its blue glow leaps to life just as we see the villain Kylo Ren and his red lightsaber spitting hot energy from its hilt. All of that tension, all of that conflict, absolutely crackling with dramatic potential. Only for all of it to fizzle away in the three films that followed.

We started with a Black stormtrooper who becomes a conscientious objector, follows his moral compass and joins the rebels to risk his life in order to save the galaxy. Somewhere along the way, though, the filmmakers made that character boring. That’s why Star Wars fans are still so pissed at the great betrayal of Finn. It’s why his name was trending on Twitter on Tuesday, a full year after the final film of the newest trilogy was released in theaters.

That last point is key: Finn deserved better. Hell, we all deserved better. The “we” in this instance is Black sci-fi fans. We’ve had to live on some thin soup from Hollywood for far too long. (Although we do have to give a shout out to Star Trek for Capt. Sisko.) For Blerds like me, we held out a small hope that it might be different this time. That Star Wars might finally move on from its Victorian-Nazi melodrama past and embrace the diversity of our moment. Specifically, by creating a credible Black hero.

The first time Star Wars added a Black character, we got a space pimp. Lando Calrissian felt like he’d escaped from a Blaxploitation film or a 1970s malt liquor commercial. But at least he was cool — paper thin, but undeniably cool. The next time Star Wars decided to dip the franchise’s ice cream scoop into what they treat like 31 flavors of ethnicity, they scooped out Samuel L. Jackson as Mace Windu. Look, I love Samuel L. Jackson, but Mace Windu feels like the only Jedi who’s from Earth. Like, I could fully believe Mace Windu was born in Detroit.

Then, finally, we got John Boyega as Finn.

He looked to be a fully realized Star Wars hero who was Black. But ultimately, all we really got was someone yelling “Rey!” every 20 minutes. He yelled it like, if he didn’t shout it all the time, she might wander into traffic. To that end, there are whole iterations of memes based on how much Finn yells “Rey!” 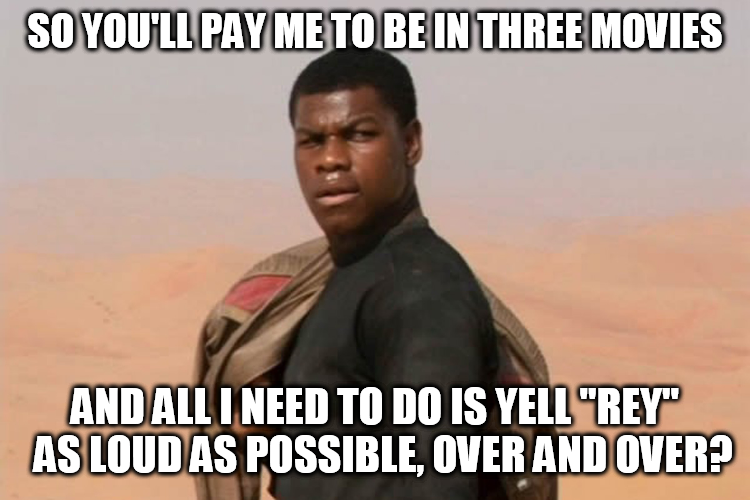 It’s not an exaggeration to say that a quarter of Finn’s dialogue boils down to status updates on Rey. He recites her name so many times that it can fill a two-minute supercut all by itself:

You can also find plenty of video essays about how Boyega had the most wasted character in the series, as well as others that investigate why Finn was such a letdown. By far, however, the most compelling of the Finn analysis is the video below, made by Okiro, a young Black creative.

In fairness, as Okiro points out, The Rise of Skywalker doesn’t get the credit it deserves for how it attempted to repair Finn’s dignity after all the comic relief he was tasked with in The Last Jedi. Still, all anyone seems to remember is…

In the end, it just doesn’t feel like the Star Wars creative team had the courage of their convictions. Maybe the best example is that Finn is originally hyped as possibly a Jedi. In fact, he’s introduced to audiences with a lightsaber in his hands. There is even reportedly storyboard art that hints of plans for him to have his own lightsaber. But by the third film, he’s left to ride a horse on the surface of a star destroyer, downgraded to “force-sensitive,” not swinging in like the lightsaber-wielding king he should be.

To say nothing of Finn and Rey’s space-opera version of the sitcom game: Will they… or won’t they? Which one it is, is anyone’s guess. I mean, what was Finn so desperate to confide in Rey in The Rise of Skywalker — something that he’d never told her before, something that he felt the burning need to tell her just before they were both about to be swallowed up by what appeared to be their imminent deaths? No one knows! That storyline gets dropped like yesterday’s fashions.

As such, by the end of the franchise, Finn and Rey wind up as something akin to war buddies. There were numerous fan leaks and theories that suggested the two would end the new trilogy together, holding hands, on Tatooine. But alas, such a storybook ending wasn’t meant to be.

And so, to get justice for Finn, Blerds have had to take matters into their own hands, cutting together versions of the latest trilogy where Finn is what he should have been all along — the star.

Of course, there was an easy fix to all of this: Disney should have involved Black creatives from the jump. Which is also hopefully the lesson here (for Disney and every other studio). Because that’s what Finn — and all us Finn stans — really deserved.