There are plenty of platitudes I find insultingly vapid, but high on the list is “God won’t give you more than you can handle,” which is something I hear sometimes in response to people who are going through extraordinarily difficult times. On the one hand, it’s meant to seem encouraging, but it’s also incredibly patronizing and dismissive — essentially, “An arbitrary higher power thinks you can deal with this, so just pipe down.” It’s a condescending way we minimize other people’s pain, which is shockingly easy to do when it’s not our own. Such bromides are our attempt to sidestep empathy, deflecting the responsibility of helping others in need. “God won’t give you more than you can handle” might as well be “Don’t bother me with your problems.”

I thought about that expression a lot during Father Soldier Son, a remarkable documentary that looks at a single father and his two young sons over the span of about 10 years. Theirs is a religious household, and so I wondered if Brian Eisch, an Army veteran who gets severely injured while serving in Afghanistan, was ever told that platitude during his ordeal — or the subsequent ordeals that unfold over the course of the movie. Sometimes, people are given more than they can handle — more than anyone should have to handle — but they have to keep going anyway.

In their unobtrusive but probing, insightful documentary, which arrives on Netflix this Friday, filmmakers Catrin Einhorn and Leslye Davis lay bare the burdens that military families face, while at the same time subtly examine the macho culture that’s endemic to this way of life. To evoke another pointless platitude, Father Soldier Son is far sharper and compassionate than a mindless “Support the Troops” homily — it’s a moving, incisive look at how America’s endless wars chew up some communities, which lack the resources and opportunities to avoid being devoured.

Father Soldier Son started off as a reported piece by New York Times journalists Einhorn and James Dao, who in 2010 wrote about how families are affected when soldier fathers are sent overseas. One of the men profiled was Eisch, who was raising his boys — Isaac, who’s 12, and his seven-year-old brother Joey — on his own in upstate New York. (We don’t hear much about the birth mother in Father Soldier Son other than that she left and the judge decided to give Eisch full custody.) Eventually, though, Einhorn started working with another Times journalist, Davis, to turn the project into a film, chronicling this family’s story over a span of years.

Great documentaries are often a product of luck: A filmmaker picks the right subject at the right time and, suddenly, a seemingly modest story takes on larger dimensions and greater stakes. Einhorn and Davis certainly benefited from luck and good timing, but the film’s rigor and muted tone are entirely of their own design, and it helps enormously in telling this bittersweet saga that ends up having more twists and turns than you might expect.

The first surprise development happens early on in Father Soldier Son. After an opening sequence involving Eisch’s happy reunion with his boys, who are immensely proud of their platoon-sergeant dad, they soon must say goodbye to him again once he heads back to Afghanistan and to a war that, at that point, is already nearly a decade old. On this tour, though, his left lower leg is struck during a firefight, and he’s sent home. It’s a nasty injury — amputation is suggested, which he refuses — but Eisch is determined to put his military service behind him and get on with his life. In these initial sequences, Eisch comes across as a sweet, solid guy — a good father and a positive person. He’s someone you root for. 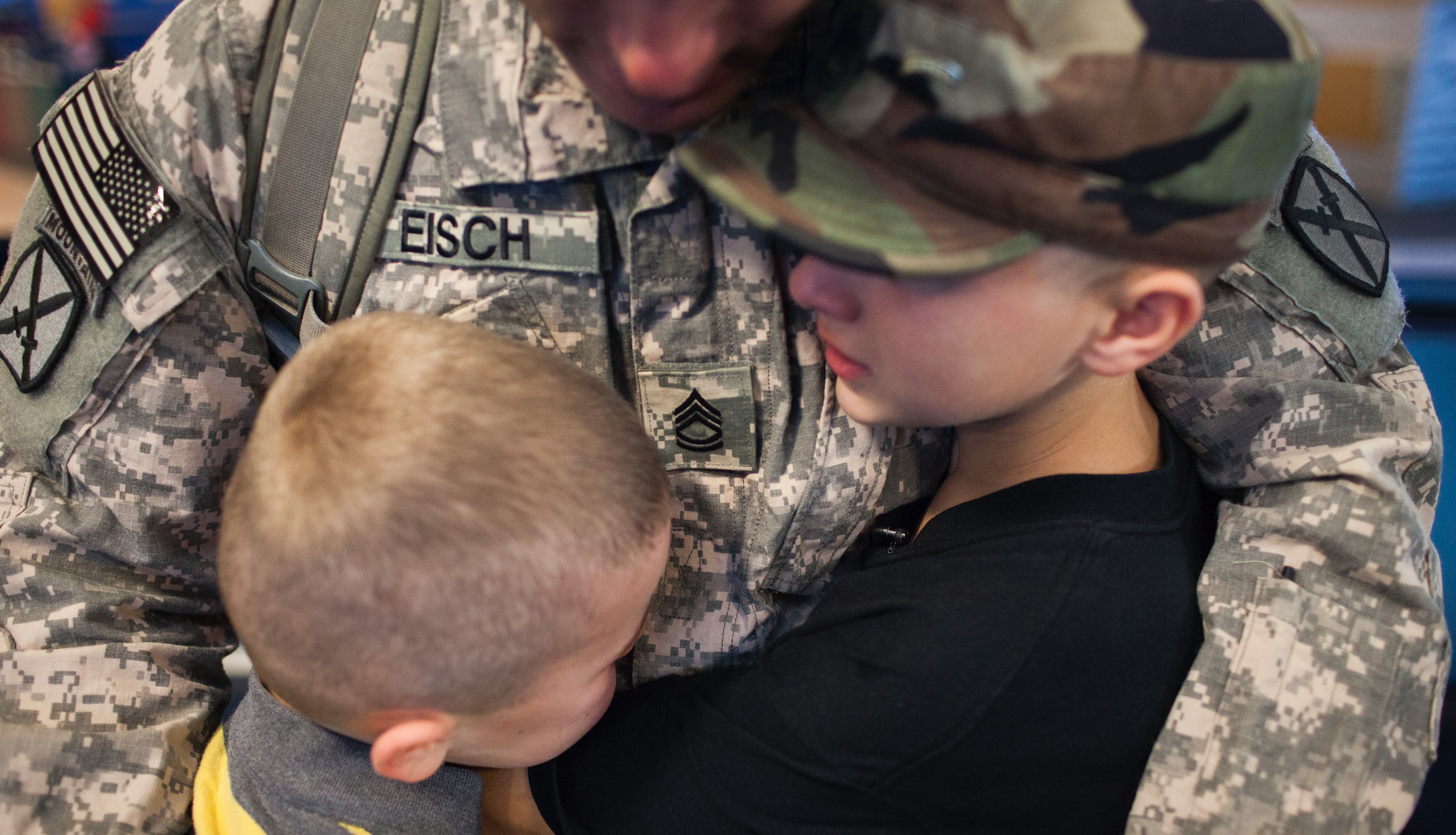 But then Einhorn and Davis jump ahead three years. It’s now 2014, and we encounter a very different Eisch, who is depressed and much heavier. Now confined to a wheelchair, the chiseled, strapping soldier we knew is gone. At long last, he’s going to have his left leg amputated below the knee, holding onto hope that prosthetics can improve his quality of life. We also get to know Maria, Eisch’s devoted new girlfriend, who has three kids of her own. They have a loving relationship, and Isaac and Joey still adore their father, but we sense that the Eisches have learned to endure a lot — much of it unspoken because Eisch isn’t necessarily a guy who opens up. This is a household where men don’t cry or really talk about their feelings. But you can feel the sadness and anger in the room as Eisch has disappeared within himself.

A good portion of Father Soldier Son charts Eisch’s amputation, recovery and aftermath, and Einhorn and Davis focus on the mundane, everyday aspects of his kids’ maturation and Eisch’s struggles adapting to this new life. (He can walk, but not as well.) Because the documentary spans several years — and because masculinity becomes such a central theme — you might be reminded of Boyhood, which similarly chronicled a boy’s emotional and physical development, as well as his changing relationship with his father.

Consequently, watching Isaac and Joey grow up is one of Father Soldier Son’s most poignant features — specifically, in how they alternately try to emulate or push against their dad’s influence. Eisch represents the third straight generation in his family to join the military — his older brothers didn’t, so he felt it was his responsibility to do so — and at different times, his boys either want to enlist or reject this birthright.

There are occasional on-camera interviews, and as a teenager, Isaac wonders if it was worth it for his dad to get maimed in order to serve his country. Around the same time, though, Joey sounds gung-ho about signing up, announcing, “I probably won’t even graduate, I’ll probably join when I’m 17. I want to run around, shooting guns, doing fun stuff, seeing all the cool stuff. Like, I bet you we’ll be in a really cool war somewhere else.” Joey’s not afraid of being shot in combat like his dad. “I bet you it wouldn’t feel good,” Joey tells the filmmakers, “but I’d know I did something right.”

Father Soldier Son doesn’t editorialize — we never see or hear the filmmakers — but unlike the Times’ irritating habit of running toothless “Why do red-state folks like Trump so much?” articles, the documentary is inquisitive and uncondescending in its depiction of these small-town Americans who don’t have much education or economic prospects. (At one point, Eisch mentions that the community has been hard hit by the recent closure of a nearby nuclear plant.) Father Soldier Son is no bleeding-heart paean to the “common man,” but it doesn’t pity Eisch and his kids, either. Rather, Einhorn and Davis’ sensitive but hands-off approach allows for a quiet dissection of how the Eisches represent a lot of patriotic American households who view military service as both a calling and an ideal career path. After all, no one else in town is hiring.

To Eisch, who derived a lot of his self-esteem from his service, enlisting is practically getting into the family business. So when Isaac starts insisting as a teenager that he won’t join the army — he wants to go to college and eventually become a cop — his dad almost seems to take it personally, shooting the idea down with a laugh. As far as Eisch is concerned, Isaac doesn’t have the grades or, more importantly, the discipline. And despite what’s happened to Eisch, he’s deeply invested in the idea of his kids enlisting — perhaps even more so because of his injury. In Father Soldier Son, he tells the filmmakers that he wishes he could be back in the army — at least there, he says, he had some power. Now, he just feels emasculated, struggling to find something that gives him a purpose. He’s a guy who defines himself by what he can do physically — fish or run or work out — and even with his prosthetic, he thinks he’s nothing. No surprise he’s putting his dreams on his boys.

In a thousand small ways, Father Soldier Son interrogates how this masculine/military mindset seeps into the family’s daily routine. When Eisch says goodbye to his children early in the film before that fateful return to Afghanistan, he warmly but anxiously tells them not to cry. Eventually, Joey gets into wrestling — that was his dad’s sport in high school — but he’s not nearly as muscular or aggressive as his old man. When the kid gets pinned, he bursts into tears, which displeases Eisch. As for Eisch, he’d rather bury himself in violent video games than talk to Maria about what’s bothering him. Nobody in Father Soldier Son is a real-America cliché — Eisch is a nuanced, kind soul worn down by his disability — but as the years go by, we see how one generation influences the next, often negatively. A father who has trouble articulating his emotions results in kids who have similar issues — and when another tragic twist occurs later in the film, the family is tested yet again. In one candid moment, Maria (who emerges as the documentary’s soulful center) confesses to the filmmakers that Eisch is adrift. (“Don’t let Brian fool you,” she says. “He’s not doing good.”) Her silent concern speaks volumes.

Whether it’s the horror of combat or the heartbreak of civilian life, the Eisches are given more than anyone should need to handle, and Father Soldier Son deftly illustrates how ill-equipped they are to confront these struggles. The documentary’s deceptive modesty — its small-scale humanity — has a cumulative power as we observe how a military family, despite the aid of some determined VA workers and a few others, is largely left to fend for itself. And because this culture is so fixated on conveying toughness — on never showing weakness — we see how hard it is for Eisch to deal with the shame and sorrow he’s experiencing over feeling worthless. (Or, as he puts it, being a “used-to-could.”) And all the while, the War in Afghanistan keeps raging on, sucking up more soldiers and destroying more families.

“I think one of the hard things about being a boy is being tough enough,” Eisch laments at one point. No one in Father Soldier Son should be questioned in terms of his toughness or patriotism. But what’s heartbreaking is that, deep down, Eisch still feels like he hasn’t given enough to his country. As a portrait of a family trying to hold together — and a country that still hasn’t reckoned with its nonstop wars and the men and women who sacrifice themselves for a questionable cause — this movie is almost too much to bear.