The fifth and final film in the Small Axe anthology isn’t based on a true story, but it’s very real to the man who made it. Oscar-winner Steve McQueen (12 Years a Slave, Widows) directed all five installments, but Education hits close to home because it’s inspired from circumstances that he, too, experienced. “I had an unfortunate time growing up as a Black child in the British education system. Sadly, I was not alone,” the 51-year-old director says in the movie’s press notes, later adding, “Education is extremely personal to me. I lived Kingsley’s life.”

Kingsley is the main character of this hour-long film, which, like all the Small Axe installments, concerns a West Indian living in London who’s experiencing racism firsthand. (The movie premieres on Amazon Prime Video on Friday.) Only 12 but already running the risk of falling terribly behind his classmates, Kingsley is illiterate, but as Education demonstrates, that’s not his biggest problem. Just as other Small Axe chapters chronicled bigotry’s immersion into every aspect of society — the judicial system (Mangrove), discriminatory practices (Lovers Rock), the police force (Red, White and Blue) and foster care (Alex Wheatle) — Education looks at racism through the specific lens of schooling. Kingsley needs to learn how to read, but the movie persuasively argues that Britain’s education system had long ago conspired to hold a lot of young kids like him back.

Newcomer Kenyah Sandy plays Kingsley, a character who McQueen (who co-wrote the script) based on his own upbringing. (“[His] family was very similar to mine,” McQueen writes in the press notes. “A mother working two jobs, a sister who is encouraging, only seeing a father at a glimpse, possibly in the morning and when he comes home for dinner.”) Growing up in the 1980s, Kingsley is a likable young man with a passion for space exploration — he longs to be an astronaut — but during a trip to the principal’s office, he receives some shocking news: From now on, he’s going to be bussed to a remote school for children who have “special needs.”

On the one hand, that sounds like it would be a good thing — he’s embarrassed about reading out loud in class, and could probably use the extra tutoring — but when he arrives at his new school, it becomes apparent that this institution isn’t really designed to lift kids up who need assistance. It’s essentially a dumping ground for students that the system has given up on — including children who, it appears, have severe emotional or mental issues. (One of Kingsley’s cohorts randomly makes animal noises.)

At first, Education could almost be confused with a rowdy comedy about the ineptitude of public education — indifferent teachers, colorful classmates — but McQueen soon explains precisely how horrifying Kingsley’s situation is. Living with a gruff, harried mom (Agnes, played by Sharlene Whyte), who has to be the disciplinarian in a home where the father (Esmond, played by Daniel Francis) is working several jobs (and is also illiterate), Kingsley is left to his own devices at school, basically just putting his head down on his desk and going to sleep. (When Agnes learns about Kingsley’s new school, the principal explains that the boy is being transferred because he tested poorly on an IQ test. She instantly becomes annoyed with Kingsley, wanting to know why he doesn’t apply himself more.)

It’s only after he meets Hazel (Naomi Ackie), a psychologist going undercover to infiltrate the “special needs” school, that he’s finally given a lifeline. Hazel is convinced that the IQ test is racially biased against West Indian children, who rather than being properly integrated and embraced in the wider U.K. education system are simply shunted off to schools with lousy teachers who have no desire to help them. Hazel and others have found proof of a targeted institutional effort to disenfranchise the West Indian population, branding its kids “educationally subnormal.” It’s not simply that educators are failing Black students — it’s that they don’t care at all, not wanting those students to “dilute” the test scores of their white peers.

McQueen smartly juxtaposes Kingsley’s interstellar dreams with his cruel reality. Obviously, the entire Small Axe series has been a deep immersion in the everyday racism that many experience, but there’s something especially insidious about how it plays out in Education. The shocking real-life disenfranchisement strategy eventually led to the rise of the Black Education Movement, but McQueen illustrates how this kind of racist program flourishes when it’s enacted against communities that don’t have the resources to defend themselves. Kingsley and his family are just squeaking by, and you can feel the tension between Agnes and Esmond as they debate what to do about Kingsley’s poor school performance. (His dad insists that Kingsley should just drop out and learn a trade — after all, that was good enough for him — while his mom expects more out of her boy.) Ultimately, Kingsley’s illiteracy and “low” IQ tests are part of larger issues he’s facing about the lack of options for his future. Life is hard enough without a system stacking the deck against you.

In this country, politicians often say that the answer to escaping poverty is “education.” The details are always left a little vague, though. “Better schools” — better how? “Better teachers” — what would that entail? Although it’s set in 1980s London, Education’s intimate story suggests the larger global problems at play. Everywhere, immigrant communities face cultural and economic obstacles that others simply don’t — “better schools” won’t quite fix that. But Education also examines the issues within this specific family that make it tough on Kingsley. Because he receives mixed messages from his parents — his dad especially seems to think that school is a waste of time — he’s too young to fully grasp what the consequences could be if he doesn’t address his illiteracy. That crushing sense of limited prospects — the belief that merely surviving is the best you can hope for — is a real weight on this family. How can Kingsley possibly break free of low expectations? 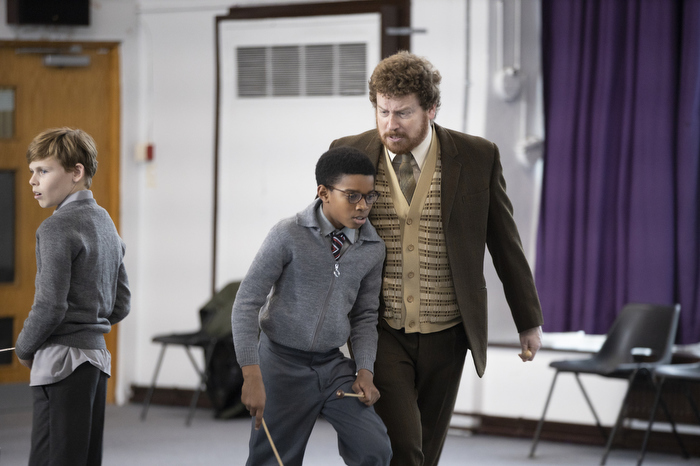 The five weeks spent watching the Small Axe anthology has yielded its share of deeply dispiriting moments as McQueen has repeatedly dramatized the unending, subtle impact that racism has on the films’ characters. For any white viewer, these movies will be sobering and illuminating. Quite often, the bigotry is so invisible, felt rather than seen, that anyone who doesn’t experience this harassment on a daily basis can start to understand how it lingers like a dark cloud over McQueen’s protagonists.

Kingsley is the youngest of Small Axe’s main characters, and Sandy plays him so innocently that you fear for what’s going to happen to this boy. I don’t think I’m spoiling anything by saying that Education has a (mostly) happy ending. But that juxtaposition between Kingsley’s circumstances and his aspirations ends up speaking to a larger point made throughout this anthology about the society it’s depicting.

As Kingsley looks up at the solar system’s many stars and planets, it underlines how tiny we are in the grand scheme of things. All those galaxies are a miracle — the fact that any of us are alive is another miracle — and yet we’re undone by our petty human failings and prejudices. Kingsley wants to be out there among the constellations — he wants to be able to dream that big. His situation, however, may leave him permanently grounded. His school is failing him. But how much are any of us doing to help him?