Do Astronauts Jerk Off in Space?

We asked a former NASA physician, and even got the notoriously tight-lipped space administration themselves to shed a little light on the matter

“While we expect our employees to behave in a professional manner at all times, their personal lives are their own unless it begins to directly affect their job performance.”

This was the official statement I received from NASA’s media relations team at Johnson Space Center, following a handful of politely persistent emails on the subject of whether astronauts masturbate in space. While it’s hardly the Neil Armstrong dick pics I was hoping to get, it’s still surprisingly forthcoming for the notoriously conservative NASA — it seems, in fact, to be about as direct as they’ve ever been on the subject, since they normally ignore or flatly rebuff any media questions on sex or sexuality. (“I’m amazed that they acknowledged this at all,” a physician who’s worked with NASA tells me.)

I attempted to follow up with Colonel Mullane on just what he did with those kryptonite-drilling boners, but he politely declined my request for elaboration. With that, we’re left to infer that either he did masturbate, or that his erection quickly withered away, which would also be understandable. As he said in the Men’s Health interview, “In my case, you have so much immediately flooding your mind — Oh my God, I’m going to be doing a robot arm operation where I’ve got a billion-dollar satellite and I’d better not fuck this up. Believe me, if you want something that’s going to wilt your hard-on, start thinking about that.”

These accounts directly contradict the old notion that the inquisitive redditor above cites — i.e., that you can’t get an erection in space. We — of course — have touched on this before, but the basic idea is that, in the absence of gravity, there’s less blood flow to your lower half. Additionally, testosterone levels seem to decrease in space for yet-to-be-determined reasons, both of which make getting a hard-on possibly tougher in space but, as Mullane and Garan made clear, certainly not impossible.

This also explains why Russian spacecraft include porn among their essential items for space travel. While NASA has been silent on this subject and former NASA astronauts have only acknowledged the existence of space erections, former Soviet cosmonauts have been a bit more revealing: In particular, retired cosmonaut Valeri Polyakov once recorded in his diary, “Psychological Support Service sent us some nice, ‘colorful’ movies which help to recover our will, to act like a normal adult male. There is nothing to be ashamed of.” Polyakov also wrote that his superiors suggested that he pack an inflatable sex doll for his record-breaking 14 solo months aboard the Mir space station, though he wrote that he “strongly opposed such a solution. A person who is using such things may develop so-called ‘doll syndrome’ or, in other words, start preferring the doll to their own spouse or loved one, even after they return to Earth.”

As for what those possibilities are, I reached out to a physician who’s worked with NASA, who agreed to speculate on this subject under the condition of anonymity (which is unsurprising considering, as we’ve already covered, NASA’s somewhat prudish approach to the topic).

The only major question remaining is where, as anything involving space living is known to be quite cramped. My NASA physician says that this will vary depending upon if the astronaut were aboard the International Space Station (“ISS”) or the now-retired space shuttles. For the ISS, “The sleeping quarters are a little bit smaller than a phone booth,” the physician explains. In there, the astronauts have a sleeping bag attached to a wall and a door without a window, though some do have a window looking out. They also have a computer in there, which they can use to contact their families and possibly look at porn, though the physician didn’t know if they had unfettered access to the internet, or if NASA checked their search history. While it’s small, there’s certainly enough room in the sleeping quarters to get one’s business done, which presents one possibility within the ISS. 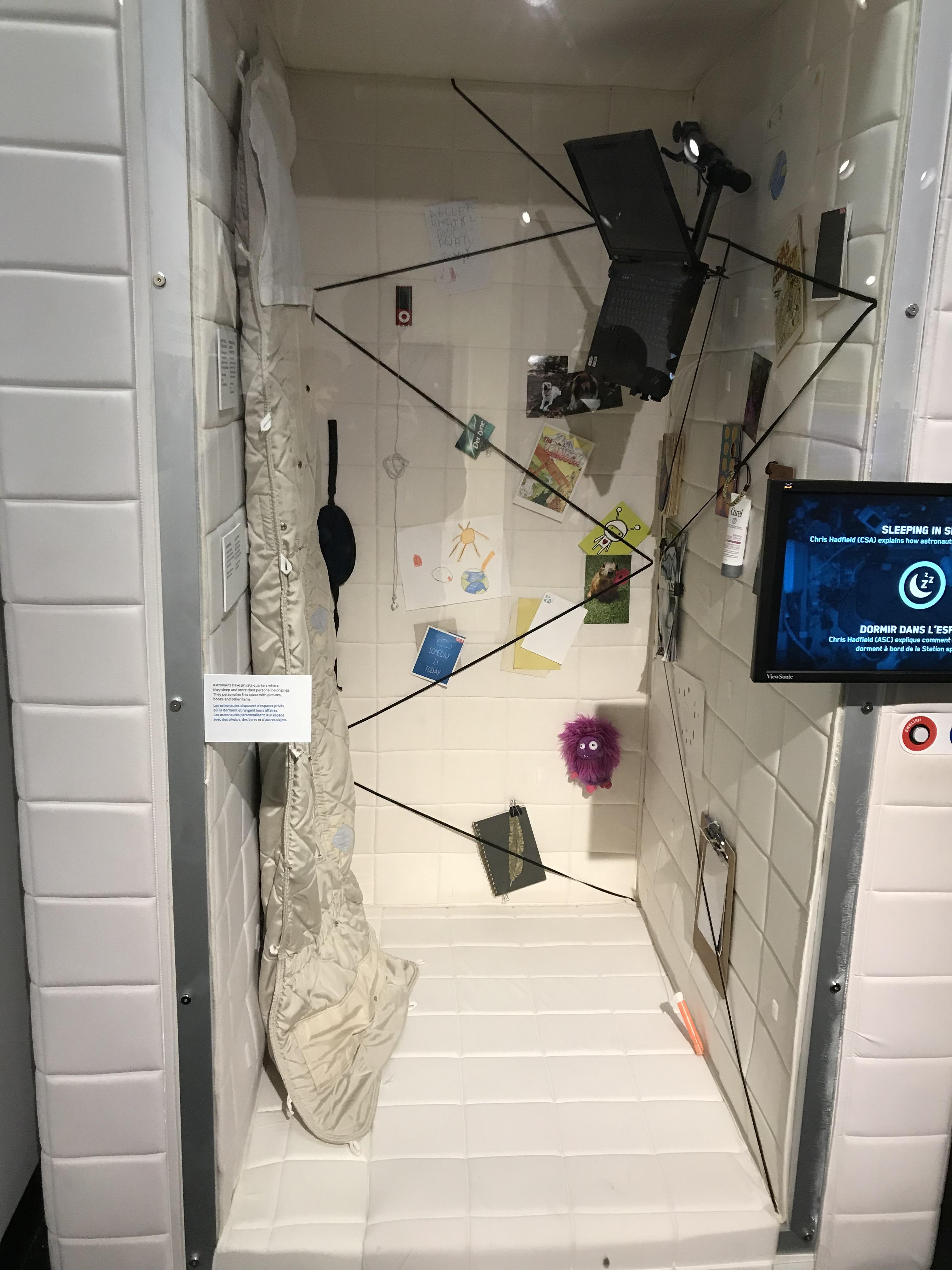 The bathroom on the ISS presents another possible place to rub one out, as there’s a door to allow for privacy. One might even feel tempted to see how the pee-vacuum feels down there.

So there’s enough room on the ISS for an astronaut to have a successful launch sequence, but what about the shuttles? Well, the physician says, “On the shuttles, there were no such sleeping quarters, as some people would sleep on the flight deck and others would sleep on the mid deck, and they’d velcro their sleeping bags to the wall.” As for the bathroom, early Apollo missions and the like had people poop and pee in bags while everyone turned their heads. Later shuttles did have a toilet, though it wasn’t terribly private. “You went into this little cubicle and you could close the door behind you, but the roof was such that you had to pull a curtain down a little bit to give you some privacy from the flight deck,” the physician says. So someone could have masturbated in there, but they’d probably have to keep the noise to a minimum if they didn’t want everyone else to know what they were doing.

People knowing what an astronaut was up to may not have been a big deal, though, as the physician says that people often “look the other way” in situations like this. They offer the example of people in the military, who often need to take care of personal matters in front of others, who will simply ignore it when it happens. This dynamic might also explain what happened in the Apollo days where really no privacy was afforded, thanks to a lack of a bathroom and people sleeping in shared spaces. “In those cases, either explicit or tacit agreements have been made amongst the crew as to what will be politely ignored.” In other words, the crew would likely come to an agreement, either spoken or unspoken, as to which circumstances (time, location, etc.) would be acceptable for pleasuring themselves.

“There is proof that astronauts can get involved with each other on Earth, and I believe it would be naive to assume it couldn’t happen up there,” the physician says. Unsurprisingly, the question of whether or not there’s ever been sex in space has been asked many times — particularly of astronauts Mark Lee and Jan Davis, so far the only married couple to fly together — but whether or not it’s ever actually happened has been universally denied by astronauts and NASA alike.