A WWII Historian Explains the Dark History of Pixar’s ‘Cars’

The presence of a WWII Jeep named Sarge has left fans scratching their heads. So let’s settle this: How did the war play out in the ‘Cars’ universe?

There are a lot of weird, unexplainable things going on in Pixar’s Cars universe. Like, are there humans around, or were there ever? If not, who built the cars and why do they have door handles? Do the cars reproduce? And if so, how?

One of the most complicated things about Cars, however, is the existence of the character Sarge, who Disney officially describes as follows: “Sarge, a 1942 WW2 Willys Army Jeep, is the most patriotic resident of Radiator Springs.” 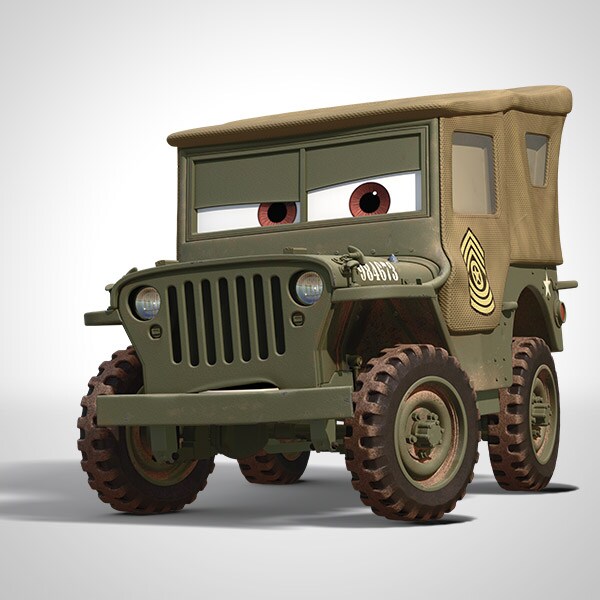 So, according to Disney, Sarge is officially a World War II Jeep, which means that World War II officially took place within the Cars continuity. With that alone, there’s a ton to unpack. For example, what did the battles look like? Who won the war? What weapons did they use, and how did they fire them? And perhaps most interestingly, what kind of cars were all of the war’s major historical figures?

Fortunately, I found a World War II historian who was willing to play along — Paul Woodadge, a filmmaker, author and battlefield tour guide — and map out all of this with me.

Who Would Be What in the Cars Version of World War II?

Winston Churchill as a Spitfire Fighter Plane. For the leader of Great Britain, Woodadge makes a case for the Spitfire, not only because Churchill was known as a spitfire himself, but because “it would have to have been something that the British people could look up to,” he tells me. “With the Spitfire, there were campaigns in Britain where the people were encouraged to give their old frying pans to be melted down to make Spitfires. Actually, you can’t make Spitfires out of old frying pans, but it was a successful PR stunt that inspired many. That is what Churchill was about as well — his image was that he was one of the people and that the people brought him to power.”

Franklin Roosevelt as a Lincoln K-Series. The Lincoln K-Series was in many ways the first “presidential car,” and FDR had one nicknamed the “Sunshine Special.” Roosevelt was an elite, so a luxury car makes sense, yet Woodadge points out that he was also perceived as being accessible to the people, so a convertible made by Ford — the most “American” of American manufacturers — would suit him well.

Stalin as a Russian T35 Tank. “The Russian T35 tank was a very industrial, ugly-looking, brutish tank that came out of Stalin’s factories, which is why it would be right for him,” Woodadge says. “Stalin would have to be something oppressive that showed he had power and that nothing could touch him.”

Mussolini as an Isotta Fraschini Tipo 8. “Mussolini would have to be some flashy Italian car that was underpowered and ultimately unreliable,” Woodadge says. “He was something that looked good that wasn’t.” After a bit of research, I decided on the long defunct Italian luxury brand Isotta Fraschini, which disbanded shortly after the war and was never quite as well built as a Lamborghini or Ferrari. Hitler as a Volkswagen Beetle. “The idea behind the Volkswagen Beetle was that it was Hitler’s car for the people,” explains Woodadge. “It was a Nazi idea to have an economical car for his Reich, and that’s where the Beetle came from. The Beetle was his thing. It’s also the perfect irony that the Beetle became associated with hippies and free love. Hitler would have hated that, so it’s sort of a nice revenge.”

To round out the American cars, Woodadge thinks Eisenhower would have been a Jeep, as Eisenhower transitioned well from a general to a president who pushed for the Interstate Highway System. For President Harry Truman, I say he would be a Tucker, a forward-focused car for a president who defined a new, post-war age. The Tucker would also end up embroiled in controversy, much like our 33rd president.

“Neville Chamberlain would be a very specific 1928 Morris Minor,” Woodadge says, explaining that the elitist, outdated car is a perfect fit for Great Britain’s first, failed leader during the war. Emperor Hirohito of Japan, meanwhile, would likely be a Mitsubishi Zero, the famous Japanese dive bomber, which allows Hirohito, who was considered a god, to fly high above his people. Finally, the French resistance leader Charles de Gaulle would be a Citroën Avant, as “this was the car resistance leaders always drove in war movies.”

On the War Itself

During the real World War II, we parachuted in tanks and the like, so in some respects, the Cars war might have looked similar to our own. The only difference would be that all the vehicles would be talking and at least one would be voiced by John Ratzenberger. The cars would likely ram into each other as the tanks fired their cannons, but Woodadge says that he believes, had we all been cars, the Allied powers may have lost the war.

“One of the reasons that the Germans lost was that they needed to win a swift war,” he explains. “They needed the 1940 takeover of Europe to go quickly, so that everyone pretty much rolled over. What happened, though, was that the war ground to a halt.” This allowed the Allies to get reinforcements, which the Germans had far less of. However, had we all been automobiles, that initial takeover might have held. “At the beginning of the war, the German equipment was pretty much better than all of the stuff the Allies had,” Woodadge continues. “The German tanks, aircraft, submarines and battleships — most of that was better. Now, if you’re giving those bits of equipment sentience, you’re giving them an increased ability. For example, the Tiger tank the Germans had was superior to the Allied Sherman tank, but the Tiger tank was notoriously difficult to maintain. If the Tiger tank had intelligence, though, it could diagnose itself quicker, making it easier to repair.”

Along those lines, Woodadge points out another possibility, too: That the German vehicles would also have been far more intelligent than their Allied opponents. To back his theory up, he points to Mater, the moronic tow truck in Cars played by Larry the Cable Guy. “Mater is the crappiest vehicle, and he’s also a bit thick,” Woodadge says. “Does that then imply that there’s a direct connection between the sophistication of the vehicle and the intelligence of the vehicle? If so, the Germans would have had a huge advantage because their machinery, particularly early on, was far more sophisticated.” 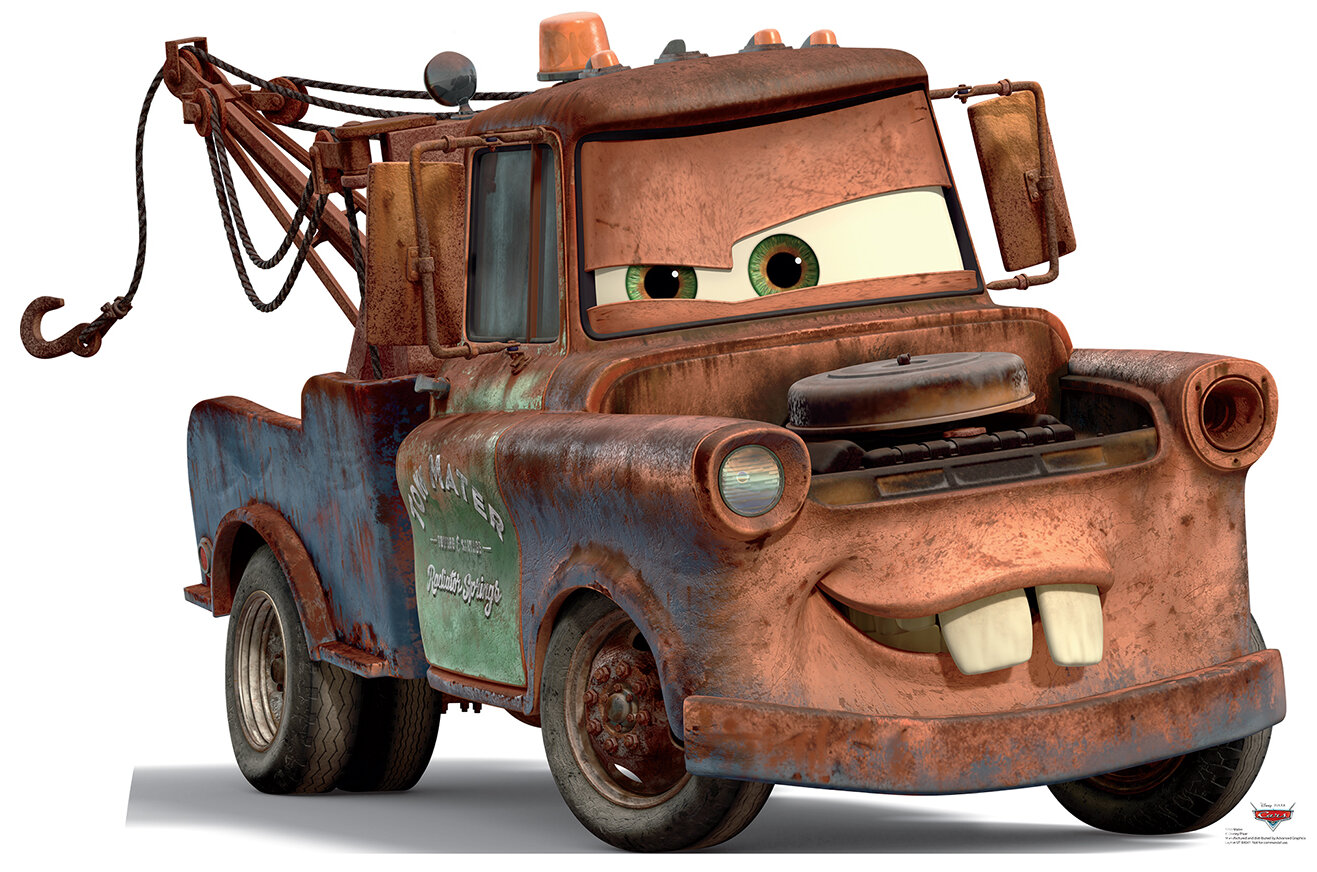 “Wars are won by fine margins,” Woodadge continues. “We British were dying on our asses the first three years — we nearly lost the war many times. So if the Germans had an advantage early on, maybe they would have won the war.”

Of course, such a dismal scenario would never be acknowledged by Pixar in an official capacity, but a rather influential voice in that world has more than hinted at the possibility of another very dark outcome. In 2017, Cars creative director Jay Ward was asked by someone at Screencrush who built the cars in his films, to which Ward answered, “If you think about this, we have autonomous car technology coming in right now. It’s getting to the point where you can sit back in the car and it drives itself. Imagine in the near-future when the cars keep getting smarter and smarter and after one day they just go, ‘Why do we need human beings anymore? They’re just slowing us down. It’s just extra weight, let’s get rid of them.’ But the car takes on the personality of the last person who drove it. Whoa. There you go.”

Still, like anything with the Cars universe, there remain unanswered questions. For example, if the Germans won the war, is the U.S. and/or U.K. under German control in the films? And why then are there even American cars in it? Shouldn’t every character be either a BMW, Mercedes or Volkswagen?

These questions, and countless others, can never be answered, of course, as all of this is just idle speculation. The only thing that we can confirm is that, because Sarge exists, there was definitely a World War II in the Cars continuity, and that Churchill unquestionably would have been a Spitfire Fighter Plane.