Why Dads Become Absolute Dads About the A/C

I may be literally sweating on my keyboard, but it’ll all be worth it when my bill is six dollars lower at the end of the month

Right after the birth of his son, Tony Forde felt something click. It wasn’t necessarily the cosmic shift in perspective that comes with becoming a parent, nor was it only the fact that he’d helped bring new life into the world. It was something else.

“Seventy-two degrees. That’s the correct answer!” insists the 33-year-old. “The A/C should be set at 72 degrees, and leave the setting on cool — none of this econ bullshit — and the fan on low. If you need the fan on high, then, my friend, you’ve already lost.”

Why did it take becoming a dad to become such a dad about the room temperature? Forde isn’t entirely sure. But he “read somewhere” that between 68 and 72 is the optimal temperature for a baby, “and 72 is the only number that felt ‘right.’”

Forde elaborates on his A/C logic: “Anything in the 60s seems too cold for a baby, right? And I’m sure as shit not setting anything to 69 like I’m 13 years old. Seventy is kind of meh, though I have no basis for feeling this way, and 71 just makes it seem like you’re trying too hard to be unique and offbeat. So, 72. Nice, boring 72. Seems like a good dad temperature.”

That fatherly instinct to feel very strongly about the air conditioning setting isn’t unique to Forde. If anything, you know it’s a cultural phenomenon when the teens make SpongeBob memes about it: 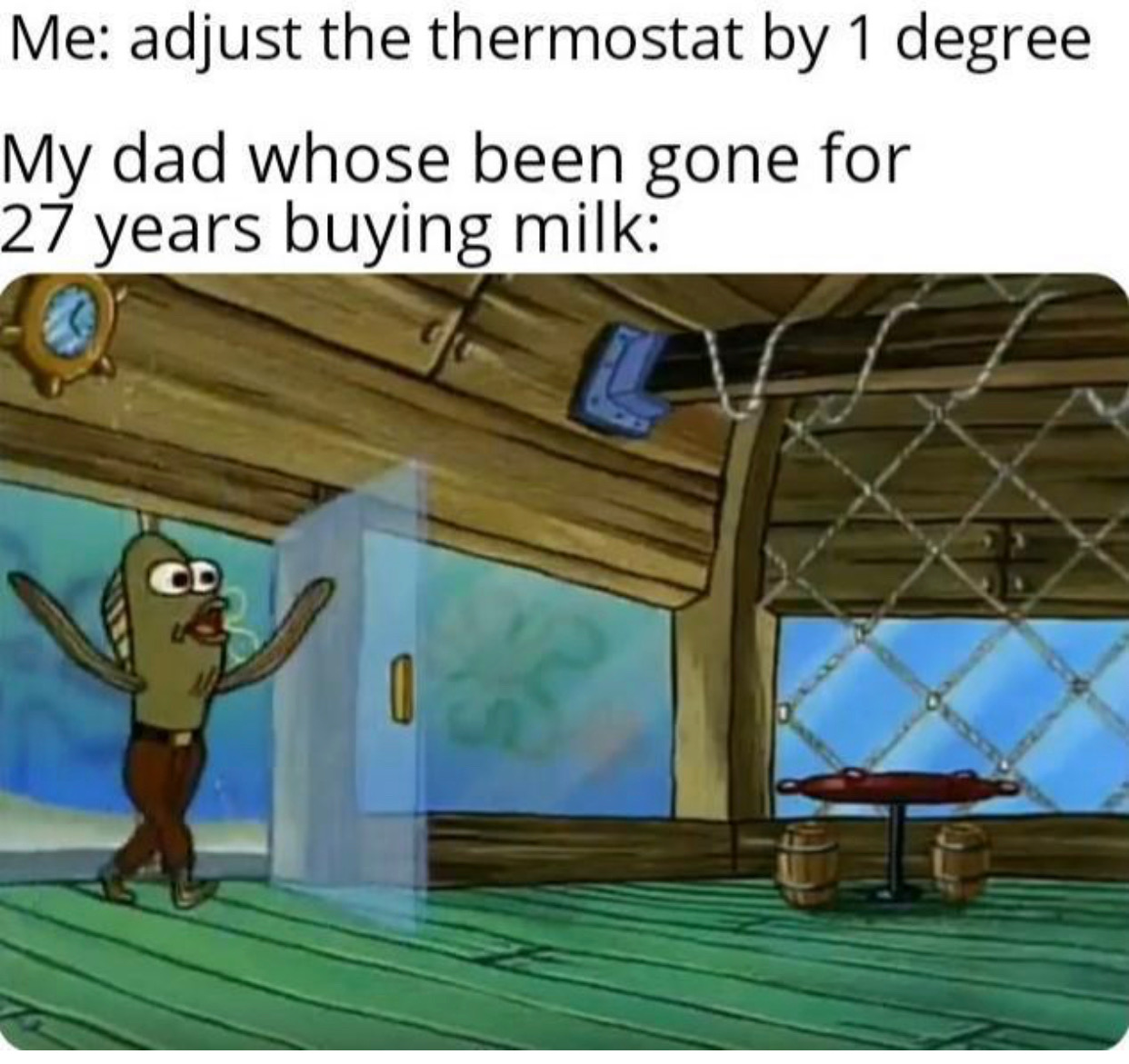 So what is it with dads and the central air? In the office, A/C settings tend to cater to male employees’ preferences over their female colleagues’, as the New York Times reported. Are the same dynamics at play in the home?

Yes and no. Claudia Luiz, a psychoanalyst in New York, says the behavior might have to do with something behavioral scientists refer to as “DBS,” or the dominant behavioral system. Luiz points to a review published in Psychological Bulletin, explaining that a man’s need to control the thermostat is related to psychopathology, “meaning that dominant behavior is narcissistic, aggressive, with a strong component of a need to control.”

According to feminist literature, Luiz explains, the family unit comprises dominant and submissive forces, “with the dominant person trying to control the family environment, whether it’s the temperature in the room, finances, vacations or all other major decisions.”

Simply put, even when people imagine a generic dad, “most of us carry within us the image of a man with a remote control in his hand, with a woman sitting next to him. … He has the controls, and this is still just a part of very basic gender inequality and/or gender roles.” 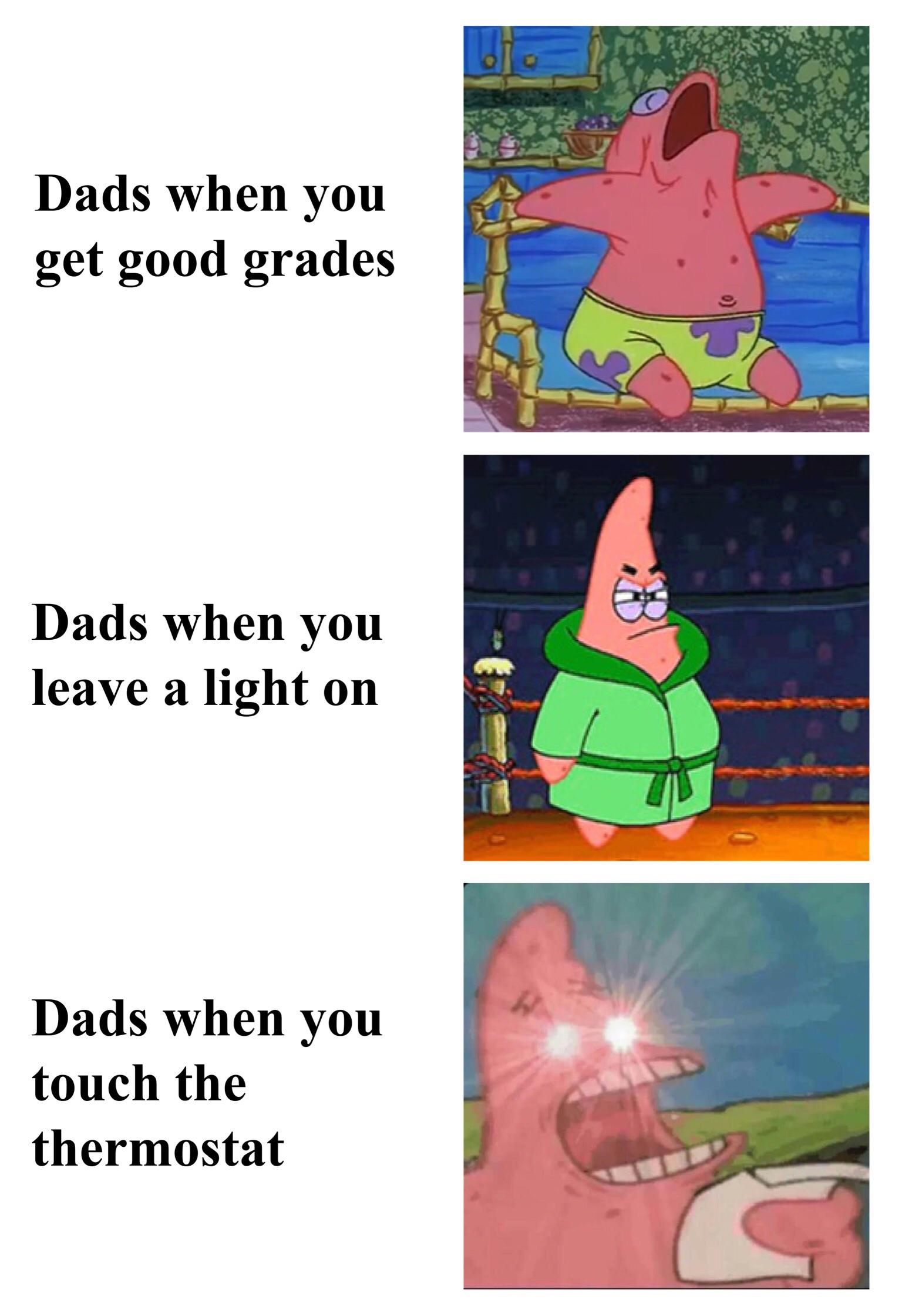 Of course, this theory won’t apply to all modern families, whose varied interpretations of gender roles “don’t necessarily point to pathology, sexism or excess of dominance and submission,” Luiz points out.

“Many loving couples can accept areas of dominance in each other,” she adds. “Maybe the man wants to control keeping the thermostat down, but the woman wants to control how the children are spoken to or how they are fed. … This is a negotiation, where everybody learns how to be comfortable with a little give-and-take in the family.”

So maybe Dad is trying to exert absolute control — or maybe he’s just trying to lower the bills. “You have to look under the hood a little bit to really know what’s going on,” Luiz says.

So, let’s look under the hood, shall we? I asked four dads to explain their A/C settings — and why they matter so much.

72 degrees | Mike Robinson, father of two, California
“I’m a father of two autistic kids,” says Robinson, a 53-year-old in Santa Barbara. “I’ve got one who’s very active running in and out of the house, and another who also has epilepsy.” Robinson himself is epileptic.

Where things get dangerous is that seizures can be triggered by changes in temperature. “So, what I like, and what epilepsy likes, is to keep the house a continual norm of under 75,” Robinson says. With young kids always running in and out of his house, that setting can be hard to maintain — especially in Santa Barbara, where “the house can get into the 80s inside, which poses a danger. … Sometimes it’s about much more than just feeling comfortable.”

68 degrees | Nathan Ripley, father of one, California
Ripley keeps his house at a frigid 68 degrees under the hot San Diego sun. Until he had a family, he’d keep it even lower, but as he and his family grew, he “realized that might not have been such a good idea,” he tells MEL.

“It took me a lot of experimentation and debates with friends, [but] 68 [degrees] is not too cold. [It] maintains that comfortable temperature. You won’t suddenly feel cold in summer clothing like shorts and T-shirts.”

But beyond personal comfort when coming inside on a hot day, Ripley says, “most importantly, it’s safe for kids. They won’t easily get a fever or a cold if they’re in that kind of environment. At least not from the temperature.”

Ripley is most likely following the logic that cold temperatures can make people sick, but does the same apply inside the house? I ran this theory by Dr. David Westenberg, who goes by “the Germ Juggler” on Twitter. He says that while warmer temperatures can impact the growth rate of bacteria — the warmer the temperature, the faster they will divide or grow — he “cannot envision any significant health benefits or detriments of a particular temperature in our homes.”

The Capitalistic Hierarchy of Needs

68 degrees | Gary Pettit, father of one, Maryland
“A/C temp can be a nightmare of a conversation,” Gary Pettit, a 35-year-old dad, tells MEL. “You have to balance the electric cost, the comfort level of multiple individuals with individual preferences and the size and shape of the house,” Pettit explains — which is why he approached the A/C with literal science to keep the electric cost down and everyone comfortable.

Pettit, who calls himself a very data-driven person, took it upon himself to perfect the air conditioning system in his house. First, he bought and installed small thermometers throughout the home to perfect the right A/C settings and schedule.

“They were about $5 on Amazon,” he explains. “I kept putting them in different rooms and would check the temp when I came home, when I got up, sometimes during the day on a weekend. It sounds like a lot, but it really only took two seconds to glance at a thermometer when I walked by with a load of laundry.

But Pettit’s formula isn’t done yet. He has to account for neighbors, how much sunlight outside-facing walls get and the ebb and flow of the entire HVAC system.

“Since the air conditioner is the lowest level, the cold air has to be pushed up three floors before it even reaches the baby’s bedroom, which is on the south side of the house, which happens to be the wall that gets the most sun.” So, in order to maximize the natural cooling of the building even more, he’s taken to covering multiple vents. “You know that plastic window covering you can buy to seal windows in the winter? I bought that and put it over the vents in the basement and the bathrooms — there’s very little reason to air condition a bathroom that almost always has its doors closed, so I sealed those vents as well, which helps push the cold air from the basement up to the upper levels and bedrooms.”

The U.S. Department of Energy suggests raising the temperature seven to 10 degrees during the day when no one is home in order to save money and energy. Pettit takes this a step further and shuts his air conditioning completely off.

To screw with Pettit’s finely tuned and timed HVAC system would be to throw a chainsaw inside an expertly tuned piano.

Alex Ribbentrop, a psychotherapist in Florida, finds such exchanges in comfort for saving money as an interesting fold in the human psyche. “The degree to which we will accept physical discomfort for the sake of saving on a monthly expense tells us is that there is a hierarchy of importance and value at play,” he explains.

“Given the option of being slightly too hot or slightly too cold vs. saving money, many will choose to save money. From this we can gather that although our short-term comfort is potentially jeopardized, there is a great value to the economic payoff at the end of the month.”

In other words, as I sit here literally sweating on my keyboard because it’s 71 in Chicago today, it’ll all be worth it when my bill is six dollars lower at the end of the month.

Thermal Regulation and the Evolution of Man

Ribbentrop also explains that controlling the A/C could be an extension of “thermal regulation,” and thus could perhaps be explained from an evolutionary perspective.

“Temperature control as a whole … has been of critical importance,” he says. “In fact, being able to start and manage fire as a means of thermal regulation is arguably one of the most important of human achievement, in part because it allowed us to expand our territory and range of travel regardless of temperature change.”

So, Ribbentrop continues, “when one goes to change the temperature on the HVAC, we can connect this to our ancestors huddled around a fire to keep warm or seeking out fresh clear water and shade to cool off.”

Beyond financial restraint and children’s health, some guys just think it’s all part of being a dad. Take it from Tony Forde, who calls himself a “bona fide New Dad™.”

“There’s absolutely a number of arguments to be made in favor of auto/econ settings (power conservation, the environment, etc.), but I’ve convinced myself that newer units are more energy-efficient anyway,” Forde says. “Also, I can’t stress this enough, I don’t want to change the volume on my TV every time the A/C kicks on.

Overall, though, Forde says he’s a “a big fan of the ‘stereotypical dad’ things” that he is now allowed to “really lean into.” He’s not dreading the day his son is old enough to mess with the dial; in fact, he’s “really looking forward to getting fake mad about it… like totally blowing my stack. ‘Do you know how much it costs to keep this house cool?!’

“I can’t wait,” Forde concludes. “Maybe I’ll move the dial a few feet lower so he can start messing with it even sooner.”