They’re recording every little detail in logs, spreadsheets and charts like deranged scientists on the path to the Nobel fap prize

Well, as Bryce, a 29-year-old in L.A. who started tracking his “jack habits” two weeks ago, counters, “Why the hell not?”

“I honestly thought it would be an interesting little snapshot into the sexual mindset during a very volatile moment in history,” he says before sending me an Excel spreadsheet containing the lurid details of his week-long lockdown cumfest. “Quarantine horniness is a real thing and I’ve got the time for a personal project, so I figured it would be a fun little experiment.”

When asked whether any of this affected his penile spirit, he points to the data. Though he masturbated once or twice during those days, the state of the world really did get him down and he became more interested in headlines than handjobs. “Stoned, but starting to feel the quarantine paranoia kick in,” he wrote on the 15th. “Want to escape for a bit, thinking of my yoga instructor who I definitely have a crush on.” On the 16th, he wrote that the anxiety was starting to wear on him. An earnest but unfulfilling midday session was all he could muster.

On those days, and for the majority of the week, jacking off was like a panic blanket — something to calm him down or get his mind off what felt to him as an increasingly chaotic and unorganized response to a rapidly spreading disease. “My numbers are dwindling,” his entry on the 17th reads. “I now appear to be jacking simply to survive.”

Beyond Bryce, other people have followed suit with their own masturbation-tracking methods. Erica, a 30-year-old in Denver, has been studying hers with the keen eye of an armchair scientist and the graphing abilities of a slightly more advanced armchair scientist. 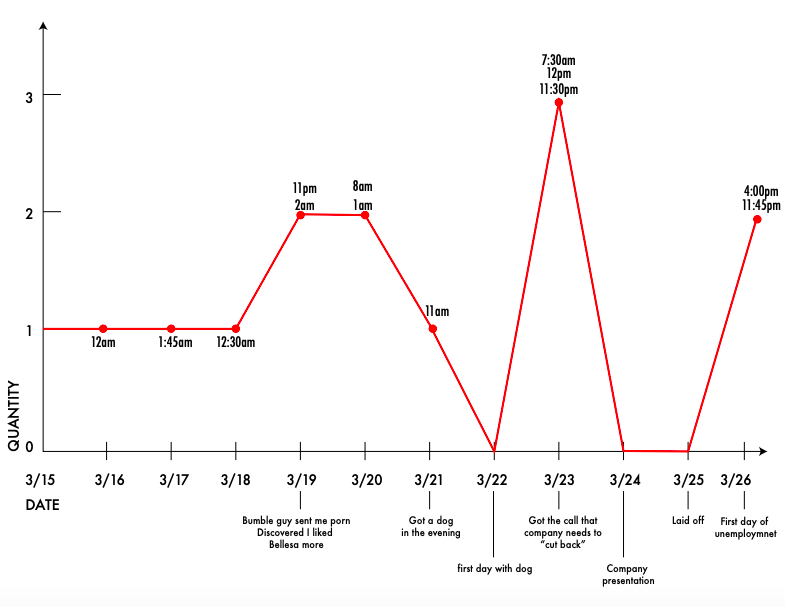 Interestingly, her most mastubatory day was the day her company told her it would be “cutting back” on staff. “We got the ‘talk’ on Monday, and were then told we’d know who would be let go in two more days,” she tells me. “The anxiety of not knowing what was next made me resort to self-soothing tools like walking, cuddling with the dog, and of course, getting off.”

When she found out she’d been laid off the following Thursday, she was too distraught to masturbate at all, but the next day, she was back in the saddle with two curiously strong orgasms she suspects had something to do with the sudden freedom and time off. “I’ve been learning that this is a really positive tool to help cope with uncertainty and anxiety,” she says. “The more time I have and the more comfortable I feel, the harder I come. If I have the time and patience for edging, that shit is next-level.” Though, no amount of uncertainty and anxiety could suppress her urges — only getting a dog midway throughout her data collection could accomplish that: 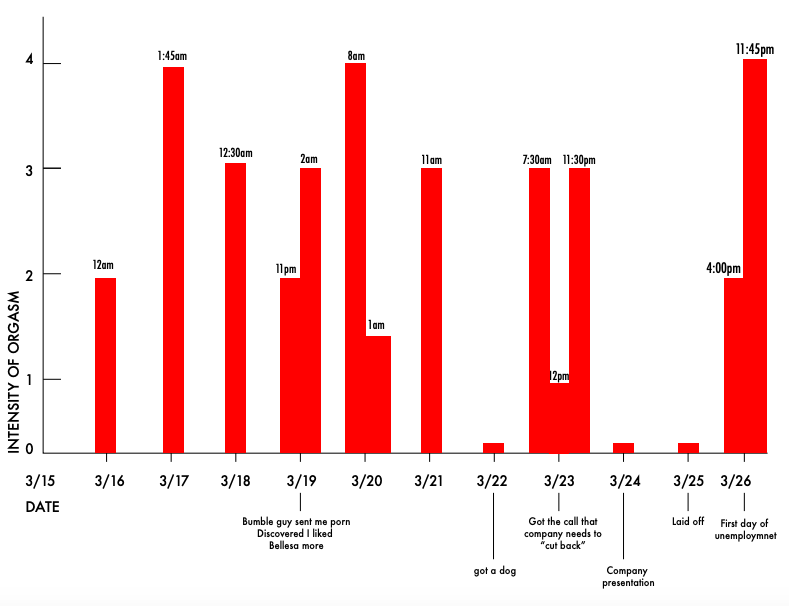 Meanwhile, it’s not orgasmic soothing Mario is after, it’s comedic relief. The 41-year-old bisexual is currently on lockdown in New York City, and he’s using the amount of “me time” he’s had while working from home to document the bizarre inner workings of his own mind for no reason other than because he “thinks it’s funny.”

“I kept noticing that my thoughts would drift from what I was fantasizing about to something horrifically disturbing or morbid,” he says. “But somehow, I’m able to simultaneously wring my hands about dying and wring my penis at the same time. It’s actually pretty entertaining to see what I’m thinking about, to be honest.”

Curious about why his mind wandered to such dark places — and badly in need of a homebound hobby — he started taking notes about what kind of fucked-up scenarios it crafted during what he describes as “the most strangest and most pivotal time in recent history.” 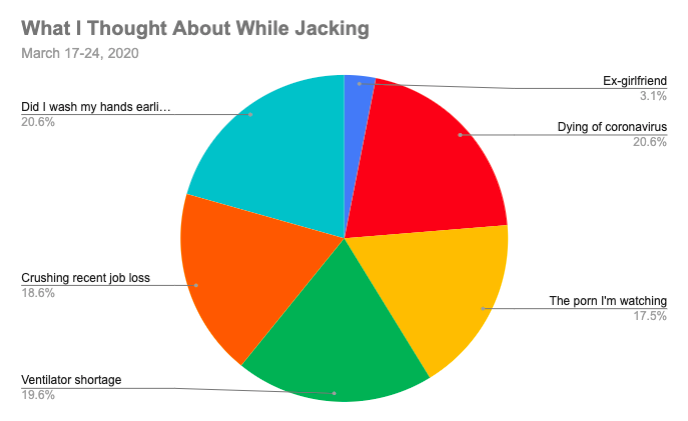 With corona as his new constant companion, it’s no surprise that his libido has sidled up next to it in his mind. The two are, as he says, “going around, hand-in-hand,” and as a result, he’s discovered he’s been getting erections during activities that normally would have squashed his sex drive had they not become so “disturbingly normal.” 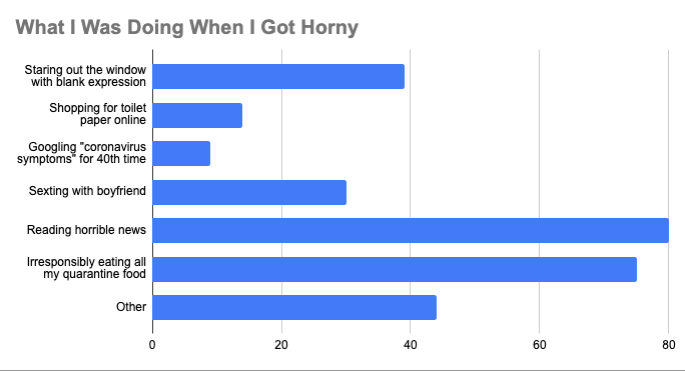 But while Bryce and Erica both reported rolling increases and decreases in their libido as the week progressed, Mario says that, despite “all the mental, emotional and physical shit” he’s dealing with right now, there was no statistically significant difference in his jack-off patterns before and after the pandemic hit. “Nothing has changed for me,” says Mario. “I’m actually really surprised that my penis is like this.”

So, what can be learned here? A meta-analysis of their collective data (by me) conducted in a highly specialized laboratory (my living room) reveals the following trends:

But despite the great strides in science that research like this brings, none of the jack trackers reported particularly enjoying their data collection. “It gave me no comfort, and was somewhat annoying to do,” says Bryce, who promptly stopped after turning in his report. Likewise, he doesn’t think it’s something other people should necessarily take on with their generous quarantine free time unless they’re already into that kind of thing.

He did, however, learn something: “I learned that even in times of extreme duress and stress, there are some urges you just can’t repress. I think people gotta jack. Everyone is gonna be so stressed out. We’ll need to release that tension, or we may run into even more problems as a society down the road.”

“It won’t ‘single, or double-handedly’ keep us all sane,” he continues, “but it may be an important function along the way.”