In ‘Coming 2 America,’ Prince Akeem Is Back but Eddie Murphy Isn’t

Thirty-three years later, the superstar revisits one of his most beloved characters — only to forget what made him so special

It’s a fun dorm-room debate: What would so-and-so character be like when he got older? No doubt there’s been plenty of fan-fiction written about Christian and Ana as middle-aged suburbanites or Peter Parker as a senior citizen — we enjoy extrapolating into the future, imagining what “happily ever after” looks like for iconic fictional figures after the movie is over. It’s the same reason why we obsess over minutiae like whether Tony Soprano would have voted for Donald Trump: These characters become so real to us that they don’t stop existing simply because their story did.

In theory, this should be one of the appeals of Coming 2 America, which takes place about 30 years after the events of Coming to America. You probably remember the original. Akeem was one of Eddie Murphy’s most endearing creations — a sweet, guileless African prince who didn’t want to settle for an arranged marriage and, instead, took off to the magical land of the United States of America to find a soul mate. Where other Murphy characters were smartasses or streetwise, Akeem embodied the same unbridled enthusiasm that he brought to his classic stand-up routine about a kid’s excitement for the ice-cream man. Akeem wooed Lisa (Shari Headley) the same way he wooed audiences. Despite all his wealth and power, Akeem was a good guy. You wanted the best for him. Maybe you wondered what he’s been up to since 1988.

There probably wasn’t much reason to be optimistic about Coming 2 America — long-after-the-fact sequels rarely pay off — but a major disappointment is how it envisions Akeem since we last saw him. Don’t worry, he and Lisa are still together, and they have three adorable daughters. But the film is very much about how Akeem, despite trying to be an enlightened 21st-century husband and father, is stuck in old ways of thinking. A better movie would try to explore that in meaningful ways — or at least wring some laughs from the setup. Instead, Coming 2 America is mostly the story of how Eddie Murphy managed to cash a big paycheck while forgetting what made Akeem so fun in the first place.

When I read Coming 2 America’s synopsis a few weeks ago, I started questioning my memory of the first film. Did I miss an important plot point? No, the filmmakers just concocted a terribly convoluted excuse for a sequel. In the new movie, Akeem is about to be named king, when he learns that he has a son — and that the baby was conceived when he was in America. But how did that happen? It’s a sign of Coming 2 America’s slack execution that director Craig Brewer and the film’s four credited writers invent an implausible scenario in which, one night during their trip, Semmi (Arsenio Hall), convinced a random woman at a bar, Mary (Leslie Jones), to hook up with Akeem. Because Akeem blacked out long before they ended up having sex, he has absolutely no memory of the night — but now, conveniently, he has a 30-year-old son in Queens named Lavelle (Jermaine Fowler) right when he must find a male heir to ensure his bloodline continues to rule the Zamundan kingdom.

In Coming to America, Akeem’s secret weapon was that practically nothing fazed him about America. The general meanness of Queens? He took it in stride. The menial job he signed up for at McDowell’s? As long as it let him be closer to Lisa, he didn’t care. Not unlike Ted Lasso, Akeem was a positive fellow, and even if he (and the movie) had some reductive views about women, you could at least say his heart was in the right place. Plus, it was just funny to see super-edgy Eddie Murphy play someone so naive and friendly. The joke was always that we knew that the “real” Murphy wasn’t like that — the contrast between kindly Akeem and the comic’s razor-sharp persona was both hilarious and touching.

But that was a long time ago. In recent years, Murphy has been plotting a bit of a comeback, receiving great reviews for 2019’s Dolemite Is My Name and hosting Saturday Night Live for the first time in decades. (He also has at least one Netflix stand-up special in the works, although COVID may have derailed those plans for now.) Yet despite reacquainting himself with Akeem’s accent for Coming 2 America, Murphy doesn’t really embody the character so much as he just dusts him off. The effect isn’t dissimilar to, say, Mike Myers and Dana Carvey pulling out their Wayne and Garth wigs for an Uber Eats Super Bowl ad earlier this year: You just notice how much older and less spry (and kinda desperate) the routine is now. 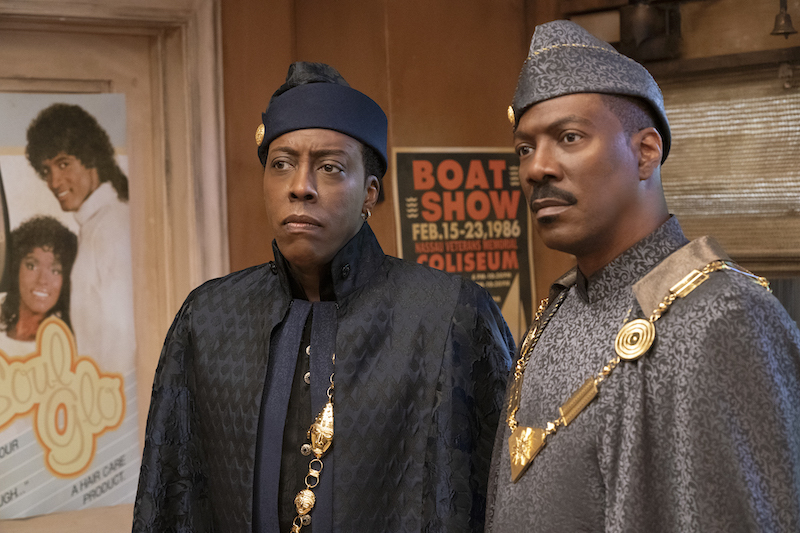 In theory, that reality could have worked to Coming 2 America’s benefit. The sequel focuses on Lavelle going through a series of physical and mental tests to be officially anointed as Akeem’s heir. (He also falls for the royal barber, played by Nomzamo Mbatha.) Meanwhile, Akeem is so worried about securing his kingdom that he neglects his wife and his daughters, who are disappointed that he’s choosing Lavelle over them. I was disappointed, too. It’s meant to be ironic that Akeem is following in his father’s (James Earl Jones) footsteps from the first film, so concerned about tradition that he doesn’t realize that, sometimes, what’s supposedly set in stone needs to change. (In Coming to America, it was the antiquated law that stated Akeem had to go through with his arranged marriage. In the new film, it’s that only men are allowed to take the throne in Zamunda.) But for all of Murphy’s comedic genius, he’s only rarely demonstrated an ability to show a lot of emotional nuance, and as a result Akeem comes across as a bit of a dullard who, eventually, will figure out that he’s not keeping up with the times. Actually, maybe it’s not Akeem who’s unengaging — maybe it’s that Murphy isn’t trying that hard.

The trouble with long-after-the-fact sequels is that audiences are so familiar with the original movie — its every element absorbed into the cultural bloodstream — that the filmmakers have an even higher bar to clear to justify its existence. (You don’t want audiences’ reaction to be “We waited 33 years for this??!?”) But Coming 2 America hopes you won’t mind by simply repeating everything that’s in the first movie. (Even Louie Anderson shows up.) But jokes about McDowell’s or royal body cleaners or cranky Jewish geezers won’t cut it because, deep down, none of that was what made Coming to America good. It was Akeem’s charm, which of course was actually Murphy’s charm.

It’s also the one thing Coming 2 America can’t replicate. Akeem was more than a pop-culture reference or a visual cue. It was a superstar’s ebullient essence at the height of his Hollywood power. It was Murphy fully investing in a story he cared about. Akeem is back in Coming 2 America, but that Murphy isn’t. Maybe you’ve spent time over the last three decades pondering whatever became of that nutty African prince — or the man that brought him to such vivid life. If you did, I’d advise skipping the new movie. The answer will only depress you.