In 2012, to honor the legacy of the most disastrous nuclear power plant accident of all time, the subreddit r/Chernobyl was created. It was home to vintage photographs of Pripyat, Ukraine, the ghost city where radiated iodine rained from the sky in 1986, along with scientific discussions of how exactly a nuclear reactor could explode and wreak the havoc it did.

Then, in March, HBO premiered the miniseries Chernobyl, which chronicled the aftermath of the disaster, and the subreddit changed drastically. Teens discovered and hijacked the forum, filling it with memes mocking characters like Dyatlov (Paul Ritter), the power plant’s deputy chief engineer. Overnight, seven years’ worth of sentimental, analytical discussion on the subreddit (one typical thread: the unheralded hero who braved toxic water three times to shut down one of the plant’s radioactive pumps) was gone.

Many of the memes depict Chernobyl’s most horrific moments. But, these memers argue, they’re creating them not to mock the disaster but to try to process a horrific, unimaginable historical event and its gruesome cinematic retelling. (Some, though, are clearly there to shitpost.)

“You should be able to joke about anything,” argues Ari, a teen Chernobyl meme creator on Reddit who asked to remain anonymous. “Some people deal with trauma or grief through jokes or comedy, provided it isn’t with ill intent.” Two weeks ago, Ari was sitting in a high school class, joking with a friend about Dyatlov’s repeated denial that graphite from the RBMK reactior landed on the roof of the power plant building after the explosion. So, after class, Ari posted this:

Chernobyl memes predominantly exemplify “a larger theme in the show that a whole lot of characters who were government officials were in denial about how bad the situation really was,” says Kristoffer, a 24-year-old meme lover, in a Twitter DM.

It’s an instantly relatable setup, making Chernobyl memes allegories for today’s politics. When Dyatlov repeatedly yells “You didn’t see graphite on the ground because it’s not there!” just after footage shows a firefighter worker holding a graphite rod, it’s hard not to hear echoes of Donald Trump’s endless “fake news” refrain in response to things he actually said. “We could see this character clearly in denial or just absurdly conceited — they could never be wrong,” Kristoffer says.

In the series, Dyatlov is an ill-tempered villain who oversees the rushed safety test which resulted in the disaster. He repeatedly chastises his staff’s safety concerns even after the nuclear reactor blew up. While the real-life Dyatlov served three years in jail and died in 1995, the cinematic, widely arrogant Dyatlov now lives on in web culture, a symbol of government incompetence.

Kristoffer sums it up: “That character was so in denial about what was going on, he would just keep repeating nonsense — even after others, and us as viewers, clearly saw what was actually going on. And that’s what made it funny.”

The post he shared adapts the Annoyed Bird meme to feature a crow with a power plant cap representing Dylatov, yelling at another bird with a reddened face meant to depict the plant workers exposed to radiation. “The line in the meme ‘I need feedwater for my reactor core’ isn’t funny by itself and only makes sense in the context of the show,” Kristoffer says. “It really makes sense with what the meme pokes fun at.”

However well-intentioned, memes about a tragedy that killed thousands are not always appreciated. The subreddit’s moderator, vi_rus, certainly wasn’t pleased. “There has been a significant increase in memes and overall nonsense posts in the subreddit lately,” they wrote in a post on June 5th, two days after the season finale. “While, personally, I can appreciate ‘too-soon’-type dark humor, it is not something that all people understand or find funny.” The moderator added, “On the other hand, there are those that do seek out this type of content and have a sense of humor about it.”

“People lost their loved ones to it,” says Shathar, a 21-year-old Twitter user from Jordan. “To even think that they might come across a silly meme like this is absolutely heartbreaking.” Though the numbers are disputed, the United Nations predicted 4,000 deaths were caused by the effects of Chernobyl, including thyroid cancer. “I find [the memes] absolutely unconscionable, inhumane and disrespectful toward everyone involved in the tragedy,” they added.

A Twitter user by the name of WebSquirrel adamantly believes memes about Dyatlov or any of those responsible for the tragedy are inappropriate. They also lamented the “Chernobyl Influencers” allegedly taking selfies and planned candid photos in Pripyat.

“They’re on ‘hallowed ground’ taking semi-naked photos in a place of misery for those who were exiled.” These images have been the most controversial reaction to Chernobyl so far: Even actor Jared Harris, who plays Valery Legasov, called them “distasteful” on Larry King Now.

In actuality, as the Atlantic’s Taylor Lorenz wrote last week, the “Chernobyl influencer” is a flawed concept. In her article, “There’s Nothing Wrong With Posing for Photos at Chernobyl,” Lorenz talks to TruTV historian Natalie Shure about Pripyat photos on social media. Sharing images like this is akin to documentation, Shure argues. “Most people do it specifically because they want to remember the site and what it meant to them. Those goals are in line with those of public history projects, not antithetical to them.” (See also: the infamous Auschwitz selfie girl.) Moreover, the most widely mocked Chernobyl “infuencer” photo was actually taken in Novosibirsk, Russia, nearly 4,000 kilometers away from the disaster zone.

When I sent WebSquirrel Lorenz’s article defending the so-called Chernobyl influencers, he called me “desperate” and blocked me on Twitter. He changed his username first to “MEL Magazine is bad agenda driven journalism y’all” and then “MEL Magazine has a smelly bum bum.” 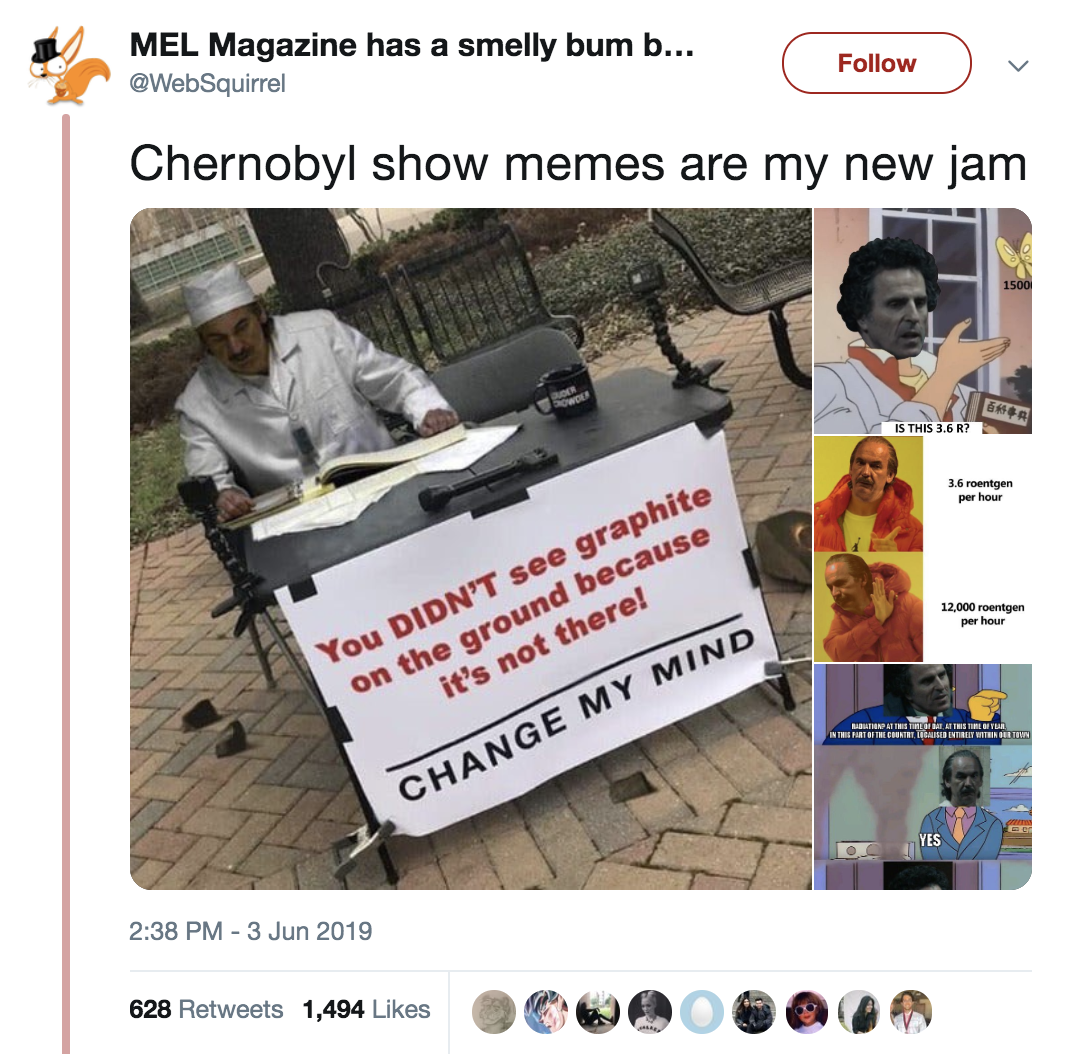 Not every Chernobyl meme is about the bombastic Dyatlov. There are plenty of radiation jokes, often featuring the gruesome physical effects of exposure to ionizing radiation, including reddening and burnt skin. 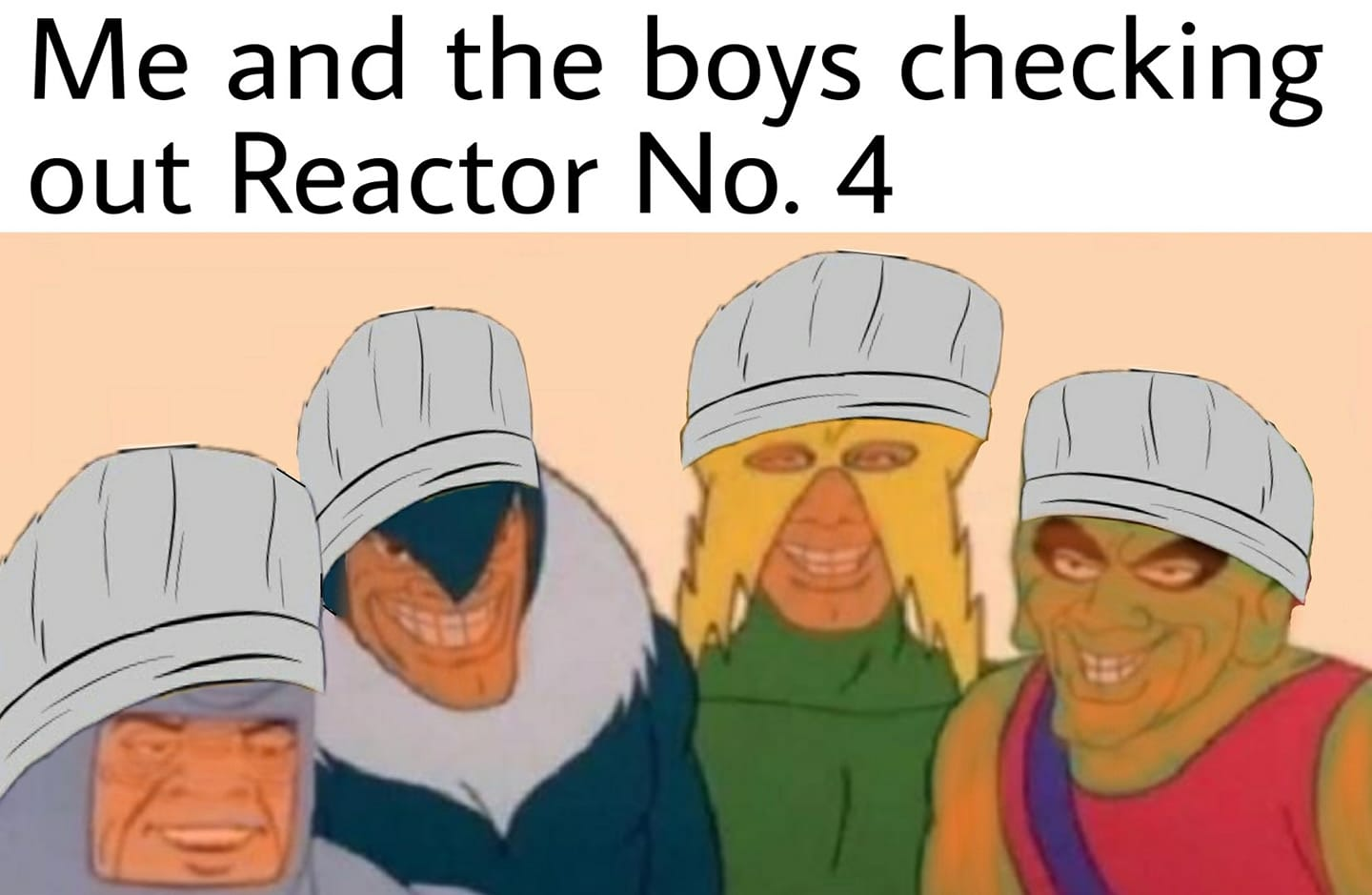 Marcin, an 18-year-old from Ireland who uses they/them pronouns, commented on a particularly egregious Reddit post to question the morality of the joke. The meme, a play on “Me and the Boys,” features four men in the caps worn by Chernobyl plant workers; it’s captioned, “Me and the boys checking out Reactor No. 4.”

Marcin, who joined the subreddit a year ago while considering a career in nuclear chemistry, has already watched Chernobyl twice, dissecting it in detail with their mother, who grew up in Poland and witnessed the aftermath of the disaster first-hand. Marcin doesn’t believe most redditors understand the weight of the tragedy. “I like memes. Don’t get me wrong,” they tell MEL. “But I’m not for poking fun at people who suffered immensely and selflessly gave their lives to stop a worse incident or who were sent to their doom by an incompetent superior officer.” 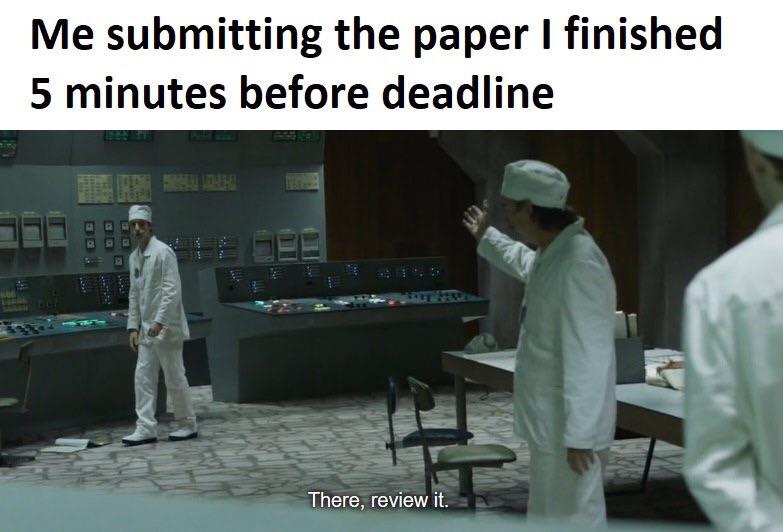 If there’s a middle ground in the Chernobyl meme debate, it has to do with intent. Chernobyl isn’t the first tragedy to get the meme treatment as Generation Z grapples with a history it was barely alive for. For example, “Bush Did 9/11” has become a well-trodden catchphrase to satirize both the president’s slow response to the terrorist attack and the flood of conspiracy theories that emerged afterward.

There’s a cyclical relationship between Chernobyl the show and the historical memes it keeps spawning: It’s organic social reach HBO can’t buy, and as horrifying as some of the content may be, it’s still keeping the memory of the tragedy alive, bringing a forgotten history to a new generation. Ari sums it up: “The jokes normally raise awareness of the disaster.”