The Men of ‘Bling Empire’ Prove You Can’t Buy Style

Lacking imagination or even a real personality, the show’s stars are a potent reminder that there’s nothing more boring than flash with no substance

Countess Luann said it first: “Money can’t buy you class. Elegance is learned, my friends.” This song echoed through my mind as I watched the men on Netflix’s recent hit, Bling Empire.

For those still unfamiliar, it’s a reality show set in pre-COVID L.A. whose premise is basically “Crazy Rich Asians, but in real life!” Cue the designer duds and massive parties for children too young to remember them. While the cast predictably features many women dripping in jewels and swanning about in gowns, the show’s core relationship is between two men. Kevin and Kane are the first characters we meet, and like everyone else on screen, they’re smitten with luxury.

In pop culture, rocking designer is a sign of success and, by extension, power and agency. Rappers wear Givenchy as a sign of their newfound agency, their financial flex in spite of a racist world. Often, the panache and swagger they bring to luxury (mixing it with “lowbrow” references, taking the opulence to rockstar-eque extremes) pushes fashion forward. But Kevin and Kane show little of that bounty-pushing spirit with their style, and their choices, while aspirationally sexy or expensive, don’t speak to anything beyond that — aside from being rich, they simply have nothing at all to say. And in 2021, as the economy continues to falter while the rich get richer, looking like another multi-millionaire isn’t a great look.

Despite the show’s queen bee, Anna Shay, advising Kevin, “Don’t let the clothes wear you,” his fashion evolution during the show ends simply with a Dior version of his regular Converse. His sense of personhood, his identity of being a relatable guy from Philadelphia, is erased (if it ever truly existed). Kane, meanwhile, is already decked out with flashy brands, but beneath the Dolce & Gabbana you can see a man who’s still very bound up in traditional masculinity. “The kid in me, it’s like you don’t want to disappoint your parents,” he says in the final episode, and his wardrobe is one of a gay man who is unable to fully utilize his flamboyant wall of designer shoes.

Below, I’m going to walk you through the (rare) good, the bad and the horrid moments of Kevin and Kane’s wardrobe to reiterate that, no, money really can’t buy you style. 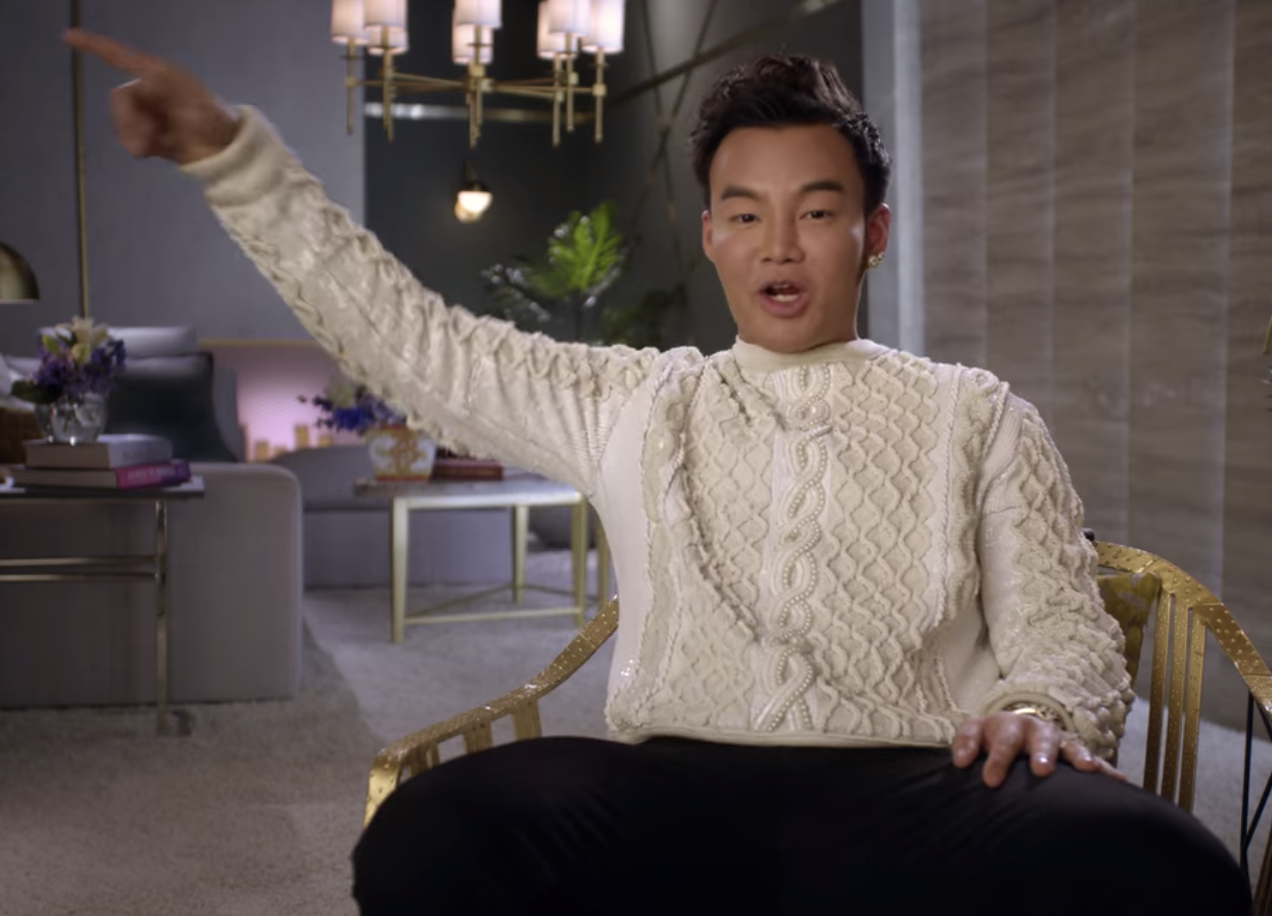 Kane’s pearl-encrusted cable-knit sweater succeeds because it’s a trend and texture that hasn’t been done to death. It also feels like something an unapologetic rich gay man would wear. (Kane doesn’t explicitly say he’s gay on the show, but the final scene has him pointedly asking if a man has iMessage before cutting to his voice saying that maybe he’s ready for a relationship.) 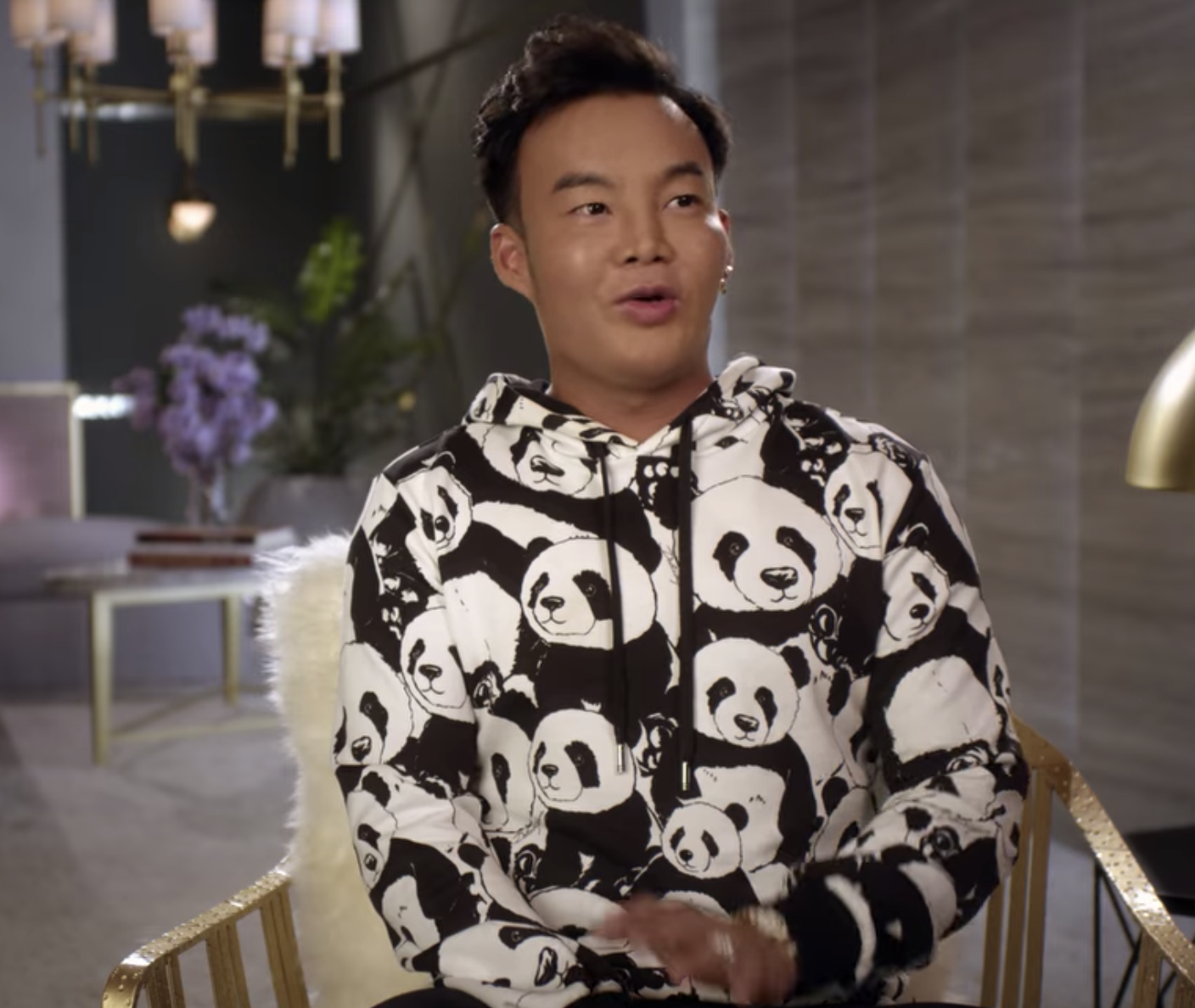 This Dolce & Gabbana hoodie Kane wears is a perfect fit and looks like something the cool boy in photo class would wear. Still, it speaks to the limits of Kane’s look: His outfits hew closely to what a member of One Direction might wear, before Harry started experimenting with dresses. Imagine Kane embracing his (seemingly obvious) queerness, with his budget as the fuel to the fire? It’s surely more interesting than this. 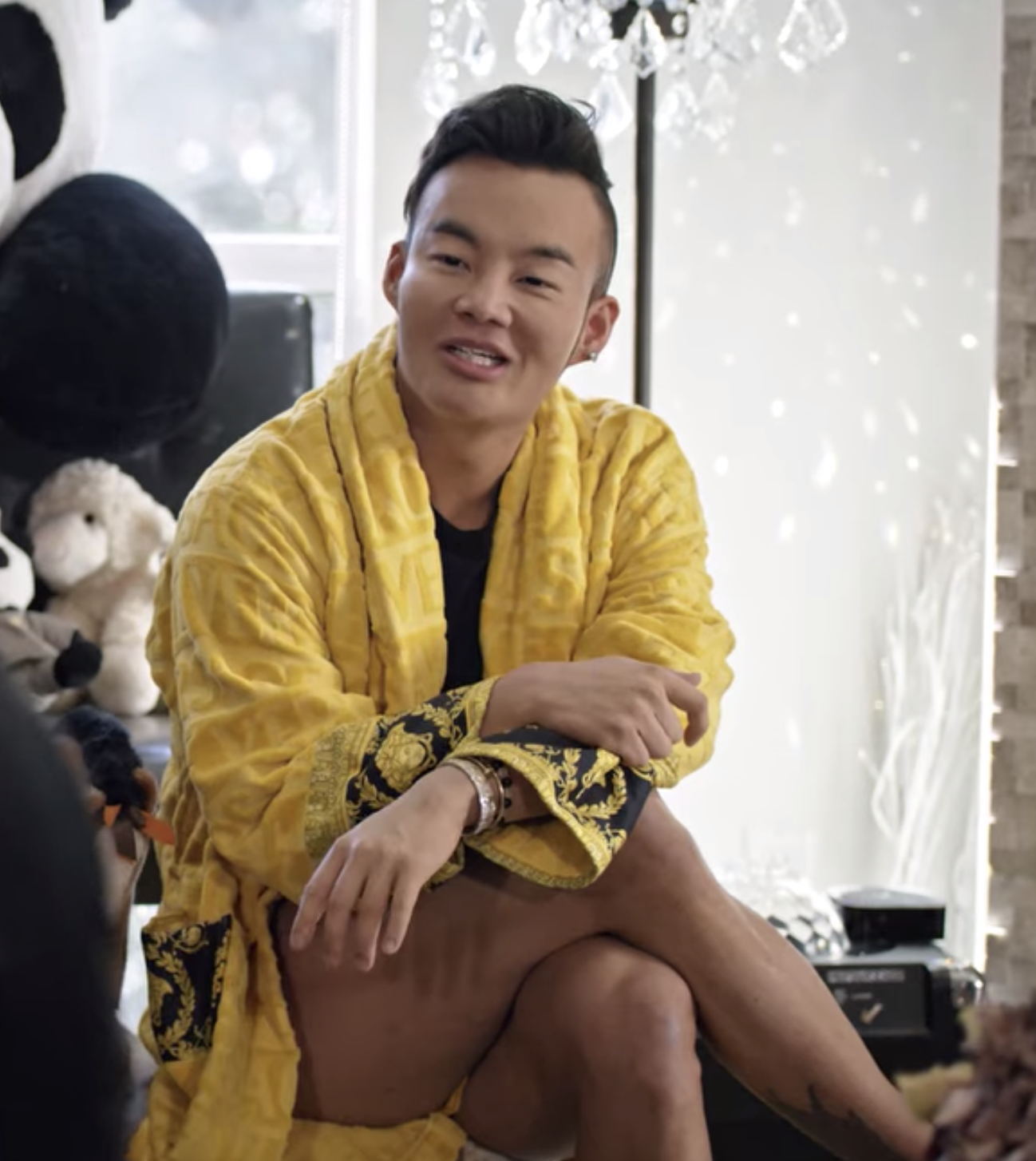 Doing your Buddist practice in a Versace robe? Now that’s a flex I can get behind. Like the best of style, this works because it connects with Kane’s life on many levels: his love of designer, his spirituality and his camp sensibilities. Liberace is applauding from the grave. 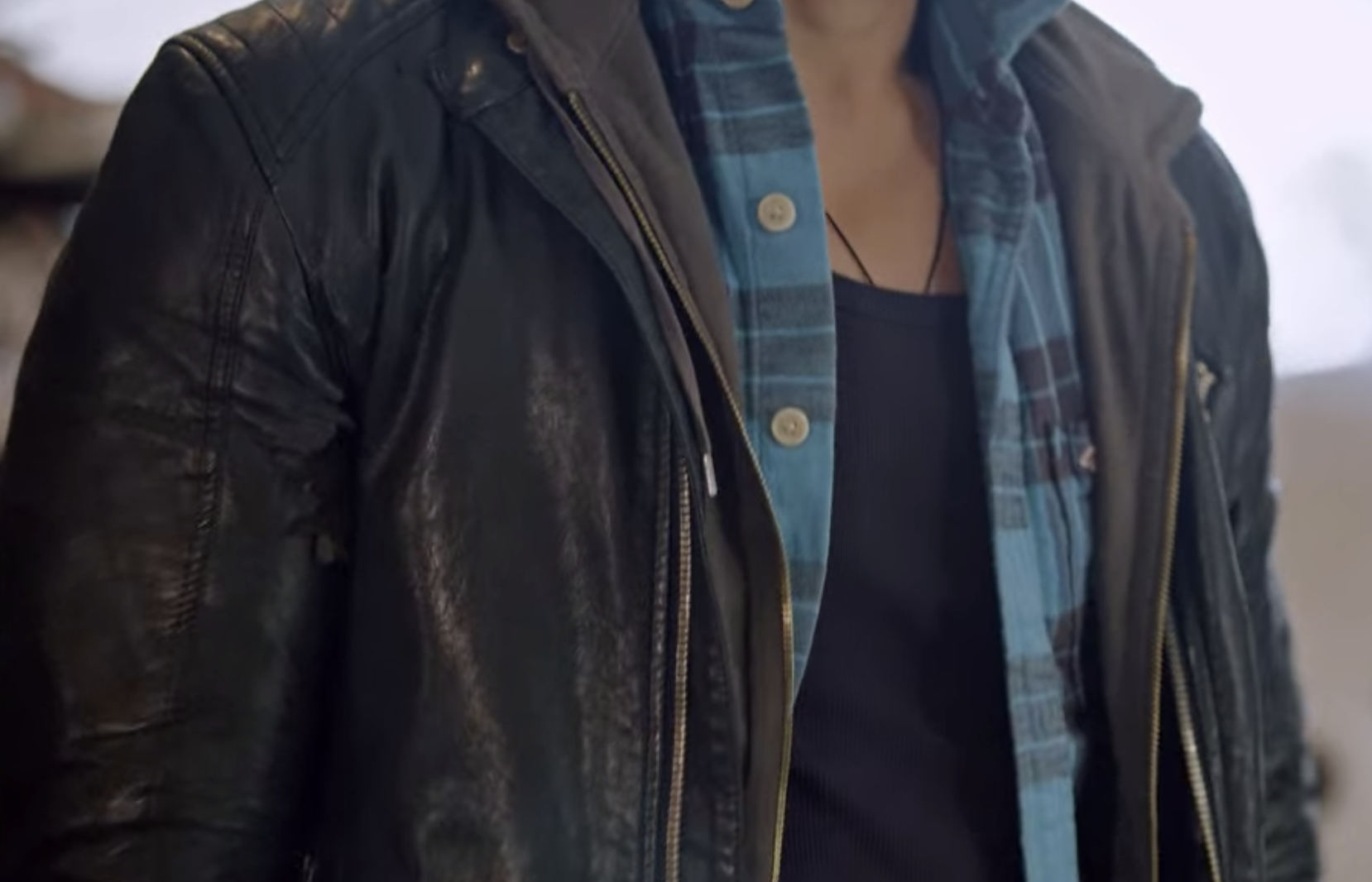 The above layering mechanism is classic Kevin: a tired collection of manly tropes (leather jacket, plaid shirt, black shirt). All together, it’s an outfit so locked in traditional masculine ways of dressing that it reads as a parody, just like Kevin’s, “Aw shucks I’m from Philadelphia idk about rich people things” act. As much as he crows, “I’ve never owned Chanel before” and wears endless black tees, we know the truth. 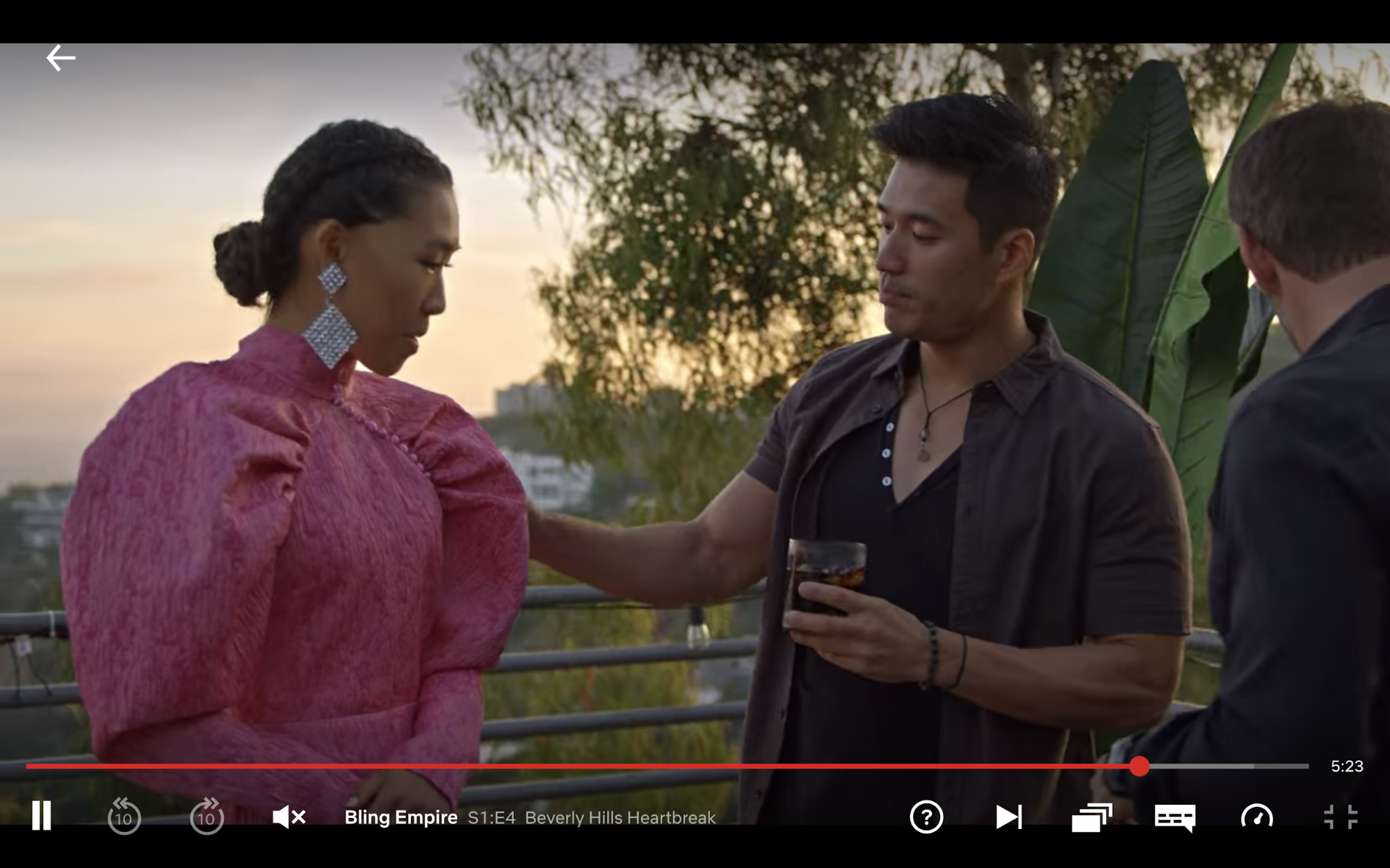 For my men reading this, try and inject some sense of yourself into your outfits. Unless you’re a dedicated surfer or obsessed with yoga, there’s no reason for the stone pendant. It’s a piece of jewelry that tries to say, “I’m a chill nice guy,” but instead screams, “I don’t have a bed frame.” 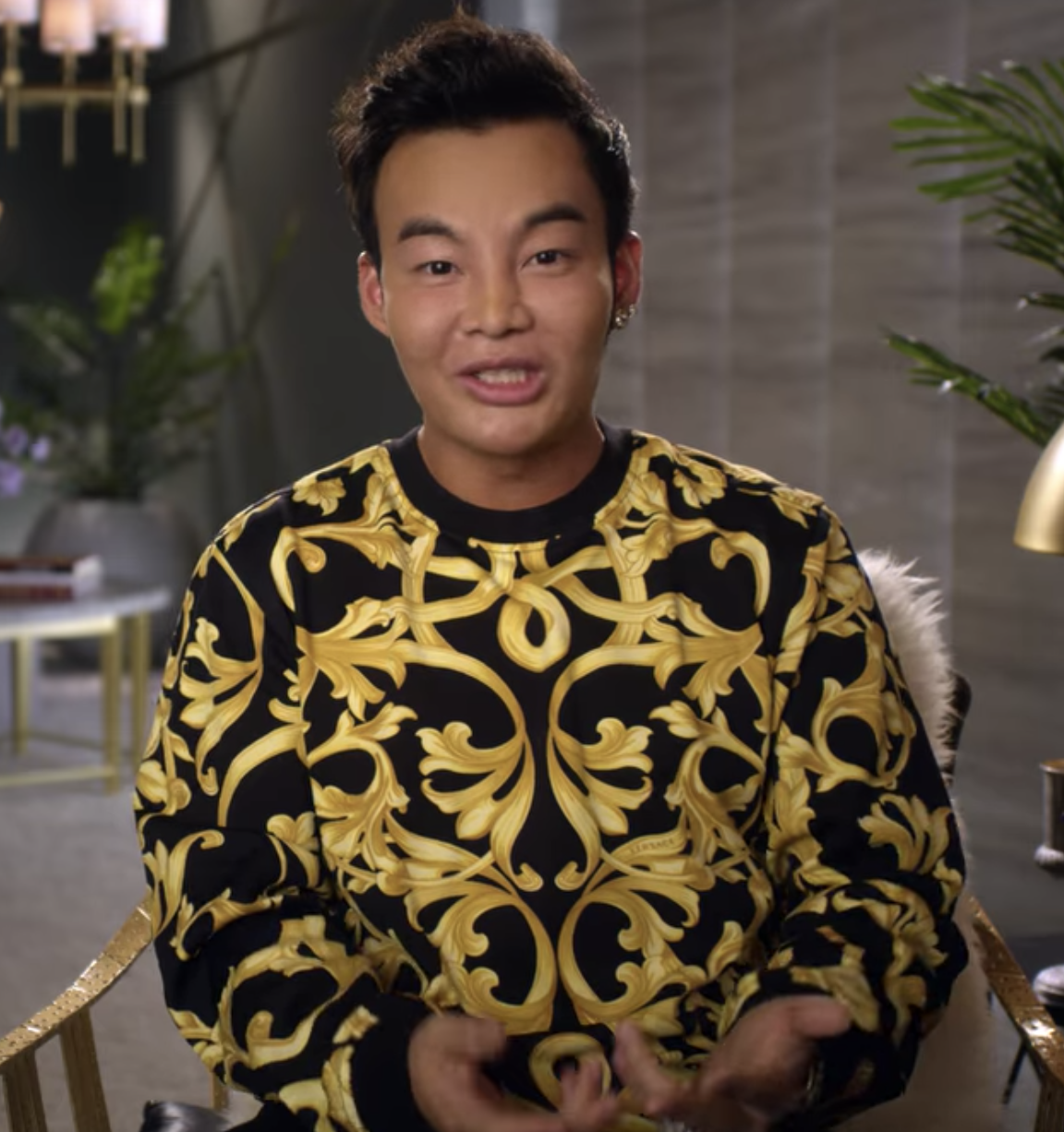 Kevin isn’t alone in his love of tropes from masculine fashion past. Kane’s style is flashier, but frequently lacks the boldness that flash is mistaken for. For instance, nothing yells, “I want everyone to think I can afford a designer” like this Versace sweater — it’s a motif that’s already made its way to the Topshops and the Asos’ of the world, something an alt bro would buy in 2013 after hearing Migos’ “Versace.” 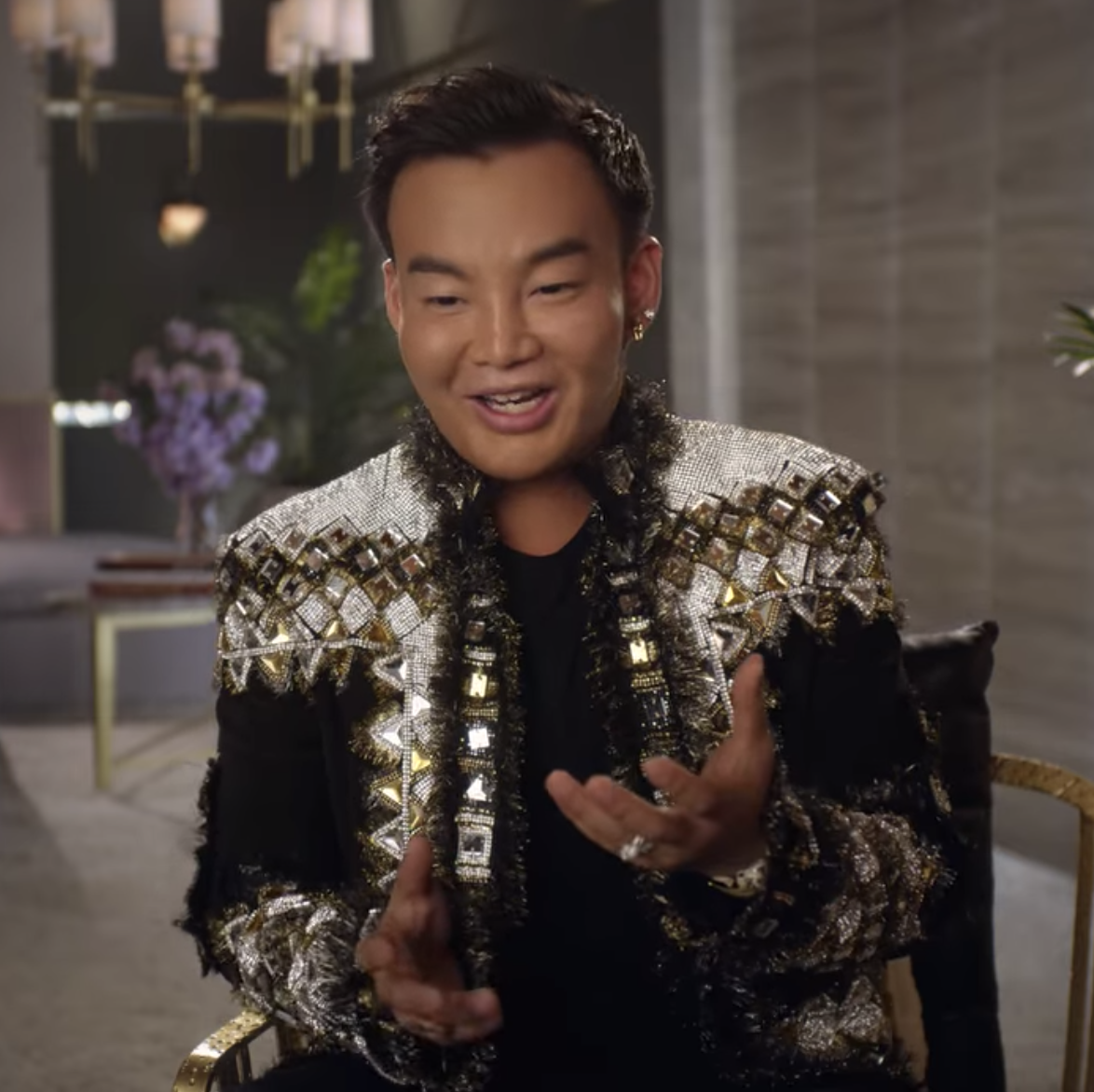 Sometimes Kane’s love of flash gets the better of him. This jacket appears in numerous party scenes and confessionals — it’s clear that Kane is very proud of it, and it’s probably designer. You’d need to boldly pair it in order to make it work, but as it stands, it’s just a misapplied, gaudy statement piece that’s wearing him. If you’re going to wear a gaudy jacket, you have to own it and reflect that gaudiness elsewhere. Kane can buy the clothes, but in the words of Freckle, “sometimes things that are expensive are worse.” 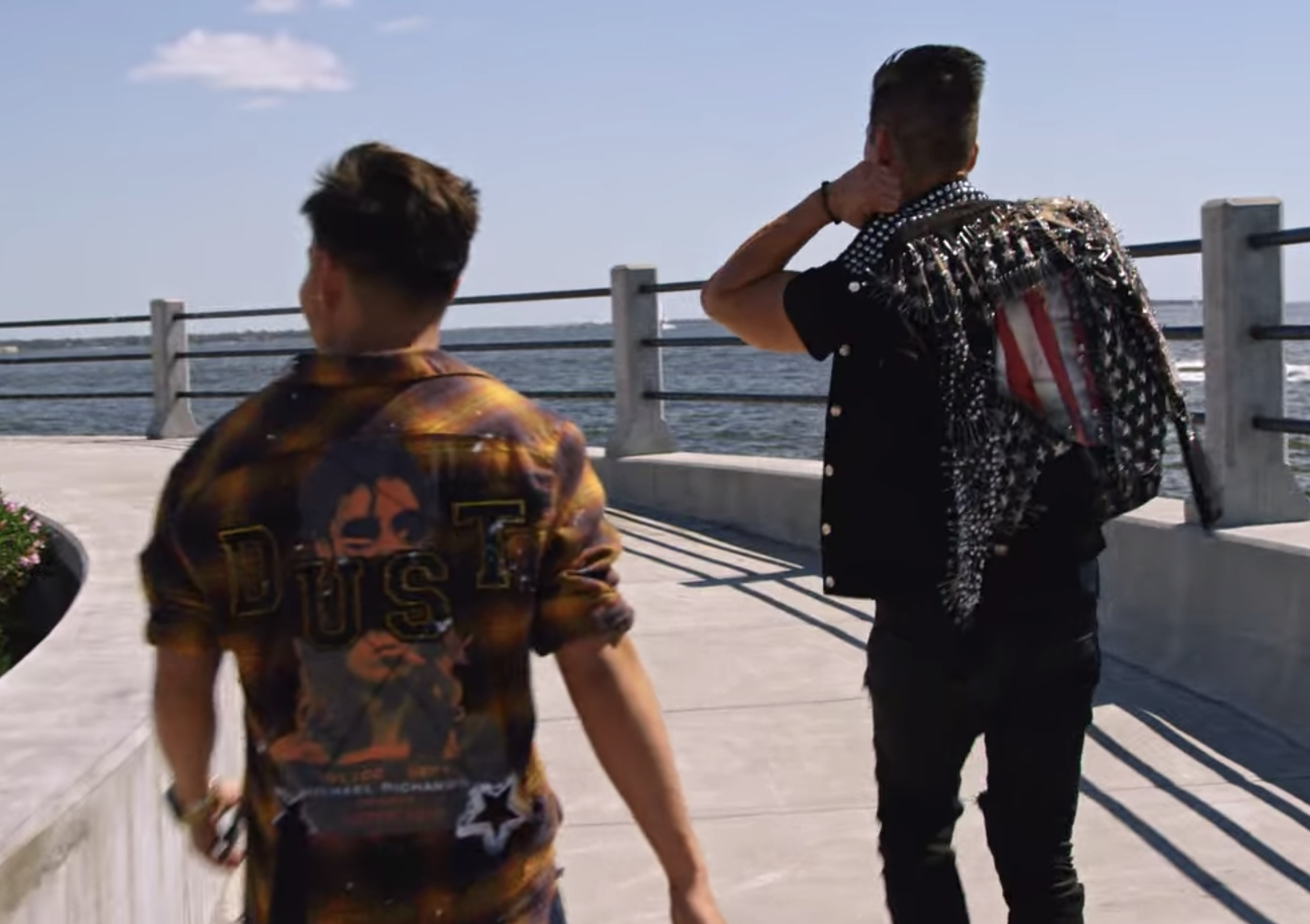 No outfits are more cringe than the ones our fave duo wear to a face-off between old south protesters and liberals. Clearly staged by a producer, the two arrive in outfits designed to echo the spirit of rebellion. Kevin has a literal studded American flag jacket by Balmain slung over his black T-shirt and jeans uniform. Kane is rocking a Dust of God button-down covered in patches and scrawled writing. They’re the outfits that an activist character might wear in a Disney movie, luxury fashion designed to appear rough and political. Next to the protesters dressed in comfy, oversized T-shirts, the artifice of Kevin and Kane’s political stance is laid bare. 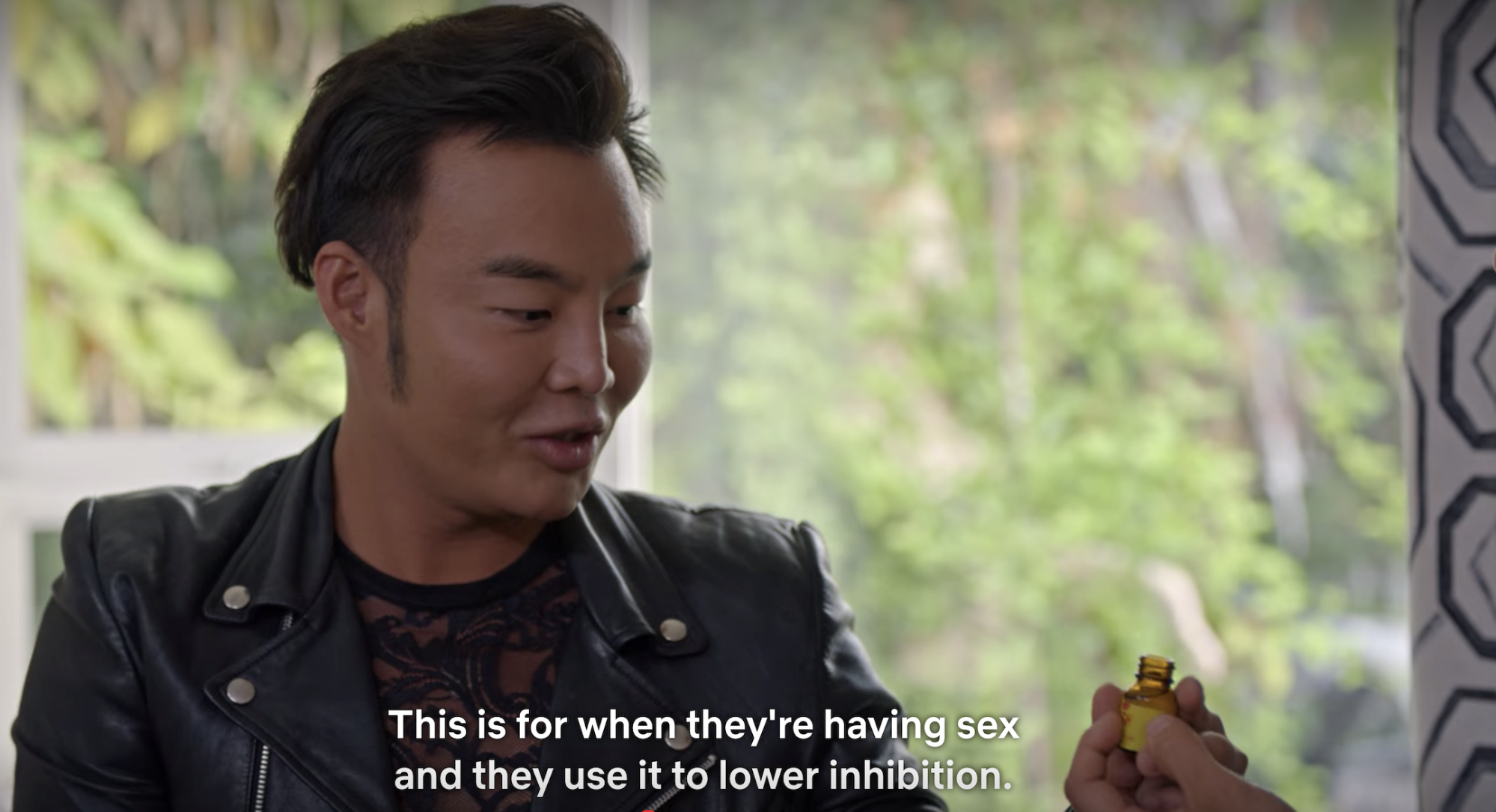 Never would I have imagined I’d be watching a presumably gay man on TV act so squeamish about sex in 2021. One look at Kane’s outfit, though, and it’s clear why he’s acting so prudish. This is a man with the funds to purchase any outlandish designer piece, yet all he can think of for a leather-and-lace themed party is a standard black leather jacket and a lace mesh shirt. Kevin doesn’t do much better, opting for no shirt at all with black jeans and leather jacket. It’s sexy, but a tired, traditional idea of sexiness. 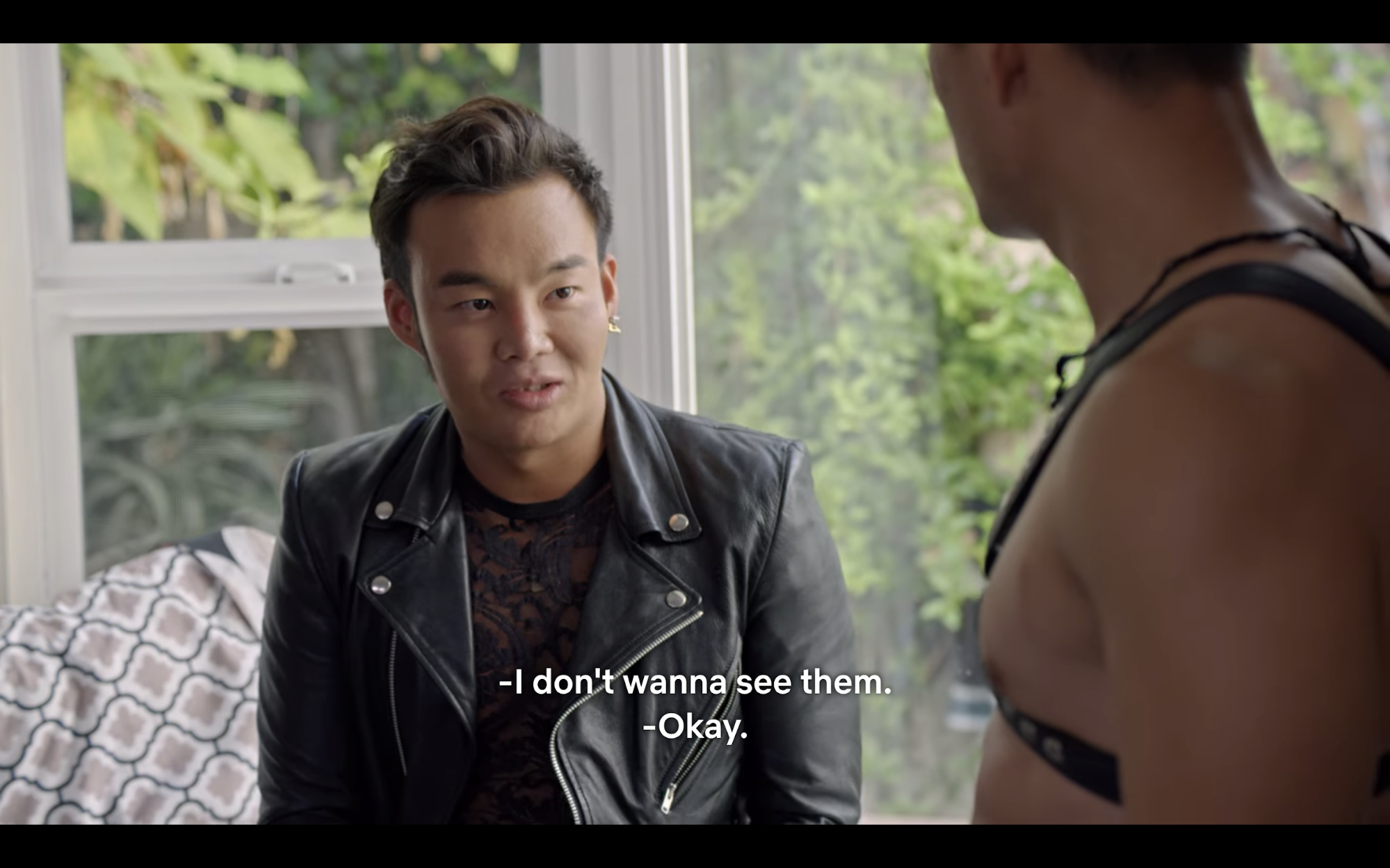 It makes me sad that Kevin and Kane have wasted the twin opportunities of a Netflix show and a big budget. We need to showcase men with points of view, who have something to bring to the conversation. If all you’re going to do when you get rich is buy standard rich people gear, then what’s the fun? Why do something that’s already been done? The show’s pitch promised a newness, a group of real-life crazy rich Asians like we’d never seen before, but Kane and Kevin’s fashion show that beneath the surface, there’s absolutely nothing boundary-pushing about any of this. I’m willing to believe that maybe Kevin and Kane have more to bring to our screens than empty displays of wealth, but right now, it all just seems so very bankrupt.

Mo Wilson is a freelance writer and DJ based in Brooklyn who is very excited that pop-punk is back. He currently runs the newsletter The Deviant Dispatch, which covers the events and gossip of the Brooklyn queer underground. Follow him on Twitter and Instagram @djgaypanic.