Hugh Jackman is cast against type in this HBO dark comedy about a scheming sociopath. It works because, deep down, we want to believe the worst about even our most likable movie stars.

There are a lot of reasons viewers will be drawn to Bad Education, the dark comedy that premieres on HBO tomorrow night. Based on the true story of a scandal that befell Long Island’s Roslyn school district in the early 21st century — in which it came out that administrators had embezzled approximately $11 million, the greatest school theft in American history — the movie has no shortage of juicy twists and colorful characters. As long as we’re not the victims, we love a good con — watching it unfold, and watching it fall apart. Add in pertinent themes about ambition, the American dream and our willingness to sacrifice principles for success and security, and you’ve got a film that’s both timely and tawdry.

But I imagine many will also tune in simply because it’s Hugh Jackman who plays Bad Education’s villain, the smiling Frank Tassone, who as superintendent used his charm and confidence to motivate those around him to reach greater heights. As the film begins, in the fall of 2002, Roslyn is ranked No. 4 in New York State, with the top spot clearly in the administration’s sights. With a likable leader like Frank around — personable, warm, funny, easy on the eyes, all those lovely Hugh Jackman qualities we can’t get enough of — there’s nothing this school can’t accomplish. And as more and more of their students matriculate to America’s finest universities — and a pricey but impressive skywalk about to be approved — Roslyn has become the envy of rival districts. If only anyone knew what Frank was secretly up to…

Of an informal poll of Most Appealing Movie Stars, Jackman would be near the top. Let the Russell Crowes and Sean Penns be famously difficult and unpleasant as they drone on about their “craft” — the 51-year-old Australian actor exudes good cheer and graceful showmanship. He can sing, he can dance, he can host the Oscars. He just seems like a good guy. I mean, c’mon: Who doesn’t like Hugh Jackman?

As with other beloved stars, Jackman can be more interesting when he plays against type. (Call it Jimmy Stewart Syndrome: We can’t help but be attracted to a genial actor’s darker roles.) It’s not as if Mr. Wolverine has played nothing but Tom Hanks-esque noble figures — his work in The Prestige, Prisoners, The Front Runner and Logan proves otherwise — but even when he gets gritty, we don’t assume that that’s the “real” Hugh Jackman. We think of Jackman as the eternally happy, friendly presence we see on talk shows or engaging in a playful “feud” with Ryan Reynolds. Hell, you could almost imagine being his buddy. That can’t all be an act, can it?

What’s intriguing about Bad Education is that it speaks to our collective cynicism about too-good-to-be-true people: He must be hiding something. Jackman seems to tap into something about Frank that maybe the rest of us wouldn’t because, on some level, he understands this charlatan. Not that Jackman is a sociopath like Frank is, but when you walk through life as one of the planet’s most recognizable and beloved individuals, it must make you think on occasion about the less-savory parts of your personality that people just don’t know — or that you haven’t shown to others. In a sense, we’re all charlatans — we’re all concealing our most vulnerable or shameful bits. But by playing a man hiding his darker side, Jackman has a little fun commenting on our rosy perception of him. 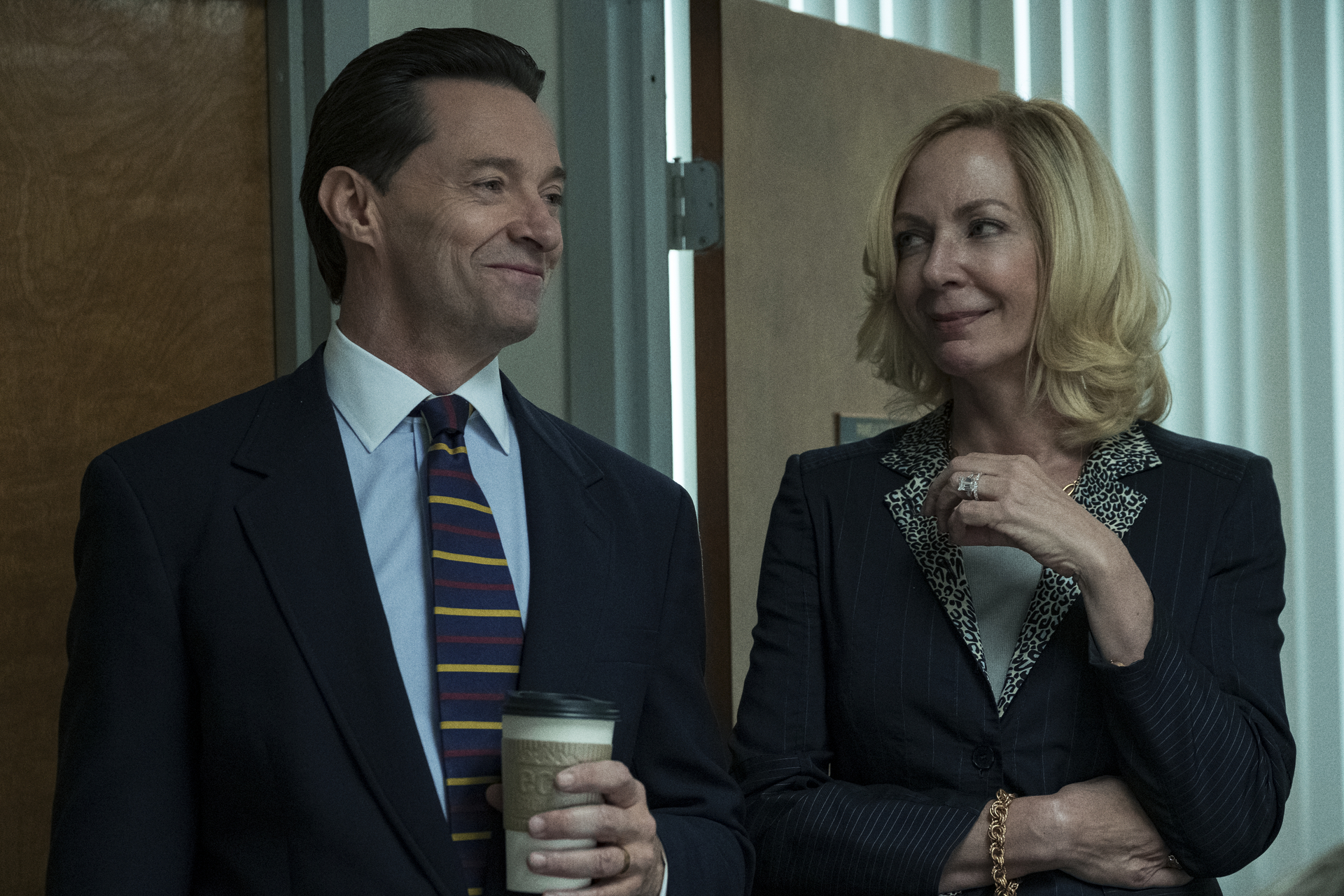 The film’s plot gets set in motion when Rachel (Geraldine Viswanathan), a smart junior on the school newspaper, is assigned to write a puff piece about the skywalk, but she decides to do a little digging, concerned that the administration didn’t consider competing bids for the project. Going through old records, Rachel discovers that assistant superintendent Pam (Allison Janney) misappropriated funds — to the tune of about $250,000. If that got out, Roslyn’s sterling reputation would crumble — the school can forget about the fancy skyway, an increased budget or that coveted No. 1 ranking.

Frank has worked too hard to let that happen. So, with his calm tone and slicked-back hair, he suggests to the school board that they quietly fire Pam, make her departure look like a leave of absence because of a serious, unspecified health concern, and cover up the whole thing. The board, including a mustachioed Ray Romano, agrees. Things are going great at Roslyn — why rock the boat? Good ol’ dependable Frank knows best.

Directed by Cory Finley, who previously made the wonderfully icy Thoroughbreds, Bad Education explores all the ways that Frank’s plan goes terribly awry. The misappropriation didn’t end there, and Rachel’s desire to find out just how bad it is ends up dropping a bomb within Roslyn — and on Frank as well. I won’t say more, because it’s better to know very little going into the movie so that the surprises remain intact. But let’s just say that, for years, Frank has been deceiving those who trusted him — and that the ruse is about to be exposed.

When I saw Bad Education last fall in Toronto, I was underwhelmed by the film, which has mostly gotten glowing reviews. Part of my problem stemmed from the fact that I’m not sure Finley has anything fresh to say about corruption, ethics or school politics that wasn’t expressed better in Election. Also, the notion that people will follow their own craven self-interests isn’t exactly novel. As entertainingly outrageous as the true story is, Bad Education doesn’t necessarily add much to it.

Watching the film again this week, I still feel the same. But the one element of Bad Education that doesn’t feel expected is Jackman. We’ve seen guys like Frank before in movies — the polished, well-dressed schemer — and so Jackman is hemmed in by our familiarity with this type. What gives the film its edge is the slow realization of just how much Frank loathes the people around him. Always jovial and encouraging, this superintendent comes across as altruistic, but he’s really only interested in himself. And the scam has been going on so long that Frank is almost disdainful of his colleagues for being so trusting that they’ve never seen through it. He despises them for being too stupid to catch him.

Although it was a very different performance, Jackman’s fellow nice guy Hanks similarly examined this idea of what we expect from beloved public figures in last year’s A Beautiful Day in the Neighborhood. As in Bad Education, a journalist (Matthew Rhys) sets out to find the truth — in this case, he’s determined to uncover the “real” Fred Rogers and prove that his geniality is a mask. (After all, nobody’s that decent, right?) Having Hanks play Rogers was brilliant because the movie (and the actor) was arguing that Fred Rogers’ determined kindness wasn’t effortless but, rather, a choice. What others derided as a lack of depth was, in fact, a way of projecting goodness onto a world that often settles for sarcasm and cruelty. I got the distinct impression that Hanks was trying to tell viewers that being a nice guy is a lot harder than we think — like any of us, sometimes he doesn’t want that burden.

In Bad Education, Jackman offers a complementary argument, hinting at all the ugliness beneath the good-looking, seemingly well-adjusted people we admire. Frank has been engaged in his misdeeds for so long that they don’t really register anymore. As a result, what’s most chilling about the performance is its slickness — the sense that Frank isn’t troubled by his abhorrent behavior. I wouldn’t want to speculate about Jackman’s real feelings about celebrity or his fans, but in Bad Education it’s a kick to see him sucker everyone around him. It’s a performance about performance — how we try to trick people into believing the persona we’re exhibiting.

Along those lines, while watching the film, I often thought about Jackman’s portrayal in The Prestige, which focused on a different form of trickery, magic — and it’s interesting that his character, Robert Angier, is an asshole in that film, too. Both Roger and Frank have made their living fooling people, and that knowledge has given them an arrogance in which they view themselves as superior to all those around them. Roger’s a lot more overt about being a prick, but each of them dares us to figure out the deception.

Is Jackman actually not a good guy? Is he secretly a monster? I don’t think so — but I wouldn’t be surprised if playing someone like Frank is a way for him to remind viewers that he’s as flawed and awful as the rest of us. Speaking recently to The Daily Beast, Jackman talked about the appeal of tackling Bad Education’s change-of-pace role: “It was about the character, about doing something I hadn’t done before — I think something that audiences wouldn’t expect me to do, with some twists they hadn’t yet seen from me — and I’m fascinated by human nature.”

But for audiences, the fascination comes from watching an ostensibly swell fella try on the clothes of a bad guy. Weirdly, it’s comforting — confirmation that even someone as lovable as Hugh Jackman might really be a son of a bitch. His performance lets us know that he knows that we always harbor suspicion about the people who seem a little too perfect. Bad Education’s insights into greed and hypocrisy aren’t particularly deep, but Jackman keeps going beyond the surface. He makes you wonder what we don’t see behind a smile.