I’m at a “pre-Coachella” themed office party, and everywhere I look someone is clutching a pack of smokes. Women grip their packs as they touch up their glittery makeup before hitting the photo booth — and once there, they pose adoringly with them. Meanwhile, the men in line for the food truck drum their fingers against their packs as they wait, and fiends like me pick up stray display packs, shamelessly shaking them in hopes of discovering a spare smoke forgotten in its crevices.

Needless to say, thick clouds of smoke billow throughout the halls of this office space, the kind that’s designed to look more like an apartment than the homebase of a corporate entity. I haven’t entered a time warp, though, and found myself in 1960. As far as I can tell at least, it’s still 2019. And so, the vibe is much more MedMen than Mad Men. Or more simply put: These packs are full of joints, not cigarettes.

The party is being thrown by the Lowell Herb Co. at its headquarters in Hollywood. Each pack of Lowell smokes contains seven joints, and every joint is full of half a gram of weed, which means that purchasing one is equivalent to buying an “eighth” of loose flower. The Coachella theme is fitting because “convenience,” “concerts” and “convenience at concerts” are among the most referenced reasons why people buy pre-rolls. (The other key motivators are a desire to try different strains one at a time instead of committing to a large amount of loose flower, and an interest in smoking regularly without the need for pipes and bongs.)

Lowell refers to itself as the “#1 pre-roll cannabis company” because of the popularity of its packs, which they call “Smokes.” According to Sean Black, the company’s creator and co-partner, Lowell produces four out of every ten branded pre-rolls sold in California. In fact, in 2018, Lowell was the highest-selling branded pre-roll on the market, and with sales showing they’re double digits ahead of their closest competitor, the Lowell team anticipates retaining this status in 2019.

Black says the key to the popularity of Lowell pre-rolls is the quality of their flower. “We use 100 percent top-shelf flower, never shake or trim and create custom blends based on flower sourced from a variety of organic farms,” he explains. “We don’t create our pre-rolls by gauging what sells the most, but by testing a lot of strains and creating our own blends based on which have the best flavors and produce the best effects.”

Lowell began selling pre-rolls before it sold loose flower because of the opportunity for higher quality products in this segment of the cannabis business. “There’s this idea that you can just shove anything into a pre-roll and sell it,” Black says. “We don’t do that.” (Historically, this sort of parallels the tobacco industry’s initial approach to the cigarette. When slavery ended in the U.S., the tobacco industry lost a lot of its workforce. Thus, focusing its business on mass-produced cigarettes rather than fine, hand-rolled tobacco allowed them to use lesser quality tobacco and required less employees.) 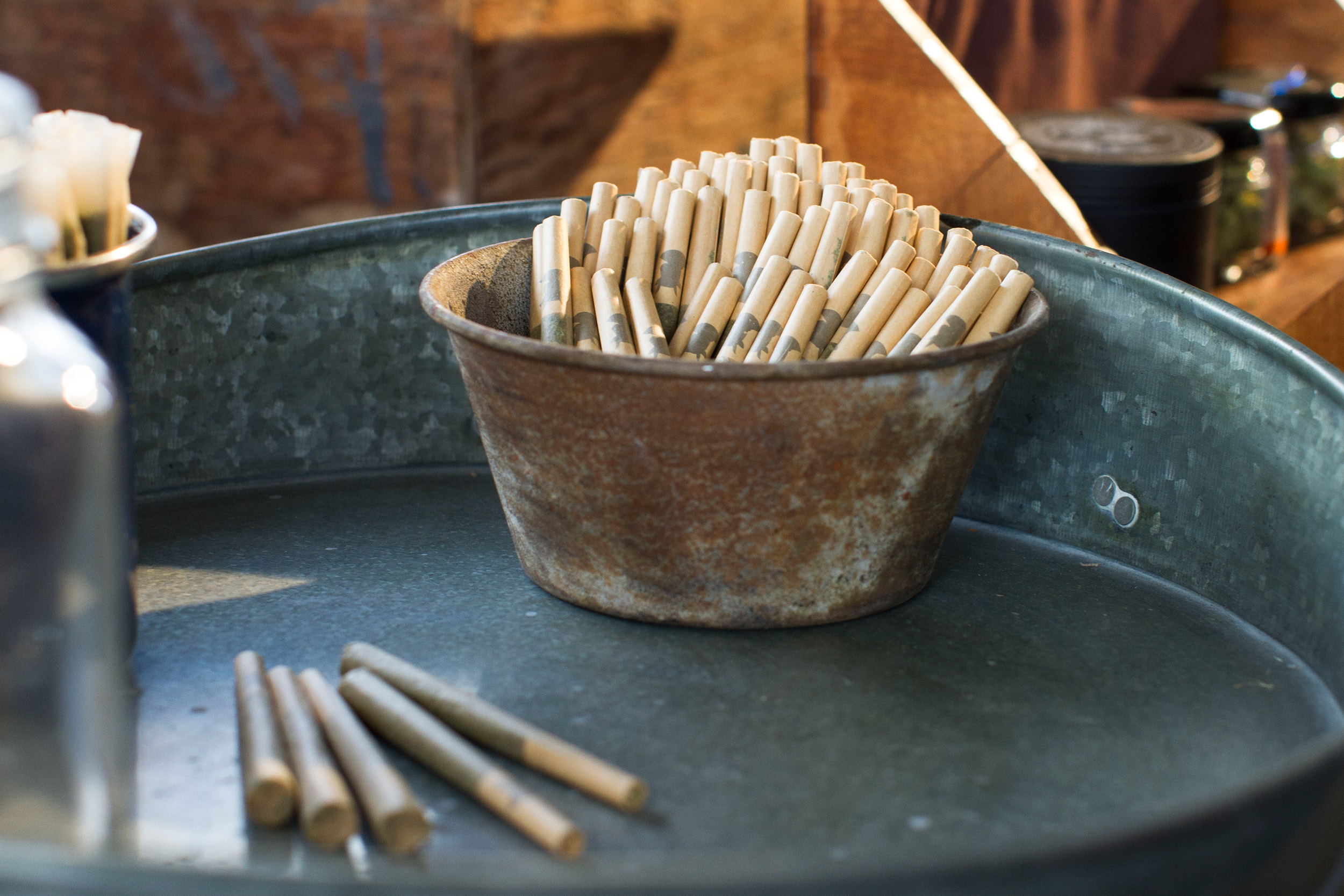 Valery Sepulveda of High End Creatives, a creative agency specializing in cannabis, tells me diminished quality is why a lot of purists avoid pre-rolls. “I’d say the key differentiator in a pre-roll is the formulation of the blend, or the combination of flower plus terpenes. Even the type of paper matters. There’s a lot of hesitation in the cannabis space to consume pre-rolls due to the perception that they’re made with low-quality flower,” Sepulveda says. “Unfortunately, this is true to some extent. I’ve had pre-rolls that have tasted horrible or haven’t produced desirable effects. One actually made me nauseous and anxious.”

To use another apt comparison, they’ve historically been the hot dogs of the weed industry. Not exactly unfairly either. After all, pre-rolls originated at dispensaries as an anti-waste project looking to make use of shake (powdery dust); trim (discarded parts of the plant that may get you high but will definitely scorch your throat); and poorly selling strains (probably because they tasted like shit). “One simple hack is smelling the pre-roll before you consume it. You can instinctively tell if there’s stems in it because it smells less fresh and has bark scent undertones,” Sepulveda advises. “You can also identify synthetic smells, which could be a sign of pesticides or unnatural substances that may have been used in the production process.”

During the peak years of California’s medical marijuana market — or the time before weed became legal for all adults in the state in 2018 — pre-rolls were most commonly acquired as a free gift at dispensaries. Whether given to customers during certain “happy-hour” periods or distributed as rewards for large purchases, pre-rolls were generally created by budtenders during slow business hours. Under current recreational law, though, budtenders are no longer allowed to roll customers joints, and dispensaries are no longer allowed to offer customers pre-rolls for free. And while some dispensaries still create their own pre-rolls for purchase, often priced as cheap as $5 a joint, this lack of freebies means there’s more appeal in “branded” pre-rolls such as the ones Lowell makes (which sell for $40 a pack, pre-tax, roughly the same price as an eighth of flower of comparable quality).

“There are [now] an incredible amount of pre-rolls on the market,” Black says. “The reality is, a lot of these companies are [only] good at marketing. They outsource all of their production and put their own effort into selling the product.”

Wagner Dimas Inc., a business co-founded by its Chief Technology Officer Wagner Dimas, is probably the best example of this. The company is all about creating technology that makes the mass production of pre-rolls easier for the brands who want to sell them. As such, as of last year, it reported creating pre-rolls for more than 30 cannabis brands.

“The future of the pre-roll market is going to be controlled by big business, and there’s nothing we can do about it,” says Joshua, the founder of Original Mini Joints, a pre-roll company specializing in “shorty” joints that are — you guessed it — about half the size of the average pre-roll. These cute little joints are perfect for quick, clean smoking and come in a tin box the size of an Altoid Smalls, meaning you can easily store a dozen joints in your pocket without the typical clunkiness of canisters, pipes and papers. “We don’t have corporate investors at this time, but soon we won’t be able to compete without them because of the extreme taxation and regulatory costs of running a cannabis business.”

Lowell rolls their own pre-rolls, but the company does receive investment from the mega-cannabis holdings company MedMen. Either way, Black says Lowell approaches cannabis as a “high-end agricultural product” — a major reason why Lowell pre-rolls are packaged with food-grade materials (e.g., wax paper), not the plastic tubes that house most pre-rolls. “Most of those plastic tubes come from China and haven’t been tested,” Black explains. “Why would you want something you’re smoking to sit in a plastic tube full of chemicals for who knows how long?”

Instead, Lowell packages its smokes in a slidable pack that comes complete with high-quality matches and a textured edge to strike them against — the perfect blend of thoughtfulness and convenience. Such packaging has made Lowell an early mainstay at dispensaries, especially as one of the only joint “packs” that mimics cigarettes. “I’m a tobacco smoker and that’s part of why I love pre-rolls,” a guy at the Lowell office party tells me. He says he buys a pack of pre-rolls every six weeks, which is how often he buys weed, and that one pre-roll can usually last him a few days, if not a whole week. 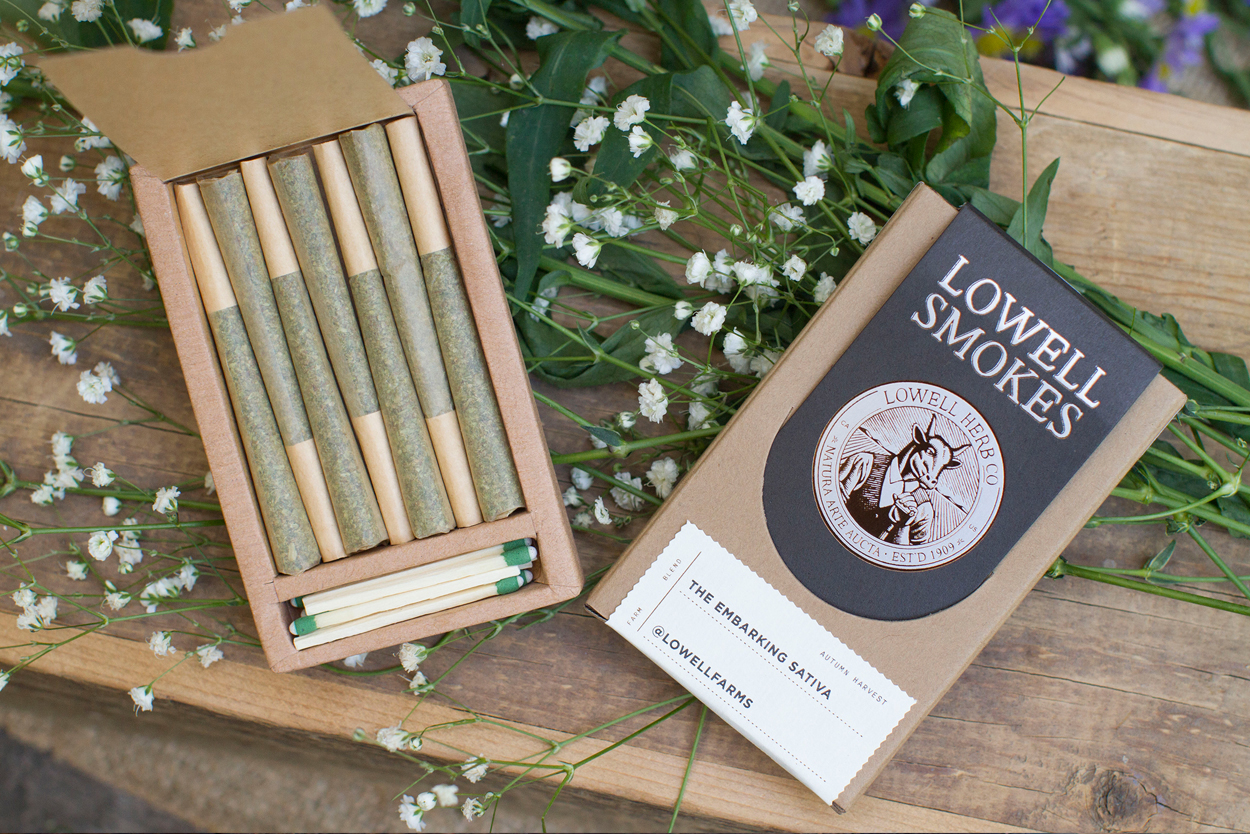 “It’s a format I’m used to and comforted by,” he continues. “I’d never roll my own tobacco, either. I’ve ruined and lost so much weed trying to roll. I also find that if I’m going to spend my free time doing stoner shit, I’d rather just get high and get to the part where I touch my planetary stone and watch Ancient Aliens more quickly.”

Also, according to Black, a joint is the “purest expression” of cannabis. Vapes may be a popular, potent, ashless and odorless way to get stoned, but Lowell remains committed to smokable flower (at least for now). Black says he’d rather experience the plant directly, in the simplest way possible. He certainly isn’t anti-technology or anti-vaping, but with Lowell flower, he knows he’s selling (and smoking) weed that has its many cannabinoids and terpenes intact. He compares his interest in a great joint to the way a chocolate snob prefers a clean piece of high-quality dark chocolate that’s steeped in antioxidants and natural sugar to a convenience-store candy bar.

Of course, it’s not hard to imagine in this ever-more legalized land that convenience stores will also soon be selling pre-rolls alongside their candy. Here, too, the comparison to the tobacco industry more than holds. Namely: After centuries of rolling their own smokes, not everyone bought branded cigarettes when they first became widely commercially available in the U.S. in the late 1890s. But sales soared by the early 20th century, and today, pre-rolled cigarettes reportedly account for 93.7 percent of tobacco sales in the U.S.

Which recalls a funny moment at the Lowell office party. Amid all the free pre-rolled smokes, there’s a crafty area full of papers and glass canisters of weed for some DIY rolling. And while it’s never barren, there is a clear consensus among most of those who attempt to roll their own joints: The pre-rolls beat their own efforts every time.