Meet Rad Trad Ron Swanson, a disgruntled Catholic who spends his days shitposting about communion and sharing memes about people who don’t celebrate Mass in Latin

Ron Swanson, the fictional government-hating libertarian boss on Parks and Recreation, isn’t outwardly religious. He certainly isn’t Catholic; in season one, Leslie Knope describes him as a “white Protestant man with a full, rich mustache.” But in the universe of Catholic Twitter, Ron Swanson is a disgruntled layperson who spends his days shitposting about communion and sharing memes about people who don’t celebrate Mass in Latin.

Rad Trad Ron Swanson — “Rad” referring to radical and “Trad” meaning traditional, as in a radically traditional Catholic — has strong opinions about how other Catholics should live, just like the real character. (“There are three things I hate: lying, skim milk and Vatican II,” reads his bio.) While Pawnee, Indiana’s Ron Swanson protests government overreach, Rad Trad Ron protests what Trads see as the liberal practice of receiving the Eucharist in your hand, rather than in your mouth.

If you’re confused about why a random TV character has such strong opinions about Vatican II, or even what Vatican II is, you’re not alone. He must be appealing to a niche audience, right?

Welcome to the world of Rad Trad Catholic Twitter, where (mostly) self-identified traditional Catholics share memes, tips and struggles from their attempts to faithfully adhere to traditional Catholic teachings while living, as so many young people do, extremely online. The Rad Trad is proudly orthodox — but decidedly 21st-century.

On Twitter, they refer to themselves as simply “Trads.” They’re one of a few distinct subgroups of religious meme accounts; there’s also leftist Catholics, “Tradinistas” (associated with Marxism and Latin American liberation theology) and weird Catholic Twitter, some of which can overlap in interesting and unexpected ways.

According to the Catholic Herald’s description of these sects, “The Rad Trad’s arrival is heralded by a whiff of pipe smoke. Clad in tweed and sometimes sporting pectoral crosses that would make an archbishop blush, Rad Trads mistrust everything that followed the year 1965 (and 1789, for that matter).”

To understand the online world of Twitter Trads, you need to know a bit about Catholic teaching and Church councils. We’ll look at their beliefs through the lens of Vatican II, the Latin Mass and the “secular” world.

The Second Ecumenical Council of the Vatican, also known as Vatican II, was a 1960s-era meeting among thousands of religious leaders to address the relationship between the Catholic Church and the modern world. After Vatican II, Mass was allowed to be celebrated in the vernacular language instead of only in Latin. It also removed the requirement for nuns to wear habits.

Trads share a fundamental rejection of the modernized changes that resulted from Vatican II — but the term “Trad” is not as straightforward as it might seem, explains Woke Space Jesuit (aka w0ke_space_jesuit.exe), one of the most famous Catholic tweeters — he’s even been quoted in the New York Times. He describes himself as a “Catholic-communist,” not exactly a Rad Trad. But he’s familiar with the scene and understands that any attempts to define Catholic trads will naturally be insufficient, because the term can mean many different things, and the worlds of lefty Catholic Twitter often overlap.

When I reached out to other Trads online, they expressed their discontentment with the secular world and their dissatisfaction with what they see as an increasingly secular and modern Catholic Church. One 18-year-old man on Twitter who runs an active Trad account explains, “Traditionalist organizations are always strict and responsible about the Faith, with beautiful liturgy and traditions, in contrast to the milquetoast mainstream church and its decadent liturgy.” 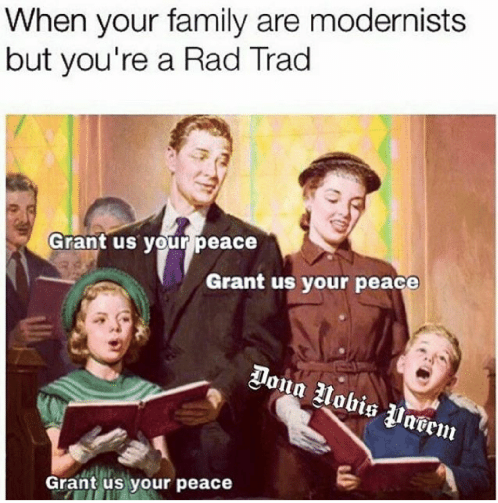 Not all Trads share the same beliefs, though. They all appreciate a pre–Vatican II style of worship and aesthetic, but that’s about where their commonalities end.

“A lot of [the scene] is teenage redditors who have bought into a memetic complex that equally includes racism, conspiracy theories and denigration of the ‘modernist’ Vatican,” @kev_jg tells me. “My suspicion is that the majority of these dudes have never been to a Latin Mass.”

Kev_jg doesn’t self-identify as Trad, but he says the term could be loosely applied to him: He calls himself “a practical Catholic who strongly prefers the older forms of the rituals, says most of my prayers in Latin [and] studies Thomism,” which is the philosophy based on the teachings of St. Thomas Aquinas.

Kev_jg draws a distinction between what he calls “racist Trads” and people who simply prefer older forms of the Church. “‘Racist Trads’ (for lack of a better term) are not a phenomenon that will tell you much about traditionalism.” Instead, you’ll learn “a lot about how sad lonely young men build community on the Internet.” These “racist” Trads often talk about old times when the Church was better, and they’re not shy about their white supremacist ideas: They tend to believe that “the broader Church” has been “cucked” by the “Judeo-Masonic conspiracy,” or something on that level, according to Kev_jk.

I asked many members of Trad Catholic Twitter how they ended up there. Is there a gateway to Trad Catholicism? By far, the most frequent answer was “TLM.” That’d be the traditional Latin Mass, or Tridentine Mass. TLM was the most widely used Mass liturgy in the world prior to Vatican II, which made it okay for Mass to be spoken in the vernacular. Catholics who attend the Latin Mass are usually attracted to the solemnity and sense of tradition. As one 18-year-old Rad Trad tells me, “Most people’s reaction to the Latin Mass is, ‘Why was this hidden from me?’”

The TLM is sometimes known as the “extraordinary form,” and usually compared to the vernacular ordinary form, or Novus Ordo. Some Trads make memes about the differences between Novus Ordo attenders and TLM attenders.

Trads often name their meme accounts after Novus Ordo jokes to signal their love for TLM. Other accounts, like @NovusOrdoWatch, seem to take their mission a bit more seriously. This account’s bio reads, “Unmasking the Modernist Church of Vatican II.”

The difference between types of Trads comes down to whether they personally enjoy TLM — that is, they simply prefer it — or whether they think it’s the only valid way.

I asked the account Augustine of Hiphop (@hiphopaugustine), who combines hip-hop and the writings of St. Augustine, to explain his love of the TLM. He wrote me a rap in a DM:

While Augustine respects the TLM and the traditions that come with it, he attends the Novus Ordo, and he rejects the common idea that the TLM is inherently superior. He rejects the TLM attendees who use their preference for Latin to feel superior to other Catholics. Or, in his words:

“You heard about these TLM cliques, they the fake Trads
If Latin makes you judgy then you better hit the brake pads.”

Memeing Their Way Into Faith

With all of these accounts and memes out there, I wondered if the Rad Trads were actually helping more moderate Catholics embrace Trad beliefs, or if the scene was too insular to pull in many curious newcomers.

A 26-year-old man on Twitter, who asked to remain anonymous, writes, “I think memes do work to an extent. Twitter has a lot of group chats (50 people max) which can have a lot of secret conversations. In a group I am in, quite a few guys in there have converted to the faith. Memes are a way to turn ideas or truth that would have been too lengthy or complex into pithy or clever one-liners or one-image zingers, which is immediately understood.”

Another 18-year-old man told me the group chats are their most important social network: “We are ‘organized’ through group chats. Nothing happens through the day without it being reported there.”

Like a potential story about them, for instance. I learned about these group chats first-hand. After I messaged a few Trads asking to talk, word spread quickly to their friends. Within a few hours, I had several tweets warning Trads not to talk to me for my “hit piece.” Other Trads told me that people in their groups were discussing me and asking if I was a “leftcath,” attempting to combine Catholicism and Marxism. 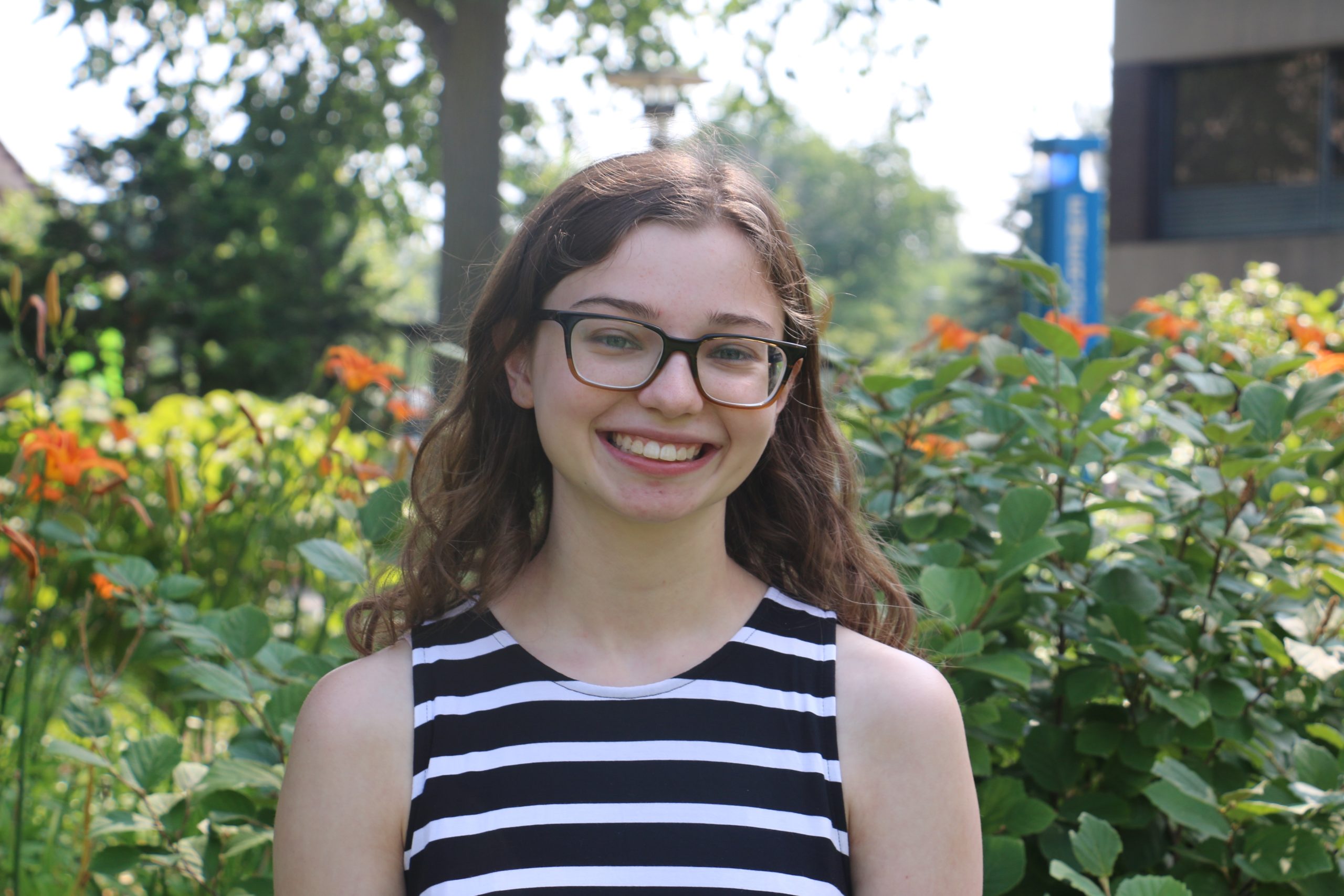 Mary Meisenzahl is a freelance writer and student studying history at Wellesley College. She is interested in writing about digital rights, religion, and the Boston area. Previously, her work has appeared in Curbed Boston and Boston Magazine.