Why are so many millennial men obsessed with this crotchety 72-year-old?

My friend Amelia first alerted me to the phenomenon of the Larry David Guy. On Instagram, she posted a collection of screenshots of the profiles of male Hinge users who had answered the built-in prompt “Dream dinner guest?” with “Larry David.” When I joined the app a few years later, I saw them too, and when I posted screenshots to Twitter, I got even more in return.

On the February 7th episode of the podcast Who? Weekly, co-host Bobby Finger paraphrases co-host Lindsey Weber describing Curb Your Enthusiasm as a show “for, like, Boomer men. They’re like, ‘Yeah, Larry David! Larry David is great!’” That had been my understanding too: lots of people like Larry David, but to put him front and center on your dating profile, you’d have to be… my dad.

Yet I had the evidence: Of all the actors, politicians, athletes and historical figures in the world, the person that guys in their 20s and 30s seem to connect with most is a cranky 72-year-old multimillionaire many times over. And so, I became an amateur cultural anthropologist, setting out to answer the eternal question: What’s the deal with Larry David Guys?

Maribeth, 57, dated an “LD stan” and worked in a Manhattan law office with several. She describes her former coworkers as “a bunch of Trump-supporting Republican millionaire Jewish men” who “would watch Curb while on muted conference calls.” Her former beau, too, was a lawyer, but “poor due to a series of bad life decisions.” The guy, in addition to being “human garbage,” was “very Christian and mean.” She theorizes that David’s fans find his “bad behavior” — or the bad behavior of his on-screen avatar — justified because it’s in the name of comedy; she, however, doesn’t “enjoy LD’s smug rich white man bullshit. I associate him with his followers who are basically richer, older Joe Rogan fans IMO.”

Brooke, 29, had a similar experience. “I dated a dude on-and-off for two and a half years,” she tells me. “He loved Curb Your Enthusiasm, and he was a shitty person, haha.” He was “raised Catholic” but had turned “hardcore white-male-Reddit atheist” by the time they got together.

That’s more or less the case, too, for Liz, 29, who describes her boyfriend Shawn as a “superfan” of Seinfeld who has seen “every episode a billion times — it’s all he ever wants to watch.” That’s not necessarily a complaint; she’s happy to watch his favorite show with him. But, she says, “The only thing he does that bothers me is sometimes he’ll say something funny from the show and then be like, ‘That was from Seinfeld,’ and I’m like, ‘I know! That’s why I laughed!’ It’s like he’s positioned himself as the gatekeeper of Larry David knowledge.” His assumption that she doesn’t know what he’s talking about, according to Liz, is contained to this one topic: “[It’s] literally only Larry David.”

Before all of this, I already had my own theory about the Larry David Guy. In an episode of How I Met Your Mother, protagonist Ted (neurotic, lovestruck New Yorker) uses the movie Annie Hall as a litmus test for potential girlfriends; if she likes it, she’s cool enough to stay, and she probably won’t be scared off by the fact that Ted is a lot like Woody Allen’s character. I figured Hinge kind of works the same way: These guys were putting Larry David on their profiles to weed out the women who don’t get his humor, and to subtly insinuate that they share many of his same qualities: intellect, success, perhaps Jewish to some degree, a sense of humor on the edgier side, etc.

It was, or at least it seemed like, a distinctly hetero male point-of-view. And so, I wasn’t prepared to discover that many Larry David Guys… are women?

Reed, 33, tells me that he’s seen “a bunch” of profiles of female Hinge users who answer “Larry David” to the prompt “my spirit animal is.” Alex, 31, sees the exact same thing, and often enough that it’s boring: “It does feel at this point like an ‘I love The Office’-level basic thing. ‘I’m just like Larry David!’ reads like ‘I have experienced awkward situations!’”

Chloe, 25, sends me a video of her female roommate and best friend dressed as David for Halloween 2019 singing along to Whitney Houston’s “I Wanna Dance With Somebody,” then declaring the song “pretty… pretty… pretty good.” Chloe’s roommate, who isn’t Jewish, has never seen Seinfeld and only started liking David in the last year. I ask Chloe if David’s regular SNL appearances as Bernie Sanders might have sparked the sudden interest, to which she responds, “That may have fueled it, but I think somebody told her to watch Curb and she just dove in. She watched all the previous seasons very quickly. And she was a Warren voter until like two months ago, but now she’s all-in on Bernie, so maybe it’s all related.”

Carly, 26, had a more traditional introduction to the David canon. The daughter of NYC Jews, she grew up on Seinfeld reruns. “Jerry/Larry is the only thing my extended family can agree on, and we communicate mostly through Seinfeld and Curb references. It’s a humor that feels like being in my house: It’s very culturally Jewish. Not suffering fools was a big part of my upbringing (for better or worse).” She adds, however, “Unfortunately, I do feel like a lot of Larry fans out there (read: a lot of male fans) use it as a calling card to just mean ‘LOL, I’m an asshole.’”

If anyone I speak with is an asshole, I don’t notice, but Larry David Guys are definitely confident in their taste. “I will tell anybody who will listen to me that Curb Your Enthusiasm is the GOAT comedy series, and you’re missing out if you haven’t seen it,” says Cody, a 25-year-old agnostic. “I’m a big fan of other comedy series like The Office and Arrested Development, but Curb is easily my favorite. I’m so glad that Larry has decided to come back and make more episodes after that almost 10-year break. It makes my Sunday nights feel good again.”

When l ask if he’d date someone who hates David or didn’t think he was funny, he replies, “This question made me laugh because I’m dating someone now who doesn’t find him as funny as I do, but I just think it’s because she hasn’t given the show a fair chance. It upsets me that when something happens in our real lives, and I have the perfect Curb reference to drop, she won’t truly appreciate how funny it was or how perfectly applicable it was to the situation. That’s tough, but we’re working through it, and sometimes she’ll watch some of the new episodes on Sunday nights and I can hear her giggling. I think she tries to hide it because she knows how satisfying it will be to me if I hear her laugh at the show.”

Cody’s girlfriend’s unwillingness to satisfy him notwithstanding, the deepest insight I get into the mind of the Larry David Guy is from Phil, 29, a pseudonymous lawyer by day, comedian by night living who I know from Jewish summer camp. “I study it like the Torah,” he jokes. “First of all, what’s cool about both Curb and Seinfeld is they operate in an Old Testament universe — or karma, whatever it is. But any wrong done will come back on the character. There’s no forgiveness from a higher power in there. [David] will do something wrong in one storyline, and it’ll come back to bite [him] in another.”

For Phil, Curb and Seinfeld fall into a category he calls “male existentialism,” which also includes the work of Louis C.K., Woody Allen and Howard Stern. “The stories are like a mirror to how your everyday life is — meaning you encounter a problem in the real world and then you discuss it with your friends and come up with a strategy. Then you go out and deal with the problem again. And then you come back to your friends again and discuss it once more and deal with the strategy. That’s why everyone can relate to Seinfeld so much. That’s all life is — you encounter problems, and then you discuss them with your friends.”

By pure coincidence, I have a first date a few hours after I talk to Phil. The guy and I quickly fall into those half-baked arguments you have on first dates, talking about hypothetical ideas so you don’t have to talk about your lives — e.g., “What happens after you die?” and “Under what circumstances do you give up your seat on the subway?” I think it’s going well, but he has to end the night early; he’d left his keys inside his apartment and had to get back to Brooklyn before his landlord fell asleep or he’d be on the street all night. I could swear this was an episode of… something.

Then came social distancing. No more dates, and without the possibility of a date, no more dating apps. Suddenly, the national conversation turned to the ins-and-outs of hand-washing, how there are too many people at the grocery store and what are we doing with all this toilet paper? We started avoiding crowds. Stopped shaking hands. Purell-ed everything. In other words, I didn’t get to see Date Guy again. I knew from social media he was staying in his apartment, like I was staying in mine, eavesdropping on my roommates to keep track of whether or not they were coughing — or worse, planning to go out. But there was no use in reaching out to him since we couldn’t meet up anyway.

I did, though, promise myself that when the pandemic was over and I was back on Hinge, I’d start matching with Larry David Guys. They didn’t seem so bad. And as I obsessively Lysol-wiped my doorknob because I didn’t trust anyone else to be quite as careful or particular as me, I had to admit: I get it now. 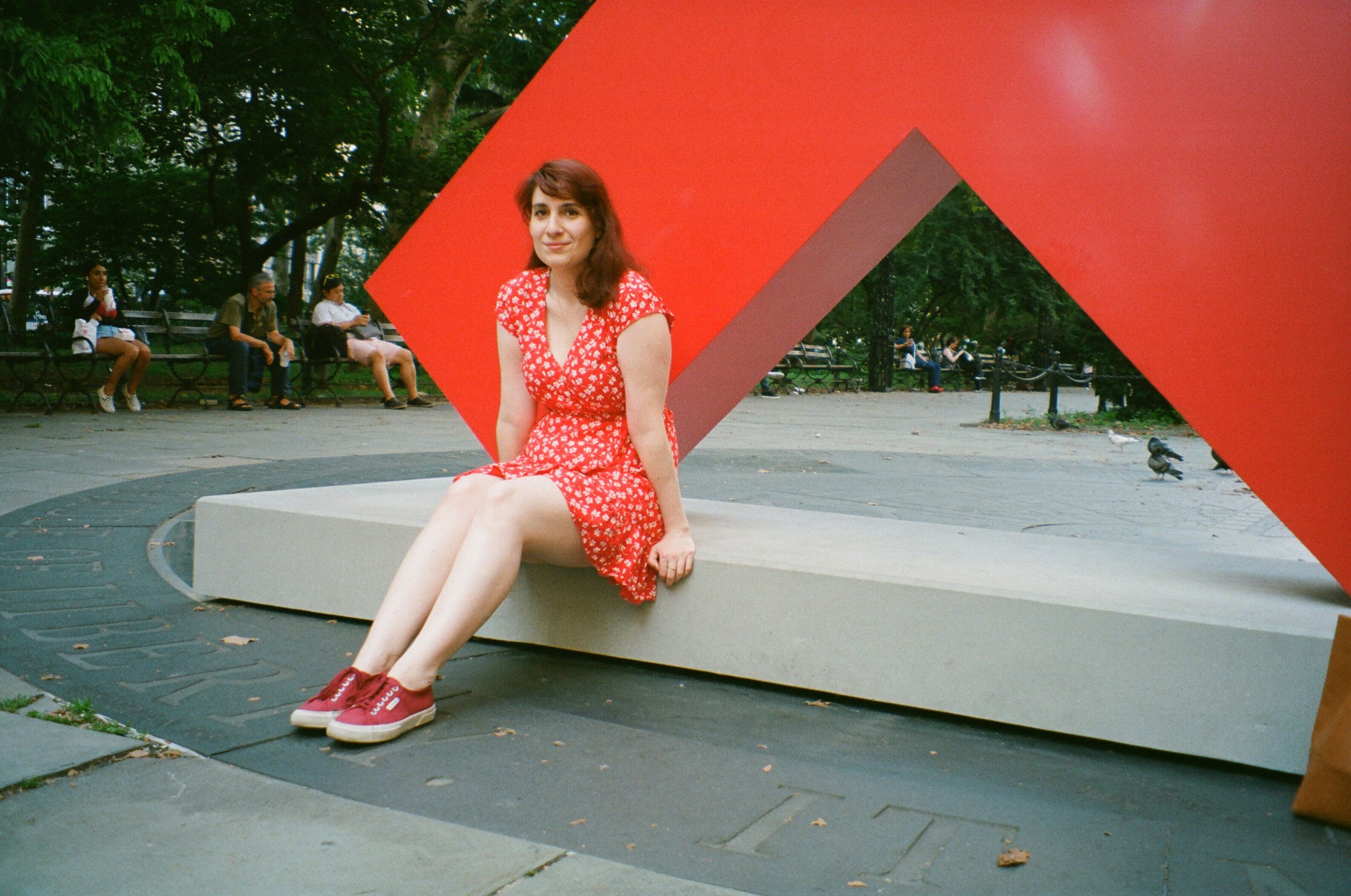 Lizzie Logan was recently an assistant at Netflix’s The Break With Michelle Wolf. Her comedy writing has been published on Reductress, McSweeney’s and The Huffington Post. She was previously a pop culture writer for Glamour magazine, and her reporting has appeared on Splitsider, Vulture and W.