Is My Aquarius Dog Gonna Be An Icy Bitch?

And: How do I support my Leo partner organize her various career endeavors?

I’ve been told so many times that most straight men don’t (or won’t) believe in astrology. And yet, the more I yap about it to the guys around me, the more interested they seem to become. So this column is dedicated to those dudes: The suspicious and the curious, the skeptical and the inquisitive. I’ll be here every week, tackling the stuff your basic-ass horoscopes will never get into. Because you know what? You might think astrology is esoteric snake-oil, but everyone around you still judges you based on your star sign.

Do star signs translate to animals? Like, if I get a dog born in one sign rather than another, is it going to turn out to be an asshole? — Nick L., Virgo
No. Lol.

Rather than focusing on your pet’s sign, you should look at your own sign and chart, as that will be more important in this situation. Your fifth and sixth houses — the areas of the chart that show how you nurture your “young ones” and how responsible you are in general — should give you a clue as to how capable you’ll be of caring for a pet.

To do so, you’ll need to calculate your entire birth chart, which you can do here for free. In the meantime, though, let’s use a sample chart: 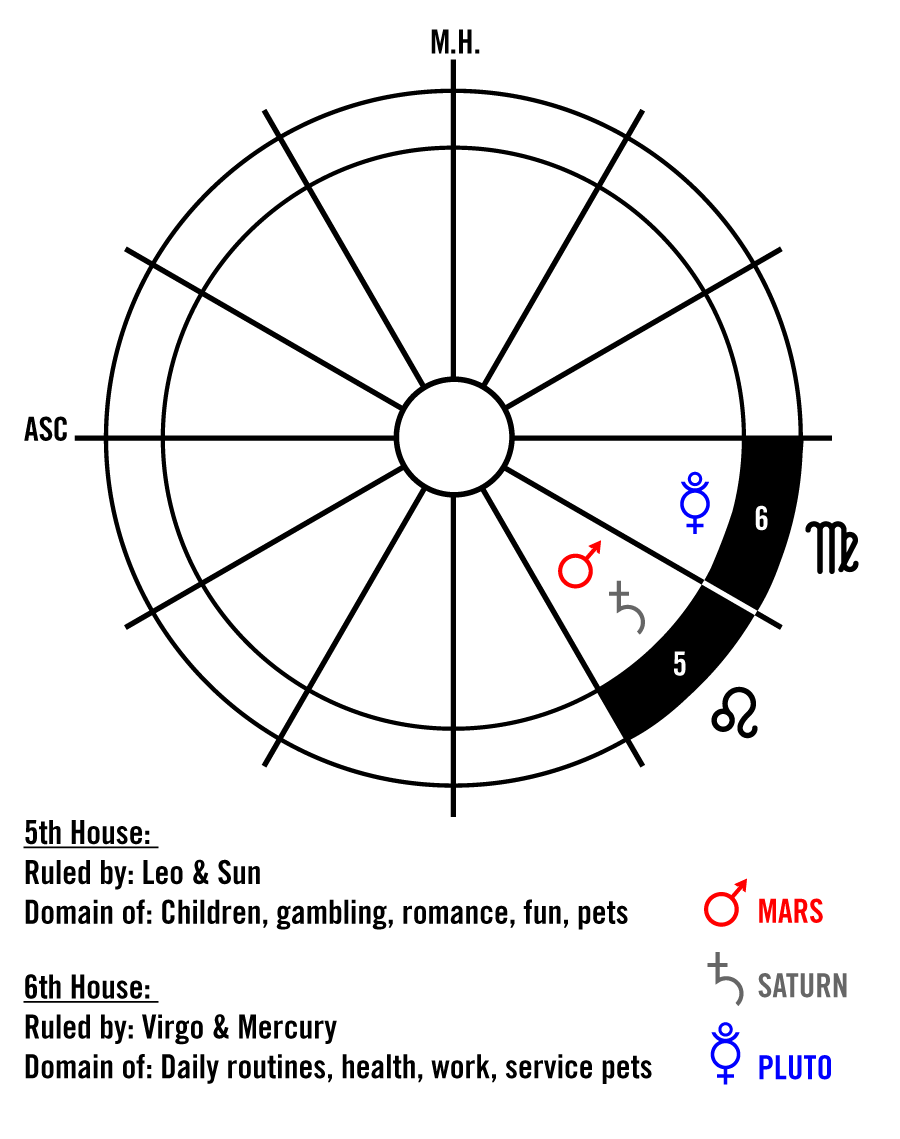 The fifth house rules children and entertainment (I added pets here as well, since they typically provide us with entertainment, too), and the sixth house rules daily routines (washing the dishes, taking out the trash, driving to work, picking up dog shit, etc.) and service pets/animals. So as in the above example, say you have Leo on the cusp of your fifth house and Virgo on the cusp of your sixth house — everyone’s chart is different, so if you’re not an Aries rising, these won’t be the signs on your fifth and sixth house cusps — you’re probably really good with pets since Leo and Virgo are the natural rulers of that space, and the expression of those energies are fluid and natural.

If, however, you have one or more malefic planets in those houses (Mars, Saturn, Pluto), which cause strife and make things more challenging, there will be some tension with regard to how easy it will be to handle a potentially irritating pet.

All in all, I’d say skip the stars and go with your gut on this one.

My amazingly talented Leo partner is in the midst of several artistic projects and sometimes feels like she’ll never be able to finish them all. I always tell her she’s doing fantastic work — because she is! — and that she won’t be lost in the woods forever. But I suspect my supportiveness is a bit beside the point for her if she can’t feel confident in herself. How do I let her know she’s on the right track? — Miles K., Pisces
First of all, it’s awesome that your girlfriend has a creatively supportive partner. Hats off to you. Second, since your girlfriend is a Leo, being confident and satisfied with her creative output is crucial for her vitality and overall energy levels. It may be beneficial then to talk to her about which of her projects she feels most confident about/attached to so you can help her stay on track and complete one thing at a time. Leos also need accolades for the work they produce, and thrive on positive yet honest feedback. So keep that coming, too.

Leo is a fixed sign, which means working on multiple projects at the same time isn’t typically their strong suit (unless there are other things in their chart that indicate otherwise — like Gemini placements, as they’re the jugglers of the Zodiac). Therefore, her efforts would be best targeted toward working on a single project and bringing that project to completion before starting anything else. Even if she’s not happy with the outcome (Leos are very, very, VERY hard on themselves), she will have at least checked something off of her list and can feel accomplished in that way.

Now, as a Pisces, I know your nature is understanding and compassionate, but you don’t want to lead her further down this not-so-productive wormhole, because if she starts to feel like you’ve just been pacifying her, she’ll probably claw your eyes out. And that’s not gonna make for a comfortable Friday night.

Write to me! Because dude, I’m more than happy to tell you what your sign means w/r/t whatever is happening in your bedroom, with your friends and family or your job/office. Hmu at erin.taj@melindustries.com.