In Tunisia, Men Hunt for Random Numbers — Hoping to Fall in Love With the Women They Belong To

Where Tinder is taboo, Tunisian men have a strange underground system for landing dates

One evening not that long ago, my phone lit up with a string of calls from an unknown number. I finally answered: male voice, wrong number. He called four more times and then sent a text message. “Is this Moenem?” it read.

“I’m not Moenem,” I responded.

I want to be friends.
I’m not a bad person.
Why aren’t you answering me?
We can get to know each other little by little.

I walked next door to tell my flatmate Amel, a 26-year-old assistant theater director. She nodded, her eyes rolling. “Yes, it’s a phenomenon [in Tunisia], they call you and say, ‘I thought you were someone else,’” she explained. Amel has had 10 or so of these calls. Sometimes they’re more inventive, she added, like one guy who tried to keep her on the phone by saying that he had “found some treasure” and wanted to show her it.

My caller wasn’t creative. Even though I didn’t respond to his texts, he messaged me every day for a week, often simply only writing, “bonjour,” “bonsoir” or “bn” (which is probably short for “bonne nuit,” which means goodnight in French but can also stand for “barra nayek,” which means fuck you in Tunisian). After a while, intrigued, I asked who he was. He introduced himself as Hichem, a 24-year-old policeman from the coastal town of Sousse. We exchanged a few banal pleasantries (“how are you?,” etc.), and he sent photos via the imo messaging app: three pouty, windswept selfies, all taken at different angles and all featuring the same red velvet blazer. “He’s good looking,” Amel remarked when she saw his tousled hair, good cheekbones and beard. “They must be fake photos.”

This may seem like a DIY Tinder, but some North African cold callers are finding smart new ways to get numbers. One Arabic language video by YouTuber Mounir Tech shows you “how to find numbers right now for young men or women in your country” using the Friend search tool app. You specify the target country, gender and how many numbers you want, and then the app searches through WhatsApp-connected phones and generates a list. On the tutorial, 50 numbers of women from Morocco are generated on screen.

When I asked Hichem directly how he came across my number, he started out cryptically. “I will tell you how, but you need to promise that you will speak with me,” he texted. (My Tunisian number isn’t connected to WhatsApp, so he couldn’t have found me using Tech’s method.) I didn’t, though, want to make any promises to an unknown caller, which Hichem didn’t appreciate. “You know, this could be simple but you are complicating the situation by refusing,” he responded. (In the end, he offered, “I phoned a friend but I mistyped the number. Do you believe me?”)

Women are cold-calling too, and they seem to follow a similar pattern. “Sometimes they’re to the point — they say they love and adore me, even though they don’t know me,” says Ahmed, a 30-year-old beach tennis enthusiast who’s currently unemployed. “Some are looking for a way to pass the time; others are single and unable to meet people in real life.” For his part, Ahmed doesn’t find it strange: “It’s something to do with the collision of human nature, the religious tradition and traditions in general.”

Shereen El Feki, author of Sex and the Citadel: Intimate Life in a Changing Arab World, says that this method is often used because it’s indirect and out of the public gaze. “You have to do this a bit furtively, because this generation is hemmed in by constraints of what’s visibly acceptable,” she explains. “[Tunis] is a very open cosmopolitan city to a certain extent but you can still see the gender segregation. And Tunisia isn’t just Tunis, there are still rural populations and more traditional populations.”

To Ahmed’s point, it’s also a collision of old and new. That is, increased connectivity creates new ways to find friends and lovers that you wouldn’t be able to meet otherwise. It can happen via cold-calling (such as with Hichem), by scanning for nearby Bluetooth-connected devices (such as El Feki experienced in a Cairo cafe) or a straightforward(ish) DM on Twitter (such as those sent by South Asian men looking for “fraandship”).

As for my interactions with Hichem, as I got to know him, less and less of his story checked out. For example, it turned out he wasn’t a policeman, though he wanted to be one. He next claimed that he was a student, retaking his science baccalaureate (high school final exams that, in Tunisia, it’s common for people in their mid-20s — and even older — to take). This was a half lie: He was enrolled, but had dropped out for a third time.

One thing was certain — Hichem felt stuck in a rut in Sousse, one of Tunisia’s more affluent towns known for its popular beach resorts. He came to particularly hate it after having lost “a love story” (i.e., a bad breakup) and contact with his friends when he started failing his studies. “I was from a poor family,” he once texted, always preferring to speak in English, which he said he learned from casual work in the tourism industry before it took a dive when a Sousse hotel was hit by a terrorist attack in 2015. “I work without thinking about my studies — trading and farming of sheep and olive trees.”

He went on to tell me that meeting someone from another town or country was a way for him to explore. “There is no Sousse or Bizerte [Tunisia’s northernmost town, where he thought I was from]. We are all Tunisia, I want to move and know people. I want to travel.” He added, “I have had one Australia experience over the phone.”

He, of course, wanted to know if I was married. I said no and asked him if he was looking to get married. He said that marriage is very difficult right now because “there are not any girls that you would want to marry.”

Many girls on the other end of the line obviously feel the same way about their callers. Amina, a dentist from southern Tunisia, says that she and her friends receive calls but don’t entertain them: “Generally the person on the phone is a person with no work, nothing to do — it’s not a man to marry.”

“There’s been a shift in how you find your [partner] in most of the Arab region,” said El Feki. “The rate of consanguineous marriage has fallen dramatically, and so, that’s showing the lessening influence of the family. The general pattern is that you meet someone at school or university, or you’re introduced by friends or neighbors. [But] if you don’t have a job and you’re hanging around all day, what are your prospects?”

Tinder has gained some traction in the country, although Hichem had never heard of it. Again, marriage is central. “I thought it was an app for quick encounters, that we don’t need to know much about the life of the other person,” says Ahmed, the beach tennis player. “But in Tunisia, people use it to find a marriage partner. Some start speaking to you about marriage straight away.”

As such, these cold calls can sometimes result in marriage. But the cover afforded by this dating method can also leave people open to deception. One 28-year-old woman from Touza, who we will call Sara, stayed on the phone for seven years with a man who called himself Mohamed. At first she didn’t pay too much attention to him but replied every now and again out of boredom. Then she was kept back a year at school, and while all of her friends moved on, having Mohamed “filled a void.”

Eventually, she gave him an ultimatum. “My family had found me someone to marry, and I told him either you come and show yourself and meet my family, or I will accept to marry this other guy,” she says. He told her he loved her, and they set a date; her parents prepared the house and made a big dinner to properly welcome him. But he didn’t show up and stopped answering his phone. Her father tracked him down through his mobile service provider — he was from a nearby town, married and had lied about his name.

In fairness, I, too, was benefiting from the anonymity of old-school text messages. I had told Hichem my name was Emna and that I was from Bizerte. In time, I feel sorta bad. I try to cut off the conversation, but he wants to meet me (and my family if I prefer). “I like to have you as my wife if you want. We will be happy,” he promises. Later, though, his tone changes completely: “I am starting to hate you. You’re an arrogant woman.” There are broken heart emojis and giant crying face emojis.

After I officially tell him I’m not interested, he sticks to his story — that he called me by accident and just wanted this “coincidence to become a beautiful relationship.” Never one to be undeterred, though, he then asks if I’d be his girlfriend after hearing “the truth.” When that doesn’t work, he takes one last stab at asking me to send a photo of myself — a request he’s made multiple times a day. He tells me, again, that he isn’t a bad person. I assure him that I don’t think he’s a bad person and he responds, “Ok that’s good. I’m go now. Bye my best friend.”

But his farewell doesn’t last long. The next day, in fact, another “Bonjour!” pops up on my phone. And while he’s more or less stopped texting me — apart from the occasional “hello, I miss you” — I have missed calls on imo daily. 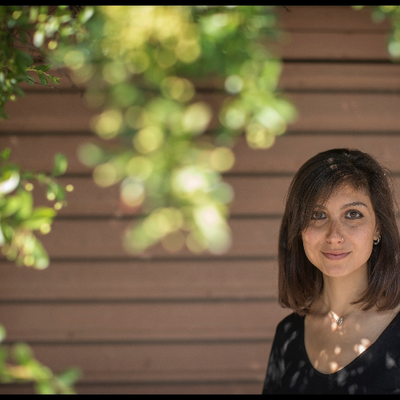 Layli Foroudi is a journalist, producer and illustrator, freelance in Tunisia.