What Happens When the Childhood Rival Turns Out to Be Way Cooler Than You?

In pop culture, you always get the last laugh. In real life, you Google your nemesis and she’s LITERALLY CURING CANCER

If there’s one thing I wholeheartedly “get,” it’s having a long-standing, petty vendetta. Recently, old tweets revealed someone had that very thing with presidential candidate Pete Buttigieg, and it made me faint. The tweets began in 2013, when Buttigieg was just the mayor of South Bend, Indiana, and they’re everything a grudge should be: childish, off-the-charts vindictive and about the smallest possible infractions imaginable. 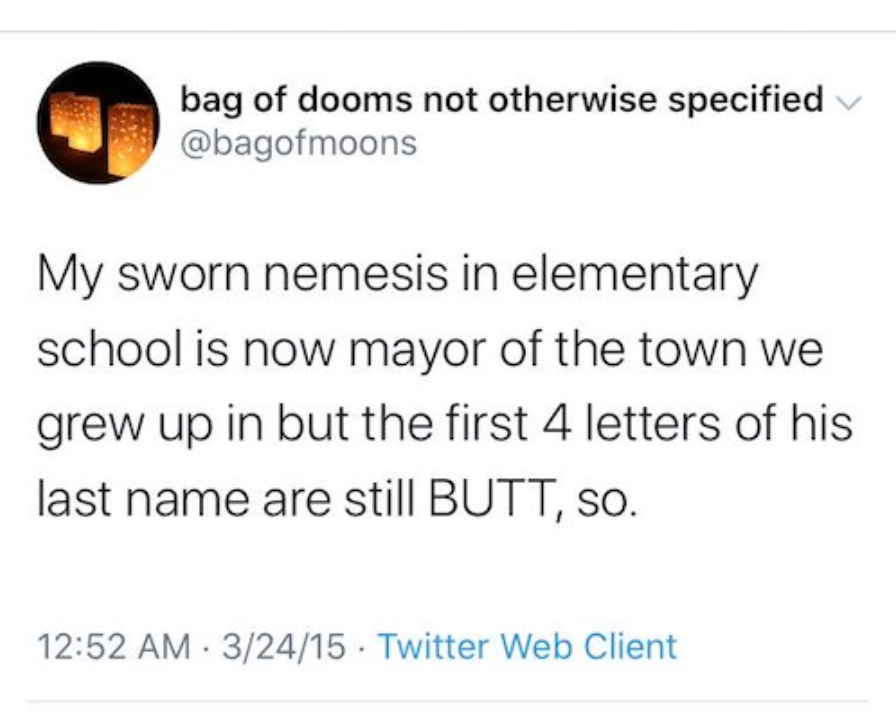 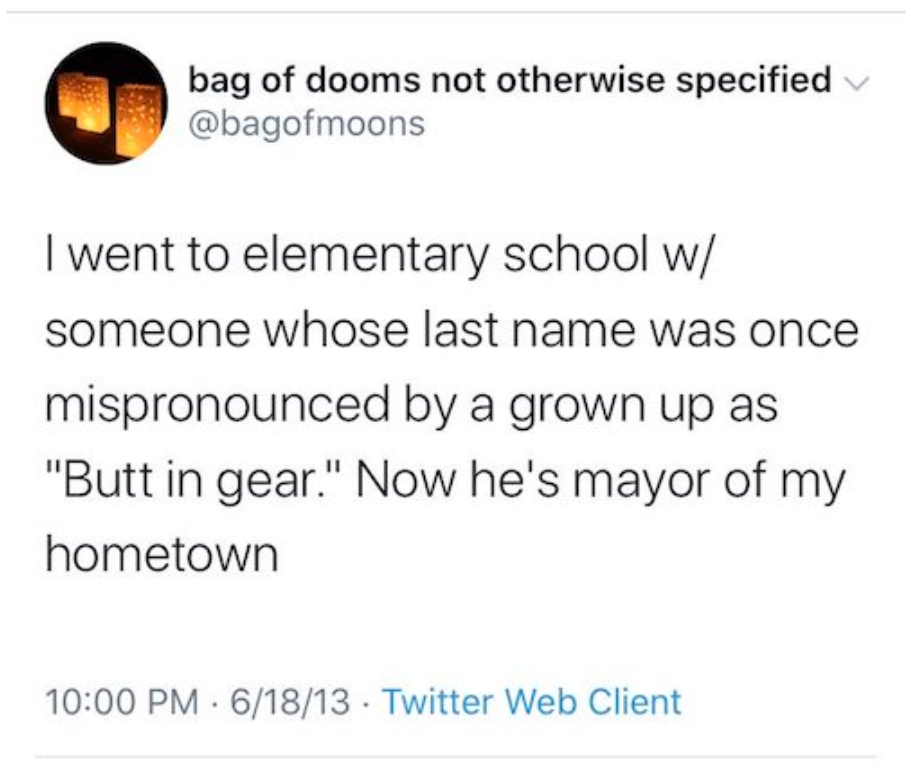 Things got even worse when she realized BUTT might run for president: 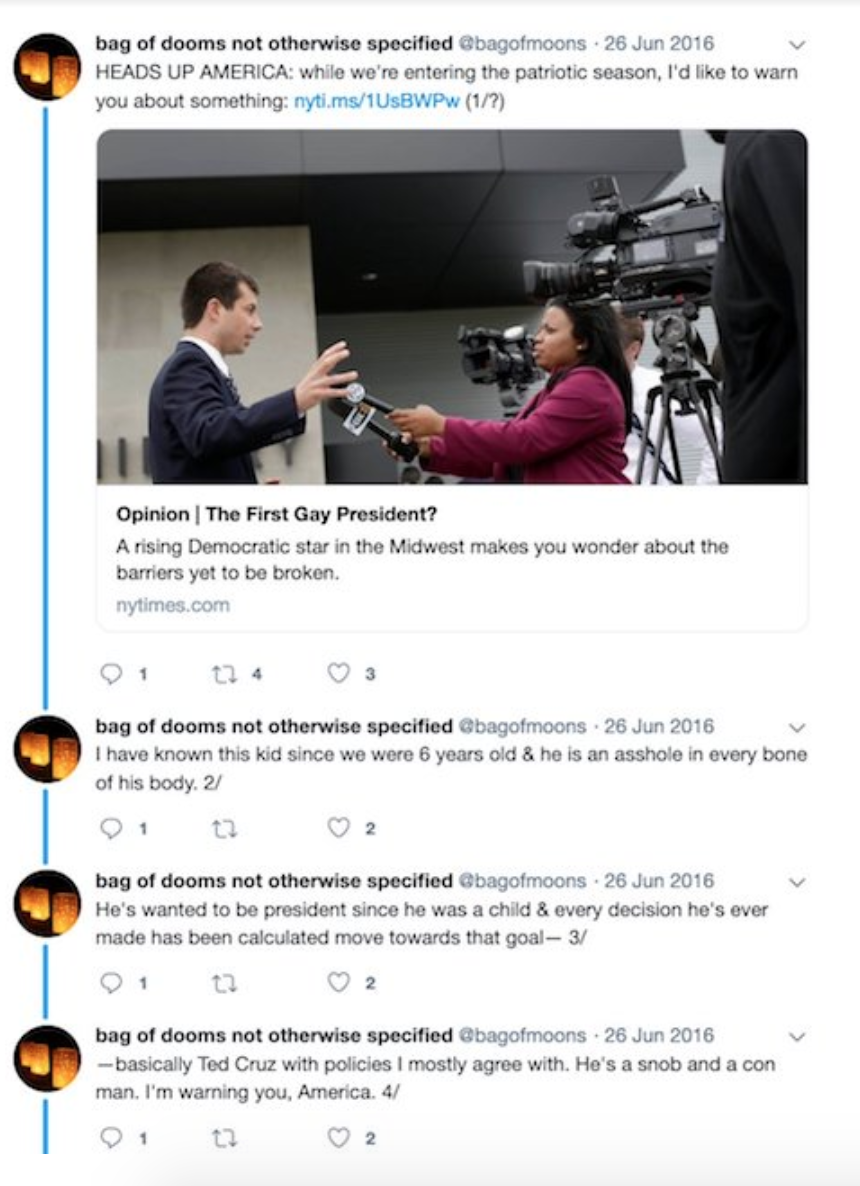 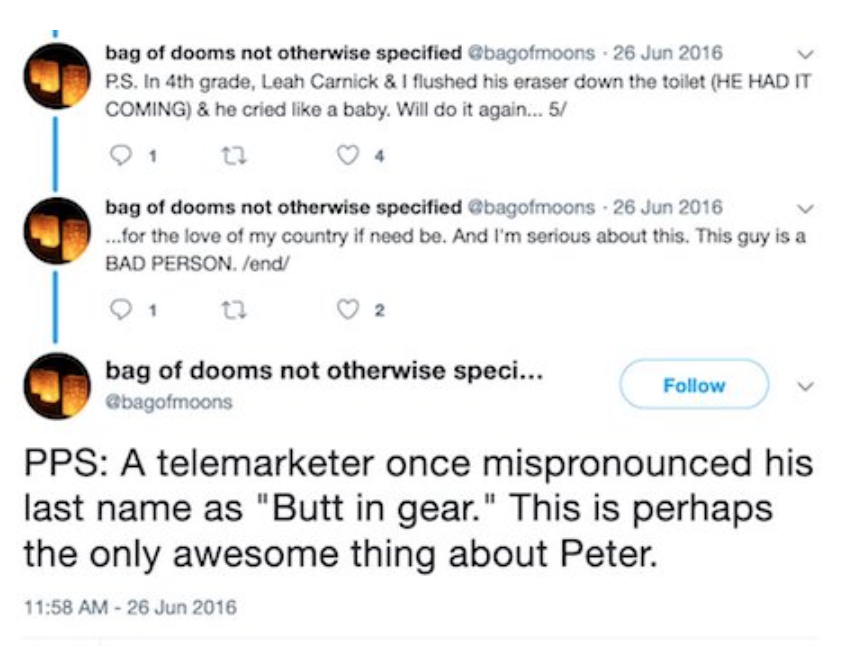 She’s a woman after my own heart, because I had a nerdy childhood rival, too. My mom moved after every breakup, so needless to say, we moved a lot when I was a kid. The one thing you learn when you’re a chronic new kid is to never befriend the first fucking nerd who approaches you. But unfortunately, when I moved from Florida to Queens in elementary school, the change was so extreme, I had no choice but to befriend the initial quiet, studious girl who took an interest in me.

We quickly became the two smartypants in class, constantly vying to be the teacher’s pet, but I was just Florida trash enough to stand up to the taunting we received. Case in point: When she brought a feces sample in for her science fair project, I vigorously defended her integrity. “It’s from the doctor,” I said angrily in my Jacksonville twang. “It’s not like it’s her poop.” (I’ll be the first to admit I made things unintentionally more hilarious.)

But I soon began to feel like she was dragging me down. I was funny and knew a lot about sex from my mother. And so, I began to use my hot mom’s hijinks to make friends with the cool kids until I was firmly entrenched with the elementary school delinquents, happily leaving my nerd friend and her shit samples behind.

One day she came up to me at recess, and we were kind of awkwardly silent, until she finally said, “You know when you first moved here, I was worried that I had competition to be the smartest kid in class. But I’m not worried anymore.” I’ve honestly never felt more owned. I resented her, but it also lit a fire inside of me to prove I could be smart (and a smart-ass), too.

Now, fast-forward to today. Imagine my surprise when — all smug about my rather large presence on social media — I typed her name into Google to discover that she has a fucking Wikipedia page. Each achievement is a harder punch in the face than the last: Supreme Court Clerk. Harvard Law Professor. Writer for the Atlantic and the New Yorker. (I did take solace in her first failed marriage.)

The childhood rival is a staple trope of pop culture for good reason — it’s a compelling relationship that can affect you even more than your familial ones. I know that at least when my rival owned me, it sunk in more than when a parental figure or guidance counselor told me I wasn’t living up to my potential. Even though I hated her, deep down I knew she was right; I was acting like a fucking idiot.

Gaby, a 31-year-old in L.A., had a similarly disheartening Google reveal about her childhood rival. “This girl gave me so much anxiety and nitpicked everything I did because she felt I was ‘weird.’ One time, I tried to work it out with her and communicate our differences, and she cornered me in a bathroom and screamed at me something along the lines of ‘why can’t you be normal?!?!’ We were both very smart and in honors classes together, and it was a very competitive environment. Anyway, I Googled her five years ago, and she literally works to cure cancer; there were articles about it lauding her. I was hoping she was a failure because of the narrative that the mean girls stay in your hometown and are miserable, but nope! She’s curing cancer.”

Of course, not all childhood rivals turn out to be successful. The most petty victory is finding out that they’re much, much worse off than you could ever have predicted. James, a 25 year-old from Oklahoma, had a childhood enemy that used to ditch him for her popular friends. “The best way to describe her would be a mixture of Mrs. Trunchbull from Matilda and Regina George from Mean Girls. She once started a text rumor about me, I think it was that I fucked my mom? So we did the same to her, and said she had familial herpes, which was stupid high school shit. It was fitting when I found out she ended up in prison for child abuse. I wonder if she’s popular in there?”

Kristen, a 29-year-old in Nova Scotia was tormented by her childhood rival, who knew she was gay way before she even knew, but she eventually got some twisted revenge. “I found out he was in jail for robbing and assaulting an 80-year-old woman. He had been caught because she beat him unconscious with her cane! I also ended up dating his sister!” Another Canuck, 55-year-old Linda, learned of her childhood rival’s very Canadian ending. “I used to wish he’d die,” she says. “He was eventually mauled to death by a black bear in Algonquin Park. I thought I caused it, but I never felt guilty.”

I’ve thought about reaching out to my old friend. Maybe it would be a funny reunion, but the truth is, I know she hasn’t thought about me nearly as much as I’ve thought about her. At most, she remembers me as a one-time friend who cackled along with everyone else when the class bully asked her if she had bush and she matter of factly said, “No,” wiping the smile right of his fucking face. I was secretly in awe of her in that moment.

I’d like to think she’d be proud — if only she’d Google me.