Subspace and topspace aren’t just feelings — they’re science. And they’re every bit as good for your mental health as running, yoga and meditation.

It’s late at night, and I’m naked, blindfolded and cocooned by rope in a lover’s bedroom in East L.A. Arms bent at the elbows and wrists tied together above my head, I’m completely vulnerable and helpless in this position, sprawled atop a chair where I’ve been spanked, flogged, covered in clothespins and hit with a belt for close to an hour.

Yet even as my ass burns and turns red, I can’t help but feel relief. Bliss, even. I’m floating in a cloud of pain and pleasure, a dichotomous headspace of presence and dissociation where I’m totally in the moment, anticipating what my top will do to me, but also so high on what I’m feeling that I’m barely able to comprehend who I am. All my worries fade away, there’s no distinction between myself and the universe, and for the foreseeable future, all I have to care about is being a good girl for Daddy, the man who I’ve allowed to dominate me.

Most often, these feelings come about during what’s called a “scene,” the time and space in which a bottom and top play and where energy is exchanged and shared until practitioners find themselves in what often feels like their own world. And while there are distinct and well-documented neurological differences between what a submissive might feel in this moment of intense surrender — often called “subspace” — and what a top experiences when they’re focused and in control — often called “topspace” or “domspace” — these non-permanent states of consciousness have benefits for both parties involved; ones that can often extend far outside the scene and into daily life.

Elaina Ryan, a pseudonymous NYC-based BDSM practitioner of over nine years who identifies as a “switch” (someone who both tops and bottoms and explores both submission and dominance), explains that when she’s bottoming, she feels a flow of energy between her and her dominant — a fiery connection that intensifies as the scene gets more and more heated. She’s able to lose track of reality in a way that allows her to forget her everyday, a feeling of the weight of the world lifting off her shoulders that allows her mind and body to relax so deeply that she can feel the calming and grounding effects for anywhere from hours to days later.

“[Subspace] is this mindset where you completely surrender,” she says. “The surrendering of your body, the surrendering of your pride, the surrendering of all these energies that you have ends up feeling empowering. When I’m in it, it’s like nothing else matters around me. It’s a very intimate, full presence. Past and future aren’t there, only the present moment is. It’s almost like I’ve gotten hypnotized into the energy of my dominant partner. From that point on, they make all the choices, which is maybe the biggest thing I love.”

Take meditation, for example — the Mayo Clinic describes it as a “mind-body complementary exercise” that can produce a sense of intense presence, tranquility and relaxation in the body and mind that allows the world around you to fade away. Just like in subspace, there are no choices to make in a meditative state, nothing to follow except your own breath and nothing to attune to except to whatever is happening in the present moment. Their benefits overlap, too — both meditation and subspace have been shown to reduce stress, control anxiety, enhance new perspectives and increase self-awareness, creativity, patience and tolerance. Kinky or not, it’s safe to say they’re almost exactly the same thing — it’s just that one of them involves deep breathing and the other’s got gimp masks and ball gags.

Here’s why that matters: When the color “red” is written in red that’s easy, but when “red” is written in green, that takes a little bit more executive function to label correctly. If the test results were the same for both doms and subs before and after a scene, that would mean no change to their cognition or consciousness had occurred. If their test results were different, however, that could mean something happened to them during the scene to affect their performance. What Sagarin found supported the latter idea — as per the stroop test results, the executive functioning of both doms and subs did change after the scene… just in entirely different ways.

The area of the brain where blood flow and activity is decreased is called the dorsolateral prefrontal cortex, a structure that houses our sense of self and controls many of our executive functions. It’s because of this lack of blood flow and neuronal signaling that marathon runners and kinksters will find themselves in an altered state of consciousness; one that’s usually described as dreamy and pleasurable.

What Sagarin and his team found was consistent with the transient hypofrontality hypothesis. Bottoms and tops performed well on the stroop test before the scene, as expected. But after the scene was done, some tops actually performed better, while most bottoms got substantially worse. This, he explains, is indirect evidence of subspace. “We’ve also done some research where we ask people to describe this type of altered state and we do get these descriptions of a kind of dreamy, floaty, pleasurable feeling,” Sagarin says. “People lose the distinction between themselves and their partner, between themselves and the universe. This is what we think subspace is — that people’s executive function capabilities get temporarily reduced and one of the pleasurable side effects of that is the altered state that people find themselves in.”

While some may prefer a more traditional route to this state of consciousness, like by running a marathon or hot yoga, the fact still stands that altered states of consciousness can actually be incredibly beneficial in the long run. According to Science Focus magazine, some of the long-term effects of this headspace include “a renewed sense of wonder,” a greater openness to new experiences and better connectedness with nature and other people. And, as an article in the Journal of Positive Sexuality found, those who access this subspace through kink can also benefit from a “reduction of physical and psychological stress” and a “feeling of heightened intimacy between partners.”

Topspace, on the other hand, is an entirely different animal. Rather than coaxing practitioners into a state of dreamlike bliss or a sort of melting, mediative dissociation, the altered state Dominants or tops experience is characterized by intense focus, presence and attentiveness; feelings that are often described as being “in the zone” or “firing on all cylinders.” As I mentioned earlier, in contrast to subspace, topspace can actually enhance cognition, so much so that many tops actually did better on Sagarin’s stroop tests after their scenes than before them. That’s probably a good thing, he notes — tops need technical acuity, focus and heightened attention to their sub’s body language and needs in order to use their tools and toys safely.

Goddess Sydney is a professional Dominatrix based in San Diego who works mostly with men to “help them understand the art of female dominance,” and how worshipping women can “bring joy and pleasure to their lives.” She does this through methods like corporal punishment, role play and psychological manipulation, all of which fall under the umbrella of consensual power exchange. “They want their power taken away,” she says. “They don’t want to think, they don’t want to make a choice; they want to be objectified or dehumanized. I do a lot of ‘ego destruction,’ as I call it. I like to knock people off their high horse. Most of my clientele are lawyers, doctors, judges, military police — very highly masculine, dominant roles where they’re required to make decisions all day, every day. So they want some release from the tough decisions they’ve had to make. That’s when other things are employed to allow some sort of psychosomatic release to happen.”

And how does initiating that release make her feel? Goddess Sydney explains the feeling of topspace as almost godlike — not necessarily thinking you’re the most divine thing in the world, but a sense of completeness, of being totally seen and understood. With the consent to take over someone’s will, there’s also a sense of being “absolute,” and a rush of focus-enhancing dopamine that accompanies it.

“As a woman, oftentimes everything you do is questioned or belittled or not taken seriously,” she explains. “But as a dom, when I’m in topspace, everything I say goes. It’s not questioned; it’s not laughed at. It’s very clear that I’m in power, that what I want is going to happen. I feel like things are flowing as they should, and that’s kind of what I see. I really do see, in my third eye, a flow of energy coming out of me into the sub, and coming back, like they’re feeding off of what I’m giving to them. I feel, at that point, like I’m nutrition for them.”

And just like there’s a scientific explanation for what subs feel during an intense scene, there’s also one for what tops like Goddess Sydney experience as well. It’s called “flow.” “‘Flow’ is an altered state that occurs when people are performing a task that’s challenging, or when they have the skills to beat that challenge,” explains Sagarin. “It’s like the rest of the world fades away and you’re completely focused on the task at hand. This has been looked at in professional athletes, musicians, computer programmers, all kinds of people.” Benefits of flow states can include a sense of clarity, increased concentration, happiness and a feeling of having no obstacles between you and your goals.

Still, one question remains: Is there a single kinky activity that triggers these altered states more than others?

For Ryan, subspace is activated by acts of submission like being “forced” to take off her panties in the bathroom in a restaurant and then handing them to her Dom, or being collared (a ritual that shows the dominant partner has ownership over the submissive partner for the duration the collar is on) and led on a leash. For others, myself included, it may be the the mix of an established power dynamic and the honorifics that come with it (so calling someone something like Goddess, Daddy, Mommy, Sir, etc.) as well as pain and impact play, like in a scene when I was a naughty schoolgirl who was getting 100 over-the-knee spanks as punishment.

As for the science behind all of this, it’s safe to say that as kink becomes more mainstream, additional researchers will hear the perverted call to study its effects on the brain. Until then, we’ll have to figure it out for ourselves, by learning what turns us on, what hurts so good and what gets us feeling like we’re floating in a personal sea of divine deviance… Daddy. 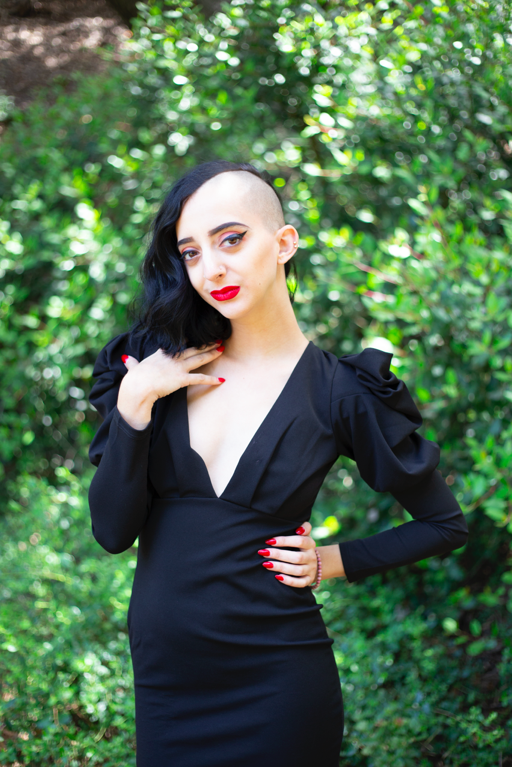 Gabriela Herstik is a writer, fashion alchemist and sex witch in L.A. whose work revolves around the intersection of sexuality, magick and glamour. She is the author of 'Inner Witch: A Modern Guide to the Ancient Craft' and the forthcoming 'Bewitching the Elements: A Guide to Empowering Yourself Through Earth, Air, Fire, Water and Spirit.' She's also written for numerous other publications, including i-D, Glamour and NYLON.