Ever since man distilled his first liquor, he has been bedeviled by a single question: How do I combine this bitter liquor with the fatty broths I love?

What’s that? Man hasn’t ever tried to make a cocktail that features rich, meaty broths because that’s insane? Well, somebody tell Campbell’s, because their new line of “brothtails” seeks to answer precisely that question, in the most dismaying way imaginable. (Okay, I wrote that broth cocktails are nuts, but apparently they’re real enough to warrant coverage in Food & Wine. For the sake of preserving my will to live, let’s agree right now that brothtails are nuts and that we’re not on board with them.)

The Campbell’s Brothtails campaign is simple: Provide four free cocktail recipes (and accompanying hors d’oeuvres recipes) for delicious drinks that prominently feature broths from Campbell’s Canadian Ready to Use line. The idea may be straightforward, but its execution has left something to be desired, by which I mean these cocktails do not taste good. I should know — I tasted them for you.

Now, full disclosure: I was not able to test these brothtails using the Campbell’s Ready to Use broths as intended. These boxed soups aren’t sold in the U.S., and my Canadian soup mule totally burned me. I ended up consulting the broths’ ingredients lists and jerry-rigging my own versions at home with the help of such mixologically questionable additions as Thai chili paste and instant ramen seasoning packets.

That said, I’m no brothtail purist. I believe I had a representative enough brothtail experience, if only because I found few other brothtail experiences to compare mine to. The company’s official Instagram hashtag of #campbellsbrothtails is an unused wasteland, and the program’s media coverage primarily amounts to this press release-y notification.

Basically, I did exactly what I could do in a situation that called for such rare and specific broths: my best. I’ll let the results of my taste test speak for themselves.

My lab partner (i.e., my long-suffering boyfriend) and I started with this one because it seemed like the easiest. The thing is, it still wasn’t that easy. It appears that Campbell’s hired Halifax-based consulting mixologists The Clever Barkeep to devise these recipes, and the high-end bartending background shows in the fussiness of each preparation. Per the official recipe for the Thai Chicken Negroni, I was meant to “make the CAMPBELL’S® Thai Chicken Ice Cubes by pouring CAMPBELL’S® Thai Chicken Broth into ice molds and freezing.” Per my boyfriend watching me do this, “That doesn’t look good.” Indeed, it didn’t.

On top of being the simplest to prepare, this drink also seemed to have the advantage of containing the fewest disgusting ingredients. Three out of its four-star ingredients are just the regular, alcoholic ingredients in a Negroni (gin, Campari, sweet vermouth), plus the harmless addition of a little Thai broth. How bad could it be?

Boyfriend and I answered that question with our first sips, immediately making twin faces of unequivocal revulsion. “BITTER,” I remarked.

“It’s like a bitter Bloody Mary,” he offered through clenched teeth. Between the bitterness of the Campari and the milder bitterness of the red chili in the broth, this was one bitter drink. That was nothing compared to how it smelled, though. Usually when you rub an orange peel around the rim of a glass for a cocktail, you catch a lovely whiff of orange with each sip. Despite my having done the same thing here, we caught no lovely whiffs. Or as I wrote it in my notes, “My entire world has been reduced to the odor of broth.”

Still, a Negroni is bitter anyway, right? So we moved onto the next brothtail, still hoping for something we could have multiple sips of.

I’ve had drinks that combined pork and mezcal flavors, as I survived the epic bacon boom of the ‘10s. It’s a good combo — the saltiness and fattiness of the cured meat is a nice foil to the smokiness of the mezcal, and if the drink includes a spicy element, all the better. This wasn’t that. This was like if Willy Wonka was a bartender, and also evil, and probably armed and dangerous.

This was the first recipe that asked us to make a syrup from broth and sugar, a task that didn’t feel good to do. I mostly try to spend my life keeping things like sugar and pork broth apart, and the dissolution of the sugar looked sickly, as if the sugar was protesting its fate. I got some syrup on my knuckle and reflexively licked it off, and then immediately wished I hadn’t.

The good news is, this one didn’t taste bad at all — on the way down. But a moment after swallowing, when we still dared to feel pleasantly surprised by the palatability, it hit us: pork essence. “PORK,” I said, maintaining a similar line of commentary from the previous drink.

Boyfriend could make no response, engaged as he was in the act of coughing urgently.

By this point, we were both sweating profusely. Something about the meat we were chugging, maybe, or else we were experiencing early signs of organ failure. “What’s the next one?” I wheezed.

“You don’t want to do the next one yet,” my boyfriend said, so we moved on instead to the Pho Mango Bourbon Sour, which had the questionable honor of not being the brothtail I was dreading the most. If anything, I was actually looking forward to this one. I adore mango juice, and if I have to tolerate it in the company of “pho broth syrup,” so be it. We also enjoyed whipping the egg white into a foam for this drink. All four of these cocktails looked creepily identical despite containing so many differently colored ingredients, but at least the Pho Mango Bourbon Sour had a pretty egg whitecap on it.

What was interesting about this brothtail is that it didn’t taste meaningfully different from the last one to either of us. The recipe doesn’t call for nearly enough mango juice to put a dent in that broth taste, and I already had a film of broth coating my mouth. I had entered the dreaded broth-on-broth phase of this taste test, when earthly trappings fell away in all their insignificance to reveal broth as the only thing I could count on in this life.

This drink also has the distinction of being the fussiest. I’ve baked cakes that were less labor-intensive. I’m not convinced that all the froufrou additions to the pho syrup, like ginger and basil, make any difference to the final product’s taste. At the end of the day, all you’ll taste is broth.

Here we go. The Big Kahuna. The thing that I really, really didn’t want to taste. All three of these other combinations are odd, but still plausible if you squint hard enough. Maybe the heartiness and heat of a Thai chicken broth really could round out a Negroni. Maybe pork ramen broth would nicely cut the acidic brightness of a mezcal. Not this one. For me, funky mushrooms and sugary rum have no business sharing a zip code, much less a glass.

This cocktail calls for a full cup of mushroom broth to be mixed with sugar for its syrup. I kept reading and rereading the instructions, hoping I’d missed the part where they asked me to reserve most of this syrup. That part doesn’t exist. This is a cocktail which, whether by accident or for some unholy purpose, calls for a cup of mushroom syrup.

I saved this for the end because I hoped I’d be drunk enough to gloss over this rum drink’s mushroom taste. Meanwhile, I recorded my notes in video format so I wouldn’t have to type (by this point my hands were honest-to-God quivering). The results sound like a video made by a dying shipwreck victim moments before the dehydration claims him.

I say this neither to be hyperbolic nor for the clicks: This mushroom daiquiri is evil made flesh. Just about every religious tradition speaks to the presence of true evil on earth, sometimes embodied and sometimes not, but always a force to be combated and avoided. Please do yourself a favor: Combat and avoid this mushroom drink. Your body is a temple! I felt so sick after granting this stuff entry to my temple!

I was right, though — the mushroom daiquiri may have been the worst-worst, but all of these drinks were the worst. You can argue that I didn’t make them “Campbell’s style,” considering the broth substitutions at hand, but I’m confident that I got the gist. All the while, I kept wondering who these brothtail recipes were for. Wine moms looking for a hot new thrill? Persnickety, upwardly mobile millennials with a taste for artisanal cocktails? Broth-heads? Assholes doing a bit for journalism?

I don’t know. But I can tell you who it’s not for: me. Now if you’ll excuse me, I’m going to brush my teeth again. 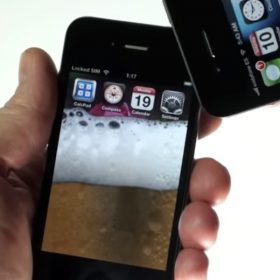 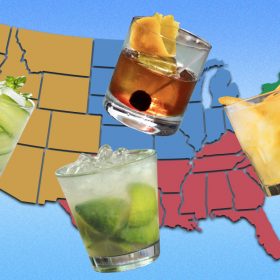 What’s Your Sip Code?: Here’s What Local Barflies Across the Country Drink